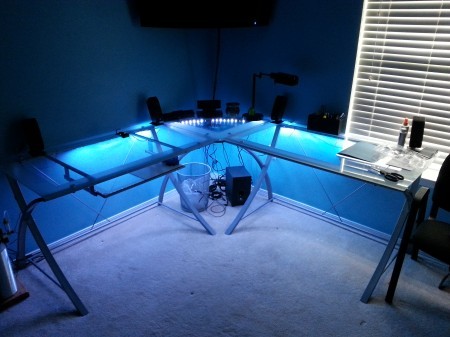 I was recently given the opportunity to complete a do-it-yourself project using Lighting Ever Flexible LED strips. I was originally going to use them as accent lighting for a bookshelf, but after seeing the design of the product I was working with, I had to change my mind. I ended up putting the LED lights underneath my glass computer desk to give it a nice, modern look.

I used one $25 package of Lighting Ever Flexible LED strips and a couple of zip ties to complete the entire project… Here’s my review of the LED lights:

When I first opened the package of LED lights, the first thing I noticed was the included instructions. At first they looked impressive, but after reading through them I was very confused. Not only did the wording seem awkward (almost as if it were translated to English from another language), but it showed cutting the LED strips, connecting two or more strips together, and how to connect the lights to the power source – most of which required separately-purchased parts that didn’t come with my kit. Overall, I found that the included “user guide” actually made my understanding of the product worse than it was before I even opened the package. 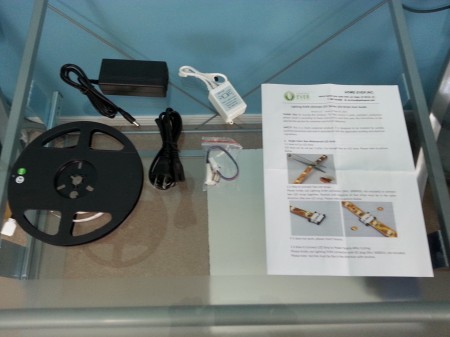 Aside from the issues with the included instructions, I didn’t have much of a problem finding out how to power on the lights. One end of the strip was already fitted with a connector that plugged into the white remote control box and ultimately the black power source. They could have made it simpler by having diagrams that actually corresponded with the product, but it didn’t require an advanced degree in electrical engineering for me to figure it out on my own. 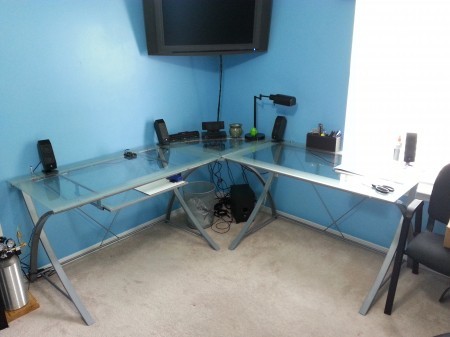 The project I was taking on involved my large glass desk that’s about 6 x 6 feet in an L-shape. Because the United States hasn’t caught on to the metric system yet, I had to calculate and convert to see how much 2.5 meters was going to cover. I needed it to cover about 130 inches, but 2.5 meters is only 98 inches. I did the best I could to center the strip along the back side of the desk, leaving space on each end to accommodate for the shortness. In the end it turned out to look okay even though it was 32 inches short. 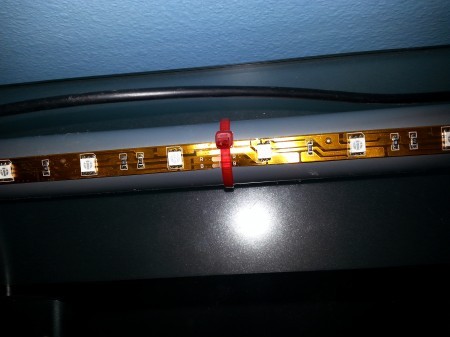 I initially wanted to attach the LED strips directly on the underside of the glass, but the adhesive on the back of the lights wouldn’t adhere to the glass at all. I ended up sticking them on the metal poles that support the glass desktop and using zip ties as extra support. The adhesive was quite powerful, but I used the zip ties just in case the adhesive starts to fail over time.

One thing I noticed when I was installing the LED strips at this stage is how ugly they really are. They truly are just LEDs – there’s no plastic covering or anything to make them look a litter nicer. This doesn’t matter at all for me because they will be on the underside of my desk, completely out of sight. However, if you wanted to do a project where the strips could potentially be out in the open, you’ll want to take into account that they’re literally just brown-gold strips. 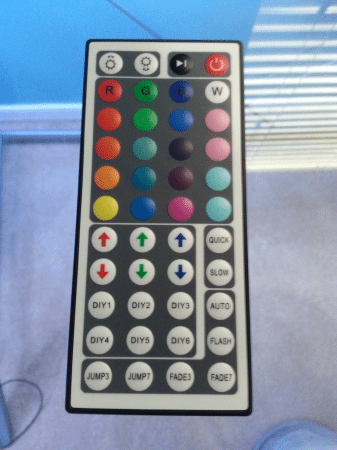 To control the colors of the LED lights, they have included a handy remote. The remote has a ton of buttons, but you simply press a color you would like and the lights change to that color. The buttons at the bottom for “Jump 3”, “Fade 7”, etc are basically light shows that will flash through the different colors the lights can create. 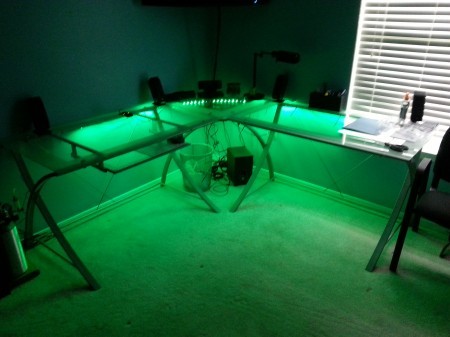 Overall, I think the lights add something special to my otherwise-ordinary glass desk. Using just a $25 LED kit and a couple of zip ties I was easily able to customize my workspace in about 30 minutes. If the directions were written clearer and explained step-by-step how the lights worked, I probably could have gotten this project done in 15 minutes… But for the money you can’t beat this product.

If you are in the U.K. you can also order LED light kits from them directly and they ship fast and in a few days http://www.lightingever.co.uk/ as well.

Disclaimer: LightingEver.com sent us the following products so that we could build a custom LED lighting project and showcase how to use their products and services:

Compensation was received to cover the materials and labor.  The opinions expressed are 100% mine and mine alone.