For those who play space combat simulators or flight simulators, a joystick helps really amplify the experience.  Nothing feels like flying a ship with a stick in your hand instead of sliding your mouse but for those who have done research on flight sticks they can be expensive.  So I had read in the forums some Elite: Dangerous players had decent performance and feature set with the Logitech Extreme 3D Pro Joystick so I decided to try one out for myself.  I will discuss what I found were to be the pros and cons with the Logitech Extreme 3D Pro with Elite: Dangerous and where I think the stick works well and how it works. 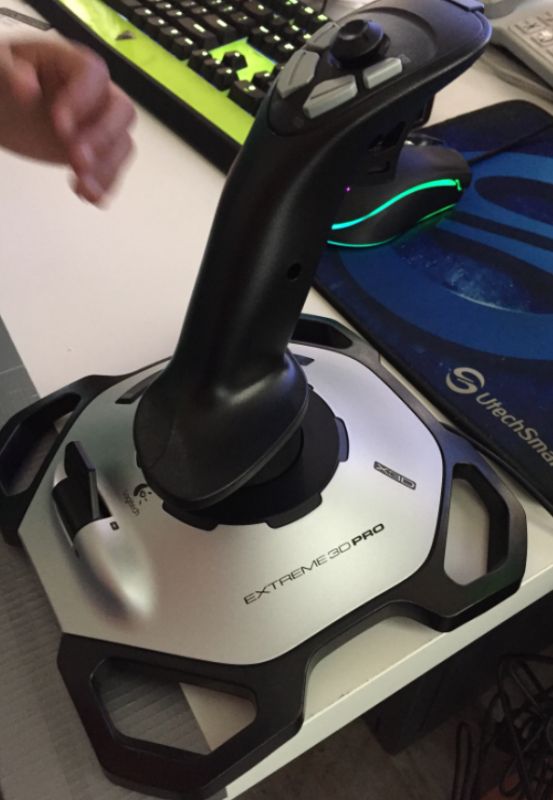 First, I had some desk space issues with the large footprint of the Logitech Extreme 3D Pro as can be seen in the picture above, you need to make sure you plan your stick area properly.  This controller doesn’t come with a 2nd unit for controlling thrust, so it is a single base stick with the thrust control on the stick itself so it takes less room up on a desk than say the Thrustmaster T-Flight Hotas X Flight Stick.  The Thrustmaster USB Joystick however takes up a lot less room but sacrifices on the number of buttons available to you to map to. 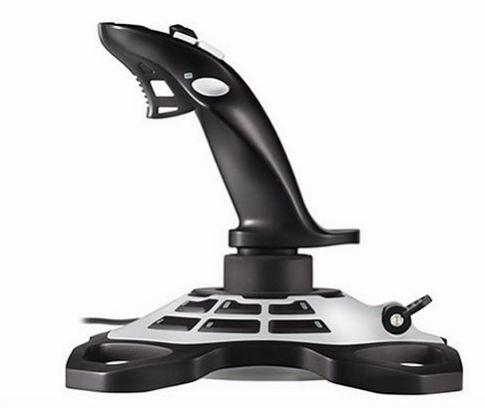 The side of the Logitech Extreme 3D Pro Joystick at the base has 6 buttons, these can be easily programmed to be your cargo drop, landing gear, system map, galaxy map, hyperspace jump…etc.  You set it to the buttons you don’t need to use in combat because they are lower on the stick and require you to use your left hand to press them, or take your hand off the controller stick which is inconvenient and not easy to do in a combat.  The stick doesn’t quite have enough buttons to replace using the keyboard entirely, but with the flight stick properly programmed you shouldn’t have to use the keyboard unless you are needing to use the interfaces to look up missions, chat with wingmates or deploy/order fighter pilots, manage refinery items…etc.

The pull trigger at the top of the stick is very satisfying and I love having multi-guns assigned to it, with a 2nd weapon set defined to the thumb button just off to the right at the top of the stick.  The great thing about this stick is not only can you push forward, backward, left and right on the stick, you can twist the stick left and right, so that if you set your twisting to be the roll, you have your Yaw, Roll and Pitch all covered by stick movements.  This leaves the 4 buttons at the top of the stick to be used for Chaff, Heat Sink and other secondary combat options.  The little tiny thumb stick at the top makes the perfect thrust control, you simply set it to make your forward, back, left and right thrusters fire off so you can slide your ship and have fine control when coming into those landing pads, or when you want to slide your ship to the left or right to dodge a dumb missile that doesn’t track target.  It works, sliding and firing with gimballed weapons is satisfying while they shoot direct shots that miss and whiz right by your ship.

Now the thrust slider at the bottom of the base I found to be the only major problem with the Logitech Extreme 3D Pro Joystick, when configuring this in Elite Dangerous to be your throttle forward and back, it will throttle you up to full speed, and down to reverse speed.  But there is no increment, you can’t simply slide the throttle a little bit and slightly accelerate and level off, it is all or nothing, full throttle to full speed, or cut all speed.  I would have liked to be able to just slide the stick a little and have it give partial throttle, but there isn’t the sensors in this stick to have that sliding level for throttle.  I honestly don’t know if any other sticks do either as this is the only flight stick I use with Elite: Dangerous.  The other thing I wanted to do is somehow have that slide set in the middle to be zero throttle, then take it down to move in reverse or reduce speed and up to throttle forward, but it seems to only recognize when you click it toward the very top or very bottom of the slide, there is no recognition for a “middle” or a between the top and the bottom of the slider.

Finally the only other item with the Flight Stick is it is large and padded on the bottom, but it is too easy to pull too hard on it, or yank to the left and the right when in the thick of battling other ships that you topple or start knocking the Logitech Extreme 3D Pro Joystick over on it’s side yanking it off it’s rest.  You could however jury rig and mount something I would think that would help stabilize it, but would have been nice if they had some other type of way to keep it locked in place on your desk.

Other than though, the Logitech Extreme 3D Pro Joystick is a fantastic low cost flight stick for the Elite: Dangerous or other flight sim games that offers more buttons and features than other sticks around this price range.  It reminds me of the old days when I played Elite on the Commodore 64 with a joystick that only had 2 buttons, except I have a lot more buttons and movement options at my disposal now!