I had a good solid month to use the Logitech G930 as my primary gaming headset and I used it for listening to music, doing some audio recording, talking on Skype, gaming and more.  I could not describe to you enough just how awesome I think this headset is and I loved using it constantly.  It is comfortable to wear for hours at a time after the first one or two days to get used to it and the sound for games are just incredible. 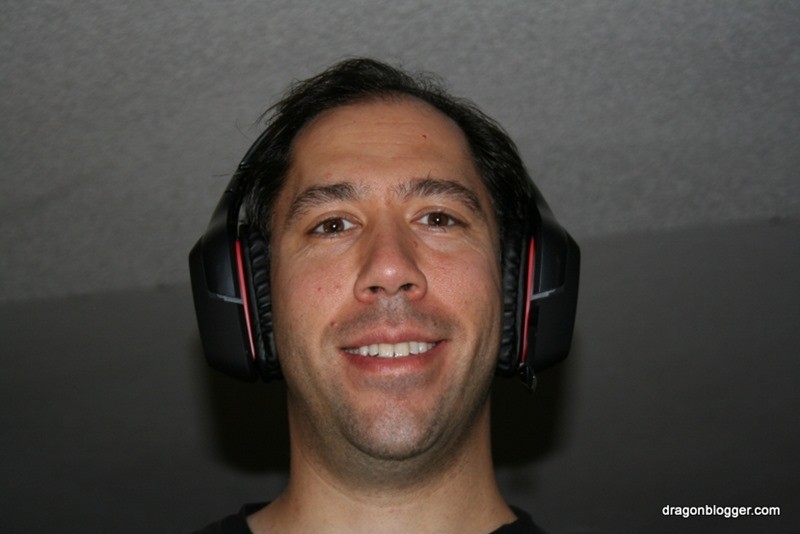 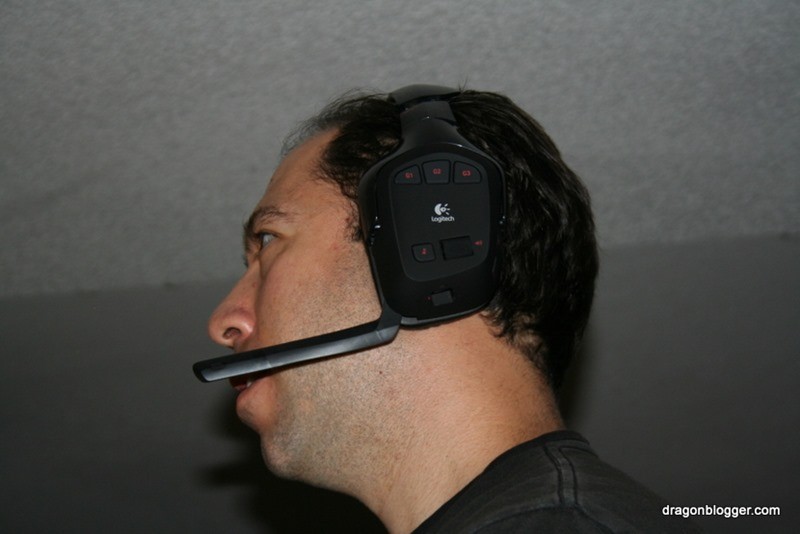 The headset has a slider wheel on the left side where you can quickly and easily adjust the volume, mute the headphone or program anything you want to one of the G1, G2 and G3 buttons and I will talk more about those later.

It also has a button to turn on and off the headset as it is wireless and to turn on or off the Dolby Surround mode.  Now this is a wireless gaming headset, so you get about 5-6 hours of using it without it requiring to be recharged.  It does do a beeping that you and anybody you are on the phone with can hear when it’s battery gets too low.  The G930 comes with a little base station that plugs into your USB port on your computer, and then you plug the wireless USB adapter into the base station. You want to use the basestation because it has another USB cord that plugs in and charges your G930 headset when not in use.  The cable lengths are adequate but you need a desktop or shelf room to support the base station which is about a hockey puck sized accessory.

The surround sound is amazing for gaming, and playing Guild Wars 2 or Starcraft 2 was very enjoyable.  You hear environmental sounds, footsteps, whispers, characters talking from behind, left and right and the sense of environment seems much bigger and immerses you more.  The surround sound mode though doesn’t lend itself well to music so switch to stereo mode and the speakers to me sounded quite good and were far better than my Creative 5.1 piece speaker system which was about 6 years old.

I like that Logitech has 1 application that can manage all of your Logitech devices, Mice and headset alike all get managed from the Logitech Gaming Software.  The software also detects and builds profiles for all Logitech devices that were plugged in at one point. 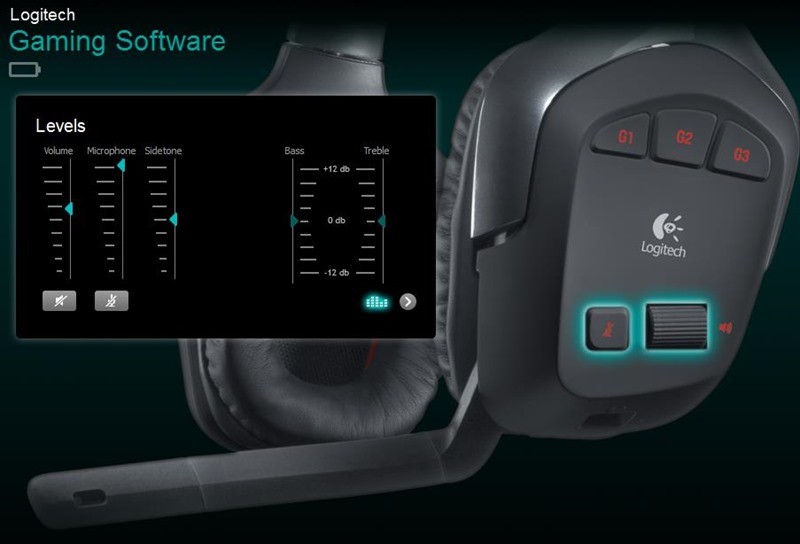 With the Logitech Gaming Software you have a ton of control over your G930 headset including adjusting the levels, setting profiles for various sound settings and customizing each of the G1 – G3 buttons to do anything you want.

You literally can set them to open a browser, or even better there are game specific integration options for your Logitech G930 and I was happy to see some Guild Wars 2 commands that can be quickly and easily configured to the G1, G2 or G3 buttons. 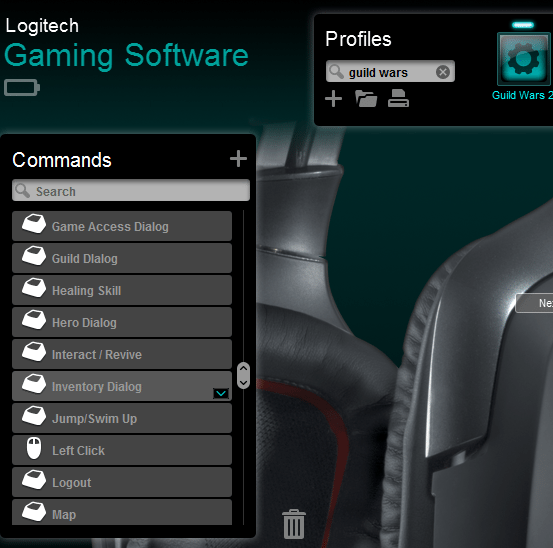 A quick search showed custom hotkeys for Guild Wars 2 and it was cool to be able to tie in some keys to commands in Guild Wars, this was fun but turns out your left hand is needed to much to really make use of the keys above the ear, so using it for a right handed key worked when in non-combat situations like opening the map, but overall for Guild Wars 2 it wasn’t as helpful to remove my hand from the keyboard to press the button on the headset.

By default the Logitech Software is pretty good about detecting games you have installed and building options so you can create custom gaming profiles.  Spotify is always fun because I was able to literally go wear this headset on a treadmill in the other room (not jogging or running as it would fall off, but vigorously walking) and you can manage your Spotify playlist without having to go back to your PC right from your headset. 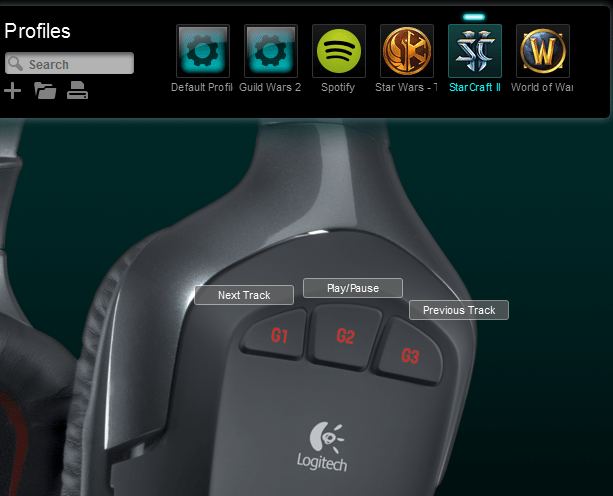 The range is very good, I was able to still get great sound and mic broadcast from over 30′ away from the tower where my USB stick was plugged in.  The microphone has good noise cancellation and was able to remove the background ceiling fan from my recording very well.  It comes with some fun sound effects you can apply to your voice, also called Voice Avatars.  I called a few people testing out these avatars to see how they would sound over Skype on the other end and tested with my kids.  By far the most fun was the Space Squirrel, some of the others merely muffled your voice and didn’t sound too different like the Giant, Troll and Mutant but my kids had fun listening to me being a squirrel while playing with them on Minecraft and we had some fun with it for a while.You can adjust the pitch to make the voices deeper or higher pitched, but overall there wasn’t that much difference and this is simply a gimmicky but sometimes fun feature that is available. 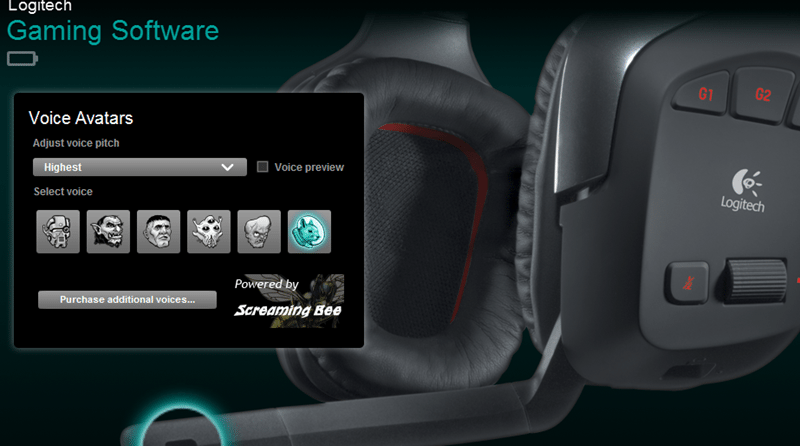 By far though my favorite feature of the headset is the 7.1 surround which just sounds amazing.  You can tune the audio volume for each specific channel though I had no need to, the sounds of the games and environmental effects were just amazing and were the star features of the Logitech G930 gaming headset. 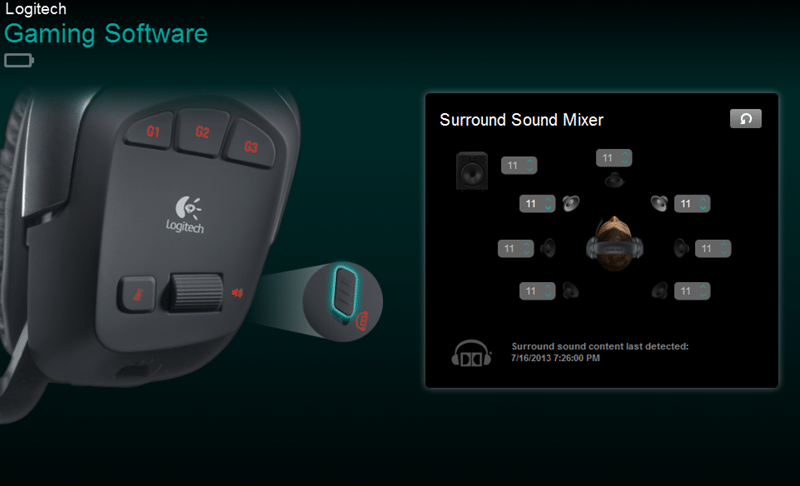 I can honestly say the Logitech G930 gaming headset is stunning, it is comfortable to wear for hours though it isn’t for small heads because even at the smallest setting it feels a tad loose on my big head.  The only thing I would say could be an improvement area with the headset was that the microphone isn’t as clear or crisp for Skype calls or audacity recordings as a high quality USB mic but this is very common for gaming headsets which focus more on the sound than the mic quality.