I had contacted Mocreo on Facebook recently because I saw an ad for their high end MOSOUND BASS Bluetooth speaker and I was curious if they would send us one to review, so we can showcase it to our readers and fans who are in the market. Sure enough, Mocreo delivered and I have to say the MOSOUND BASS Bluetooth speaker was a joy to review.  This premium speaker has a solid metal look, the gold one was sent to me but you can choose the silver if you prefer.  The speaker is fairly heavy and very solid, right from lifting the box I knew this wasn’t going to be like any other Bluetooth speaker I reviewed.

Pairing the speaker is so simple that it wasn’t worth even showing, you simply have any Bluetooth device on and in listening mode, then turn the Mocreo Bluetooth Speaker on, if it doesn’t detect a device it is already paired with right away, it goes into pairing mode and the blue light starts blinking rapidly, within a moment you should see it come up as a Bluetooth device and select it to pair.  Once paired it will always come on and auto pair when another device is detecting, though I noticed if you have 2 Bluetooth devices at the same time paired with it and you turn the speaker on, it can’t tell which one to pair with and will often just pair with the first device to respond.  This is typically true with any Bluetooth device however, there is also no apparent way to force it into pairing mode if it detects it’s paired device, but you want it to search and pair with another device.  I had to turn off my Bluetooth on my AIO PC just so the speaker wouldn’t pair, to get it to go back into pairing mode to pick up the iPhone 5S.

The speaker lower and raise volume buttons don’t work just by tapping them lightly, you have to hold them for a half second or so until they beep and register the volume increase and decrease, this helps prevent you accidentally lowering the volume too slowly or quickly but makes increasing and decreasing volume a little slower than if you can just rapidly tap the volume buttons.  I actually found this to be a negative for me, and I would prefer simple quick taps to raise or lower volume, as a result if I don’t remember which volume level I left my Bluetooth speaker at, and I find my music blasting when it pairs, I have to use the volume buttons on the iPhone or PC, since holding the lower volume button on the Mocreo MOSOUND BASS takes too long to lower the volume when in an urgent situation to reduce volume.

Now I had tested the speaker for hours and I have to say that it is definitely suited toward music and music that tends to be bass heavy like electronica, metal, rock…etc.  The speaker has a tendency to put out bass so even lighter music like classical or audiobooks with a lot of high pitched readers can come out a little bassy, so it is designed for filling a room or a backyard with music.  The volume of the speaker can be so loud that it literally is deafening and in a 10×12 room you can’t hear anything, not even the sound of your own voice over the volume of the Bluetooth speaker as seen in this pairing video with my AIO PC using Spotify.

In the default play mode this is the ideal speaker for listening to loud and deep tracks, but not ideal for high treble and audiobooks if you don’t want that buzzy bass harshness that surrounds a high pitches speakers voices as they finish sentences, it gives the impression of someone whose mouth is too close to the mic when they speak and I noticed this again when listening to stand up comedians on Spotify with the Mocreo MOSOUND BASS speaker.

Later on that evening I used the Mocreo MOSOUND Bass Bluetooth speaker as my primary speaker for watching TV shows in my bedroom, either streamed from iOS applications on iPad or from my Dell XPS AIO PC that I just take into the bedroom at night and watch TNT, USA Network or FX shows the day after they air.  We watched Falling Skies, Perception, The Last Ship, Major Crimes and Suits with the Mocreo MOSOUND BASS as part of this review period and I have to tell you, that I simply put my other Bluetooth speaker away in a bin and have switched to using the Mocreo Bluetooth Speaker as my ONLY Bluetooth speaker now as a result of this review. 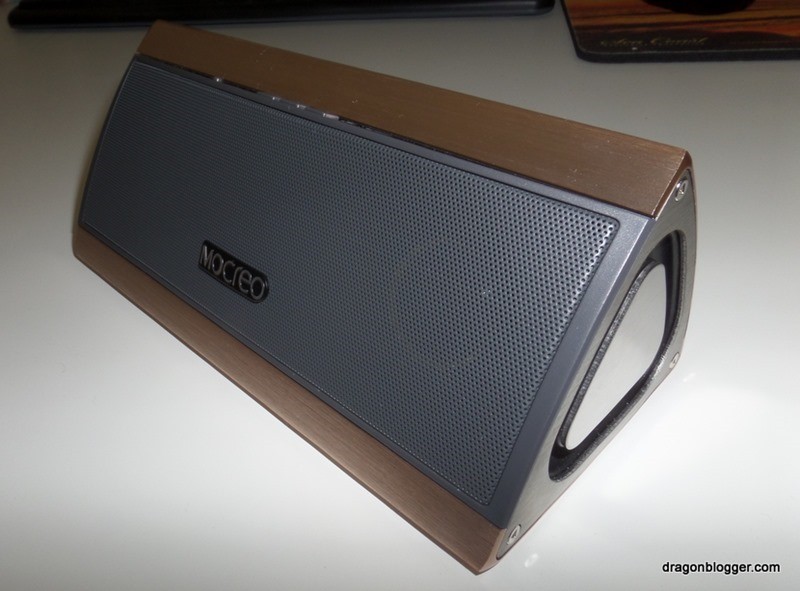 The next day I tested the speaker out as a Speaker phone with my iPhone 5S and it makes for a fantastic speakerphone, I was on a few hour long conference calls and voices were crystal clear and loud.  The microphone picked up my voice fine and it did a pretty good job of cancelling out background noise as well as it’s own speaker volume when using it as a speakerphone.  I had used the speaker for about 6 total hours without having to charge it, but instinctively I put it on the charge via the microUSB cable at the end of the day, so I can’t confirm if it can go the full 8 hours yet, but I can confirm it lasted 6 over 2 days without any indication of having low battery issues.

I found out after the first few days that there was an undocumented feature of the Mocreo MOSOUND BASS Speaker where you can put it in 3D Surround mode, you do this by pressing the volume down and up buttons at the same time for about 1/2 a second, you will see the blinking blue light now shows a solid green light to indicate it is in 3D Surround Mode.  Now you will clearly hear voices and sound seem to emanate from around the speaker on both sides as well as the front, and this gives an aura of depth to whatever you are listening to. 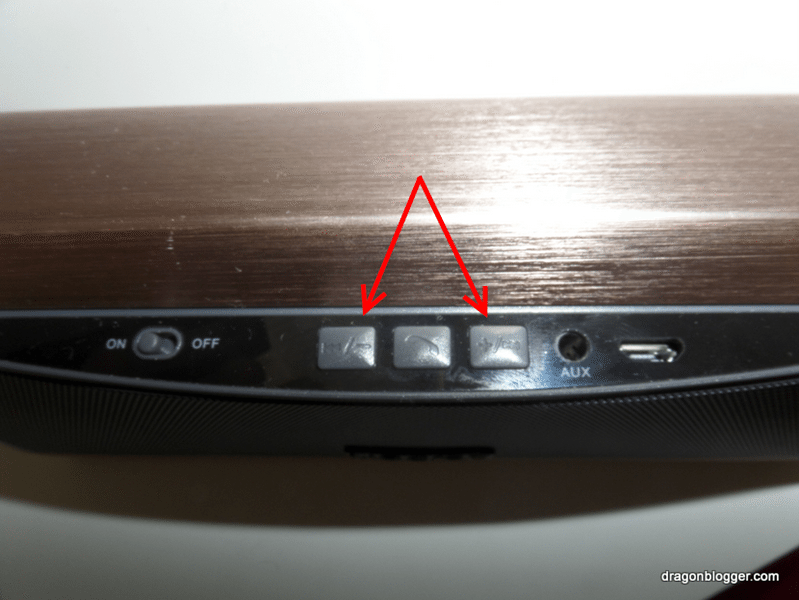 Again, the 3D Surround mode made music more crisp, at the expense of reducing the power of the Bass slightly, it was ideal for watching TV Shows or listening to stand up comedy or music that is instrumental, unplugged or more about the vocals.  In my opinion 3D Surround mode sounded better overall with everything I listened to than without 3D Surround Mode enabled, so leaving 3D Surround on is going to be my default going forward.