I knew that if I wanted the iPad 2 to be even more functional and useful to my blogging tasks I needed a keyboard for it.  I didn’t want one that required being physically connected to the iPad 2 so this ruled out a keyboard/dock combination for me.  I wanted where I can adjust placement of the screen and can use a Bluetooth wireless keyboard from any reasonable distance while I typed. 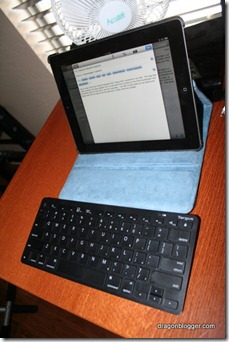 I also needed a wireless Bluetooth keyboard that was small enough and thin enough it could fit in a slender carry case I was lugging my iPad 2 around in.  I found just what I was looking for with the Targus Bluetooth Wireless Keyboard which at less than $50 on Amazon.com was 1/2 the price of some of the $99 -$150 Bluetooth keyboards you can find on the Internet.

I also wanted a Bluetooth keyboard that had dedicated buttons that could be recognized and trigger iPad functions.

As you can see from the picture below, the Targus Bluetooth Wireless Keyboard is extremely thin, actually about as think as a magazine except for the top part which holds the Double A batteries and acts as a little prop to keep the keyboard at a slight angle which is more comfortable for the hands. 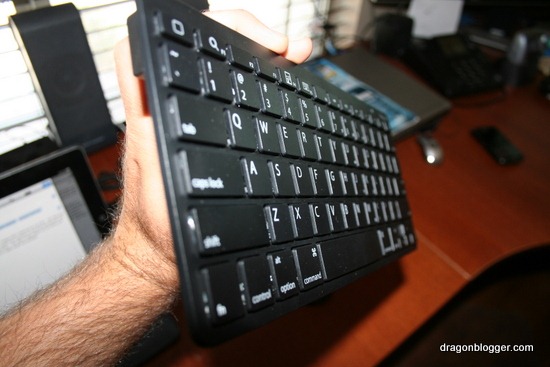 iPad search button, Volume Controls, Rewind, Play, Fast Forward, Lock and even display screen keyboard buttons are all at the top of the keyboard where F1 to F12 keys would be for a normal computer keyboard. 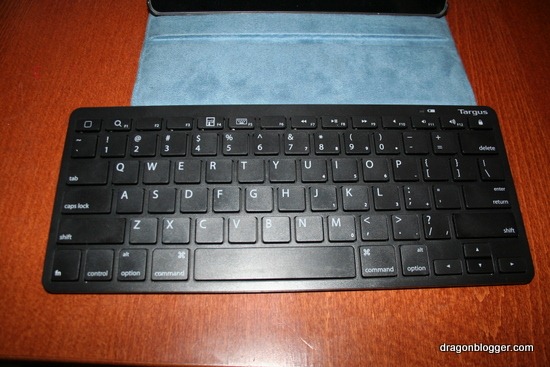 The bluetooth keyboard is so light yet not flimsy, the soft click of each keyboard button press feels comfortable under your fingertips. 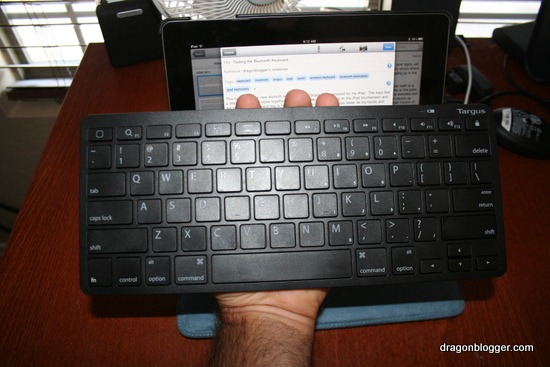 The keyboard connects very easily when you just put batteries in it and turn the device on.  You simply go into your iOS Settings and enable Bluetooth pairing and the device will show up and ask that you enter a 4 digit code to link the device. 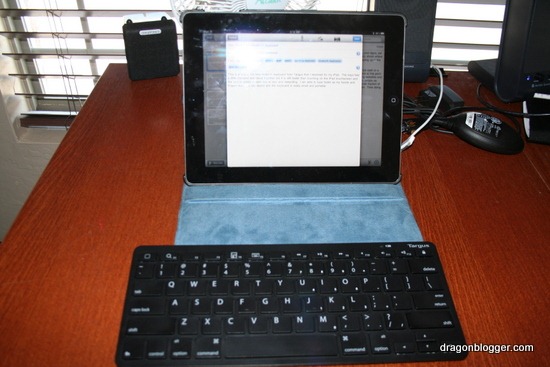 I was able to churn out blog posts and written articles using Evernote, WordPress or even comment on sites with Safari much faster with the keyboard.  You can still use the Tab key to change fields in an online form which prevents you from having to touch the screen to move to the next field.

Some applications don’t allow tab to move between sections, so this became a little annoying in some apps where I had to press the touch screen to get to a part where I can begin typing.  Hootsuite app is one example where there is no way to trigger writing/responding to new tweets without touching the screen.  There are no easy way to use the keyboard with the Hootsuite application easily because if you are writing just a few words and you already have to touch the screen anyway then it’s just easier to type out the words on the touch screen.

[easyazon_image asin=”B004IZN3WU” alt=”Targus Bluetooth Wireless Keyboard for Apple iPad 16GB, 32GB, 64GB WiFi and WiFi + 3G, iPad 2 with Smart Keys AKB32US (Black)” src=”http://ecx.images-amazon.com/images/I/41JyKjbQSVL._SL160_.jpg” align=”right” width=”160″ height=”73″]Also, when using a Bluetooth keyboard I couldn’t find a comfortable way to use it while the iPad 2 was in my lap.  I even tried sitting on the couch and placing it next to me…etc.  Without some flat tray table like surface it is still easier to just hold the touch screen in your lap while facing down and tap on the touch screen.  These limitations however would exist with any Bluetooth keyboard honestly and are not negatives of this particular Targus Bluetooth keyboard.

When I was sitting at a desk, or on a plane with the tray table folded down the Wireless BlueTooth keyboard really showed it’s value.

Now the Targus Bluetooth Keyboard is very small and it took my fingers a while to get used to the compressed locations of all the keys.  My pinky had a hard time intuitively finding the delete key until about 5 minutes of typing on it.  Despite the slight compression of keys I was able to type so much faster than I was on the touch screen and was able to churn out more than 55+ words per minute on online tests.  (about 60% of what I can do on my Logitech DiNovo Keyboard for my PC).

The Targus Bluetooth Wireless Keyboard is a performed well and made it so much easier when drafting long emails or articles on my iPad 2.  If you do a lot of typing and want to write blog posts with your iPad, then a Bluetooth keyboard really makes it so much easier and more efficient.