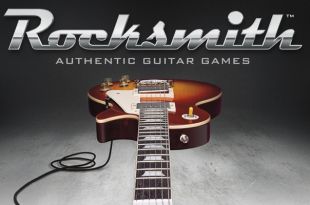 Hey there.  You know, when the whole music game craze started with Guitar Hero many moons ago, I was excited.  A video game that will allow you to rock on a plastic guitar sounded awesome.  And it was!  Rockband soon came along and took it an extra step.  Not only can you now play a plastic guitar, but now you can play plastic drums and sing too!  Oh yes!  Now I can have friends and family come over and we can all sing and play some of our favorite hits while pretending to be in a band.  But I don’t want to pretend anymore, I want to learn!  Rockband 3 addressed that with the addition of “pro mode”.  Gamers who aspired to be guitarists can shell out $200+ on a plastic guitar with strings in an attempt to learn to play songs on a guitar.  A bold move by our friends at Harmonix.  The only problem is that $200+ price tag.  I have a real guitar at home, I have plenty of plastic instruments in my closet, I don’t need another one that is solely for gaming.  What is a gaming, guitarist to do?  Enter Ubisoft’s Rocksmith.

Rocksmith uses a real guitar to play real songs.  As a guitarist, I struggled to get used to the plastic guitars that Guitar Hero and Rock Band utilized.  The weight, the size, the layout, the spacing, and the fret board were all new to me so even though I could play a real guitar, I needed to learn to play THIS plastic one.  I found it somewhat detrimental to my real guitar playing skills.  My spacing was off, my picking was off, and my fingering were off.  All due to being accustomed to playing a plastic guitar.  Rocksmith is here to change all that.

Using your own guitar, Rocksmith allows you to play along to the music.  Showing you chords, notes, and a fretboard.  If you are used to playing Guitar Hero or Rock Band, you won’t take long to get the gist of your screen.  Using the many game modes, you can improve your skills, on YOUR GUITAR, and actually put those skills to the test when you actually play a song.  That’s right, you actually play the song.  It’s not mimicking a song with 5 plastic buttons.  What you learn on Rocksmith is what you can play in front of a crowd. 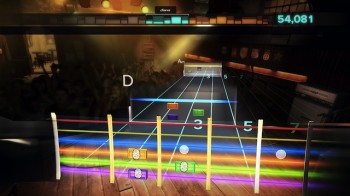 If you are reading this, then you are familiar with the “music game” genre so I won’t bore you notes on the screen and what not.  What I’m telling you is this is the real deal.  Seasoned guitarists like myself or a beginner, like my son, can pick this up and learn to play a guitar.  And the best part about it is the automatic difficulty setting.  When I first picked it up, I didn’t see the challenge.  The game thought of me as a beginner and “taught” me guitar as such.  But after a few short minutes, the game did something I didn’t expect it to do….  It adjusted the difficulty on it’s own.  The game got a little tougher, the notes became more frequent, and I found myself learning a new song.  And I also learned something about my guitar playing.  Even though I can play many a songs, I still find myself looking at my guitar’s fretboard.  I wasn’t confident enough on trusting my hand being where it needed to be.  By using Rocksmith to play a song, your hands WILL learn to be where they need to be.  Learning the position of 5 plastic buttons is easy, but learning the position of a full fretboard is definitely more difficult and as you continue to “play” the memorization starts to kick in and before you know it, you can trust your hands to be in position to rock on!

Rocksmith is not only a game, it’s a learning tool.  It takes the boring out of practicing and with many mini games to teach you many techniques, the game gradually teaches you to become a better guitarist.  Along with the free play mode (along with many customizable “pedals” to change your guitar sound), this game can revolutionize the music genre of gaming.

Guitar Hero had an idea, Rock Band expanded that idea, Rocksmith is revolutionizing it.  Become a real guitar hero with Rocksmith and finally get to learning to play a guitar.  I do not doubt that this game will influence many young ones to get into music.  My son owns a guitar and I’ve tried to teach him how to use it but it’s hard to sit there and teach boring techniques.  With this game, and a little determination, I’ve already seen that spark light up in him.  Get to it, friends.  This is the real deal.  This is not a gimmick.  This is a real guitar instructor disguised as a video game and a new generation of guitarists will have Rocksmith to thank.  Later!

Rocksmith is available for the Xbox 360, Playstation 3 or PC platform too!