Though this hub is marketed as a Mac hub it is compatible with Windows machines as well and functions very well.  What you get with the Sabrent 7 port USB 3 Hub is a way to add a ton of USB ports to your laptop while keeping a small footprint that allows the hub to sit on your desk and give you easy access to the ports.  What I  liked was the rubberized bottom which grips the desk fairly well and minimizes sliding when plugging or unplugging devices.  Though I will say it only works so well, and if you want more permanent a solution you will still need a double sided adhesive or something strong to affix it. 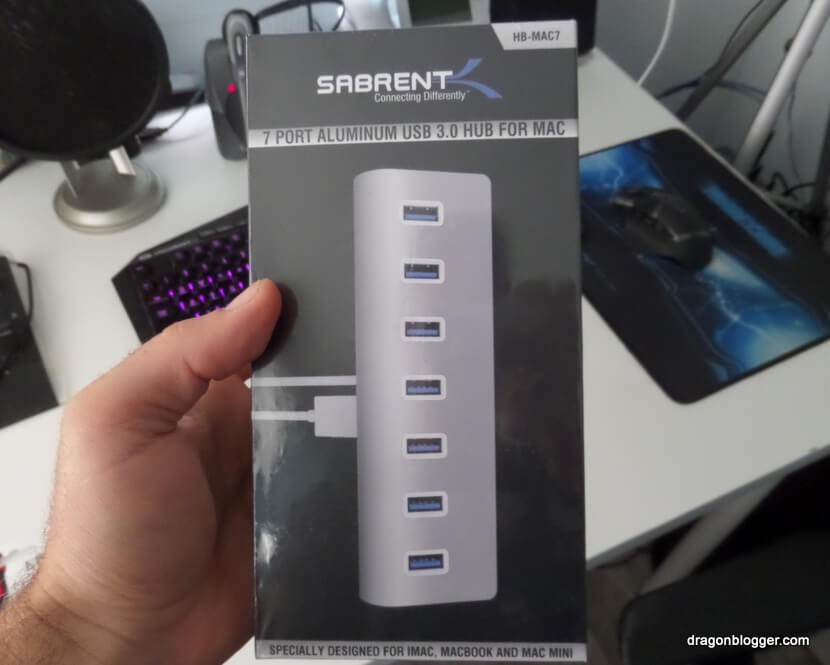 So without further ado, I give you my sloppy cable setup and I plug cables in and out so frequently to test products that I can’t really bother with cable management as no one product stays plugged in long enough to be worth the time it takes to manage the cables. 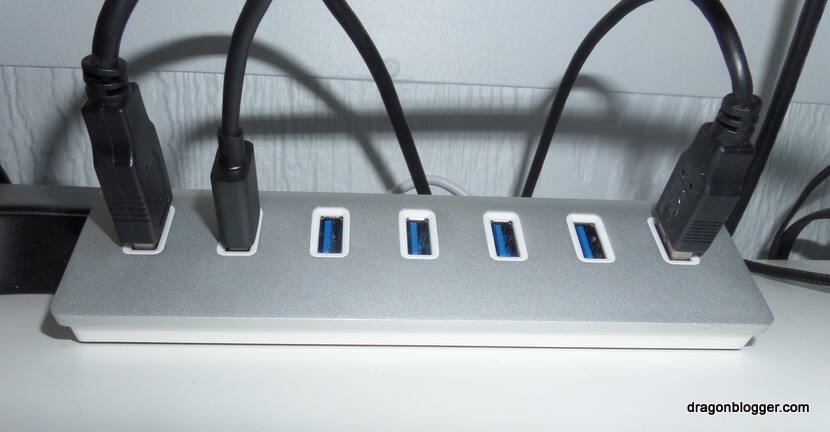 The thing that is really great about the port layout of the Sabrent USB 3 Hub is the fact the ports are all vertical, and while this doesn’t seem like much this helps greatly prevent USB devices from blocking other ports next to them.

When you have a horizontal hub layout like the Amazon Basics hub pictured above, often any USB stick that is thick or fat will block part of the 2nd port and you will have a hard time getting 2 USB devices plugged in side by side without using a USB extender.  But in contrast, the port layout of the Sabrent USB 3 Hub really makes it so you can even fit a Firestick in one port without blocking the other ports which is something I can’t say about the other ports.

The Kingston HyperX Data Traveler is too wide for side by side parallel USB hubs, it blocks a 2nd port easily.  This doesn’t block the other hub ports in the Sabrent USB 3 7 Port Hub which makes it A’OK in my book.  So now that you know I like the port layout, how does it perform you ask?

Well I compared it to my Inatek USB 3 Port Hub and my USB 3 port in the Razer Blade 2014 directly without any Hub at all, and transfer speeds were virtually identical, in fact I achieved better transfer speeds on slower USB Flash drives with the Sabrent than with the Inateck hub for example. 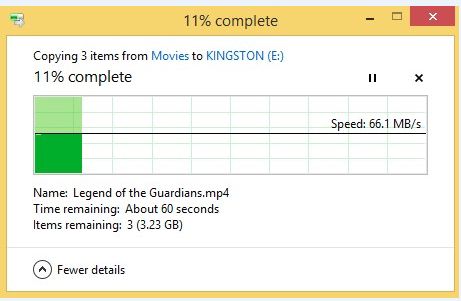 I will tell you that the Kingston DataTraveler 100 G3 does not offer full USB 3 speeds despite being marked as a USB 3 Flash Drive, this first confused my tests as I thought the hub was the problem.  Using the DataTraveler Elite 3.0 I was even able to get higher write speeds 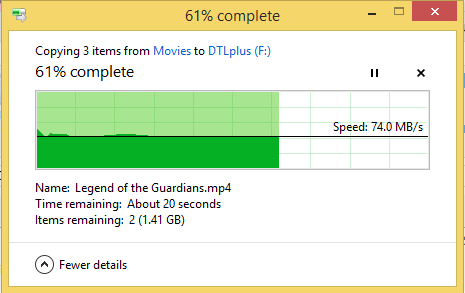 Read speeds were even faster at consistently over 140MB/s 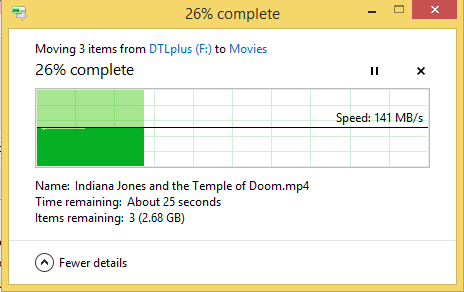 Again, in every test the Sabrent 3 Port USB 3 hub was equal to the built in USB 3 port and slightly faster by 2-3MB/s than the Inateck 4 port USB hub.

Now with the Kingston HyperX and the Sabrent hub it just made everything else look slow by comparison, with between 240 and 247MB/s read speeds 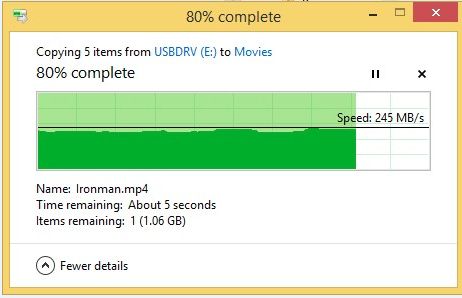 and write speeds above 145MB/s 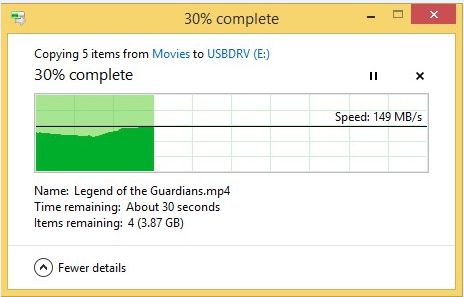 The only thing I wish this hub offered that other hubs sometimes do is a dedicated 2.1A charging port that can be used to charge tablets or phones, one that doesn’t tie up a USB port to your computer for data transfers.  Other than that, this is a fantastic hub that does a great job letting you use 7 USB devices in the single USB port on your laptop or desktop.  The cable is a bit shorter than I would have liked too, at 30″ it is barely able to reach under my desk and fit in the laptop USB port, it should have been 48″ long or 60″ in my opinion.  Lastly the AC charger is a bit fat as you can see in the video, it should have been slimmer to allow the whole setup to be more portable if you need to travel with a 7 port hub (few people should need larger than a 4 port hub to travel anyway one would think).

Content Creator/Owner of https://t.co/kw5uyPjwWQ for Tech, Game, Entertainment and streamer at https://t.co/e072uYSy5Y
The Samsung 32" Q60A 4K UHD Dual LED Quantum HDR Smart TV with Alexa is currently an EPIC deal at 20% off and makes… https://t.co/6nSYG0k28k - 2 hours ago