Not something we usually associate with Tera-tons of 30 km wide celestial rock! Under observation since the Mars Voyager mission four decades ago, Phobos – the larger of two satellites orbiting Mars – has been developing deeper grooves and getting pulled out of its spherical shape.

Back then, it was suggested that the stretch marks across the surface were a result of Mars pulling too hard on its moon, but this hypothesis was negated by asserting that the Phobos was a solid monolithic rock, which would not get this stressed-out by gravity!

Later, Alan Harris from the Space Science Institute in Boulder, Colorado felt vindicated for his stress-fracture theory when in the recent meeting of the American Astronomical Society’s Planetary Sciences Division on 10th November, 2015 some simulations prepared by presenters showed he might have been right.

If the Phobos were made of a core of rubble or debris instead of solid rock, it would get deformed much more easily over millions of years! Plus, the surface could be rocky making it seem as if the entire celestial body was rocky. It could just be like a nut – hard outside, soft inside. The constant pulling by Mars would cause sections of the satellite to get separated or stretched, thus developing these grooves.

In another 50 million years, it is estimated that the stress will cause a disintegration of Phobos, scattering its guts around! 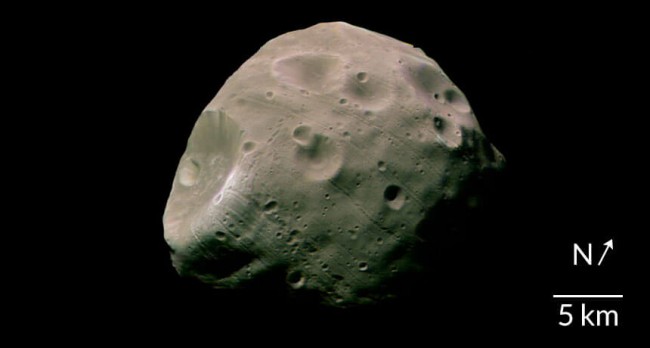 However, some of the striations can’t have been formed under the influence of Mars, as suggested by Michael Nayak of the University of California, Santa Cruz. According to his simulation, some rocks were scattered from the Phobos, and when the fragments or meteorites fell back under gravity they formed these curious trenches.

Alan Harris agrees with him and feels that both these hypotheses would account for most of the grooves on the surface of Mars’ largest Moon.

Similar hypotheses have been proposed for the crater formations on the Earth and the Moon, in a series of rock-pelting fights several million years ago. They supposedly transferred some moon rock onto the Earth and some complex mineral rocks from here onto the Moon.

As Einstein is said to have said, “If you can’t explain it simply enough, you don’t understand it well enough.” However, Harris says, “every now and then, nature doesn’t have a simple cause.” Quite true – Nature works in a series of events, not one-hit-wonders!

It might seem weird that even rubble can be stretched in this way by gravity. But imagine landslides, earthquakes on the surface and the corresponding shifting of tectonic plates (layers of the Earth’s crust), liquefaction of the soil causing building collapses.

Anyway, we might want to be ready and prepared for such disintegration of our own Moon!

Preparing for Asteroid, Meteor or Comet Impact on the Earth