In a heart-rending yet anthropologically exciting discovery, an Aconcaguan Inca boy who had been sacrificed in a seemingly inhuman ritual around 500 years ago has contributed to discovering his maternal ancestry based in Peru.

The mummified remains of this young Incan’s lungs were extracted (shown in the picture below) and analyzed by a group of geneticists led by Antonio Salas of the Universidad de Santiago de Compostela, Galicia, Spain to try and determine his lineage. 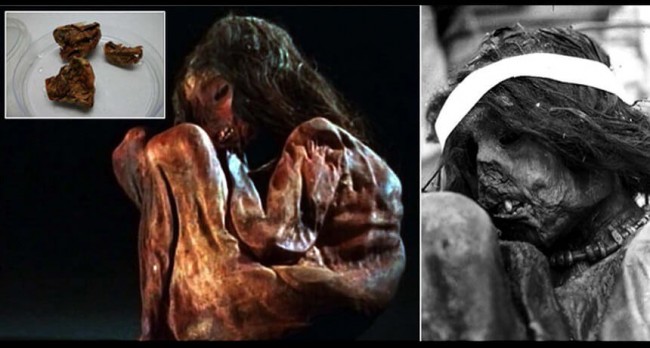 The DNA from the mitochondria present in his lung tissue was used for analysis. Mitochondrial DNA is supposed to be inherited solely from our mothers, so it will show lesser variation over generations since there is no recombination – only sporadic mutation. Mitochondria are like the engines of our cells, consuming fuel oxidized by oxygen and producing energy which is used for running all our life processes and maintaining our core body temperature at 37.2`Celsius or 98.6`Fahrenheit. They are present in the cytoplasm, outside our cell nucleus as opposed to the “regular” DNA which is inside the nucleus.

Apparently, comparing his mitochondrial or maternal genetic material led the team to the discovery of connections between his mother and a 14,300 years old population in Peru, South America. They achieved this by looking for linked genetic variations or alleles in the mitochondrial DNA and ended up tracking the similarities to presently living Peruvians and Bolivians and a Wari Empire member of Peru. The Wari community enjoyed a thriving presence in Peru between 600 CE and 1000 CE.

CE denotes Common Era, which was previously known as Anno Domini or AD.

Antonio Salas and his colleagues have reported all their findings in the November 12, 2015 edition of Scientific Reports.

A tiny 350 mg portion of dissected lung tissue from the Aconcagua mummy was used for DNA extraction. The haplotype of the mummy has 51 variants with respect to the rCRS. The variation observed in the mummy’s mitogenome fits perfectly within the phylogeny of one of the most typical Native American haplogroups, C1b. Moreover, this haplogroup represents one of the most frequent branches within C1 (together with C1c and C1d) and was recently identified as one in more than fifteen mtDNA American founders. 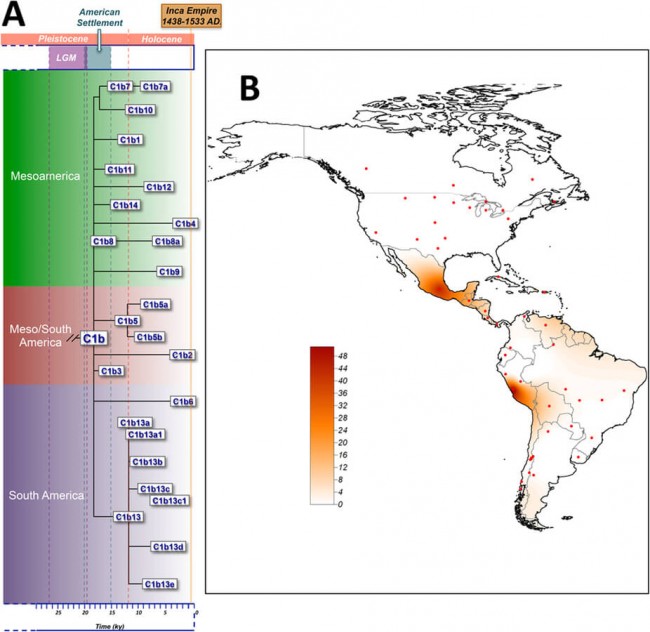 (A) ML phylogeny and TMRCA of the main C1b clades analyzed in the present study and the American chronology (LGM: Last Glacial Maximum). (B) Spatial-frequency distribution of haplogroup C1b. The map was based on control region information. Note there are two main peaks of haplogroup C1b frequencies, one centered in Mexico and another one in Peru. In addition, there is a third peak in Puerto Rico (n = 23); this high frequency on the island projects over the North-East of South America (i.e. Venezuela and North of Brazil) where in reality C1b is virtually absent. The map was built using a blank map based on GPS coordinates and the SAGA v. 2.1.1.