I really wish I could record the variety of songs and content that I played through the Sharkk Boombox and put it on YouTube so readers can hear how clear the vocals are and how strong the instruments sound through the Sharkk Boombox which is a Bluetooth speaker system that comes with 2 impressive 20w speakers.  With these you get room filling sound that blows away any single Bluetooth speaker system that is outside of a Soundbox or Soundbar that costs 2x as much or more.

First lets show the Unboxing of the Sharkk Boombox

So after you have the speakers unboxed it is recommended you charge them for a few hours as you don’t know how much battery they will have by the time they arrive.  The speakers come with 2 flat USB charging cables which you can plug into anything like a multi-port charger so you can charge them both at the same time.  The speakers are absolutely identical in every way except for 1 speaker having a B and the other having an A.  The A speaker is your left channel and your primary speaker, the B speaker is your right channel and secondary speaker. 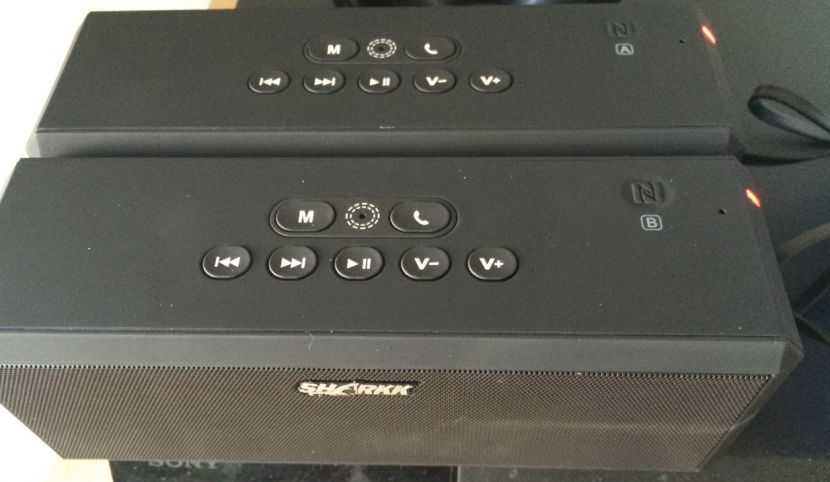 The speakers have a solid feel and you can clearly see the drivers behind the grill of the speakers.  I had them charged and ready to go in about 2 hours.  I tested the speakers as a speakerphone first and the calls were loud and clear, noise cancellation made talking into the speakers natural and they sounded pretty good on the other end from the callers, though still sound like I am “far from the Mic” even when the mic was only about 12″ in front of my face.  Though they are certainly functional as a home office speaker calling system, this is not the main focus of the product, it is in sound and music and this is where they shine.

For the size of the speakers the sound is amazing, and the dynamic ranges from highs and lows are heard very well, though it lacks the depth of “feeling” the deep bass that accompanies a subwoofer and if they were to create a tertiary sub-woofer pairing device that would be an awesome future add-on product.  In the meantime for what they are they should meet the needs of anyone who wants to get room filling sound out of their mobile devices via Bluetooth.  This means if you watch movies on your iPad, Kindle Fire or iPhone you don’t have to listen to the rather pathetic speaker coming from the device itself.  You also can truly fill your room with the music you are listening to, whether dancing at home, working out or anything these speaker systems get loud enough to serve at a small party.  As outdoor speakers they work well for a backyard as well and are far better than any other Bluetooth speakers tested.

The price is a bit on the steep side for Bluetooth speakers but considering the quality and that you are getting a pair of them, the price is justified.  I don’t think the Sharkk Boombox Speaker system is overpriced and performs as well as some full entertainment soundbars which have larger drivers that are in the same price range.

I did an audio test and more video here:

In all honesty you can’t go wrong with the Sharkk Boombox speaker system if you want to have powerful Bluetooth speakers to give you sound that far exceeds what you would expect considering you are probably using a mobile device to transmit it.  It is almost overkill to use these speakers for TV Shows and movies as the sound is so much “bigger” than the screen you are watching them on, I couldn’t help but feel that I should be using them with my 18″ AIO Dell XPS 18 PC instead as the larger screen should match the larger sound.

Disclaimer: Sharkk provided us with the Boombox Buddy System so that we could do a thorough and accurate review. All opinions are 100% mine and mine alone.