One of the definitions of siege is a police operation where the enemy is surrounded in an effort to compel the surrender of an armed person; I have to admit I’m not sure if this week’s The Following episode was named for the FBI or Joe Carroll’s followers.  For the FBI it is a physical attempt, albeit with a small group; and for Carroll’s followers threats and lies.

Emma, Paul, and Jacob awake in the same bed.  Jacob freaks out and heads to the bathroom while Emma and Paul cuddle talking about the night before.  It appears that while Jacob was fine with a relationship with Paul while they were a “couple” he isn’t ok with having one with both Paul and Emma.  While this is going on Joey goes downstairs and gets the phone kept on a high shelf that he saw Emma and Paul hide the week before.  He calls his mother, giving her some vital information about where he is.  Between that and the trace the FBI puts on the phone, they are able to narrow down where Joey and his captors are.  Unfortunately for Joey Paul catches him and takes the phone away.  Emma has a discussion with Joey lying to him about why they are hiding.  She even tells the child that the police are the bad guys.  Joey again questions his father being bad, to which Emma again replies that maybe he isn’t. 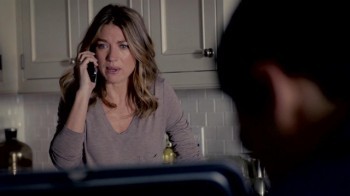 While the three of them are distracted, Joey escapes into the woods and wanders around looking for help.  A male neighbor finds him and takes Joey back to his house so the boy can use the phone.  The man’s wife greets Joey warmly but looks at her husband knowingly.  The couple tell Joey they have seen his face on TV and the police have been looking for him.  Before Joey can get any questions about, Emma finds Joey.  She promises him that he can call his mother as soon as they get back and he willingly goes with her.  In the woods Emma meets Paul and tells him about the couple.  Back at the house, Emma locks Joey in his room after she promises to get the phone for him to call his mother.

In prison, Joe’s attorney, Olivia Warren, shows up at his request.  When she tells him there is nothing she can do for him as all appeals have been tried, he tells her that he needs her to deliver a message to the media.  She reluctantly agrees and when it turns out that Carroll’s message is a quote from Poe’s The Masque of the Red Death, the FBI knows it’s a message to put something new in motion.  A man who sees this on the news calls another and says it’s time.  The man on the phone uncovers a wall of weapons and the chill creeps up your spine.  These two turn out to be Roderick and Hank Flynn; which makes eight total followers we have met at this point (per the handwriting in Emma’s house we are still missing one).  Olivia also delivers a message, in person, to Claire that she must go to a specific location at a specific time if she ever wants to see Joey again; and she must do it without the FBI’s knowledge.

Despite Claire finding out Joey is fine, even if he’s still a captive, she freaks out when the call is terminated.  Ryan has to calm her down telling her that now they have a way to retrieve the boy and it’s the break they need.  She listens to him and before he leaves, he tells her that they need to talk about what happened with them in the past when he comes back.  Debra deputizes Hardy before him and Mike head out to the area where Joey is being held and he is finally able to carry a gun.  The police are extremely cooperative and help Ryan search for Joey at the farmhouses around.  Ryan is with an officer and they are the closest to the couple’s house when they call about seeing Joey.  The officer knows the couple but unfortunately they arrive too late to save them, although Ryan discovers the blood is fairly fresh which means they are close to the place Joey is being held. 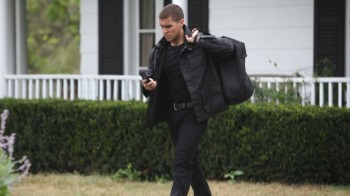 Not long before Ryan and the officer arrive, Hank turns up and tells the trio Roderick sent him to move them out.  They are all packing when Ryan and the officer find the farmhouse.  The two go in at different angles but Hank catches the police officer and fatally shoots him.  Ryan calls in the shooting and attempts to save him but to no avail.  However, Ryan is able to kill Hank before he can get hurt himself (so at this point, we’ve met eight followers and only four are alive still.  Don’t think Joe’s plan is going the way he wants).  Ryan slips into the farmhouse through the basement and finds Meghan.  He promises to get her out alive but she has a fit that he won’t take her right away.  Leaving her in the basement, he heads upstairs and finds Joey just as the child breaks out of this room.  Ryan promises Joey that he is there to help and take him home when Paul puts a gun to Ryan’s head and cocks it.

Claire, desperate to see her son alive again, makes plans with a friend to meet for lunch.  One of the FBI agents, Marshall Turner, accompanies her but lets Claire and her friend eat at a table by themselves.  As the two finish up, Claire asks her friend to order her a coffee while she heads to the ladies room.  Passing Marshall, she informs him of her destination but actually leaves by a back door and manages to shake off the agent.  She gets to the location Olivia told her about and Charlie is there.

This is where we are left for the week; not knowing what exactly plans Joe has for his ex-wife and what will Jacob, Paul, and Emma do to Ryan.  These things leave the viewer more anxious than we have been for a few weeks at the end.  Regardless the biggest shocker of the night isn’t the introduction of two new followers (even if one doesn’t survive) but that Hank cut off two of Olivia’s fingers at some point in the past.  The only explanation why is that she tried to stop representing Joe and he wasn’t going to let that happen.