The Walking Dead is really good at making you realize no one is safe in this show and Home was no different.  A few truths came out, one we knew about but didn’t realize anyone else did, and one that wasn’t exactly a shocker but at the same time made you realize just how far some characters have gone.  I also think a serious show down is coming soon between the two groups. 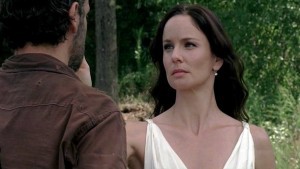 Rick’s delusions of Lori are getting worse and people are starting to worry about his ability to run the group.  Michonne watches him walk to the graves and then out the gate.  Her face says it all, what the hell is he doing.  I have to admit my thought was that anyhow.  He’s heading out into Walker territory alone following his dead wife.  I’m not sure how he didn’t attract the attention of the walkers for so long, especially with him going into the woods at one point. 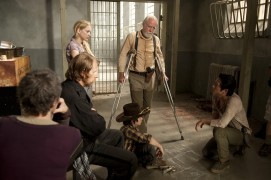 Glenn and Maggie are certainly on the fritz with their relationship.  I’m not sure why Maggie is pushing Glenn away from their ordeal; she explained why she did what she did and what actually happened so what’s the problem?  I’m hoping it gets resolved before the end of the season though.  Glenn is also unhinged himself but in a different way than Rick; he wants to make sure that The Governor can’t take over the prison.  He also wants to make it as safe as it was before Tyreese and his group showed up (I don’t think we’ve seen the last of them either), but with so few of them remaining, they can’t clean out the Walkers like they did before.  At least he listened to reason about not returning to Woodbury and just went to check the perimeter with a car. 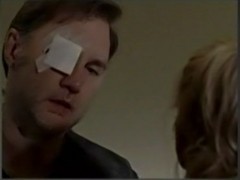 Andrea is finally realizing just how bad The Governor is, I think.  While he compliments her on the speech she gave in The Suicide King and asks her to take over command of the group for the time being, when she goes in search of him later and is told he is just gone (to get supplies), she suspects he’s actually gone to do something to her friends.  It probably helped that he was against her going to see them even if she wanted to return to Woodbury.  Of course, The Governor doesn’t trust her anymore (did he ever actually?) but like with everyone else, he’s not going to show his whole hand so that people keep on believing he’s this great guy.

Then we have Daryl and Merle.  Let’s just say that while Merle tried to shock Daryl with the admission of their past intent (to rob the original camp blind) it didn’t work.  Daryl actually looked disgusted that his brother brought that up after everything that has happened.  It shows how much Daryl has grown as a person when he gets angry over this and helps to save a family caught on a bridge with Walkers attacking and a baby in the car.  I won’t say that Lori’s baby necessarily spurred his attacking the Walkers but I have a feeling that is part of it.  Merle still shows us he’s a complete ass when he yells at Daryl for running off to save some people who haven’t even shared their food with them.  Shows just how much Merle is about “what’s in it for me” and Daryl is about saving humanity where he can. 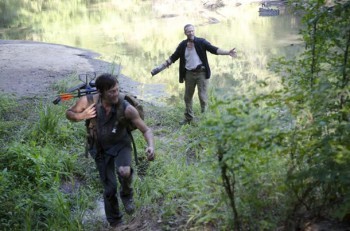 Merle doesn’t make things any better when he tries to take provisions from these people him and Daryl just saved (Merle grudgingly and only where he had to) but Daryl isn’t having it from his brother and uses his bow to make his brother get out of their car and then let’s them go.  When Merle gives him grief over taking sides with someone he doesn’t over his brother Daryl let’s Merle have it.  I actually cheered and clapped that Daryl finally realized his brother is a complete jerk and he is better off at the prison than stay with his brother. 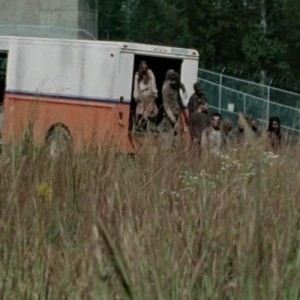 At the prison, Hershel hobbles down to where Rick is and begs him to come back inside.  Hershel asks about what Rick’s doing and when he tells him that he’s seen Lori, Hershel asks if he heard her on the phone too (at least someone figured it out).  Of course, Rick can’t tell him exactly what he’s looking for outside the gate but before Hershel can convince Rick to come back in The Governor and some of his cronies attack.  Poor Axel dies and Carol has to use him as cover while the shots rain down from several locations; including one of the guard towers.  I never did figure out how anyone got up there.  As if that’s weren’t bad enough a box truck rams through the main gate and unloads a Walker Bomb on the group.  Hershel is in the most danger since he can’t crawl well nor defend himself.  At least, Michonne can but even she has to be careful of the gunfire.  Rick can’t get a good shot at the guy hiding in the woods.  On one hand, I understood since trying to shoot from a laying down position is not easy but at the same time how do you miss someone shooting that much at them?  Maggie, Beth, and Carol finally take out the guy in the tower and Glenn returns with a truck.  He and Michonne manage to save Hershel before any Walkers can bite him but at that point, those outside the gate attracted to the gunfire overwhelm Rick.  It looks like the end of their fearful leader when Daryl shows up, along with Merle.  Despite the group not wanting Merle to know where the prison is, his help was probably a good way to get them to let him stay; maybe.

If Home showed us anything, it’s that no one seems capable of leading the group anymore.  That and the Governor really is capable of anything.  Seems as if he no longer cares to take over the prison; instead its revenge is a dish best served before it gets cold.  What is Rick’s group going to do now?  Their numbers are so low they really can’t defend themselves and just might have to figure out a way too.  Will Andrea find a way to keep the Governor from gaining entrance back into Woodbury when he returns?  We will have to wait until next week to find out but until then, what do you think?