Have you ever felt, how awesome it would be to have the PC turned on and off wirelessly? So, you won’t have to go through the trouble of reaching all the way out to the power button of the chassis which might be in places that are hard to reach. At least I do since I’m using the Core P3 chassis by Thermaltake and it’s on the left side of the monitor. Which means the power button is on the back side of the whole setup, so I have to stand up and reach for it to power the system on. Or maybe, you’re just too lazy to power on the system by pressing the power button on Chassis?

Well, Silverstone seems to be marketing just the right product for my and many PC user’s need. A wireless remote to turn on/off your PC! Today, we’re talking about the Silverstone ES02 USB. This is a combination of a wireless receiver that attaches to your motherboard and a wireless remote. So, let’s go ahead and check this out. 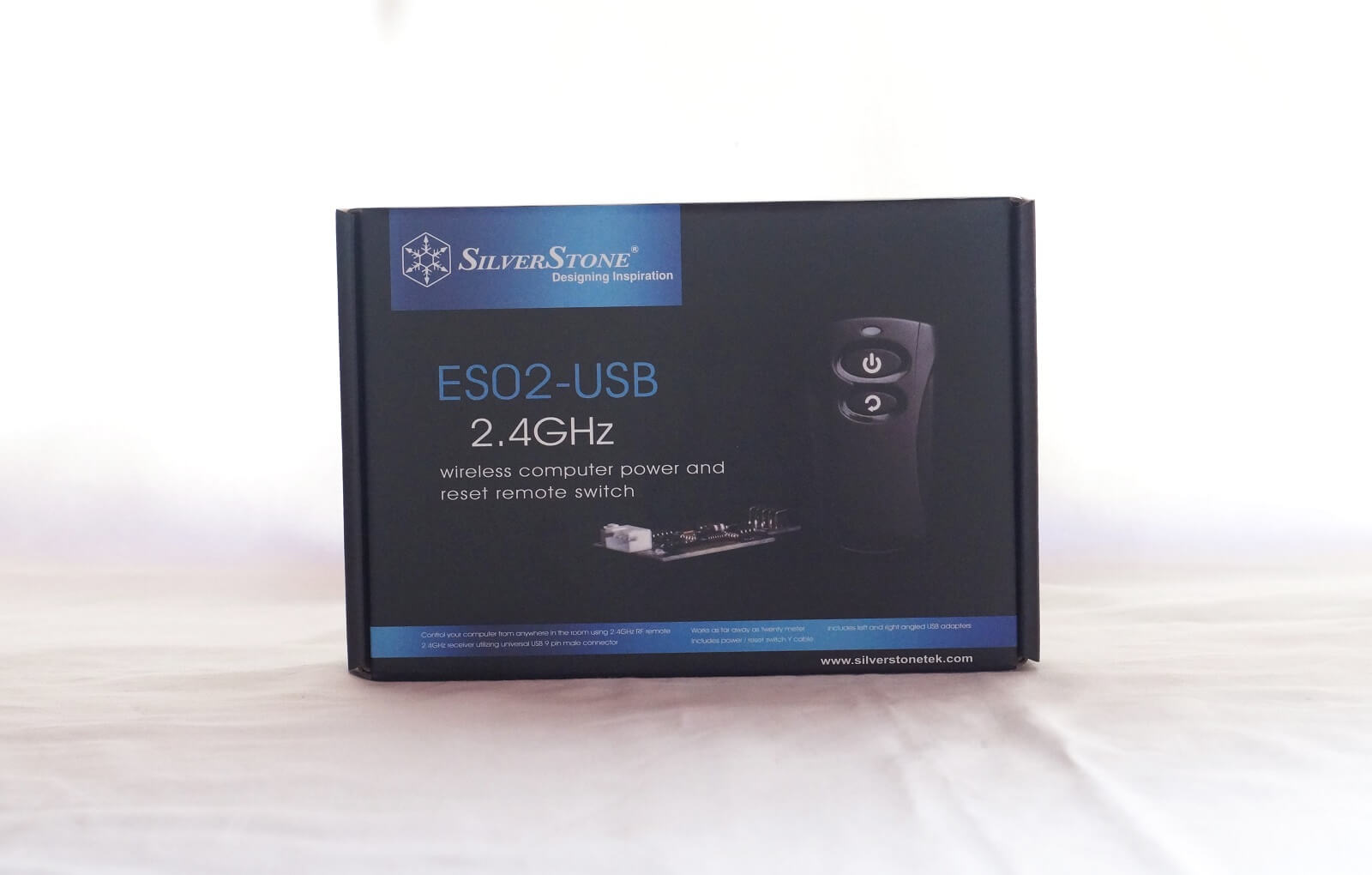 So, we get the Silverstone ES02 USB in black/blue themed cardboard box. 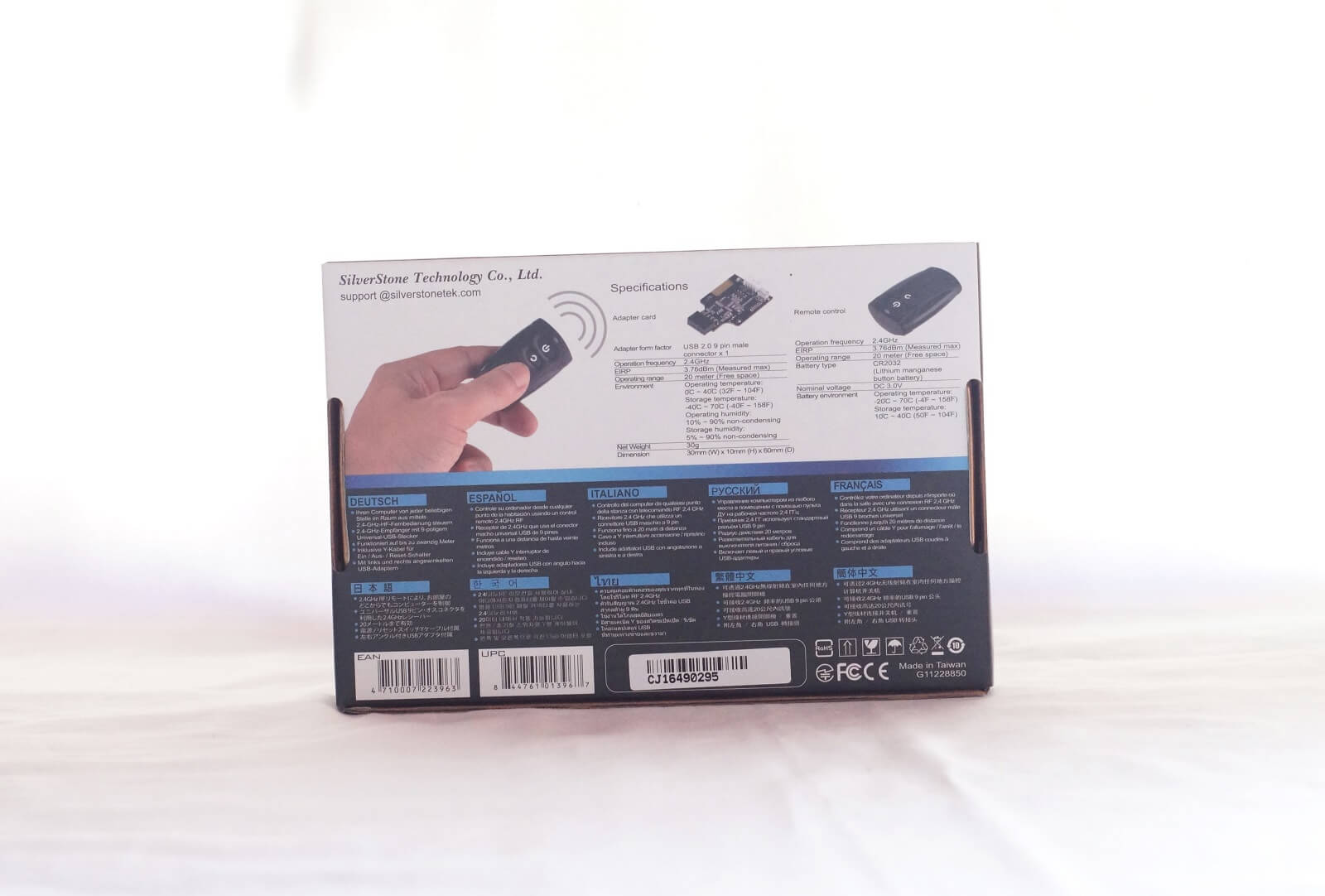 On the back we have the specifications listed of the ES02 kit like the range, temperature etc. 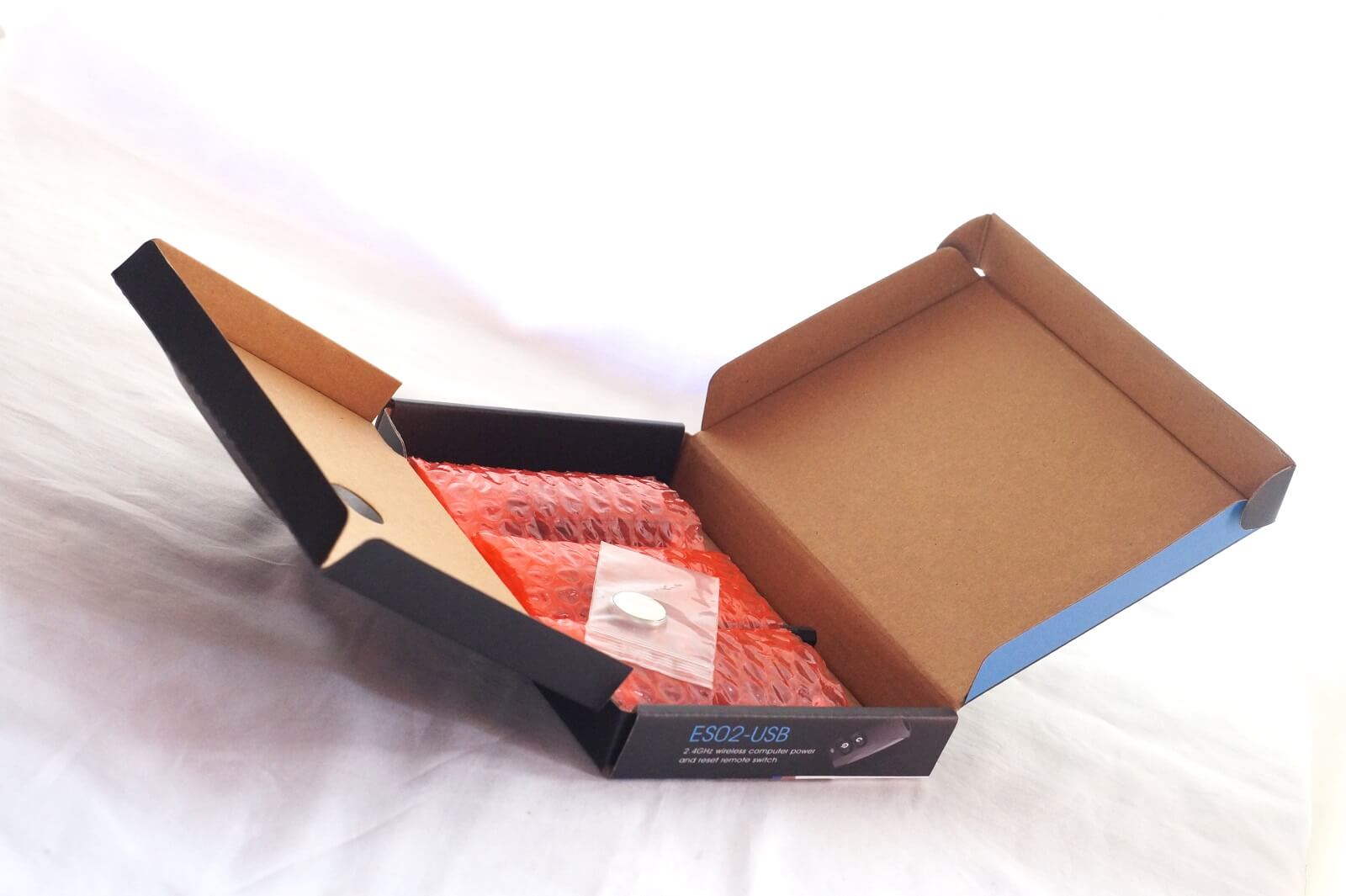 Everything is in bubble wrap! 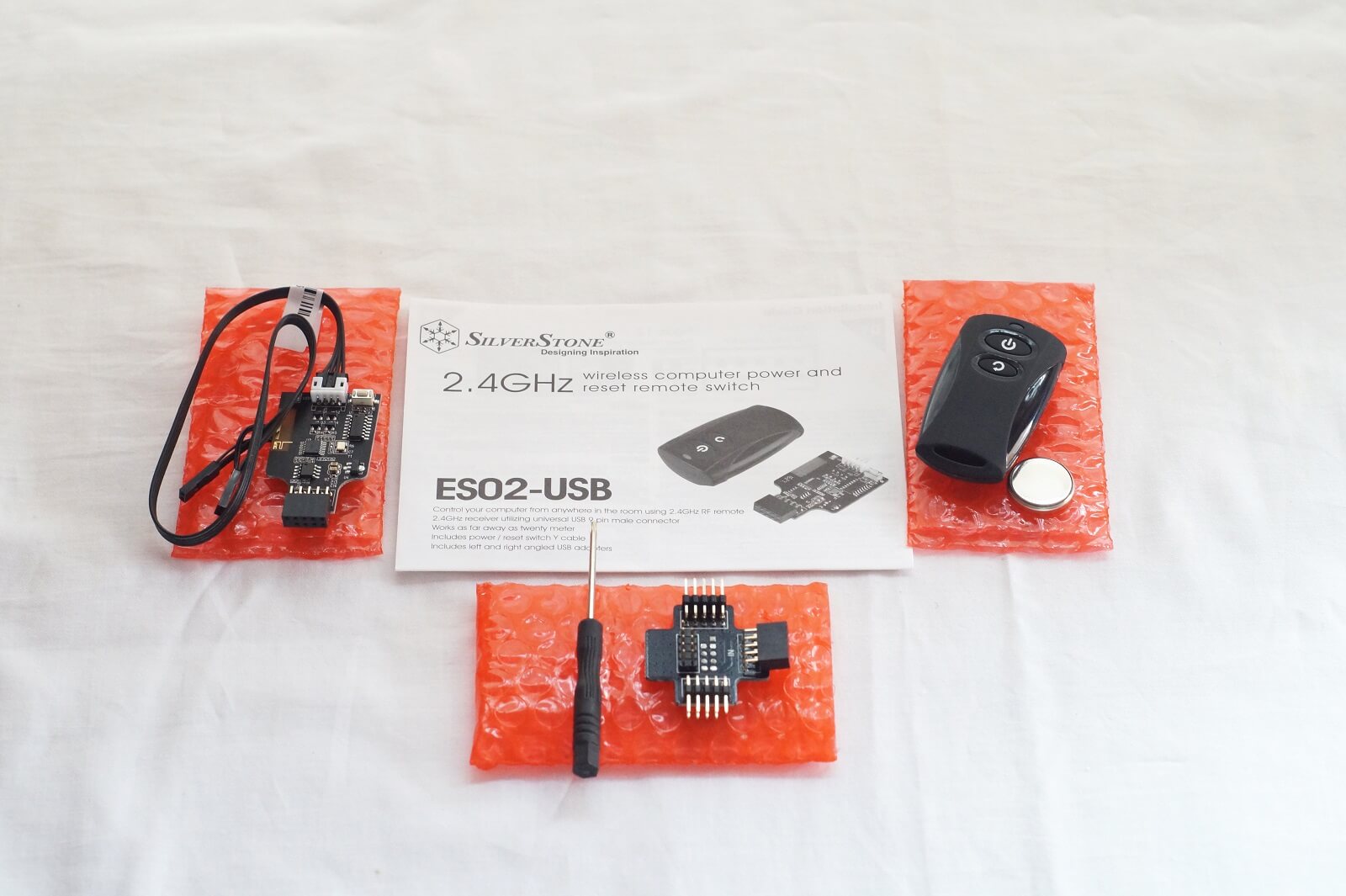 And this is what was in all those bubble wraps. On the left side is the wireless receiver that installs into the motherboard. Then at the bottom, we have the instruction manual. Below that is a 3-way angled USB 2.0 adapter for small spaces. And a screwdriver for the remote. And to the right we have the thing that makes the most sense right now in the whole picture other than the manual; the Remote controller and its battery. 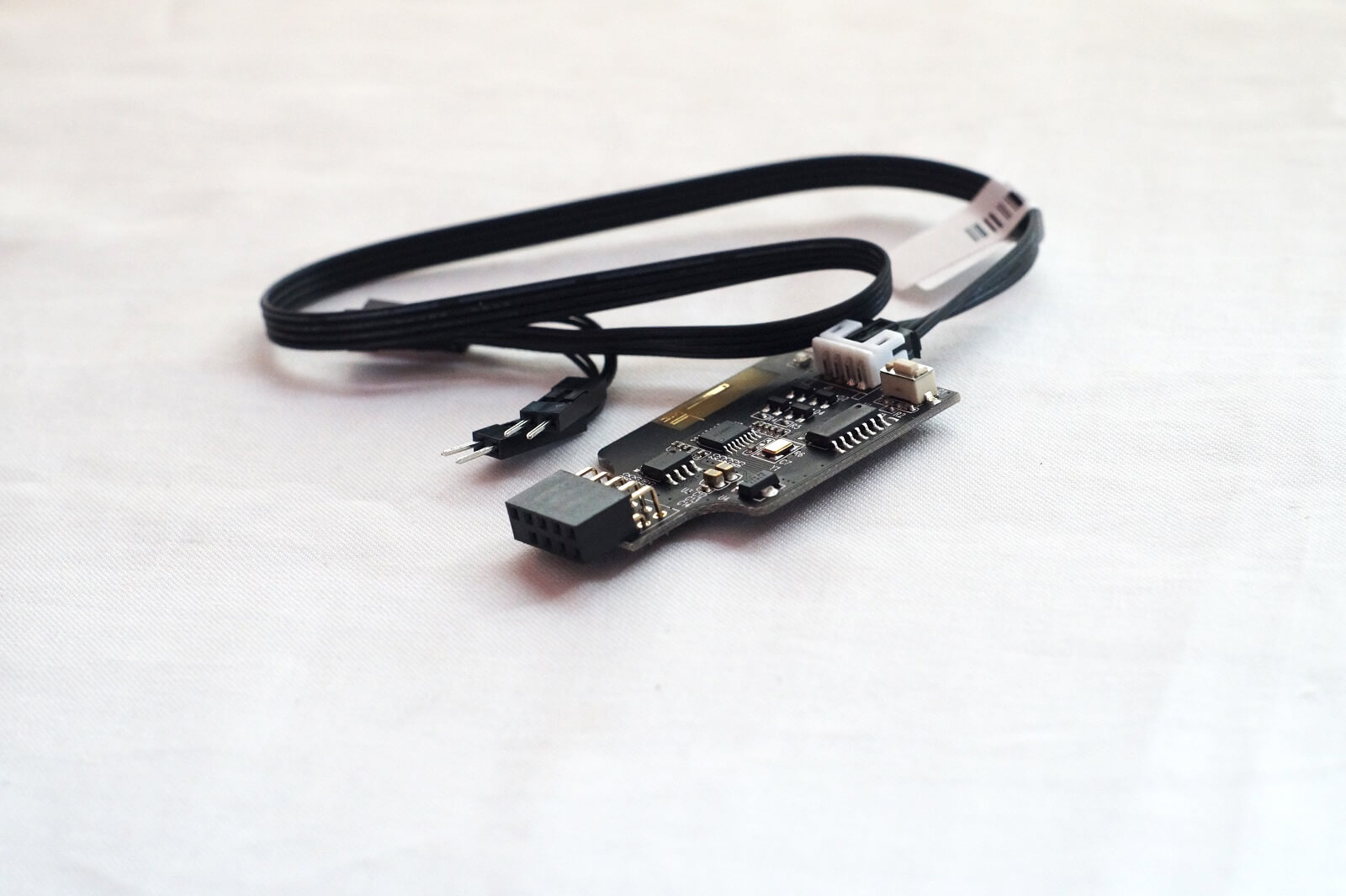 Right here we have the Silverstone ES02-USB receiver. On the PCB, there’s various stuff present that I’m not going to get into, but what’s important is the part on either end of it. On one end, we have the USB 2.0 female port that attaches to the male USB 2.0 header on your motherboard. And on the other end, we have the reset and power switch cables. Also, not clear in this picture, but both the reset and power cables have a splitter which means there are two ends for each. To see the installation, keep on reading. 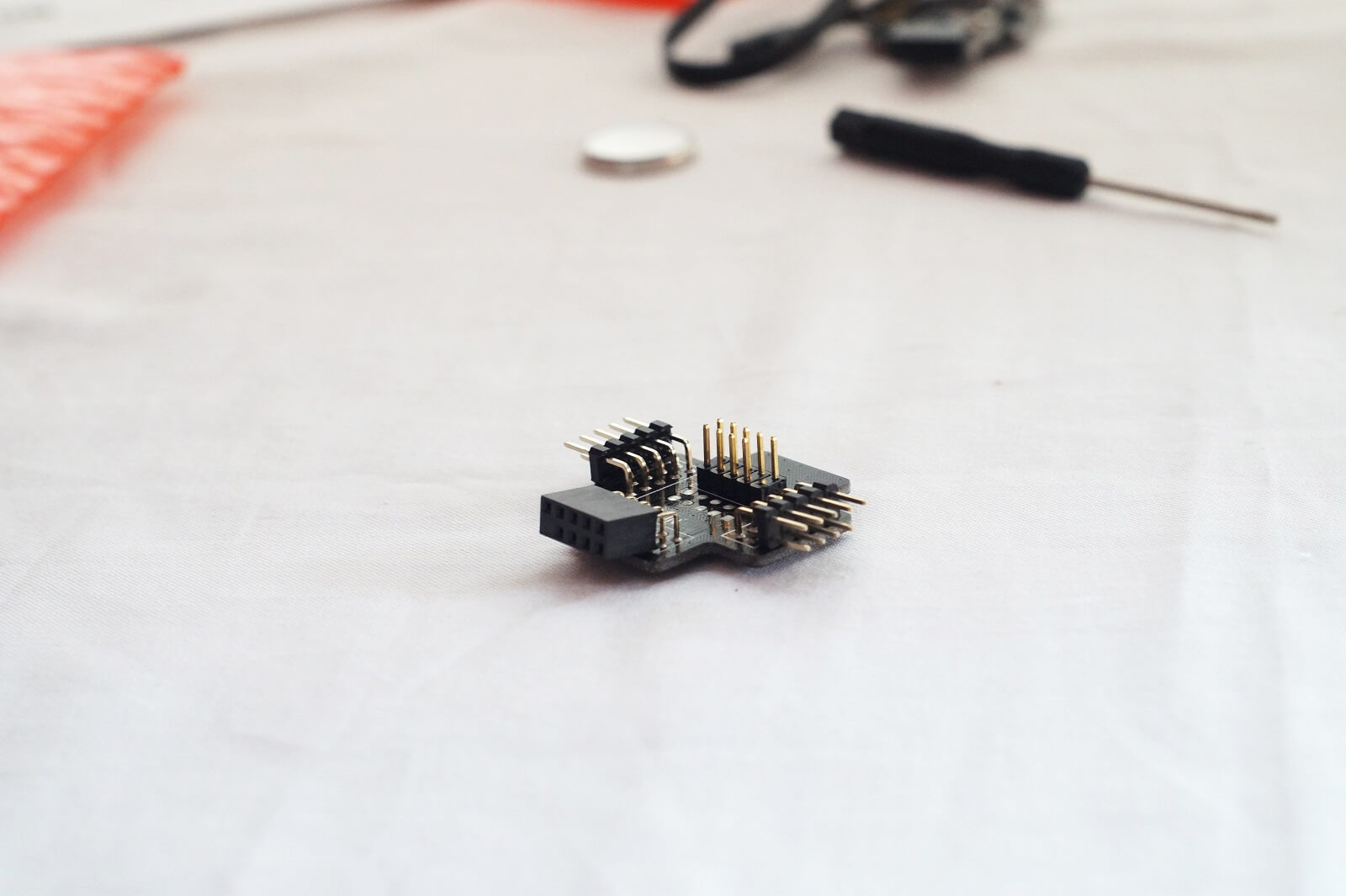 This is the 3-way angled USB adapter we were talking about. You just insert the female end of the USB 2.0 header on your motherboard, and now you can attach the receiver in any direction you’d like. Be that left, right or on top. This small piece of hardware is there just to give you better space management in your Chassis. For some reason, if you can’t attach the receiver directly onto the motherboard, this thing can help you out by giving you more installation options. Also, keep in mind that this piece of hardware right there is optional. It is not required to make the Silverstone ES02-USB work. 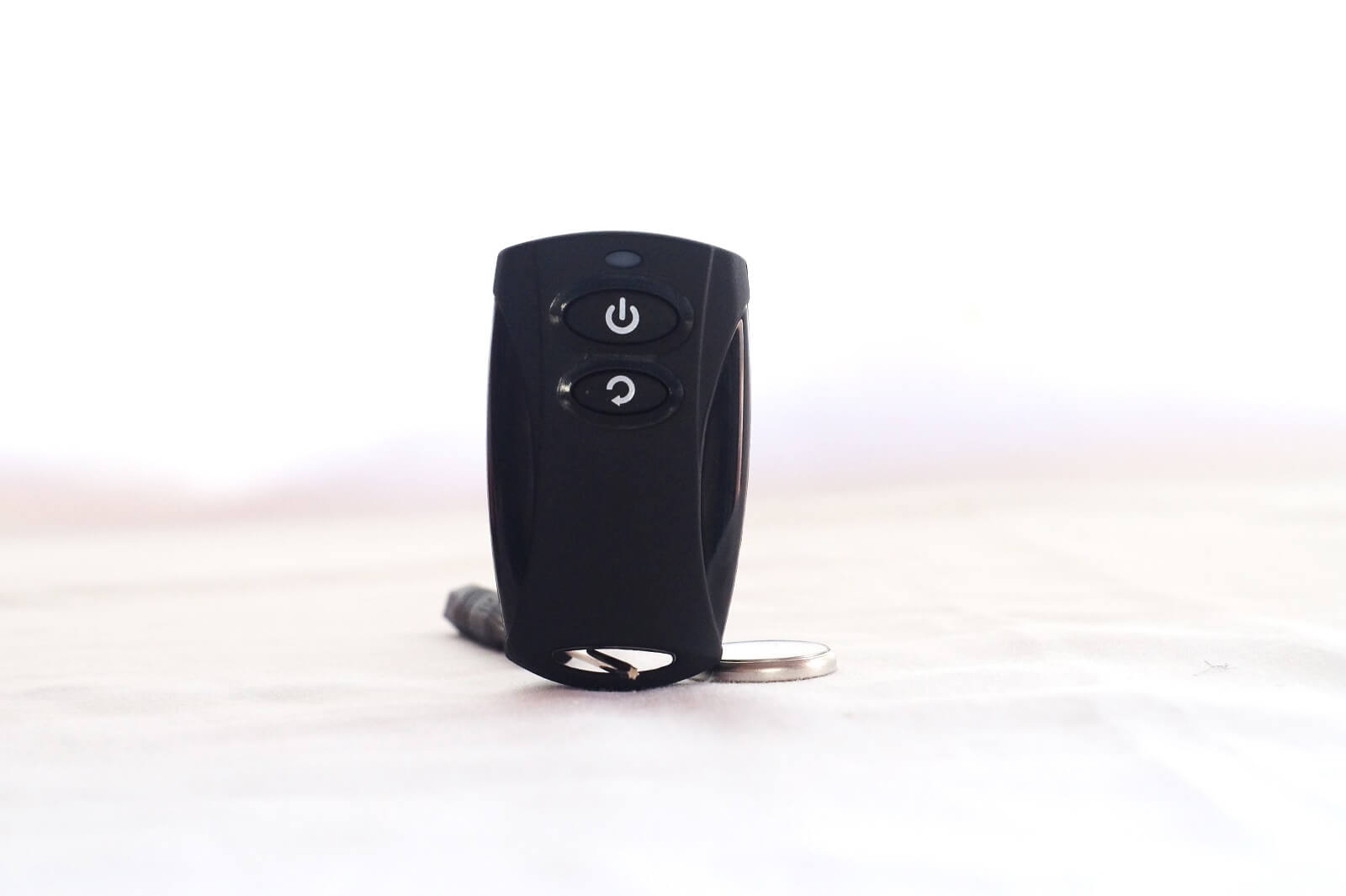 And here we have the wireless remote of the Silverstone ES02-USB package. We only have two buttons on the remote, and both have respective reset and power symbol, so you don’t forget which button perform which function. Also, there’s a LED indicator on the top to notify you that the signal is being sent. 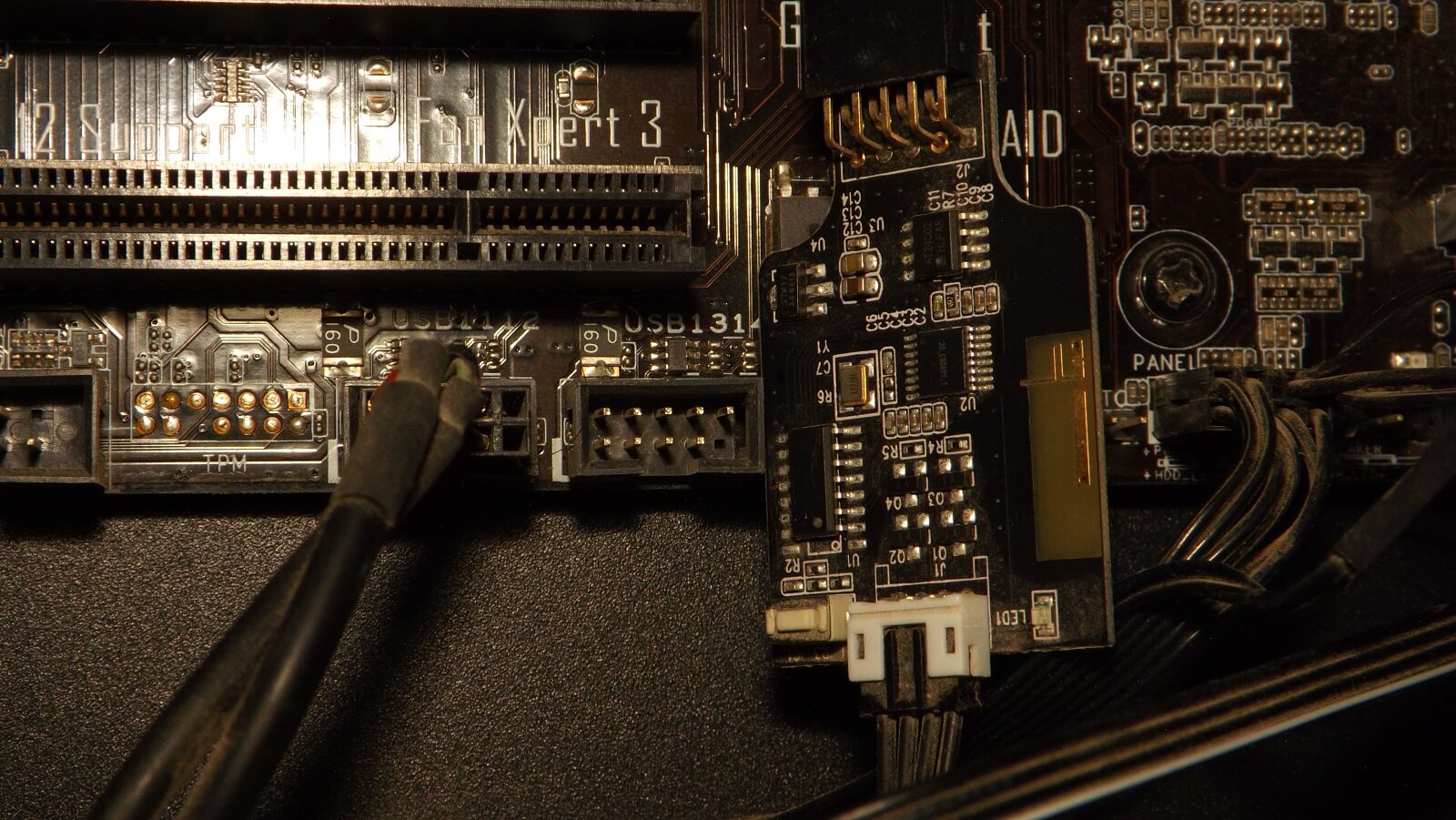 The installation of Silverstone ES02 is really easy. All you’re going to do is, install this piece of the puzzle onto your motherboard. Though make sure the USB 2.0 header you’re installing the receiver onto is either powered or your motherboard supports wake-up via USB in c5 states.

You will find the wake-up option in your bios’ Advanced Power Management (APM) or something similar. If your motherboard does not support wake-up by USB in c5 state, you can still use the ES02-USB as most motherboard supports wake up via USB in c3/c4 states. But now you’ll need to boot the system at least once so that when you turn off the system, it goes into C3/C4 state.

More information on C states can be found here: Click me!

(Optional) If you need to, then you can install the 3-directional angled USB adapter right now for better installation angles. 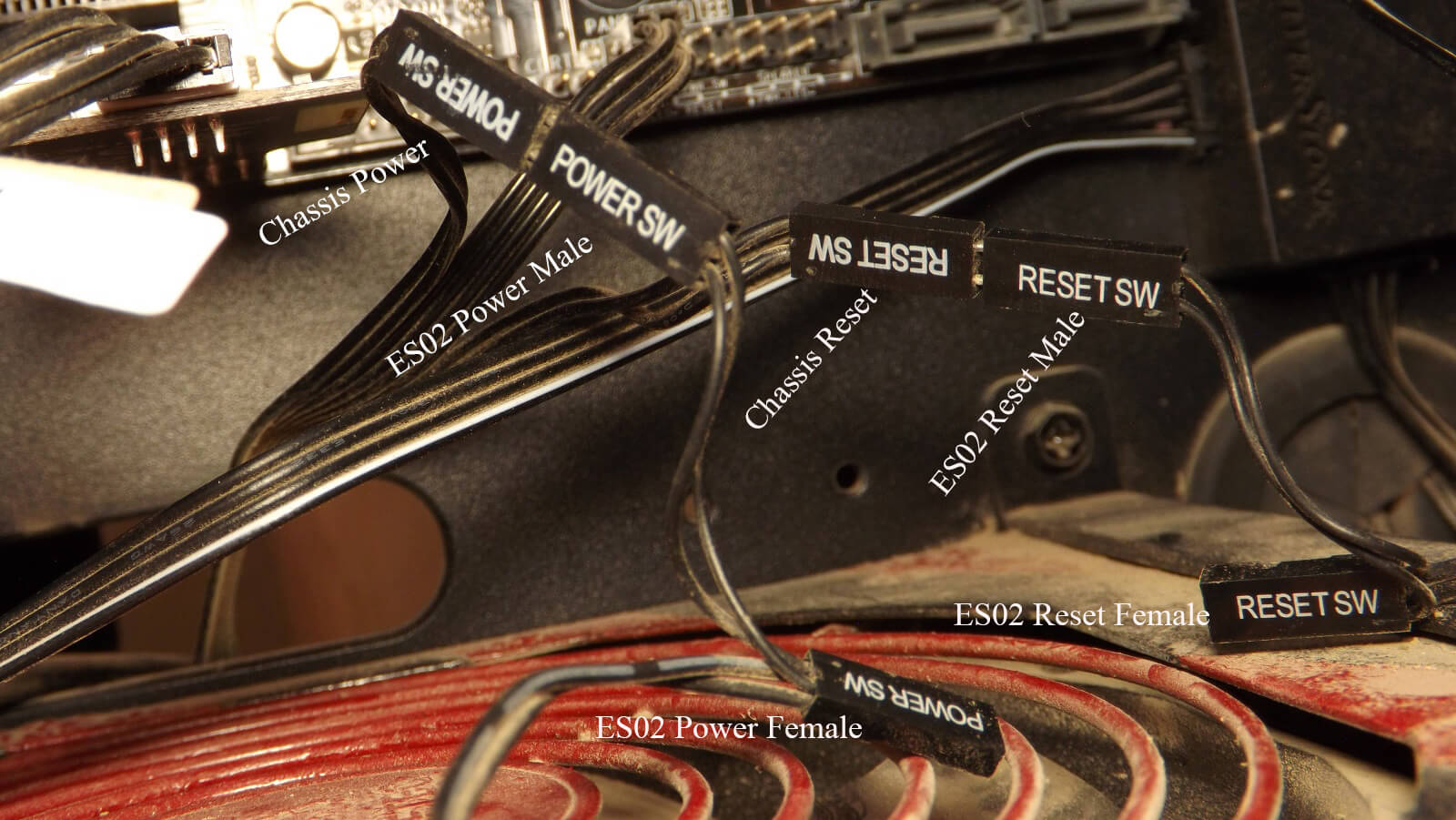 Now about the cable coming out of the ES02, it has 2x power and reset headers, though one is male and other is female. That’s because the female set of the power and reset header is going to be installed right into the motherboard so that the wireless receiver can notify which signal is being passed to the motherboard, i.e., power or reset. And the second, male set is to attach to the chassis’ front panel power and reset female headers. So now, you can use both the wireless remote connectivity and chassis’ front panel to power on and off the chassis. 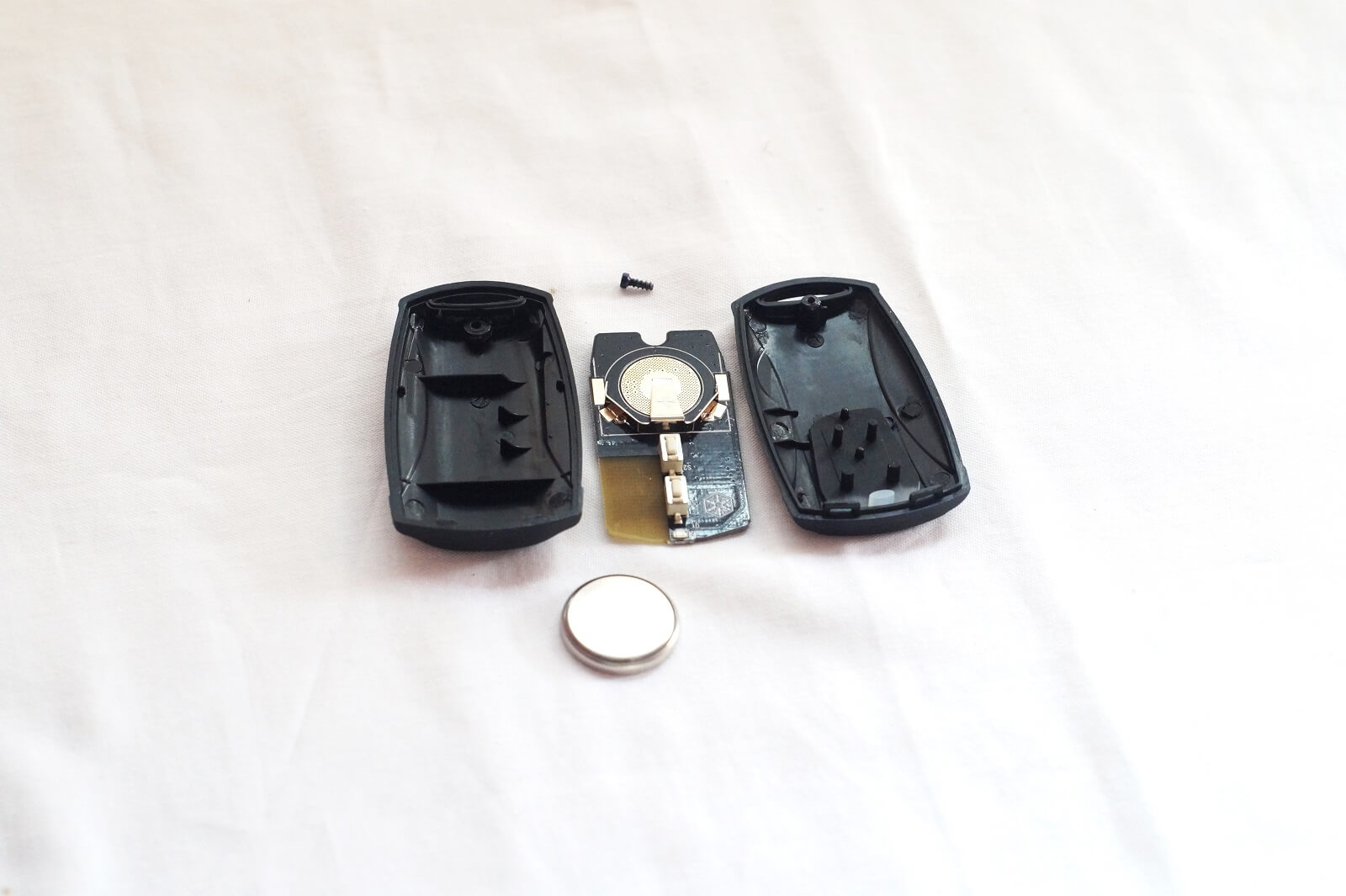 Well, you have a wireless remote controller that have both the symbols for power and reset on it, it couldn’t get any easier than that. Just press the power button once, and your system will boot up. Same is the case with the reset button. And you can still use your chassis’ front panel for this function.

Also, the LED indicator on the top of the remote will notify you by turning on that the power or reset signal has been sent. The receiver also have a LED on it so you can confirm the signal is received or not. If the LED doesn’t turn off when the button is pressed, you either insert the battery in the wrong direction, or the battery might have dried out, well that’s, of course, going to happen in the future.

All and all, this is like on of the best device one could wish for. Just imagine your siblings using the system and you messing with their system from afar without them even realizing it. Would make for a great rage video. Anyways, jokes aside, the ES02-USB seems like a great companion and something every PC user should have. More importantly, every HTPC user should have. In the end, it all boils down to the price point, and the Silverstone ES02-USB sets you back about $22.99. That might not be the best price point for the number of function the device has, but it’s still seem worth every penny. If you were to find this device on sale, I would definitely recommend giving it a try.

In the end, I would like to rate the Silverstone ES02-USB a 5/5 stars rating and give it our Editor’s Choice Award.