I have to say that I have mixed feelings about this charger. It’s small, the instructions are not written well, there are a few indicator problems, but all that aside, it did a great job charging my cell phone.

Some devices are fast. They recharge very quickly, this one took 2 hours for my Samsung Galaxy S2, but it took it from zero to 98% which was much more than I thought that it would. I honestly did not expect more than 70% at best. So, imagine my surprise.

I like that this charger has a small profile, and that it is rectangular in shape. I had one that was cylindrical once, and it would not stay in place on a table let alone on the dash of my car, or other surface. I also love the on and off button on the side. 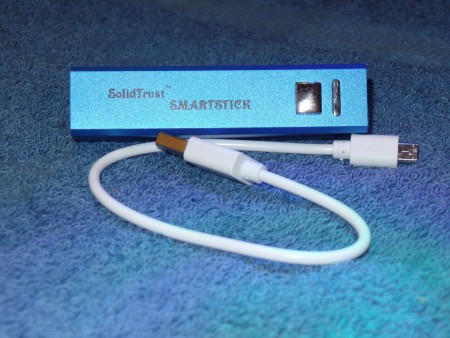 Just above the button is a spot for an indicator light. When the device is in use with a charge on it, it is blue. When charging, it is kind of an orange color. This is perhaps my only area of concern. The entire time I charged it, the color was orange. After two hours, it was still orange. I have no idea how long a charge time this charger needs to become fully charged. Since the light remains orange, how do I know if it is finished?

I tried to check the manual but there was absolutely no help there. I just could not read it. But, as most things are self-explanatory, I just gave it my best guess and kept it on the wall charger, (not included), for a little over 2 hours. Since it took that long to charge my phone, I am guessing it was the right amount of time.

The charger comes with a short cable for an android phone, so if you need to use it on an apple device, you will have to supply your own. I have noticed that with a few devices of this type so it really is not a surprise and most Apple users do have the cable type they need for their devices anyways. 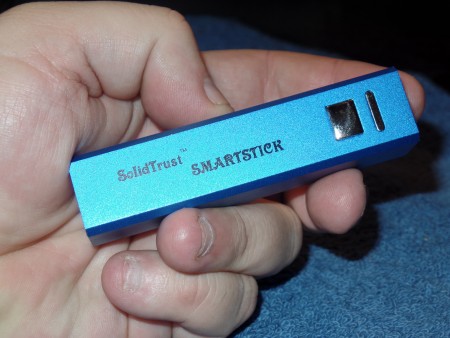 I must tell you this is not a charger for tablets or devices that require 2 amps. It is strictly for those phones and or tablets, if there are any, which use 1 amp only. Still not a problem. With the size, price, and yes shape, this is a great little charger for those who need something small and portable. I would recommend this charger to anyone who needs one.

Update, Solid Trust has offered an extension of 20% off coupon, so just use Coupon code:  P7KLC2VR at Amazon checkout and get 20% off your order!