Sony is often not the first company that comes to mind when you are considering Android smart phones, but nobody can argue that the Xperia Z isn’t one of the most attractive and full featured Android phones on the market right now.  The Sony Xperia Z oozes Sony style and has the highest pixel density screen on a 5″ screen right now at 443 pixels per inch. 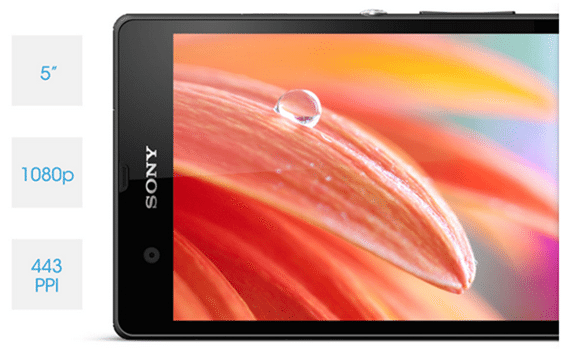 Spec wise a 1920×1080 resolution screen compared to the 1280×738 (320 PPI) screen of the Google Nexus 4 makes the image much more crisp, text specifically will stand out and colors are more vibrant.  You can fit more in less space and side by side there just is no comparison between the displays.

As far as camera is concerned, the Sony Xperia Z also blows away the Google Nexus 4 by boasting a 13 megapixel rear camera with superior auto focus and HDR, while the Nexus 4 has an 8mp rear camera and is lacking many of the features in the next gen smartphones.  A smart phone is increasingly becoming a replacement for most pocket camera’s, so camera is very important in one.  The front facing camera which is the one used for Skype and video calls is also vastly better on the Xperia Z with  a 2.2 MP 1080p capable camera while the Nexus 4 claims a 1.3 megapixel camera that can shoot up to 720p only.

Battery Life is somewhat split, with the Nexus 4 claiming up to 15 hours of talk time and 17 days of standby time, while the Sony Xperia Z claims 11 hours of talk time and 550 hours (or 22 days of standby time).  We all know battery life is very dependant on number of background processes, applications and other factors like Bluetooth however though the Xperia Z does have a 2,330mAh battery vs the 2,100mAh battery in the Nexus 4 there are many other factors which could make it hard to compare just based on battery capacity. 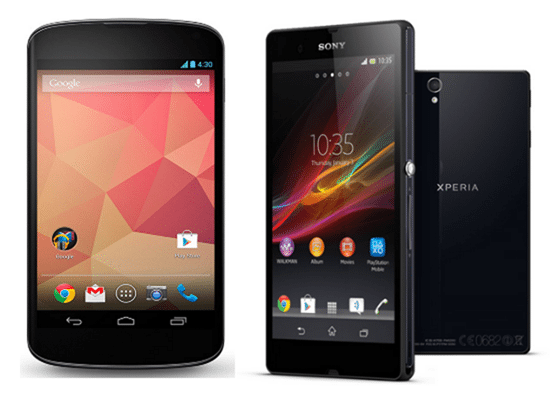 Both smart phones sport the Android 4.2 Jellybean Operating System and both sport a 1.5 Ghz Snapdragon S4 processor but benchmarks show the Sony Xperia Z vastly outperforms the Nexus 4.  In a GSMArena benchmark testing of most newer Android phone models the Xperia Z bested the Nexus 4 on all but one test, and was actually the 3rd or 4th best performing phone only being consistently beaten by the Samsung Galaxy S4 in terms of performance.  The Galaxy S4 has a faster Snapdragon 600 1.9Ghz processor too.  According to PC Magazine in a review however, the Xperia Z looks sharper than the Galaxy S4, because it doesn’t employ a PenTile pixel layout and has better video with the HDR and can shoot underwater which the Galaxy S4 cannot.

Bottom line, is Sony delivers an excellent smart phone product with the Xperia Z and I for one can’t wait to see the next generation model that will be based on the Snapdragon 600.