The world of Star Trek was on full display this past weekend as Awesome-Con brought the National Capital version of Comic-Con to life at the Washington, DC Convention Center.

Steve Winter talked to crew members and visitors at Awesome-Con in Washington, DC.

While the three-day event, which drew nearly 85,000 fans, encompassed everything from comics, memorabilia, panels, graphic artists and mainstream sci-fi and fantasy programming, there’s no question that Gene Roddenberry’s now legendary 50-plus-year phenomenon was the primary center of attention.

Seven different actors from the Star Trek franchise were on-hand, in person, to meet and interact with the fans.  Vendor booths in the massive exhibition hall featured art, knickknacks, toys and collectibles from the various series’ and movies while panels ranging from the Women of Science Fiction to Star Trek: The Next Generation Q&A packed the session halls 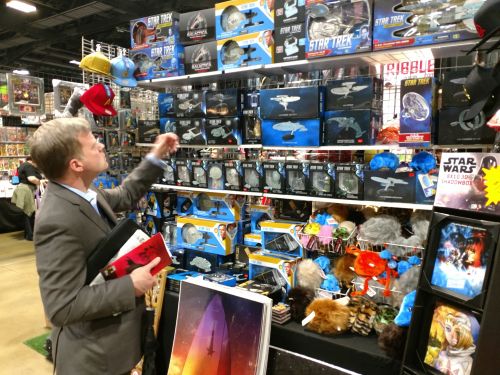 “I’ve only been to two Star Trek conventions before this one,” said celebrated Hollywood character actor Wallace Shawn, who played the small but recurring role of Grand Nagus Zek in Star Trek: Deep Space Nine.  “Without a doubt, Star Trek fans are the friendliest, the nicest, the most appreciative fans I have ever met.  They are also the most willing to embrace diversity, and they love to share their stories when they meet us.” 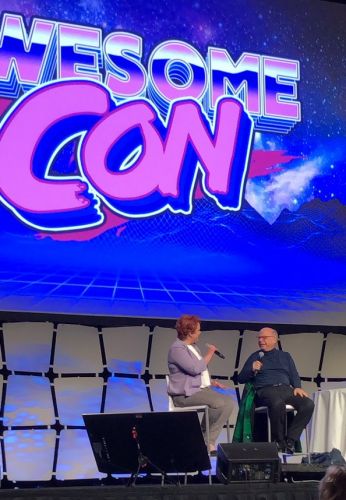 Actor Wallace Shawn speaking on a panel at Awesome-Con

Many of the stories  Shawn encountered focused on his appearances across the nearly 200 separate productions throughout his career.  Likely best known for role as Vizzini in beloved film The Princess Bride, Shawn was also a regular on such major television shows as Gossip Girl, Crossing Jordan, Teacher’s Pet and presently Young Sheldon.  His legendary voice-over work has rendered narratives for everything from Family Guy and The Simpsons to Toy Story.

Yet while Shawn’s fans were attracted by the actor’s full body of work, most were lured by their pure love of Trek.  Terry and Larry Moore, attending with their one-year-old son Jonas, attended Awesome Con for the opportunity to learn more about science through science fiction while exposing young Jonas to the genre.  Of course, as Larry Moore freely admits, that wasn’t the only reason.  “We’re here to get photos as well, with Jonathan Frakes, Marina Sirtis and Gates McFadden.” 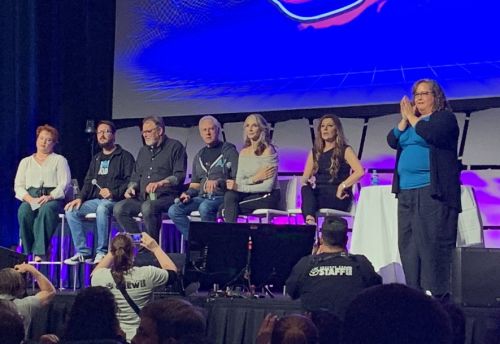 Throughout the weekend, fans had the opportunity to take those photos while also interacting with five cast members from The Next Generation – Frakes (Commander William Riker), Sirtis (Counselor Deanna Troi), McFadden (Dr. Beverly Crusher), Brent Spiner (Lt. Commander Data) and Wil Wheaton (Ensign Wesley Crusher).  Joining them was veteran actor Jason Isaacs, who played Captain Gabriel Lorca in the opening season of Star Trek: Discovery, but who is probably best known for his role as Lucius Malfoy in the Harry Potter movies. 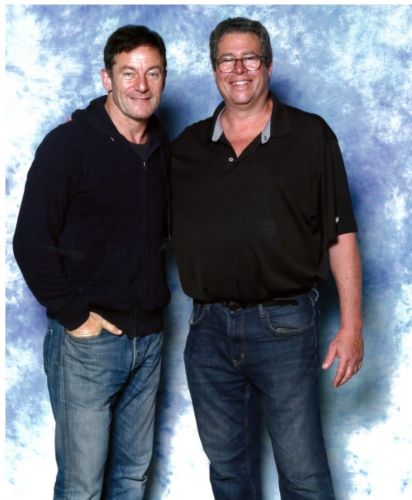 Occasionally, however, the impact these actors deliver to their fans goes far beyond pure hero worship.  One woman waiting in line for a photograph credited McFadden’s Dr. Crusher with literally saving her life, citing the character’s strength, independence, passion and problem-solving ability with giving her the will to avoid suicide.  “These are the sorts of stories you often hear about at shows like this, usually many years later,” McFadden said.

Sirtis said she experienced much the same thing.  “Most of the feedback I get from fans  is that a lot of the time, TNG helped them through a difficult time in their lives,” she said.  “It was family time for a lot of people, and it was the only thing that they did together. If the parents had passed, it was a time when the family came together and watching the show brought back a lot of fond memories.” 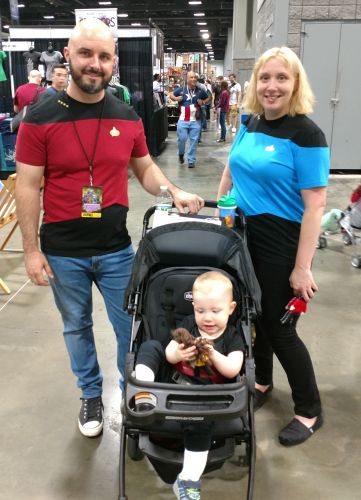 For Star Trek fan Lauren Rapp, Awesome-Con simply provided a grand opportunity for her to meet Sirtis in person.  Clad in a blue floor length dress similar to that sported by the Betazoid counselor aboard the Enterprise-E, Rapp was absolutely giddy as she waited in line leading up to her momentary encounter.

“I’ve been waiting about 25 years or so to meet her so I’m very excited,” Rapp said.  “I’ve been a big fan since I was a kid.  Deanna Troi is a strong, female character with great leadership skills, yet is also empathetic.  To me, that’s a big deal.”  Lauren’s brother Ryan Weaver shared his sister’s passion.  “I’ve been watching the show since I was five years old.  I have already – in the past – met Patrick Stewart, so for me, it will be great meeting Jonathan, Marina and Gates.” 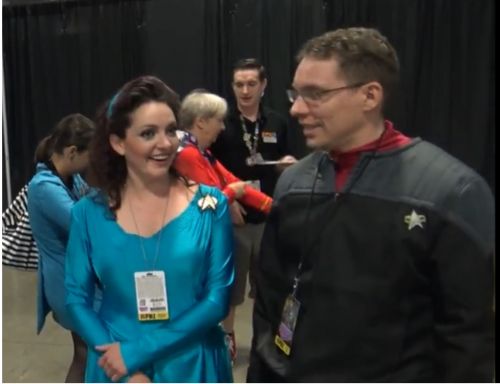 While Star Trek fans were clearly enjoying their euphoria weekend in Washington, other popular culture genres attracted their fans as well, as comic book artists, illustrators and publishers rubbed elbows with NASA engineers, video game producers and graphic novelists.  And with celebrities and programming ranging from Battlestar Galactica, Riverdale and This Is Us to cast members from the NBC-TV hit The Office, there was truly something for everybody. 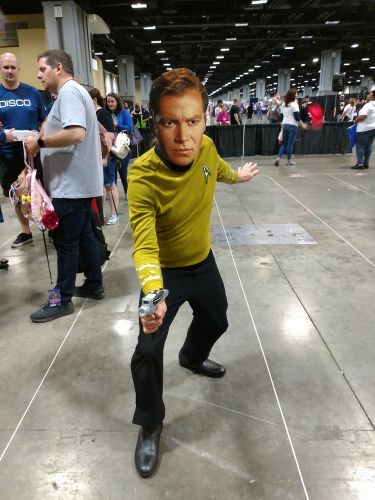 Hey, even Weird Al Yankovic was there.

And that pretty much says it all!