MMO fans have been anxiously waiting for this release and now that Star Wars: The Old Republic has hit the shelves, one question in on everybody’s lips. Has BioWare succeeded in creating a title that can overthrow World of Warcraft, or is this just a cheap surrogate in space that has its days numbered. Time will tell and trying to come up with a definitive conclusion just a few days after the game’s release is both risky and silly. For the time being, it is only fair to say that Star Wars: The Old Republic looks terrific and has all the required ingredients to thrive, despite the seemingly crushing competition.

A universe worth exploring 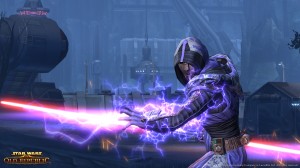 BioWare’s release capitalizes on the outstanding storyline and aims farther than attracting those dedicated fans of the franchise. Star Wars’ saga spans over decades and all around the world there are people excited about the prospect of getting immersed in the captivating universe they’ve seen on TV. Quests are in abundance and with over fifty planets to explore, it is downright impossible to ever get bored or to find your missions repetitive.

It all begins with the character selection and this stage can be considerably longer than you’d expect, as BioWare doesn’t take customization lightly. After choosing your allegiance and joining the Light or the Dark forces, you have to decide what type of character you will be playing. It is rather underwhelming and despite the huge diversity of characters that populate the Star Wars universe, your choices are not too many. They all look very good though and so does pretty much everything in Star Wars: The Old Republic, with superb graphics being one of the its assets.

Walking down a familiar path

The combat system is fairly simple and difficulty increases gradually as you progress with the campaign, so you shouldn’t set your hopes too high. Lightsaber battles will eventually come, but in the early stages, the duels and fights will be decided by a few attacking strokes. The universe itself is amazing, so you will encounter various foes while trying to complete the quests, with diplomacy being in most cases more effective than confrontation. The art of dialogue has been perfected in Star Wars: The Old Republic and even NPCs are very articulate, with the lines of conversation being quite impressive.

While it has many common features with World of Warcraft, this is not necessarily a bad thing, because Blizzard’s flagship title is the best MMO ever created. Star Wars: The Old Republic has the prerequisites to replicate its success and with a lore that rivals the one in WoW, BioWare should find it easy to follow up with an expansion. It is way too early to discuss about the endgame content and comparing it to what Blizzard has been brewing is pointless, because Star Wars: The Old Republic is still in its infant stage. The future looks bright though and it’s only fair to say that the force is strong with BioWare on its quest.

If you love lightsabers, you will surely love this: