In my adventures online in meeting other streamers I ran across a streaming muppet who goes by LarryIRL.  This muppet was talking to his audience and was extremely engaging and entertaining while also playing games on stream.  I was so utterly intrigued by this unique entertainer that I was compelled to learn more so I contacted this creature on Discord and inquired if I may have an interview with him.  So I invite you to learn more about this muppet that entertains us every week! 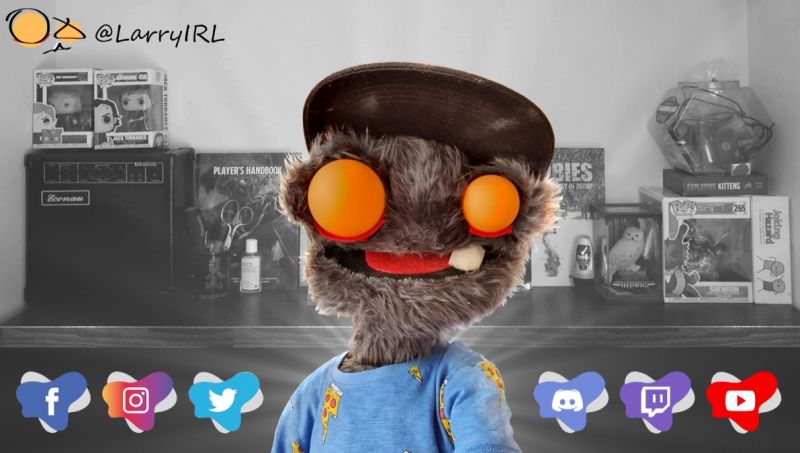 Justin – Tell our readers about yourself (notes include name (or just handle) where you are from…etc. (This can be in character) 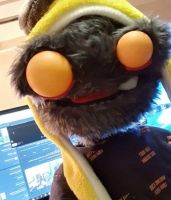 LarryIRL –My name is Larry, in real life, in case it wasn’t clear from my social media handle. I’m an entertainer & a muppet, which is kind of the same thing. I’m a Gamer, Musician, Streamer, D&D nerd, Burger Enthusiasts, Coffee Lover, Friend Haver, & probably some other things.

Despite popular opinion, I don’t hang out on Sesame Street nor am I related to Oscar The Grouch or the Cookie Monster. I do however enjoy streaming & posting my own opinions on the internet. I pretty much enjoy any creative pursuit so long as I get some enjoyment out of it but mostly I’m just a muppet that likes to make people laugh.

Justin – With dark colored hair/fur!? like that I bet nobody notices if you spill coffee on yourself.  You do have quite the range of hobbies and I love your pizza shirt.  When did you first realize you wanted to start streaming and when did you first start?

LarryIRL–My introduction to streaming was all was very spur of the moment. Most of what I’m about to say happened in a matter of 2 to 3 days. I’d never really been involved in Twitch or any other streaming platforms outside of maybe YouTube but that in my opinion is very different & not really a dedicated live streaming platform. In the weeks leading up to my start I had been watching a D&D show called Critical Role. Critical Role has such a large & welcoming community, I really wanted a place where I too could build something like that & Twitch seemed like the obvious choice. I think I decided I wanted to start streaming on a Friday & went live for the first time, two days later, on the Sunday. It’s been just over a year since I started streaming now & I still enjoy every moment of it. Yes it has had its ups & downs however I attribute my continual growth & success to my community. I’ve always kept my focus on fostering my community rather than views, money, exposure, etc.

Justin –  You are now the second streamer in 2 weeks that said they were inspired by Critical Role to come up with the idea for streaming and entertaining and audience.  You are also re-iterating what many streamers keep saying as well about focusing on the community and not the numbers.  I know you mentioned Twitch and YouTube, but what streaming platforms do you go live on most often (Twitch/Mixer/YouTube…etc)?

LarryIRL– I always stream from Twitch. Twitch has its downfalls but is the most mature of all the options out there. Plus it’s community is unrivalled in this industry.

Justin –  Yeah Twitch is the dominant for sure, even in the recent analysis with Ninja going over to Mixer, results of watch time shows Mixer didn’t have any gains in watch time with Twitch taking up majority at 75% but YouTube does have 17.6% of the market and YouTube is showing gains so you never know. Some say the smaller platforms are easier to stand out and care a niche vs the giant sea on Twitch now.  I personally am fully invested in Twitch but maintain Mixer/Dlive/Facebook profiles, my YouTube is large but for created content not live streams typically.  What devices do you prefer to stream from?  (Console, PC…etc)

LarryIRL– I always stream from my PC, unless I’m doing an IRL stream where I’m away from my set up. Mostly this comes down to necessity, I don’t own a capture card & I have way too many games in my steam library. I would like to purchase a capture card soon because I do have a few console exclusive games I’d like to stream. Ultimately PC gives you more options as well which is always a good thing.

Justin – Yeah, even console streamers benefit from having a PC and Capture card, consoles themselves are extremely limited in what you can do with a live stream in regards to overlays/customizations and such but most people on a budget or who don’t have a PC or one with a capture card stream from consoles.  I agree though that PC streaming is the best platform by far.  What is your preferred streaming hardware/PC/software setup (PC Specs)? (Webcam, Elgado Streamdeck, SLOBS/StreamElements…etc)

LarryIRL– Ideally I’d have a dual PC streaming set up but my machine does the trick for now. My current set up includes, my pc, two monitors, a Rode mic, a Logitech C922 webcam, an Elgato Stream Deck, my headphones, a green sheet, & a desk lamp. I use OBS Studio for streaming, I’ve tried most of the alternatives but OBS provides the most flexibility. I use Streamlabs for my alerts, Streamlabs Chat Bot as my bot, & Stream Elements purely for it’s Kappagen feature..

Justin – I have seen Kappagen and it is very cool from Stream Elements, I use SLOBS primarily myself with Cloudbot instead of Chatbot, it is more limited but easier to manage because I have 7 streamers all using my same Twitch account and wanted something cloud based for configuration.   What is your short term goal < 3 months and long term goals with streaming?

LarryIRL– I’d really love be in a position in my career that allows me the freedom & opportunities to create, play, & share daily with other other entertainers in the industry without being restricted by time or finances. This is my main goal, as for small goals, I’m always working on so many projects so I have a lot of different short term goals right. Most of them are focused on bringing new people into my community, so collabs, interviews, attending events, befriending people, & simply going live more often. 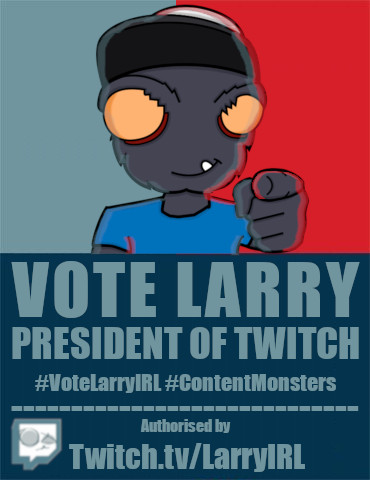 Justin – Yeah, probably the most common response from streamers is to bring in enough income to stream full time to entertain people and not have to worry about struggling to make ends meet or holding down a day job and entertain on the side.  I am also someone who is running many side projects while holding down a day job.  Do you have any advice you give to other people wanting to get into streaming and entertainment?

LarryIRL– Be welcoming & interactive. Always look for ways to better yourself & your stream. Care about your community, take an interest in each & every person, you won’t remember every detail about every little thing happening in their life, but make the effort anyway. Even if you forget something it’s still better to say “Oh that’s right I forgot you were studying so & so, congrats on graduating!” rather than nothing at all. On that note, make as many friends with people in the industry as you can, spend time chatting in other peoples streams or simply comment on their social media post. The biggest mistake I see people make on social media is forgetting to be social. They post heaps of great content all the time & wonder why nobody is taking an interest in it & them. You can’t just post media, you have to be social as well. Engage with other people, like their tweet, comment on their posts, share their dumb meme, form relationships with people. The more you take an interest in other, the more they will reciprocate. Eventually people will start asking after your next post before you’ve even shared it, even still, never stop interacting!

Justin – Very good advice and you really summed it up quite well about social media being about being social, not only one way posting about yourself.  If people are going to spend their time watching someone, the reason why live streaming is popular instead of going to the movies, watching TV shows or non-interactive YouTube vids, is that with Twitch you really can build a real time connection with your viewers and interact with them in a way not possible with other media.  It is a live performance, I mean some who are e-Sports pros can just focus on showcasing the game, the wins, but for the entertainers this is where you create a fanbase.   Where, When and What Can People Find You Streaming and What Can They Expect From Your Streams (types of games, unique entertainment style/games)?

LarryIRL– I love gaming so I mainly stream games that I like however sometimes I do IRL streams or we just watch video & talk nonsense. My channel is very interactive, we have many !commands that when typed into the chat trigger things live on my stream. I’m a muppet/puppet, think Sesame Street but for adults. Everyone is there to have a good time & despite the shenanigans we try to keep it friendly. I go live 9am AEST (GMT +10) Tuesday to Saturday over on Twitch.tv/LarryIRL

Justin – Yeah when I was watching your streams I was thinking Sesame Street meets ALF meets Crank Yankers though you are generally cleaner than Crank Yankers was.  Do You Want to Give Any Shoutouts or Promote Anything?

LarryIRL– Come join the Content Monsters community! It’s a great place full of amazing content creators like yourselves! We have YouTubers, Streamers, Artist, Musicians, Super Villains, Herpes, you name it we’ve got it! Apart from that, if you like dumb opinions & funny videos, follow me on my social media, my handle everywhere is LarryIRL.

Justin – So Larry do you have a master/controller or handler (what would you call it?)

LarryIRL– I’m just a real life muppet trying to show the world that not all muppets hang out on Sesame Street, some of us have regular day jobs, eat burgers, & play video games on the weekend. As for the how do I do it part of the question, I do it just like everyone else, with a sweaty naked guy next to me, a hand on my mouse & the other up the puppet hole.

Justin – Thank you so much for the Interview Larry in real life, and I want to encourage all my viewers to check out this very unique character and his game streams.  I am so glad I ran into his channel and got to see this very original and entertaining streamer who does a great job having two way conversations with the audience.   Plus I am always a fan of other D&D players in general, shout out to D&D and all the RPG tabletop lovers out there.  That was my inspiration for Dragon Blogger and people how dragons are my thing.