So another just really nice guy I ran into a few weeks back while supporting various Team B42 streamers was FREAKIN_POPO and I happened to visit him during his birthday stream where he was all dressed up on his birthday stream.  I enjoyed how he interacted with viewers and his fun little police themed gifs and stingers that played throughout his stream.  He was very friendly toward his audience and super supportive of others in the community, I see him raid and visit other channels frequently and bump into him on other people’s streams as well.  So here is an interview with FREAKIN_POPO. 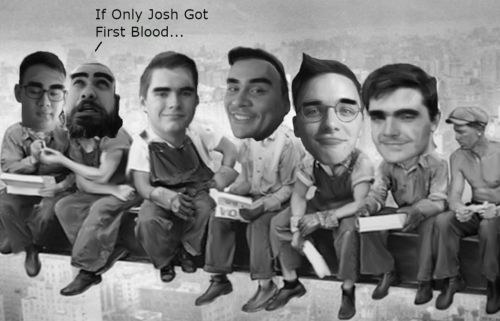 Justin – Tell our readers about yourself (notes include name (or just handle) where you are from…etc. 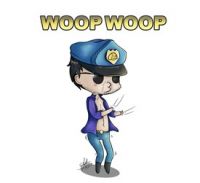 FREAKIN_POPO – My name is German (born in Germany, trust me, parents weren’t all too creative on the name) but most folks on Twitch refer to me as FREAKIN_POPO! I’m originally from Germany but I moved to the states back in 2011. I am in no way, shape, or form an actual police officer – it’s more of a handle that came on from gaming with buds. I am, however, a streamer, college student, gamer, somewhat D&D nerd, goofball, and a certified Goon!

FREAKIN_POPO – Getting into streaming was actually one of those “spur of the moment” type of situations. I would hop on Twitch every now and then to watch some gameplay of a game I debated buying or to watch some people I had met IRL who streamed, but outside of that, nothing super special. One day I caught an old friend of mine that I hadn’t spoken to in like 7 or 8 years streaming, so I popped on in and started chatting with them. Asked them how streaming was and their opinion on it. They gave their input on it and I thought to myself: “Huh. Now wouldn’t that be cool to try sometime?” Well, I did try. One day back in like May of 2018 I decided to just go, “Screw it, why not stream?” So, I launched up PUBG, launched the Xbox One TWITCH app, grabbed a couple of buds, and hit the go live button. Honestly, probably one of the best decisions I’ve made. It’s been about a year now and I’m super happy I took that first step and decided to get into all of this. I ain’t the best in the business, nor do I ever expect to be, but the friends I’ve made and the moments that have been shared – priceless.

Justin – Nice, yeah sometimes people just “fall into it” without having an intention to be a streamer at first.  What streaming platforms do you go live on most often (Twitch/Mixer/YouTube…etc)?

FREAKIN_POPO – I stream primarily from Twitch. When I first started out I looked up the others and checked them out, but never really took the chance to actually commit to the others. Twitch has it’s ups and downs at times, sure, but it’s still pretty great in my opinion!

Justin – As you know we also stream to Twitch but are looking at some streams on Mixer, YouTube and Facebook to keep presence up on all media platforms. What devices do you prefer to stream from?  (Console, PC…etc)

FREAKIN_POPO – I primarily stream from PC/laptop. I don’t have a capture card for the Xbox, so I end up funneling whatever I’m playing on it through the Xbox App on the PC. Not the best solution, but eh – do what you gotta do! I do hope to eventually get one to boost the quality of those games I stream from the Xbox. Outside of that, PC is pretty nice to stream from just because it’s pretty convenient. Just launch up the game, set up your recording software, bada-bing bada-boom. Having custom overlays and your own personal style for it too is also a bonus! Plus there seems to be a lot of variety when it comes to games on the PC – ya know, variety is the spice of life! That being said I still have so many games to clear through on my library so whoops.

Justin – Brian from our team doesn’t have a PC and streams direct from his Xbox One too, so it works and he even uses a webcam now.  But nothing beats having SLOBS/OPS/StreamElements stuff to overlay and add to your stream while streaming.  What is your preferred streaming hardware/PC/software setup (PC Specs)? (Webcam, Elgado Streamdeck, SLOBS/StreamElements…etc)

FREAKIN_POPO – I’ve got myself a bit of a weird setup, at least in my opinion. I’ve got two different gaming laptops that I use for streaming – one dedicated to whenever I stream console games and one dedicated to PC games. They aren’t exactly top of the line builds but they get the job done. I also use a HyperX Cloud headset, the webcams provided on said laptops, and a lamp just for some extra light. For streaming software I use OBS, just because when I first started SLOBS just refused to work with me. I do use Streamlabs for the alerts and StreamElements as a bot for chat commands.

Justin – Nice dual laptop setup, and I do see some streamers picking what they like from OBS Studio, SLOBS and Stream Elements and kind of creating hybrids of all 3 components that work best for their channel.  Like we use OBS Studio and Firebot for Mixer streaming and SLOBS with Cloudbot for Twitch streaming. What is your short term goal < 3 months and long term goals with streaming?

FREAKIN_POPO – As far as short term goals for streaming, I’d say probably just try to keep a consistent schedule while in college and continue gaining momentum/growth in streaming. Whenever college is around I tend to only stream weekends – education first and all! Outside of that, just trying to make sure I provide enough entertainment for those who take the time out of their day to even watch me is my goal. Long term I think I’d be pretty happy if I made it to partner or even got the ability to apply for it. I don’t think I’d ever be at a point to just be a full-time streamer but making it that far would be pretty neat.

Justin – Cool yeah, I know a number of streamers who are doing it part time while in college.  Do you have any advice you give to other people wanting to get into streaming and entertainment?

FREAKIN_POPO – Interact with your chat, be open and friendly, and just have fun. Keeping up with your chat and communicating with them lets them know that you’re acknowledging their presence and the time they dedicate to watching you. Being open and friendly allows you to form connections with your viewers and potentially pull in new ones – good first impressions are always important in any social circle. Finally, the most important thing of all is to have fun. Each time you hit that “Go Live” button, you should go in with the mindset of having a good time. Going in with a negative attitude or perspective isn’t going to end well, especially in the long run of streaming.

Justin – Really good advice, I tend to avoid streamers who have anger, rage and just generally unhappy personalities.  Nothing makes me flee a channel faster than when someone isn’t havign fun and is constantly upset or angry while streaming like constantly, but that’s just me perhaps.  Where, When and What Can People Find You Streaming and What Can They Expect From Your Streams (types of games, unique entertainment style/games)?

FREAKIN_POPO – You awesome folks can find me over at https://www.twitch.tv/freakin_popo. The “when” depends on what time of the year mostly. During the college semester you can find me live Friday to Sunday generally starting in the morning and ending sometime in the afternoon/evening. During breaks its pretty random – just any point of the day almost everyday of the week. I’m a variety streamer so I just play anything that I consider fun or something that I can play with friends/viewers. I’d also consider myself pretty goofy and laid back. 90% of the time you see me I’ll probably be smiling or laughing out loud.

Watch live video from freakin_popo on www.twitch.tv
Justin – Cool man, I try to visit as often as I can.  I like your style! Do You Want to Give Any Shoutouts or Promote Anything?

FREAKIN_POPO – Well, this might be a bit of a list so prepare yourself – apologies in advance! I wanna shoutout my bois, the OG POPO Crew – Dallas, John, Josh K., Donavain, and Lane. They were there for me when I first started and supported the hell out of me, encouraging me and pushing me to keep on streaming. Couldn’t be more happy to have them as my brothers! Next I gotta thank my brothers over in the Xtreme Fuckery Crew – Josh M., Connor, Nick, Luke, Washaun, and Jason. Y’all have been just as supportive as all the rest and have backed me since starting up as well. Thankful for y’all as well! I also want to go ahead and thank you Justin for even reaching out to me and offering to interview me. I was actually quite surprised when you approached me on Discord! So thank you man for the epic opportunity – you rock my friend! Finally, I wanna just give a big ol’ shoutout to the awesome people in Team B42 (led by Benda42) and Phoenix Cartel (led by Poxxers). In those communities are extraordinary individuals who have shown me so much love and support that I doubt I’ll ever forget the things they’ve done for me. There’s so many people from both communities that I think if I tried to list all of them it’d probably take like…hours. So thank you, everyone, for all that love – you’re the best and I love you all!

If you ever wanna catch whenever we’re chilling, goofing around, or streaming, always feel free to jump on into the POPO CREW Discord and join us.  Trust me – you’ll be welcomed with open arms! https://discord.gg/5U5zSju