Our friends over at RokitBoost sent me their SwageU Bluetooth Headphones to test out and review. When it arrived I thought “awesome I can talk on my phone again will driving!”. My state just recently  started the hands-free law for drivers so it was imperative I use something hands-free to talk on calls while driving. The package RokitBoost sent with the SwageU EVO packed in it is a plain white box. It contains most of the details that you need to know about the device. As seen in these next two pictures. 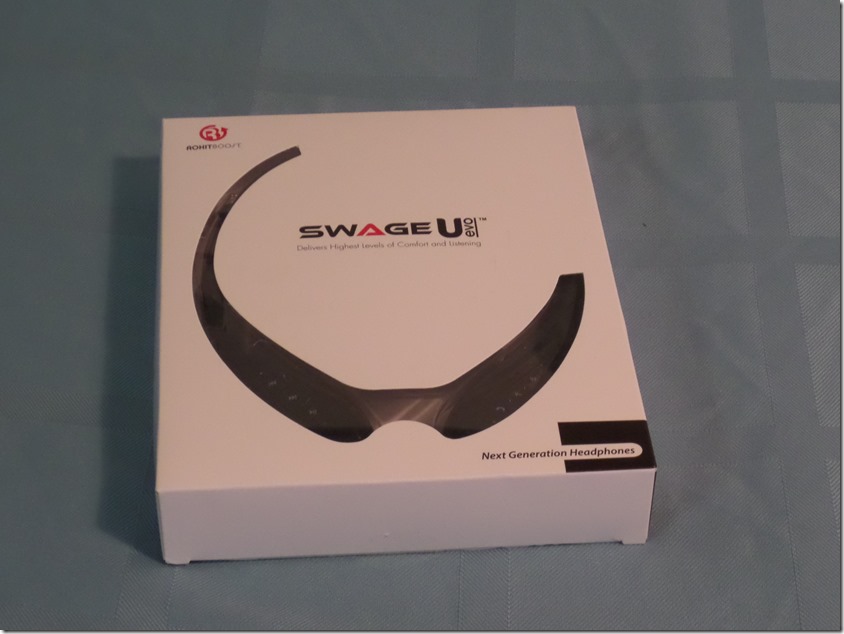 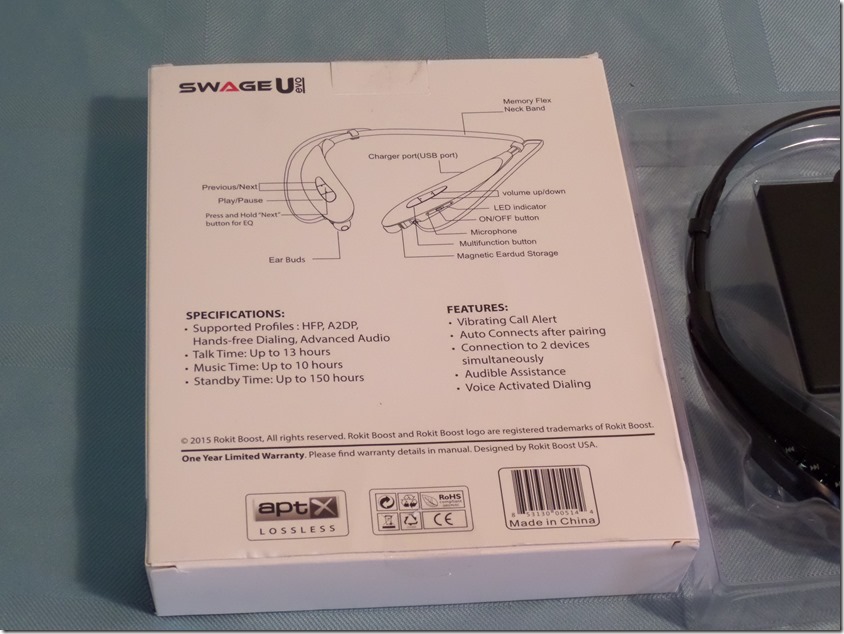 The SwageU EVO headset by RokitBoost  is a collar style headset. Now to me the shape and design reminds me of the old CD walkman headphones but sleeker and with buttons. The SwageU EVO come with a USB charging cord, Instructions manual, and extra ear bud covers. 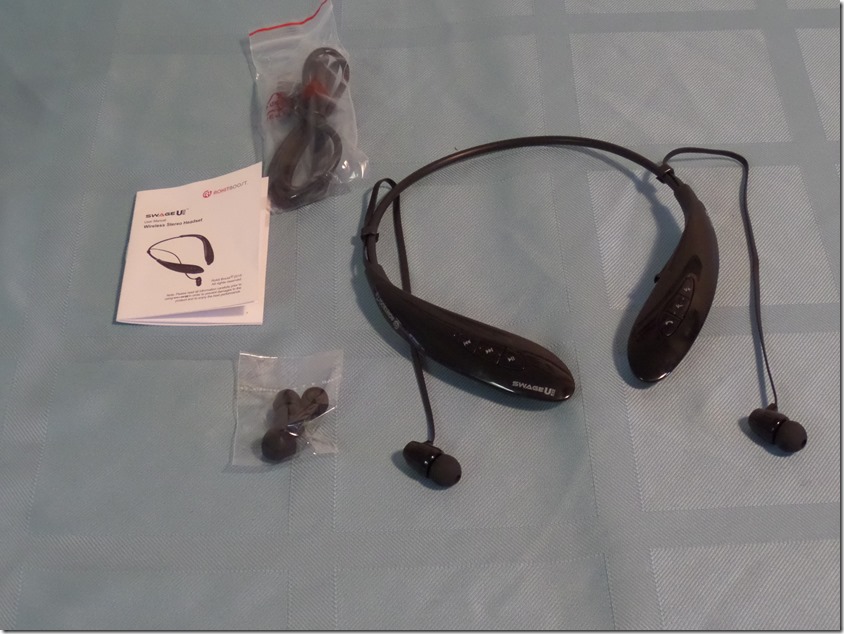 Pairing the device to your phone or music device is rather easy. You turn the power on, wait for the light to flash from orange to blue. Then you go to your phone or mp3 player and connect via Bluetooth pairing. Then you are ready to go. Once that is done you can listen to music, or make calls. The SwageU EVO can be placed around the collar of your neck and rests comfortably on your collarbone. Then the ear buds come of the device to place in your ear. The ear buds are magnetic so they can be placed back on the device when not in use and just snap back into place. The SwageU EVO has phone and music buttons on the device. You can turn the volume up or down and you can swap between songs or calls. They claim it can do hands free voice calling as well, but my phone does not have voice assisted functions and couldn’t test the voice assisted calling compatibility.

The SwageU EVO is a curved design so it fit’s rather smooth. It is also light and not really noticeable that your wearing the device when it is around your neck. One thing I will state now is if your someone like me with a rather large neck the device is a little awkward to use. I did have my kid and wife use it also. Now they could reach the buttons better then I could which was nice.  As you can see in the next to pictures, there is a rather large deference in how the fit on me compared to my daughter. 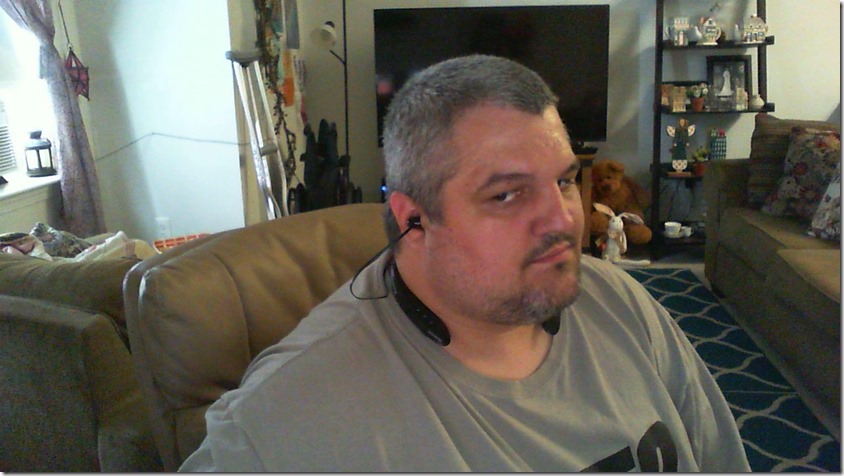 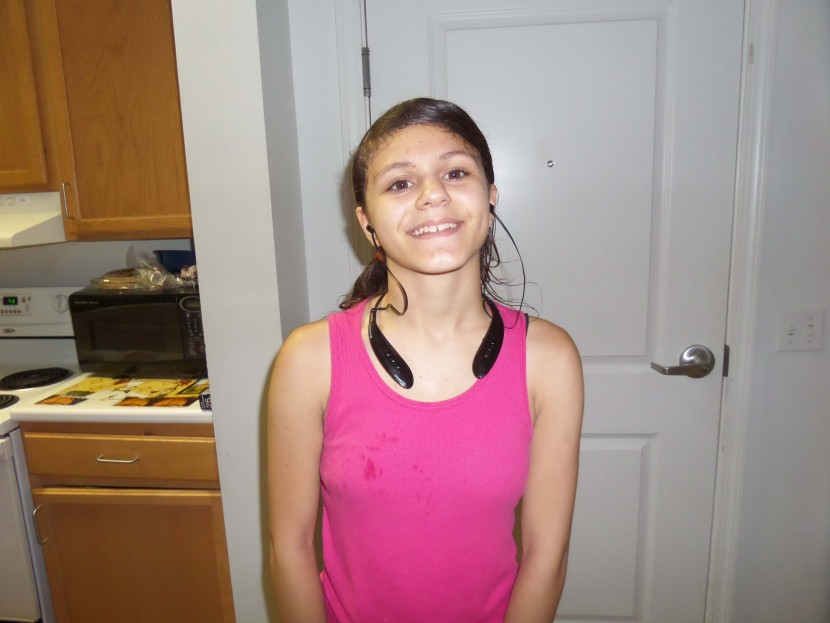 Like I said that probably has to do with my 20in and half inch neck. Either way it can be used just a little harder to reach the buttons and not hit the wrong one.

Now when I was testing it I tested sound quality, fit, feel, and battery life. As you already hear about the fit of the device, I will tell you about the sound quality. If you are using it to talk with it sounds rather decent. You can talk and chat when running or jogging and there is minimal wind interference, the mic does a good job picking up your voice without background noise and you can even hear the person on the other side when riding in the car with the window down which is really nice. When listening to music however, I found it loses a little something. I put the SwageU EVO through it’s paces with Rap, Heavy Metal, and some south African dub set style music. When listing to Pantera, it sounded rather decent. Once you drop the SwageU EVO on to some dub step like DIE ANTWOORD, the bass starts to sound off likely due to the small drivers and it gets a bit buzzy. This also happen when listing to rap music as well to some extent. Now I’m sure that because these are not specifically meant for major bass heavy music, and I don’t compare them to earbuds that are three times more expensive and specific for bass heavy music. But I can say that these earbuds are more designed around talk, sport and are not designed towards the high end music crowd (audiophiles) if you are really looking for crisp and superb music clarity in earbuds. For the price and what they are the are however an excellent price/feature point and I highly endorse and recommend the RokitBoost SwageU EVO headphones.

On battery life, RokitBoost claims you can listen to music for up to 12 hours non-stop, and up to 15 hours of talk time. So I used the SwageU Evo all day to listen to music until they died. I only got 10 hours out of them the first time, so I charged them back to full and the second time I got 10 and a half hours from it. Which is not quite the 12 hours, but there could be other factors and I still think 10 – 10 1/2 hours of music listening time is very impressive for Bluetooth earbuds.  I did also have my kid use them on another day for chatting and she has rather long talk times with friends but we didn’t get to time it. This was because being she is a kid and kids cant stay still long enough.  I am sure it was many hours though and you probably will be satisfied with the battery life of the headset.

With all being said and done the RokitBoost SwageU EVO is nice device that functions well. The SwageU EVO can be used by almost anyone. If they want to use it for calling or music it does the trick. From the gym to the person on the go. The SwageU EVO is a device I can see many using in the future.