Nomad Games launches the third digital expansion for Mystic Vale on all platforms today, available separately or as part of the Mystic Vale season pass.

Nomad Games, an independent game developer and publisher, has released the Mana Storm expansion for the deck building card game Mystic Vale on iOS, Android and Steam today. Mana Storm brings new features to Mystic Vale, with new advancements, vales and leaders increasing the crafting options and combo possibilities. Also included in Mana Storm are ‘Amulets’ – an all-new mechanic that replaces your mana token with a unique amulet, each with special abilities that effect how you play. 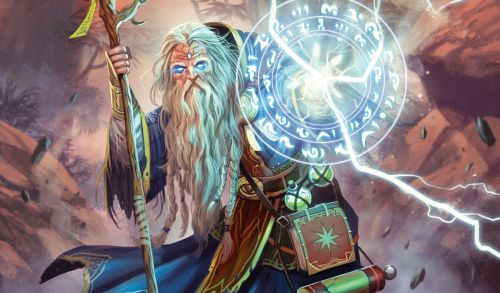 Mystic Vale is an award-winning traditional card game published by Alderac Entertainment Group (AEG). Working closely with AEG, Nomad Games developed this digital edition to be faithfully accurate to the original card game. Since releasing the digital version of the original game, Nomad Games have been hard at work bringing the first 3 physical expansions for Mystic Vale to life for digital players.

In Mystic Vale, players can play against the AI or online in 2 to 4 player matches. Taking on the role of druidic clans players must cleanse the curse placed upon the Valley of Life. In Mana Storm, even more druidic clans have joined the battle to cleanse the land!

“We’re excited to bring another expansion to the digital version of Mystic Vale – The base game was already an excellent introduction to the deck building genre and is a visually stunning game to play. We hope that existing fans will enjoy what Mana Storm brings to the table!” – Don Whiteford, Nomad Games MD.

A curse has been placed on the Valley of Life. Hearing the spirits of nature cry out for aid, clans of druids have arrived, determined to use their blessings to heal the land and rescue the spirits. It will require courage and also caution, as the curse can overwhelm the careless who wield too much power.

Mystic Vale is a deck-building card game, in which players take on the role of druidic clans trying to cleanse the curse upon the land. Each turn, you play cards into your field to gain powerful advancements and useful vale cards. Use your power wisely, or decay will end your turn prematurely. Score the most victory points to win the game!

Nomad Games is an independent video games developer and publisher based in Lymm, Cheshire. It was formed in 2011 by a small team of veteran digital developers, with over 20 years of experience. The company is at the forefront of the digital tabletop genre on a wide variety of platforms. Best known for the digital version of Games Workshop’s classic board game Talisman, which has sold over a million units on PC, Mac, Android and iOS formats. For more information visit www.nomadgames.co.uk