Getting Your VR Legs 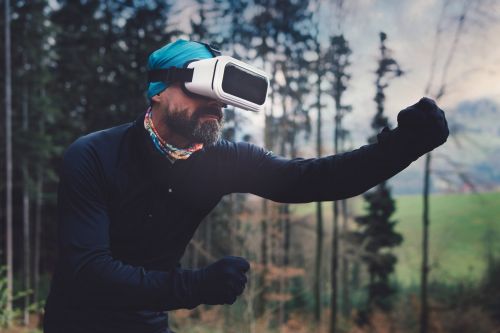 Many people are starting to claim that you can get your VR legs in the same way you can get your sea legs. In other words, they are saying that VR sickness is something you can learn to avoid, but this is simply not true.

If you have sea sickness, you probably wouldn’t fill your stomach with greasy fish and then go falling about a boat on high seas. You would probably eat something binding, or eat nothing at all, you would probably take sea-sickness pills, and probably take it easy on the boat rather than running around like a mad person. VR sickness has its own set of rules whereby somebody can get used to VR so that they become sick less often (or at least less easily).

Teaching Your Brain to Understand the Ground

This sounds a little nutty, but most VR sickness happens because your brain is tricked into thinking the floor in the game is actually the floor in real life. Ergo, whenever your head tilts even slightly, your brain thinks the floor is moving.

Luckily, this is one of the things that you can teach yourself over the years. With repeated exposure to VR, you can teach your brain that the floor you are touching with your feet is not the same one being shown through the VR screens. However, the better you become at differentiating, then the less immersive your VR experience becomes (which is a shame).

Not Tilting Your Head as Much

Do you remember Terminator 2 and how Arnold looked from left to right? His head never tilted. If you do not tilt your head while using VR, then you will find it oddly easier to avoid VR sickness. Sadly, most people are not robots and ergo cannot keep their head perfectly level while they are gaming.

Games Where You Cannot See the Floor

There are several ways that game designers can make games that help people avoid VR sickness. A common practice is to not allow free movement and instead have people teleport from one location to another (like in the game Trover Saves the Universe).

Another method is to make the floor very indistinct. There are many existing horror games where either the floor is in complete darkness, or the floor cannot be seen at all, and these games are perfect for VR.

The Unorthodox Methods for Stopping Nausea

We all know that VR can cause problems ranging from eye strain, headaches, a lack of balance and nausea, but there are some people who are using unorthodox methods to fix said problems. Specifically, the balance and nausea problems.

People have taken to smoking/taking products from OrganicCBDNugs and it seems to help stop the nausea, and in most games it will stop the balance problems too. Again, as mentioned, it is the game itself that causes the problem rather than the technology itself. As mentioned earlier, our inability to adjust to the setting and teach our brains that the floor in the game is not the floor in real life is what causes the nausea, so some people dull their brain.

If your brain is sufficiently dulled with some form of cannabis, even hemp flowers, then the transitions that occur within the game, such as when you tilt your head, do not register with your brain as quickly and ergo you do not feel as much VR sickness as you normally would.

Why Not Get Drunk?

In addition, people on alcohol may maintain their reaction times, which is great for gaming, but they very quickly lose their decision making skills. In other words, you can still twitch shoot during a game, but you may find yourself twitch shooting at a parked car rather than the in-game enemy.

Still, only a small amount of cannabis is required to offset the feelings of VR sickness. If you have too much, then your mind dulls and you become a very poor gamer. Plus, you start to reach a state whereupon the weed makes you want to stop gaming and do something else like watch the Beavis and Butt-Head.