If you were to base your judgements of the gaming industry on the adverts that are featured on television, your opinion of gamers would be vastly different to the reality. Advertising campaigns by gaming companies tend to focus on the tired, but often enduring stereotype that all gamers are young men or teenagers.

Amongst the laddy internet clips of people playing sports games and the over-the-top masculine portrayals of characters in shoot ‘em ups, there is little to no representation of women.

That’s despite the fact that 52% of global gamers are women. It’s therefore strange to see that the vast majority of games developers are still underrepresenting women, their biggest demographic.

Yet, there are a few sectors within the gaming industry and a selection of titles that have nailed it when it comes to appealing to women and actively including them in their marketing campaigns.

Here are the gaming titles and sectors that are representing women and reaping the benefits.

You may be surprised to see an entry from bingo in this list, but it is perhaps the best example of a game that specifically targeted the female market to grow its popularity. Once upon a time in the 1960s bingo was perhaps one of the biggest games in the world, certainly in the United Kingdom where 14 million people were registered to play.

Forty years on from that high the game was on its knees and looked by all intents and purposes to be descending into obscurity. Then, however, the internet came along and gave bingo new hope, but technology alone wasn’t going to rescue the game.

Teams of savvy bingo marketing experts were amongst the first people to notice the shift towards female gamers. The biggest trend that they noticed was the rising number of women playing games on their phones, mainly through social media.

After spotting that trend, companies designed bingo games to feel and play like mobile games and targeted the majority of their advertising at the female market on social media platforms.

Bingo no deposit, special promotions and even free to play adverts swamped social media and helped attract hundreds of thousands of women to mobile and tablet bingo sites. The result is that the game is finally on the rise again with well over a million players registered to online sites and physical bingo halls even experiencing an upturn in fortune as a result. 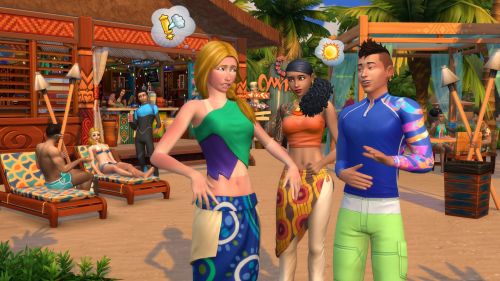 This is less an example of a game specifically appealing to females, rather it is a game that has attracted plenty of female players through being inclusive and fair in its gameplay and advertising.

As the name would suggest, The Sims is a simulation game that allows players to create their own characters and living spaces and live their life. Players can choose their own careers, control their characters romantic life and pretty much everything else you can think of.

What makes The Sims different from other mainstream games is that it is completely equal in terms of representation. The lead character is whoever you choose them to be, whether they be male, female or of any ethnicity.

Most of the advertising for The Sims focuses on the game itself, showing an equal mix of genders and races. By doing this the game has managed to appeal to all demographics without excluding some by appealing to tired old stereotypes.

Released in 2000, The Sims has generated revenues of $4.5 billion making it more profitable than both The Matrix and The Titanic, two of the biggest blockbuster films of the last 50 years.

Recent statistics released by the developer show the split of genders playing to be fairly equal with 50.2% of players being women. How has The Sims managed to be this inclusive to both genders? Simply by representing them equally, as other major titles have refused to do for decades.

Sony Interactive released this game in May 2018 and it quickly became the most popular game ever produced by developers Quantum Dreams, rapidly selling three million copies worldwide.

The adventure game is based on a dystopian future whereby almost everyone in society has their own AI personal assistant. These robots are often used to fulfil menial tasks that humans do not want to and as such are often treated poorly by their human owners.

As the story progresses we follow a host of AI characters as they begin to develop into sentient beings with feelings and emotions. Players can control the decisions and actions of all characters leading to multiple different endings which alter based on your choices.

Detroit: Become Human has been one of the most popular console title games with female players in recent years. There are a number of reasons behinds its popularity with women gamers but yet again, it seems that representation has played a big part.

One of the main characters Kara is female and there seems to be a fairly equal split of genders in the other supporting character roles. Further to that, Detroit: Become Human focuses more on an in-depth story rather than a single objective.

Industry research has shown that female players prefer developed stories and complex games that focus on more than one single strand or objective. Unfortunately, some of the biggest games in the industry like Call of Duty and FIFA are too heavily indebted to one single objective.

Quantum Dreams, the developers of Detroit: Become Human have always been dedicated to complex stories and equal representation. As a result, their games have always done well with the female market, something other development companies could learn from.