True Blood has ended for this season and fans won’t see it again until 2013; probably after the next season of Game of Thrones.  Part of the season ending was quite shocking and part was not.  Like most season finales of this show, based loosely off the books by Charlaine Harris, fans are left wondering just what in the heck will happen to their favorite characters.

While the first season followed the first book fairly closely, the subsequent ones have not.  There have been some major things which the True Blood writers are not ignoring but there are others which are completely made up.  This season was definitely a big one for that.  Bill and Eric caught by the Authority, stuck doing bidding for them and attempting to stay alive.  Russell Edgington alive, well, and still as crazy as ever although moving on from his despair over his dead lover, whom Eric killed a few seasons ago.

One of the biggest surprises were Bud Dearborne turns out to be the leader of a “cult” against vampires and those who would help them live in normal society.  His death shook me to the core because he was a character I always thought of as a nice grandfather in the books.  Again, the show veers from the books so I shouldn’t compare.  I also wonder just how Sam and Luna will escape the compound unscathed with Bill on the loose.  Plus what about poor Andy Bellefleur with four half-fairy baby girls? 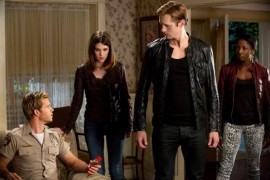 Another shock was Pam turning Tara into a vampire.  When Tara took the shot for Sookie, I thought they were going way off the deep end since Tara hates vampires so much.  However, that might have been the reason to make her one, see how her perspective changed when she had to become the thing she hates the most.  Her and Pam’s relationship has been budding ever since as creator and protégé and the ending with Pam and Tara kissing was definitely unexpected. 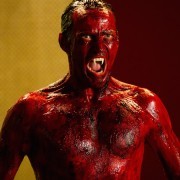 Of course, the two biggest shocks were finding out that Sookie is “owned” by a vampire; the same one who killed her parents; and Bill turning into a zealot, causing him to do something so unBill like that I really wonder how they are going to start next season.  The Authority dead and Bill now an evil “God” who is out for blood against all those who oppose him, Eric and Jessica being the top of that list it seems.

Where season six will take fans is all up in the air right now.  Nothing seems to point in a good direction for Bill, who must be killed I think to save everyone else.  Unfortunately we now have to wait almost a whole year to find out just what Lillith’s blood has done to him and if everyone in the compound will survive.