Andrea is definitely try to prove “I ain’t a Judas” this week on The Walking Dead because she can’t decide who to be loyal too.  The woman who learns the truth about her beloved Governor, he really is a liar and out for blood, just can’t face the idea of leaving him; it makes me want to scream.  I’m getting ahead of myself though. 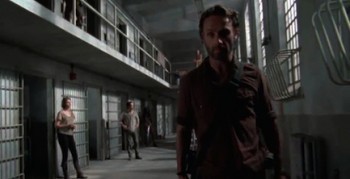 The prison group seems to be at ease with themselves at the moment, still debating if they should stay or go but not as badly as before.  Plus, the group is at least accepting of Merle being there, even if most of them don’t like it and would like to kick him out.  I think saving the life of someone redeems them just a little bit; only a little bit though.  Glenn is the most vocal about disliking Merle although Michonne is just as uncomfortable when he talks to her as she works out.  (Did anyone else catch the Zombieland reference about the cardio?).  It was obvious she was fighting an urge of some kind about him; whether it was to walk away or find a knife to stick in him.  Even Carol isn’t happy to see the man, telling Daryl that she understands he’s his brother but Merle isn’t good for him, even if she is glad he came back.

In Woodbury, the Governor is hellbent on making sure the town can defend themselves, and probably at some point take over the prison and kill everyone in it.  He arms every person he can, including children who are around the age of 13 or older.  Andrea protests this but he won’t listen.  He does tell her that the prison raid was just to check it out but that the group was attacked so they retaliated.  Andrea is skeptical and wants to visit her friends.  The Governor tells her if she goes to not come back.  She questions Dallas about if he knew the Governor was going to the prison but he denies it.  So she asks for his help in leaving since the doors have been sealed shut.  He is reluctant but when the Governor tells him to do it (without Andrea knowing she is being informed upon) he consents.  The help she needs is catching a single walker and him holding it down while she cuts off its arms and breaks its jaw so she can use it to get to the prison without the other walkers attacking her.  Of course, while they are doing this another walker shows up but Tyreese and his group kill it (knew they’d be back).  As Andrea heads off, Dallas takes the group back to Woodbury.  The Governor welcomes them as he did Andrea and Michonne but when he finds out that Rick’s group kicked them out and they are willing to fight with Woodbury against them, he warms up even more and tells them if they decide to stay, they will certainly be welcome to. 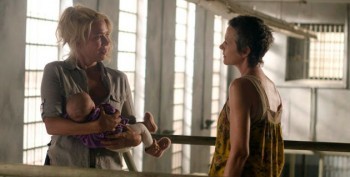 Andrea makes it to the prison unharmed and is let him but treated like a captive at first.  When they find out she is alone, they let her go but won’t let her in the living quarters of the prison.  She finds out what happened to everyone since she left and meets Judith.  When Carol calls her lil’ass kicker, Andrea knows immediately that Daryl named her that.  The group talks and explains that the Governor attacked them unprovoked, unlike what he told her.  While she looks upset she still wants to get the two groups together because, as she vehemently states, “there are innocent people” in Woodbury.  She can’t convince the group to change their mind about going after the Governor.  Carol’s conversation with her leaves all kinds of questions of where Andrea’s loyalties are since Carol tells Andrea she should go back, sleep with the man, and then kill him when he is vulnerable.  Eventually Andrea leaves, with the group giving her a car and a gun.

When she arrives back at Woodbury, they do let her back in.  She sees the Governor telling him that she saw her friends.  He tells her that he knows why she came back; she belongs there, and then kisses her.  Later Andrea is awake as he slumbers.  She gets up and takes the knife she was given, opening it as she walks toward the Governor.  She contemplates killing him but eventually turns away.

Rick isn’t waiting around for another attack.  He plans to get some more supplies and plans to take Michonne.  Daryl, Hershel, and he discuss this as Beth sings for the group.  Rick tells Daryl that while he is glad he came back and will let Merle stay, if Merle does something to hurt the group, it’s on Daryl’s head.

This is where we are; Andrea not knowing how to take out a man she likes but who is also a villain and the prison group finding ways to defend themselves better.  How long before these two groups come to a full showdown?  Will Andrea realize she is being stupid by letting the Governor live?  Is Rick going to step down as was suggested by Hershel and his own son?  Next week we might find out but at this point, I don’t think it will all happen at once.