If you have not seen the season 3 premier of The Walking Dead, stop reading right now; this has all kinds of spoilers.  For those who did watch it, were you shocked and relieved to see the time passage?  I know for me that has been weighing on my mind since the first season when the show seemed to be a day to day or hour to hour thing.

Seeing Lori very pregnant was a shock at first but it was also a nice change.  Skipping the entire winter makes me want to know exactly what happened and how they survived but it not being stated is probably better for believability.  However, I had to think that Rick and Hershel would have longer facial hair and the girls’ long hair in general.  Not that big of a deal though.  I was concerned about not seeing Andrea at first, despite knowing from spoilers at the end of last season she was still going to be in the show.  Although once I saw Michonne, those fears were alleviated.  The group dynamic has definitely changed in this new season.  Everyone is tense and keeps their distance from Rick, and you can see the toll it’s taking on the group.  Of course, part of that could be exhaustion and worry. 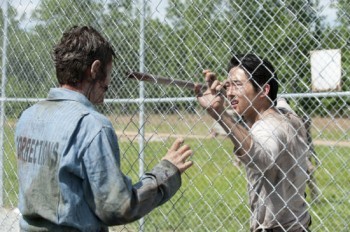 So far this season The Walking Dead is bloodier than previous ones because the re-killing of the walkers is done with more hand-held weapons as guns.  This makes sense as their supply of ammunition would be dwindling.  It gives you a sense of just how bad things have gotten though when you see Carl with a gun, especially when he helps clear the house of zombies before searching for food; no more coddling for this kid.  Even Carol has become more helpful since she now can use a gun and no longer stands in the background while others take out the undead.  Of course, in a situation like that everyone would need to learn to survive or end up dead. 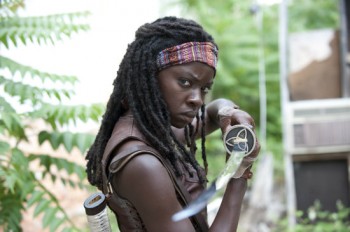 I still want to know why Michonne has two armless, mouthless walkers with her.  What is their significance?  Hopefully it will be revealed at some point but since this season is several months beyond the last one, Andrea would have already asked that question and been given an answer.  Maybe it’s one of those things they are leaving out on purpose so you will read the comics since that’s where Michonne came from.  Plus, will Andrea and Michonne every find the other group or is the storyline split from now on?

The ending of the episode left more questions than it answered and the tension higher than ever before.  Or maybe that’s just because it’s been months since I saw the show and forgot it always makes you tense watching it.  Previews for next week’s episode portray a new enemy for the group, which should make things really interesting this season since the walkers are bad enough.

I can’t wait to see what else this season has in store for The Walking Dead.  What about you?  What are you worried about?  Excited about?  What answers do you want?