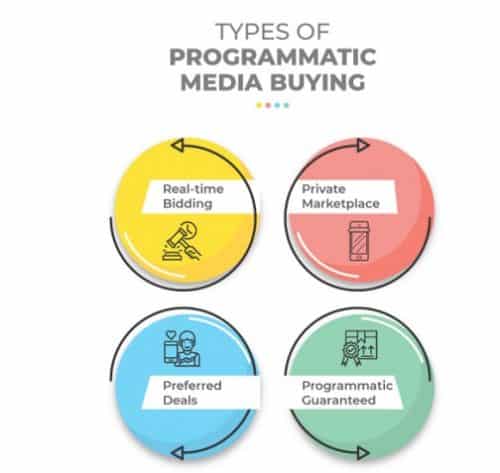 Let’s discuss some types of dealing with programmatic rules to serve ads on the publisher’s website:

Real-time bidding (RTB) is an open auction that has become a popular term in programmatic technology due to its international usage. All the slots of ads are opened to all. And via an open auction, these are sold bidding where the slot is given to the highest bidder.

Setting up and optimizing RTB is very easy. Still, it lacks transparency as the advertiser knows the category of the publisher. But the exact website where their advertisements will display is not known to the advertisers.

PMP functions are similar to RTB, except it is solely available to the advertisers who are only invited. Some selected advertisers are reserved for an ad inventory by the publishers in a closed or private auction. PM’s are accessible to the demand-side platform (DSP) customers as they have their own PMPs.

The benefits that PMPs offer to the publishers are used primarily for the websites. An advertiser using PMP comes to know at which sites their advertisements are displayed. It allows measuring their ads at an accurate return of investment (ROI).

The preferred deal is a feature that allows advertisers to opt for the goods at a fixed cost before being available on PMP in open auctions.

It is also a process of buying immediately, where the agreement made between the advertiser and publisher agreed beforehand with the preferable deals like setting the amount, targeting audience, etc.

Advertisers are also allowed to have a clear view of the publisher’s ad inventory before it is officially available. The advertisers also use Digital Signal Process (DSP) to realize their customers and decide whether or not to buy the ad impressions.

The publishers and advertisers decide to the terms directly and follow the traditional approach of media buying by programmatic guaranteed. It is commonly known as programmatic direct or automated guaranteed.

After the negotiation, all the decided inventories are sold to the advertiser; it doesn’t follow a particular bidding technique. Programmatic guaranteed allows the advertisers to decide the amount; the number of users will visit and restricting the frequency of your display or video appears to the same person. The advertisers exactly know where they would place their advertisements. They are also aware of the heavy advertising budgets only use the automated guaranteed process.