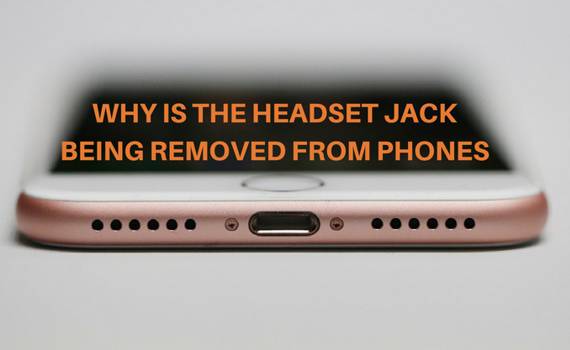 The smartphone revolutionized the way people look at their mobile devices by giving them the option to not only interact with other people but also use it for entertainment purposes whether audio or visual. The headset jack being removed now by various manufacturers was once standard accessory accompanying a smart device and various reasons were either listed by them or guessed by industry watchers. Let’s take a look at a few of them.

Customers not only want a device that is technologically sound and has high quality components but also one that is attractive to look and this reason drove a lot of makers to go for removal of the audio accessory. It was also necessary for providing other innovations developed that needed to be fitted in the chassis and as the space was freed by the jack, these modifications found room and the new phone also turned out to be slimmer. When asked, phone users may not list thickness as a criteria influencing their choice but when they decide to buy one, the look matters to them as much as the technical specifications. A thinner body imparts a natural stylish and classy look to the gadget and buyers find such options more desirable than others.

Apple started the move for the headset jack being removed from its devices and other manufacturers followed suit and the reason the Cupertino based technology giant proffered for it made sense to a lot of experts. The audio accessory was hampering them from adding a lot of other advancements like better camera technology and processors, that they wanted to put into the iPhone and once this big component was removed, it made possible the addition of their desired alterations. It also facilitated the introduction of bigger battery size that meant increased user time for people employing their devices for gaming or watching videos.

Various Original Equipment Manufacturers (OEMs) claimed that the sound quality was compromised due to the limitations of the existing technology and it was high time that they provided a completely digital solution. They also offered whether for free or for additional charges, alternative accessories fabricated for listening purposes. It also motivated companies like iOs app development services to invest resources in creating products aimed at providing enhanced audio experience.

Companies like Google have stated another viable reason that they want to lay a new roadmap for the future and increased screen size with the display moving as close to the edges as possible. The headset jack  being removed helps in designing a productive full- screen display paving the way for fashioning of bezel- less devices giving the user an enhanced digital experience.

Most OEMs started offering alternatives like the USB-C headphones which could be easily connected to the smartphone via the existing port or 3.5 mm headphone adapters which also use the same port for coupling with the device while the older audio accessory plugs into the adapter. A futuristic solution has been provided in the form of completely wireless earbud phones (e.g Apple’s AirPods and Google’s Pixel Buds), which connect through Bluetooth or proprietary systems like the W1 chip in case of iPhones.

The headset jack being removed met with lot of criticism from members of the general public as well as some experts of the field but the phone makers countered it by saying that the technology was outdated with no innovations happening and it was the perfect time to say goodbye to it. The discarding of old methods always meets with some resistance but if the alternatives being offered are better and help in increasing productivity then there should be no hesitation in doing it.