To celebrate the new year we start off with our best and biggest web hosting package giveaway so far.  One lucky blogger, web site owner or startup will win a full 1 year Linux VPS Webhosting package from NQHost.

For those who don’t know, a VPS is a Virtual Private Server which is a set amount of CPU/RAM/Disk Space that is separate off of a physical server (like a VM) that is dedicated to your own website(s).  This isn’t a shared hosting, so you have these resources that are specifically dedicated to your web instance and you can typically run much larger sites with more throughput and faster response times with a VPS hosted site than with a shared hosted site. 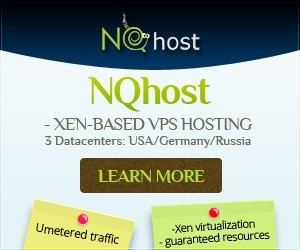 With the NQHost VPS Giveaway you are getting the following:

Do you want your web server hosted in a U.S. Datacenter or one in Germany or Moscow?  You choose which datacenter you want your VPS hosted in based on the major geographic location of your target audience.

30GB of Storage Space on the VPS instance which should be plenty for more than 1 weblog.

This should be enough for a few smaller blog sites that aren’t PHP plugin heavy, you also get burst support if occasional bursts are needed.

There is no bandwidth cap, your site has unlimited bandwidth.

You choose what operating system you want to run, CentOS, Debian, Ubuntu, Gentoo, Debian, Fedora…etc.  Whichever flavor of Linux you are most familiar with you get to install and configure.  CentOS is the default.

ISPManager Lite is an included Free Control Panel Option, if you want CPanel which I recommend you will have to pay for this separately at $15 per month if you win the web hosting.  This is because CPanel has specific license costs and they are just passing the license cost to you the consumer.  CPanel isn’t essential but recommended due to the ease of which you can administrate your web instances and server.

Influencer / Reviewers / Live Streamers - Get in Touch https://t.co/DwhaTltp6U
Protect your eyes with the Baseus Monitor Light Bar https://t.co/0QQHZ2EefP - 21 hours ago