“Kara.” The mural speaks of her name. It warns of a treacherous path that lies ahead in her heroic voyage through ancient lands and the seas that surround them; fulfilling a destiny that is shrouded in a long-forgotten history with its remnants scattered like whispers throughout the lands.

She must fight through The Forbidden Islands and face its storm to return to her tribe, but it will take time and perseverance to understand its true nature, as unexpected dangers test her resolve and will to survive.

Players who pre-order the game on Microsoft Store, Steam Store or Epic Games Store will receive Kara’s Ancestral Gear bonus items at launch. If players pre-order on Nintendo Switch or purchase the game within two weeks of launch, they will be entitled to redeem Kara’s Ancestral Gear DLC via the Nintendo eShop until September 10. For Japan, Korea and Hong Kong customers, the bonus items will be available to download a week after launch on September 2 until September 15 at no extra cost.

For PlayStation Store and Stadia, players will not be able to pre-order, but will receive Kara’s Ancestral Gear bonus items if they purchase the game within the first two weeks of launch until September 10.

To Kara’s tribe, the exploits of her ancestors are legendary. Hunters, fishers, warriors, poets and philosophers, their stories tell of a people who lived in perfect harmony with the natural world and swam the deep waters in the company of gods. Though the tale of their downfall has been lost to time, their legacy lives on in these artifacts that have endured to this day. 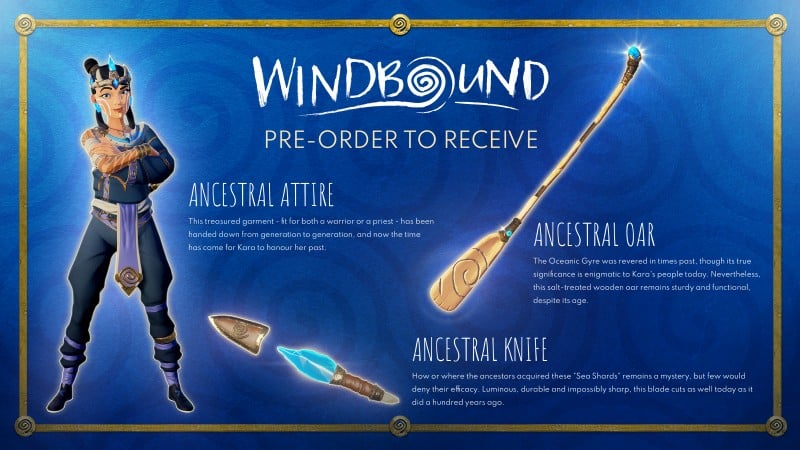 This treasured garment – fit for either a warrior or a priest – has been handed down from generation to generation, and now the time has come for Kara to honor her past.

The Oceanic Gyre was revered in times past, though its true significance is enigmatic to Kara’s people today. Nevertheless, this salt-treated wooded oar remains sturdy and functional, despite its age.

How or where the ancestors acquired these Sea Shards remains a mystery, but few would deny their efficacy. Luminous, durable and impossibly sharp, this blade cuts as well today as it did a hundred years ago.

The Forbidden Islands are Calling, Unlock their Secrets

Shipwrecked alone on an uncharted island, explore, adapt and navigate the land and perilous seas to stay alive.

As Kara, you are a warrior, caught at sea in a fierce storm, adrift from your tribe. Thrown from your boat, at the mercy of the turbulent waters, you are tossed onto the shores of the Forbidden Islands, a mysterious paradise.

With no boat, food or tools, just the will and skill to survive, uncover this beautiful island’s rich resources. Craft tools and weapons to hunt and defend yourself against nature itself with its wild and fantastical creatures.

Whilst exploring further islands and the scattered ruins across their lands, secrets of the past and glimpses of the future are revealed. Unravel the mystery behind them all and you may find more than just your way home.

Uncover the Secrets Within

Embark on a personal journey and discover the history of the idyllic Forbidden Islands; each holding the key to a mystery and unexpected revelations.

Explore As Far As The Eye Can See

Head towards the horizon, advancing across the islands, each with their own diverse wildlife, landscapes and challenges to face.

Live Off The Land

Scavenge the islands’ untamed terrain for resources that you can use to craft a full range of tools and weapons to hunt wildlife and upgrade your boat. You must set sail when resources become scarce.

Your boat is your key companion on this journey, carefully craft your own custom sailing vessel to take on the treacherous waters, traversing from one island to the next. Design your boat to battle tempestuous winds, monstrous waves, and deadly sea creatures.

Windbound is out on August 28 on PlayStation 4, Xbox One, Nintendo Switch, Google Stadia and PC.

For more information about Windbound, keep up with the game on Twitter: twitter.com/WindboundGame

Koch Media is a leading producer and distributor of digital entertainment products (software, games and films). The company’s own publishing activities, marketing and distribution extend throughout Europe and the USA. The Koch Media group has more than 20 years of experience in the digital media business, and has risen to become the number one distributor in Europe. It has also formed strategic alliances with numerous games and software publishers: Bethesda, Capcom, Kaspersky Labs, NC SOFT, Sega, Square Enix and Tecmo-Koei, etc. in various European countries. With Headquarters in Höfen, Austria Koch Media owns branches in Germany, England, France, Austria, Switzerland, Italy, Spain, the Nordic regions, Benelux, Australia, Czech Republic and the United States.

5 Lives Studios is a team of five industry veterans who banded together in the wake of the Australian games industry’s collapse. Having worked together in various studios for almost a decade, they decided to set out on their own independent venture to create the games they’ve always wanted to make. Between them, they’ve worked on a wide variety of genres and properties, including Syndicate, Grand Theft Auto, Darksiders, Star Wars, and more. Its first title, Satellite Reign, was developed after more than 15,000 people backed a Kickstarter campaign in 2013.