Very soon the latest incarnation of the world’s most popular operating system will hit. Windows 8 is unlike any of the other operating systems before it, the whole interface has gone through a number of changes as well as inclusion of a variety of new features. One of the most exciting features that have currently been announced is ‘Windows to Go’. This brand new feature will allow you to have Windows 8 no matter what computer you use.

Windows to Go will only be included in the business version of the Windows 8 Operating System. It will enable you to boot from any USB Device that has enough space to hold Windows 8. This includes larger capacity USB drives as well as external hard drives. The system is compatible with both USB 2.0 and USB 3.0 as well as both BIOS and UEFI hardware. Despite the slower speed of USB 2.0 there have currently been no reports of latency issues whilst using this type of hardware. 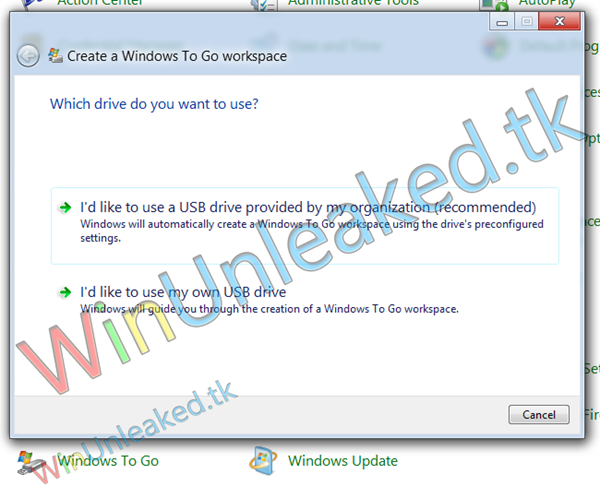 Windows to Go was first included in build 7850 of Windows 8. The boot system is created through the ‘Portable Workspace Creator’ in the system. It wasn’t until September 2011 when the system was actually announced at the build conference.

The deployment of Windows 8 is fairly simple; all that needs to occur is creation of the disk within the original version of Windows 8. It can then be plugged into any computer system where it will automatically deploy and install all the relevant hardware. No reboot will be required. The installation process only needs to be completed once, and in the future all boots when the Windows 8 Live USB is plugged in will result in Windows 8 booting automatically.

Of course major problems with any USB system will be that from time to time you may accidently disconnect the piece of hardware. Luckily the Windows to Go system has built in safety features which will minimize the risk of running Windows 8 on a Live USB. On the removal of the USB Drive the computer will lock up automatically. You will have around 60 seconds to re-insert the drive, on reinsertion the system will begin running again automatically. If you fail to reinsert the drive within 60 seconds the entire system will shut down to prevent any data that may be sensitive being displayed on the screen or saved within the computer’s RAM. This system also prevents any data loss from occurring which would normally be the case if you removed a USB device whilst it was being worked on.

You can see the obvious benefits that the Windows to Go system will provide a business user. The ability to transfer your data and allow you to work on any computer is very handy. The full benefits of this system will truly be realized when used in combination with the inbuilt Live ID integration where your files will be backed up to the cloud.

Windows to Go is one of the best features of the upcoming Windows 8 Operating System. Currently no licensing details have been announced with regards to how this can be used, but expect them to be within due course.