Now this feature existed in Windows 7 too but was still a nice feature that they left intact in Windows 8 where you have the ability to mass rename files of the same type and have Windows just default with an increment (#) after the filename.

To mass rename files in Windows 8 that are grouped together like photos or documents that should all be the same title with just an increment, all you need to do is select all files that you want to rename together.

Then right click and click rename on any one of the selected files, or you can simply hit F2 and it will pick one file and rename it and all of them. 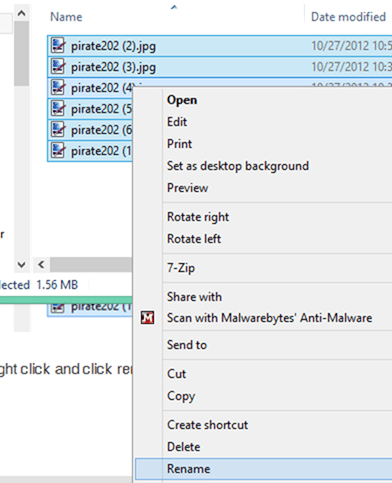 Simply type in the new filename (in my case I changed pirate202 to pirate101) and then hit enter. 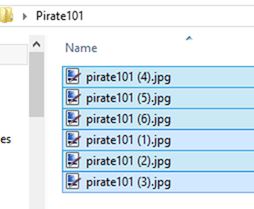 Now all files are renamed and the incremental number appears in parenthesis after the file name that you specified.  This makes it easy to mass rename a bunch of game screenshots where they all just have a date range without game title in the name, though it would be cool if there was a way to have settings to put datestamp instead of (#) as part of the name by default the rename will more than suffice for most people who don’t want to install a separate freeware program with more mass rename flexibility.

So if you were looking for a quick way to simply mass rename files in Windows 8 then now you know you can simply use CNTR or select a group of files, hit F2 and just rename an entire group of files at the same time.