I have used various video converters over the years, and the Wondershare UniConverter which is essentially the same as the former iSkysoft Video Convert is by far the best and most versatile video converter software out on the market. I already have been a huge Wondershare fan for a while and use their Filmora Video editor every single day but sometimes I have need for a converter instead of a video editor or first.

With WonderShare UniConverter I can take virtually any input file and convert it to the resolution and output file type that I need. Most often I would convert .MOV files to .MP4 but in some cases I may even just strip out audio from MP4 files or video files for listening or grabbing sound bites. 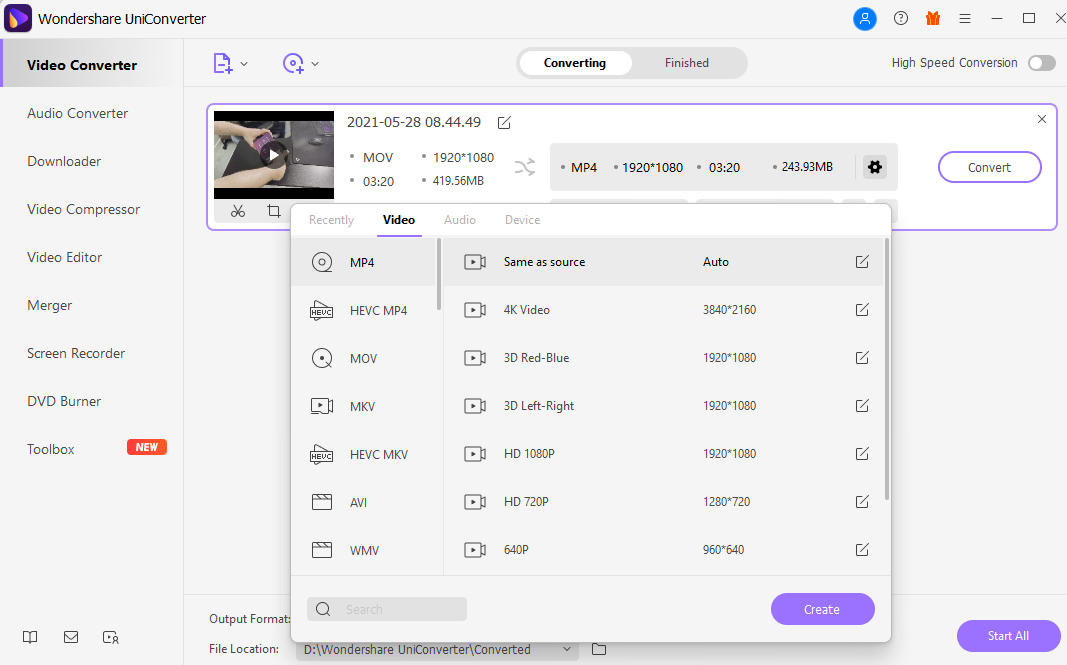 Their software even has a high speed conversion mode that you can enable to greatly improve the processing time but it is compatible to less formats overall, but if you work specifically with the input formats listed in the below image and want to output to those formats, then this is a good option. 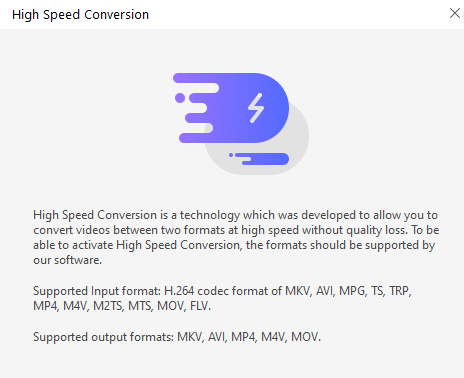 For my usage example I did a 3:20 minute long 1080p .MOV file and converted to an .MP4 which took only about 50 seconds and more it shrunk the file size itself down from 419MB to 244MB in file size.

The fact that UniConverter by Wondershare has a trim/edit capability right into the convert which pops up a window where you can trim your timeline with preview is a very nice touch.

UniConverter has you covered there as well, with the Video Compressor function of Wondershare UniConverter you can literally have control over the bit rate and compression to control your output file size even without scaling down the resolution, so you decide if you want to try and shrink that 1080p file without having to downscale it to 720p. 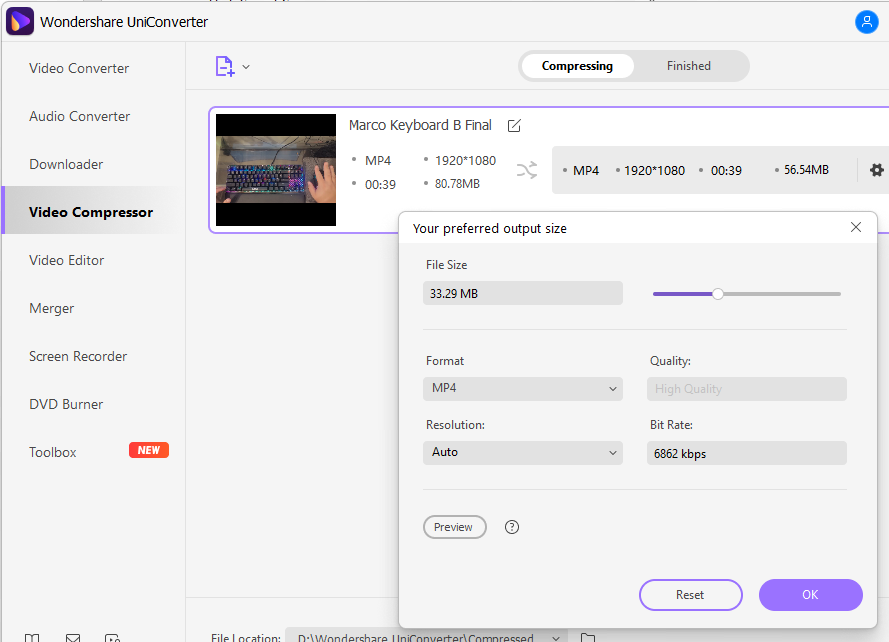 The fine grained control you have over the bitrate is impressive, most programs have you select rounding to the nearest thousand, but you can get pretty precise here.

You even get more video editor like controls built in with the Video Editor sidebar menu. You get to add a watermark, trim, crop, add effects, subtitles and even dub audio on top of a video.

You can even stich and merge multiple vids in a series together with the Merger sidebar option. UniConverter also doubles as a screen recorder on top of it all. You can do screen record, webcam record or audio record, so by far this makes this utility more valuable than your typical “video converter software” 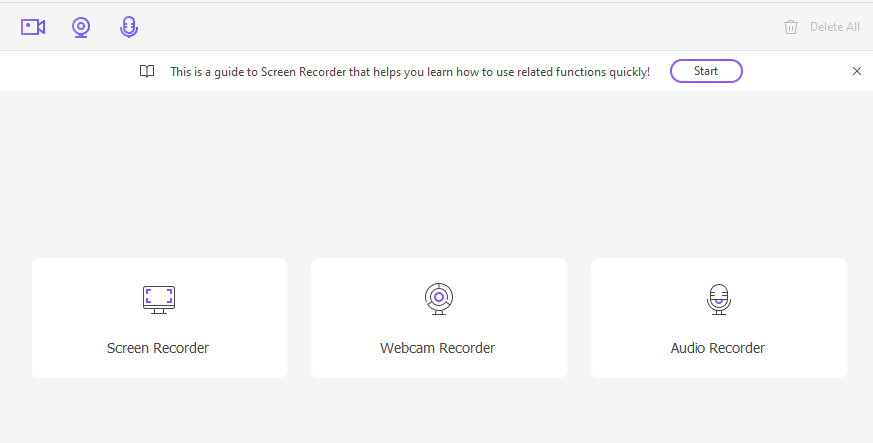 The Audio Converter has more features than you would think as well, as they say converter, but if you click the options menu, you can see you can not only adjust the volume, but you can use voice enhancement, mix the stereo track, or even attempt background noise removal on an audio file. It doesn’t let you get as fine grained as say Audacity, but the audio fix defaults may be just what you need to clean up the audio a bit, plus you can use it to convert any m4a to mp3 or wav to mp3 or whatever audio formats you need. 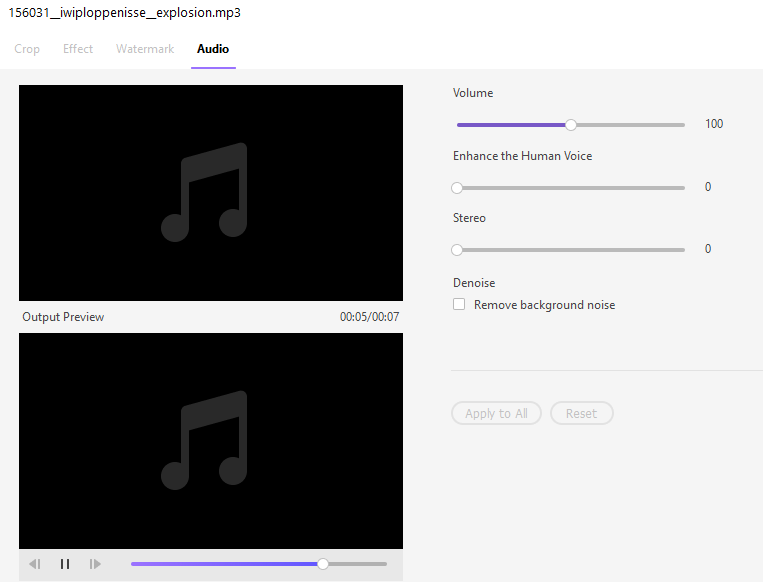 They could have stopped there, but WonderShare wasn’t finished with what they could stuff into UniConverter, so not only do you have the ability to burn DVD’s (does anyone do that anymore?) you can also use UniConverter to backup your online media libraries like a YouTube Playlist. I have thousands of videos on my YouTube channel and having backups of them is essential if I ever lost my channel, this allows you to keep a backup and download the more compressed YT file versions in any resolution you want to backup and archive your vids in.

Finally in the Toolbox Sidebar tab of the Wondershare UniConverter you get a bevy of additional features including the very powerful GIF maker which is ideal for making those Facebook or animated GIF’s from snapshots or video that you can share and they are animated in posts. GIF’s are especially valuable for Discord, Facebook and other social media that can play a GIF inside a post, because if a picture is worth 1000 words, then a GIF is worth 100 pictures.

You also get image converter functionality as well, and can fix the metadata on media content which is a nice feature. For those who need to archive and backup their CD’s from a bygone era, you can even RIP your CD’s to audio media and burn custom CD’s.

Again, as I work with many content creators here at DragonBlogger and people send me content in variety of video formats, I make a lot of use of UniConverter, I am always mixing up content for various platforms, from Tiktok vids, Facebook Gifs, Instagram Stories and more, and UniConverter is a fantastic tool in my arsenal of video and audio editing and manipulation. 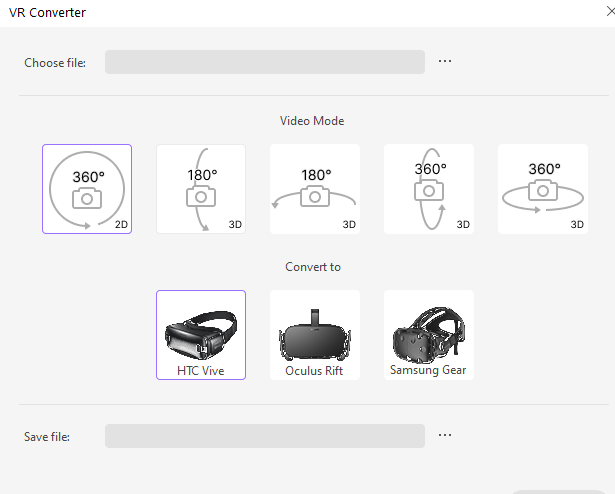 Finally they have a VR converter, which was the only feature I haven’t used but am very curious about, I don’t have a VR headset but it looks like you can chose how to take your 2D Video and render it to be 3D capable with the HTC Vive, Oculus Rift or Samsung Gear. Curious why Oculus Quest 2 isn’t an option but assume it would be same as Oculus Rift in the setting.

Pick up WonderShare UniConverter today, they have an annual plan as well as a perpetual license and this software has  enough features to be worth paying for in my opinion.