Many of us are concerned by the amount of time we spend looking at technology, but are either too lazy or ambivalent to do anything about it. Consider this: you might have your TV playing the news in the background, while working on your laptop and checking your smartphone for messages and notifications… Doesn’t that seem like too much at once? For some, this is no drama and perfectly normal in 2018, but for Scott Blew, Ivan Cash, and millions of others, it was time to at least change one thing about our tech-mad world. These entrepreneurs have teamed up to create a pair of sunglasses which can block media emitted from TV screens.

Take a Break From The Screen World 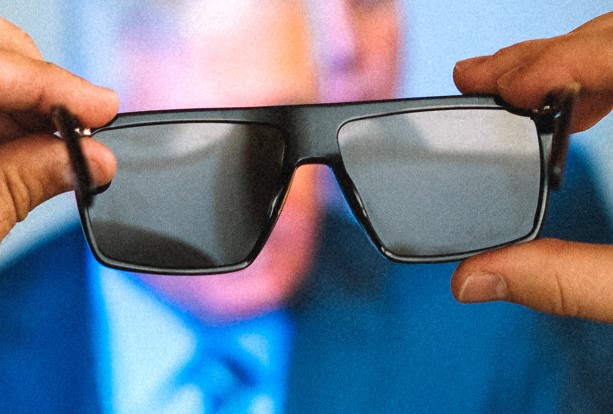 As of right now, the IRL (In Real Life) glasses are looking for funding on Kickstarter. The glasses, which actually work as regular UV-blocking sunglasses too, use a special type of film to cover the lenses and prevent any media on LCD and LED screens from reaching our eyes. Of course, you’ll still hear audio and the glasses don’t yet work for certain smartphones, most laptops, and digital billboards (OLED screens), but it’s still a great start for anyone who’s tired of seeing dozens of screens everywhere they go in a big city.

The IRL glasses only come in one model – a real 80s retro design which was apparently inspired by the cult 1988 movie, They Live (about a man who discovers magic glasses which reveal that aliens are controlling humans via the media). We’re still not sure what demographic this product is aimed at or if TV screens are really annoying enough to need to be blocked out, but much like the Snapchat Spectacles and Google Glass, it’s a fun experiment nevertheless.

Is Tech Use Damaging Our Sight?

These IRL glasses come at a time when looking at your computer for too long is a real issue for our eyes. Special glasses to filter out blue light are a dime a dozen these days, with Felix Gray and Gunnar being two of the most popular brands right now. Some argue that blue light-filtering glasses are unnecessary during the day and that regular breaks from the screen and eye drops should suiffice, but the glasses are in fact very helpful if we look at TVs, laptops and phones at night. This is when blue light can affect the production of melatonin, which is a hormone that controls the body’s sleep patterns. That said, many who work at computes all day still prefer to use good old fashioned prescription glasses and to complete the 20-20-20 rule(look at something 20 meters away for 20 seconds every 20 minutes.

Watch how the IRL glasses work here and an interview with the creators:

This isn’t the first project that Ivan Cash has worked on that has attempted to reduce our devotion to technology, as he also ran ventures to turn emails into handwritten letters and also set up “No Tech Zone” signs across San Francisco. “We’re seeing such a shift in our habits as humans, and I think it’s really worth taking a step back and not just unthinkingly embracing the digital world, but questioning it,”Cash explained on Fastcompany.com.”My hope is that as the Facebooks and Googles of the world continue to grow, that there’s some checks and balances that grow with them. It might not be as lucrative. But I think that from like a sanity and health wellness perspective, it’s pretty crucial.”