Hello! I’ve been a contributor for Dragonbloggers for a decent amount of time, and a fan of World of Warcraft for far longer, and I’d like to take a little bit of your time to talk about the pros, cons, and my own general thoughts on Blizzard-Activision’s choice to purposefully limit the speed of postings on WoWs auction house in an attempt to stabilize the economy and slow down the use of third party programs from allowing others to gain an edge on those that don’t use such technology. Let us start by taking all this into context for the layman reading this article. World of Warcraft economy is player-driven, meaning players go out, farm items, then bring them in and determine the average price on them. 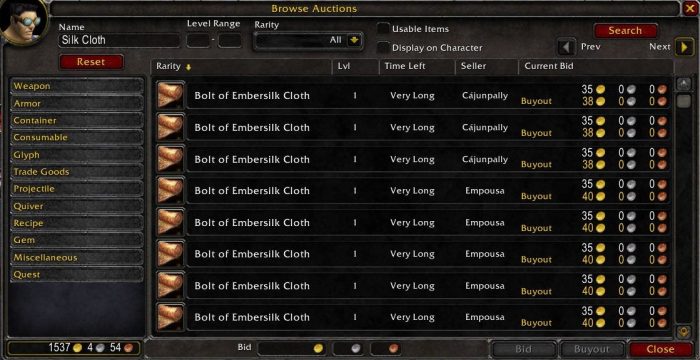 This isn’t a bad system by any stretch but obviously, it becomes incredibly competitive driving other people to lengths to get an edge up, whether it’s using researching the fastest farming spots, learning builds designed to farm things faster at the cost of less single target effectiveness, or in far worse cases, botting. In that last instance, gold farmers will mass farm items via bot accounts, post them at en-masse driving the prices of valuable items into the ground, and generally ruin the game for everyone else. Rather than target botting gold sellers directly and put more funding into stomping out an incredibly diverse culture of toxic, horrid people who will stop at nothing to make a quick buck at the cost of they’ve made a unique choice that can inhibit even a master farmer. Posting items too quickly results in an entire slowdown for the auction house on the players’ end. “Now Opal, this doesn’t sound like a bad idea. What’s the problem?” you’re asking yourself and me, I can hear it now. It’s Blizzard we’re talking about, they make choices off the tops of their heads but overdo or underdo it to the point that you lose massive chunks of the player base, and things turn into chaos. The pros of this system do outweigh the negative consequences though, and here’s my opinion on the matter.

Gold farmers and a competitive economy ruin the game for others by causing players to become far too reliant on the said auction house for materials, and even necessary things they could grind for. This goes deeper, with players purchasing level boosts simply to skip large sections of the game and missing out on the experience. Companies monetizing things that allow people to simply skip content ruins the game both for other players and for themselves. You lose out of the feeling of accomplishment you get from grinding to level sixty in WoW, completing a match in halo, etc. This dampens the mood, and furthermore, depopulates the game world, with players instantly skipping to main hubs as opposed to actually exploring. So while Blizzard did intact this change quickly, it’s a positive one. It might not hold up to the spirit of how the burning crusade felt, but do you really want someone pushing you off a spot just because they want to make a few dollars selling the gold from the items they get there? Frankly, I, as a WoW player do not. It drives items that I’ve worked hard to acquire into the ground and makes me feel as if the game just isn’t worth it even though it very much is.

While Blizzard’s quality is declining as a company since they merged with Activision, I have faith that many developers and designers are still passionate about games, and willing to put in the time to see that they’re an excellent experience for all. Lets just hope my faith is well rewarded.