I have many android devices and it seems there is always one or two needing to be charged sometimes at the same time. I first purchased a powered USB hub which was good for multiple devices connected to the PC at the same time, but not so much for charging. Yes, it charges, but at so slow a rate that it really was not practical. Then I got one that had 3 slots for the car. Nice but only useful when I am in the car. (You do not want to keep any device that used a battery plugged in inside a car that can get very hot or even when it is not plugged in as this can cause the battery to explode). I then moved up to another 6 slot charger that works nicely, and finally I am trying out one from a company named Zilu. 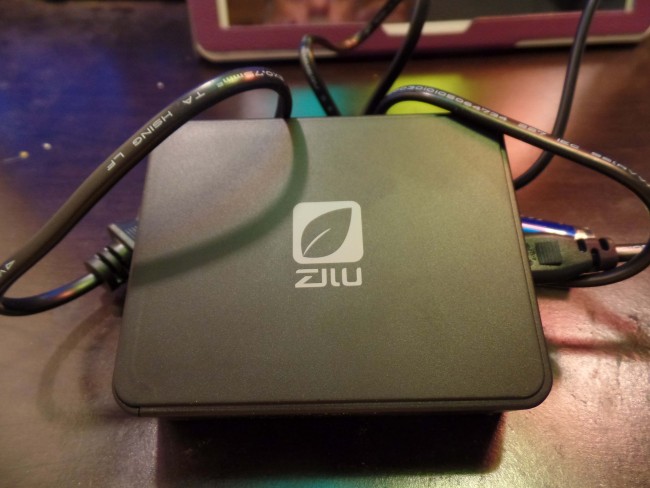 Zilu makes a fairly compact 6 port USB charger that can fit into the palm of your hand. It is light weight and plugs into a standard wall outlet. The specs on Amazon say it can operate with anything from 100v in up to 240v. I have never uses anything other than 120 myself so it is nice to see that it can handle voltages other than what I am accustomed to.

Here is my video review

On the amazon site the specs say it has 3 ports that are rated for 2.1A outputs, 1 at 1.3, and 2 at 1A. The included documentation says 2 at 1A, 1 at 2.1A, 1 at 1.3A, and 2 at .6A. I am not sure why there is such a big difference in information between the two sources of information. I attempted to measure the mA output from the charger through my tablet but the readings I got with the app I was using showed that I was getting about 1.3 amps from a port rated for 2.1A. Well, even on the other chargers the same app showed only 1.4A, so it was not too much difference. 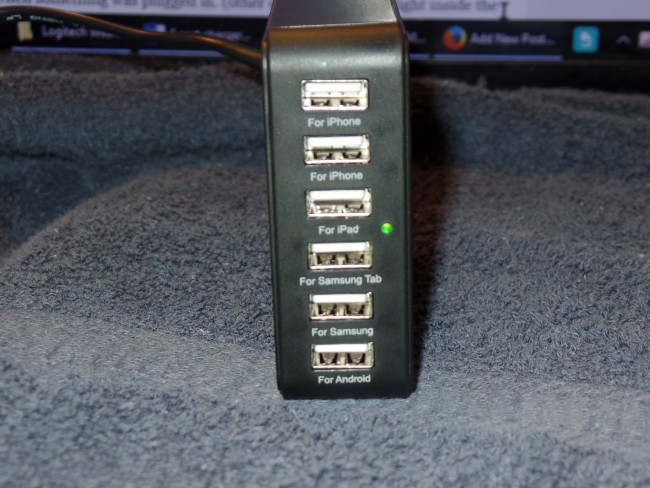 I did try another program that apparently reads thins a bit differently and got readings that varied from 1.3A, to briefly 2.5A while the other chargers I have used varied from 2.3A up to 3.6A. Bottom line is, I did not receive enough consistent information on my android tablet to accurately measure the output of this charger to determine if it was producing as stated.
Having said all of that, It is not a bad looking charger. I love the slimmer design of this one over some of the more bulky ones I have tried out. And while I am not sure which other two ports are supposed to have enough output for a tablet, I do know that at least one does, and with a little time and attention I will discover the others.
On the front face, where the USB ports are is a fairly bright single blue light that easily lets me know the charger has power. I like how it was still visible even when something was plugged in. (other chargers have the light inside the port which then is invisible when something is plugged in). This added feature is in my mind very helpful. The power cord is a good 3 feet long which is perfect for my desk. It allows me some choice in where I can plug it is and still make decent use of it.
Over all, this is as good a charger as I have seen. It could be better. With low cost technology that is readily available, that allows chargers to detect the charging needs of the device plugged in and adapt to them, allowing all ports to be used for any device plugged it, It would have made this one top notch in my books. Being restricted to only 1 or 2 ports is not something I personally like. But then, I do not use cell phones much so I have more tablets needing charged than anything else. For example in my house, my wife has two tablets, I have one, and my oldest son has one. My granddaughter will have one soon, and when my oldest daughter visits, she has an android tablet as well as an iPad. I also have 1 T-100 laptop that uses a micro USB charging cable. Contrast that with me only having 1 cell that I use for testing only and an iPod touch which seems to stay charged forever, and it is clear I charge tablets more often than anything else.
If you’re in need of a device for just a tablet, this will take care of your needs. If you have more devices that you need to hook up that do not require a high Amp port, then this device is definitely for you. Either way, this charger from Zilu will take care of your needs nicely.

Disclaimer:  Zilu provided me with the 6 port charger so I can do a thorough and accurate review, all opinions are 100% mine and mine alone.