Are you fond of trivia and random facts? Do you love science? Well, you’re in for a treat right now because we’ll be talking about one of the fascinating features of our Universe: black holes.

Black holes are regions of spacetime wherein matter is packed so densely, and the gravitational force is extremely strong that nothing – not even light – can escape from it. Physicists believe that the formation of black holes is caused by the corpse of a massive star collapsing in upon itself.  Due to their incredibly dense centers, they can bend the fabric of spacetime.

If you want to increase your fascination with black holes, here are some facts that will surely blow your mind.

A Black Hole Can Stretch Anything into A Spaghetti-Like Strand

Under incredible gravitational pull, any object inching closer to the singularity or the center of a black hole can be stretched out like spaghetti. If you’re standing right now, you notice that your feet are closely attracted to the ground due to Earth’s gravity. In a black hole where extreme tidal forces exist, the attraction is very different.

A singularity can have a stronger impact on one end of your body, which is nearer the center of the black hole than the other, which is away from it. This phenomenon causes your body to be stretched into long thin shapes.

According to Stephen Hawking, black holes are not devoid of light, as previously thought. A black hole has a glow of light caused by some radiation, which consists of neutrinos, photons, and other bigger particles.

The radiation is emitted by the formation and annihilation of particle-antiparticle pairs across vast areas of space. Once a pair nears the event horizon (the boundary around a black hole), one of the particles gets pulled in, while the other is discharged as radiation.

The particle that gets expelled produces energy, which is ten times the amount of nuclear fusion. The release of energy is also the reason why black holes evaporate until there’s nothing left of it. Given our current technology, it’s still far from possible to harness the energy generated from a black hole. 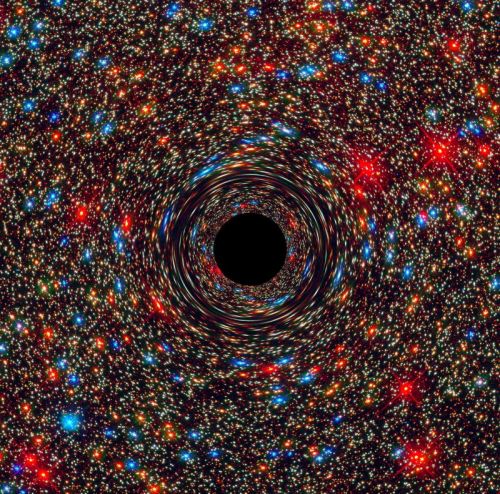 Black Holes Slow Down the Flow of Time

According to the theory of general relativity, massive objects distort time. It’s even true of Earth, which has a weak gravitational force. However, the effect of this warping of time is only negligible compared to what a massive gravitational body, such as a black hole, can do.

Astrophysicists have discovered a weakened black hole helping a galaxy in the Phoenix Cluster to give birth to new stars at a rapid rate. What’s impressive is that it even controls the number of stars born in this galaxy.

The cause of this phenomenon is that the energy output from the black hole is too weak to heat its surroundings. This cools down the galaxy containing it, which results in the birth of new stars.

Black holes are indeed a fascinating feature of the Universe. Learning more about them holds us as if we are in a spell. But instead of stopping at what we already know, it leads us to seek more about the Universe we’re living in.