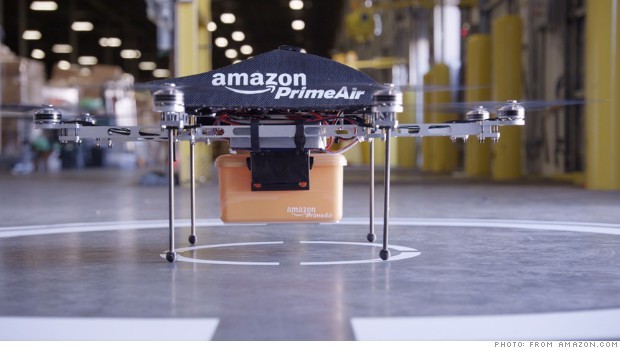 I was watching 60 Minutes on CBS earlier today and I was intrigued when Amazon CEO Jeff Bezos was giving a tour of how Amazon’s distribution facilities work. As it turns out, the process is semi-automated with intense algorithms that help Amazon’s employees package up products in a matter of seconds. However, the really exciting part was when Bezos opened up a door to reveal a couple of Amazon Prime Air octocopter drones. These drones, as it turns out, could possibly be the future of Amazon’s delivery infrastructure. They are all autonomous vehicles powered by GPS that can fly packages from an Amazon warehouse to a customer’s front door within 30 minutes. Granted, they only have a 10-mile range, but that is perfect for cities like New York City and Atlanta where customers can receive a package via drone in less time than it would take them to drive to Walmart.

This is a very interesting concept that Amazon is starting to pursue. I always said that Amazon should open up big-box retail stores to compete with Walmart and Target, but this is a much more appealing idea. I hate going to Walmart because I have to drive there (which takes 5-7 minutes), find the product I want to buy, wait in line (which takes another 3-7 minutes), and then drive home (another 5-7 minutes). By the end of my Walmart trip, it takes me at least 30 minutes just to buy something like toothpaste. With the Amazon Prime Air concept, it would take 3 minutes (or even less) of my time to order the toothpaste on Amazon, then within 30 minutes the octocopter drone would fly it from the warehouse right to my front door. It may still take 30 minutes, but going to Walmart actively consumes 30 minutes of my time whereas the Amazon concept only takes about 3 minutes of my time to actually order it.

In the 60 Minutes interview, Bezos admitted that although he’s optimistic, we probably won’t be seeing this concept before 2015. Amazon still has to convince the Federal Aviation Administration that it is safe for these drones to be flying around and they also have to overcome some technical hurdles. Even though the drones can navigate to a customer’s house via GPS, that only gets them in the general vicinity of their house. The GPS coordinates allow the drone to know that it’s near 1234 Example Road, but it doesn’t know exactly where the customer’s front door is. It could drop the package on the driveway, in the yard, in the pool, on the roof, or somewhere else. From a technical standpoint, the easiest way to fix this is to sell (or give away, as Amazon doesn’t profit by selling hardware) a password-encrypted GPS receiver that the customer can place in front of their front door. This would allow the drone to navigate directly to the receiver and drop the package exactly where the customer specified. And because the receiver would be password-protected and encrypted with customer information, it would be unique for each person to prevent Customer A’s package from landing on their neighbor’s drone landing pad. But Amazon being Amazon, they want it to be absolutely simple for the customer. Customers should be able to order a product at work and have the drone deliver it seamlessly without them having to place a landing pad anywhere. How Amazon will tackle this major complication, I have no idea.

In addition, I can see theft being a common problem with this new Amazon Prime Air concept. For example, if a thief sees one of the Amazon drones flying in a neighborhood, all they have to do is follow it until it lands and drops off the package (remember they only have a 10-mile range, so they won’t have to follow it far). Once the drone has flown away, the thief grabs the package and walks off. Neither Amazon nor the customer would have any idea what happened to the package and the thief would get away with the perfect crime. Granted, thieves can steal Amazon packages after the UPS employee drops them off as well, but it’s much easier to spot a flying drone than it is to spot a brown UPS truck.

Overall, this looks like an amazing service. Like Amazon’s Sunday delivery options, it will only be available in large cities that are located near Amazon distribution centers, but hopefully after the technology has been improved and perfected, they will have a farther range than 10 miles. There are some legitimate safety concerns (Amazon doesn’t want these falling on anyone) and there are some technical problems, but once those two issues are addressed, I feel like this service could make postal companies that travel by truck obsolete. Bezos did say, however, that the drones can only carry small to medium-sized items, so don’t expect to see these things carrying a kayak around. But things like books, toiletries, and other small products would ship just fine via Amazon’s Prime Air service.