In the past 60 days I have had 4 condenser microphones from 4 brands come across my desk for review and I got a chance to do some recordings, voice overs, and came to very clear conclusions on each.  I will preface by saying that I am only comparing these 3 microphones which are in the $50 or less price range, and one is slightly more but has a clippable coupon to bring it under $50 so it just falls in this category.  There is on clear winner in this category for me, and the rest are runner ups, one was clearly weaker than the others for me though has the  potential to be better if you spent more money. 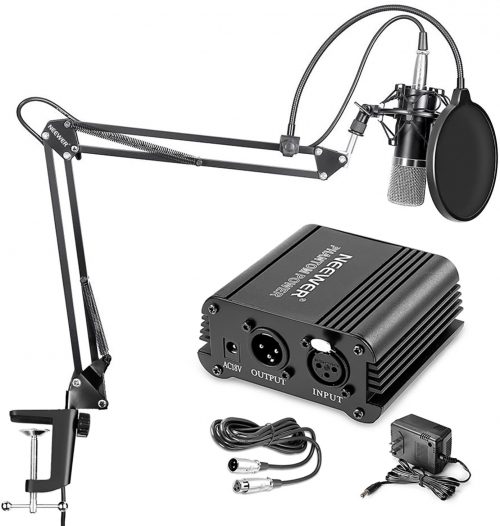 First up is the Neewer NW-700 Condenser Mic kit which comes with a boom arm, pop filter, wind screen, shock mount and 48V Phantom Power.  It is the only XLR microphone in this round up and for under $50 to include the 48V Phantom Power I had the highest hopes and expectations for this mic kit and would have figured it would have been the best of the bunch but it turns out I was wrong.  The mic itself seemed to have very little default gain and volume, with Windows sound manager maxing out my mic volume level to 100, I thought maybe the Phantom Power was defective so wound up buying another Behringer Phantom Power on a recommendation only to find out it didn’t make things much better.  I used various XLR to 3.5mm and XLR to USB cables, only to learn that to really leverage this mic you need to get a pre-amp and a mixer, which would put the cost well over $100 so this mic as it stands by itself even with the Phantom Power just simply didn’t have enough input volume for me to rate it very well.

Here was comparison of the Logitech G Pro X headset to the Neewer Condenser Mic for a sound comparison.

Now that being said many people say the Neewer mic is excellent but you just need a mixer / pre-amp to get the gain boost from it, so I won’t say it isn’t an option, but it isn’t a plug N play USB type of option which is what I was expecting from a sub $50 condenser microphone. 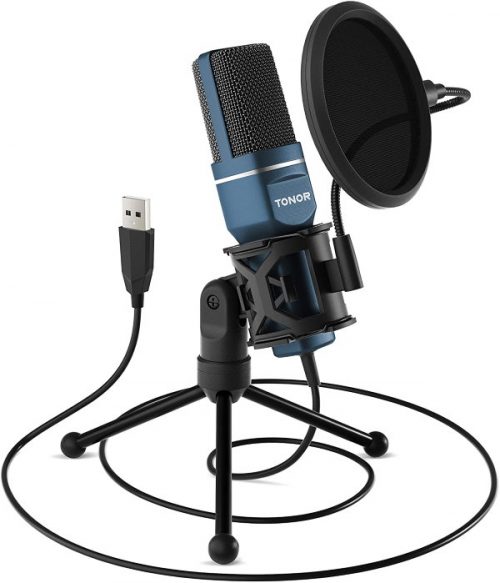 The TONOR TC-777 is a solid price point for a desktop condenser mic and at under $40 it is the least expensive mic in the roundup.  This mic comes with a mini-tripod and a pop filter, but no wind sock and no other frills or features.  Its Cardioid pick up is for front and center, and it mostly does a decent job.  This mic sounded much better out of the box than the Neewer XLR mic even with the Phantom Power of the other mic.  A few things I found annoying with this mic was the tripod was a tad light and had a tedency to be knocked over fairly easily, it isn’t nearly as heavy or solid as the FIFINE mic tripod featured below.  It also only includes a pop filter but I found the gooseneck on the pop filter excessively long compared to the size of the mic and tripod and the gooseneck weakened over time being bent and would tend to gravitate downward having a hard time being held up unless coiled a bit.  It is like they included a gooseneck pop filter meant for a boom arm, with the mini tripod and it was just too long of a gooseneck.  The USB cord is long enough and works well, the other minor issue with the microphone is you have to be relatively close like within 10″ of the microphone with your mouth for ideal pickup.  Volume and gain drop off tremendously once you get further than 9″ or so from the mic and this is the same complaint I have with the next mic which is the Blitzwolf one, but the Blitzwolf one compensates for this by being part of a full boom arm mic kit.

Jackie reviewed the TC-777 from Tonor as well and my son was using the TONOR TC-777 for our streaming channel too. 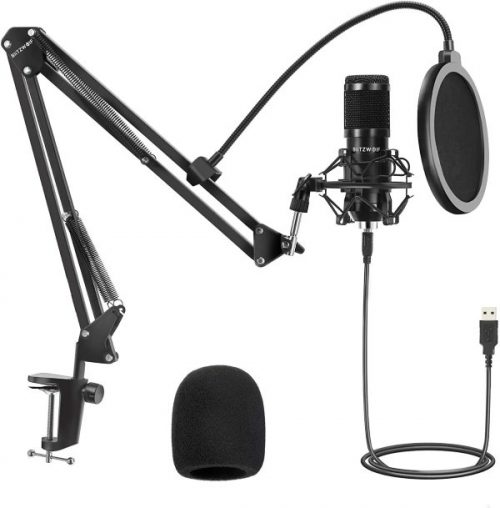 A solid mic if you ensure you have it 5-9″ from your mouth, the Blitzwolf Condenser mic kit includes a Wind Screen, Pop Filter, Shock Mount and Boom Arm.  It is much clearer and has more gain out of the box than the Neweer mic and is almost on-par with the TONOR TC-777 though you do have to have your mouth very close to it.  As a cardioid mic like all the mics in this round up you have to be facing the brand logo, it does pickup background noise but not as much when you have the wind screen on and as long as the sound sources are behind the microphone like a fan or air conditioner…etc.  Now the Blitzwolf Mic is my 2nd favorite in this round up, and you can see my review showcasing the mic here.

The fact that this mic is currently has a 20% off coupon with DRAGONBW this mic becomes a very budget friendly option and the fact that it uses boom arm to help get it close to your mouth without it having to take up space on your desk is a huge plus. 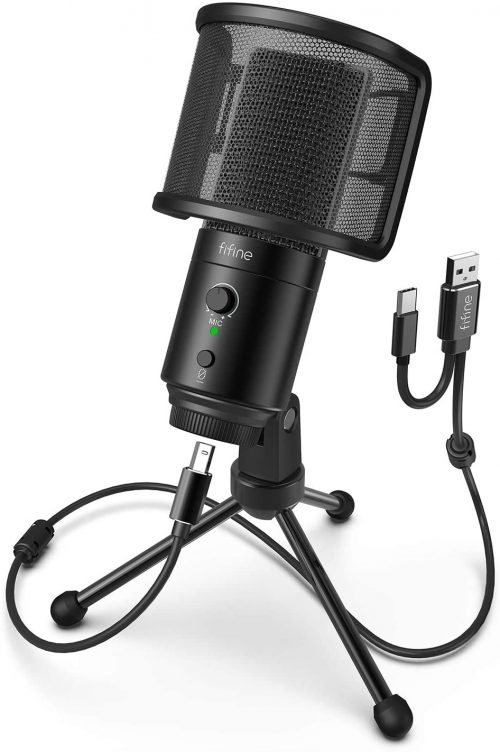 Hands down the best mic of the round up is the FIFINE K683A Desktop USB microphone and if you have around $50 ( it is slightly over $50 if you don’t have a clippable coupon or coupon code) this USB plug N play microphone has 3 features none of the other mics in this round up have and that include a mic input gain dial right on the microphone itself and a headset audio jack in the back of the mic so you have sidetone mic monitoring while you are speaking in the mic. The third feature is that it has both a USB Type A and USB Type C plug head.    The mic only has a pop filter and a much sturdier mini tripod than the TONOR TC-777 but it is cardioid mic so picking up only in the front helps reduce background noise coming from behind the mic.  This mic out of the 3 has the best and loudest input volume/gain with instant control and a mic mute button on the mic itself too.

My only wish is that this mic came as a boom arm kit with shock mount and wind screen not just the pop filter, and it has a thicker body than both other mics so that it doesn’t actually fit in the boom arm that came with the Neewer or the Blitzwolf Microphone kits (I know I tried).  The pick up is still ideal at about 6-10″ distance but with the gain control knob you can get much better voice pick up and volume at 20″ with this mic than you could with the other 3 microphones listed.  So while you this mic is not going to give you the features and quality of say a Blue Yeti Blackout or RODE microphone that costs 2-4x as much, it does a DAMN FINE job for the price, and I was more than impressed.  Want to hear how the FIFINE K683A Desktop USB Mic sounds, just watch the video

100% recommended as the best budget condenser USB mic in the roundup, my recommendation goes to FIFINE K683A now as the one I recommend when someone asks for a mic around the $50 price mark