As a fan of old school animation, Cowboy Bebop absolutely blows me out of the water. While I hate to show my hand this early, it’s a pinnacle of early anime, and a must-see for anyone just getting into anime who hasn’t quite caught the bug for the genre of entertainment just yet and you can watch all of it over on Funimation right now.

The animation is amazingly fluid for the period it was drawn in, color palettes shift from mellow hues of blue and grey to bright and vibrant tones depending on the tone of the scene itself. The score is a masterpiece composed primarily by Yoko Kanno and The Seatbelts. It consists of everything from soft, somber tunes you’d hear in today’s modern lofi lists, to jazzy romps during action sequences. The story is full of a diverse cast of characters, all with rather interesting dynamics that our main cast lack. The show is episodic, but with several overarching storylines. Everyone in Cowboy Bebop has a story, and some close with less than happy endings. 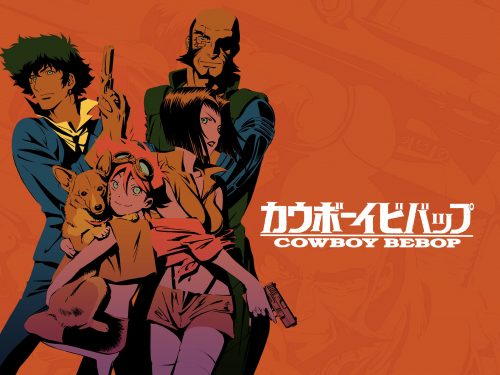 That’s definitely one thing you need to be prepared for. Many punches to the gut, multiple times where you’re going to feel like a fool for investing in a character, but frankly that’s a good thing in my personal opinion. I can appreciate a good cry. It doesn’t help that the character development is well defined, and while it does leave some holes as any anime might, I was quite satisfied with how things played out for a lot of my favorite characters.

It’s incredibly comparable to Space Dandy, but the latter is far less iconic. Tank, (The main theme) was a tune in most young adults ears at the time of Cowboy Bebop being aired to western audiences. The space romp’s catchy tunes inspired many a young animator today, myself included. Not to mention it was a prime piece of adult entertainment in a world full of TV that catered towards having a low budget, and keeping peoples attention with crude imagery and comedic interludes. The show had everything from action, to drama, to comedy, all bundled in one tight, sleek, space-ship hull package.

So I’ve droned on for hours already about the merits of the show, but “What’s it about?” I can hear you asking as you read this. Cowboy Bebop centers on our main protagonist Spike Spiegel, an exiled former hitman, as he travels space with his buddy Jett, a former police officer, collecting bounties and attempting to not starve. The year is 2071, the earth uninhabitable due to an accident with a hyperspace gateway. Humanity has colonized most of the stars at this point, and so travel is done entirely via ship from planet to planet. The two hunt bounties, exchange friendly banter, and generally are a lovable “buddy cop” duo. They pick up stragglers along the way including Faye Valentine, a woman out of time after a cryogenic freeze left her in suspended animation for fifty-four years, Ed, a child prodigy skilled at hacking, and Ein, a “data dog”, which effectively just means he had his intelligence enhanced by a shady agency.

The foursome meet at various points of the story, with Faye occasionally ditching to do her own thing. The dynamic between them ranges from the banter between Jett and Spike, to Faye making Spike absolutely nutty when they’re trapped in the close quarters of the Bebop, the crew’s space-faring vessel. All in all, the anime is a must-watch for people new to anime, and fans alike. It’s an absolute joy, and frankly, if you aren’t watching it over at you’re really missing out.