Pokemon Go is all over the game media outlets and if you don’t know what it is yet you may be living under a rock.  This is an Augmented Reality game that is for iOS and Android which allows you to collect and train Pokemon by leveraging your real world environment.  What this means is this game will get you out of the house and walking around, exploring, traveling and more to collect and build your Pokemon collection then find local Gym’s to go and battle them.

I will go ahead and go over what I have done so far and what is left to do.  First, the largest complaint so far about the game is the battery life on your phone, as the game will use GPS as long at is running it will drain your battery very quickly.  After setting up your character you may want to go into settings and put the game into Battery Saver mode which may help save your battery life.  I expect sales of iPhone 6 Battery cases or other Android battery cases to potentially increase for those who want to play this game for a long time outdoors. 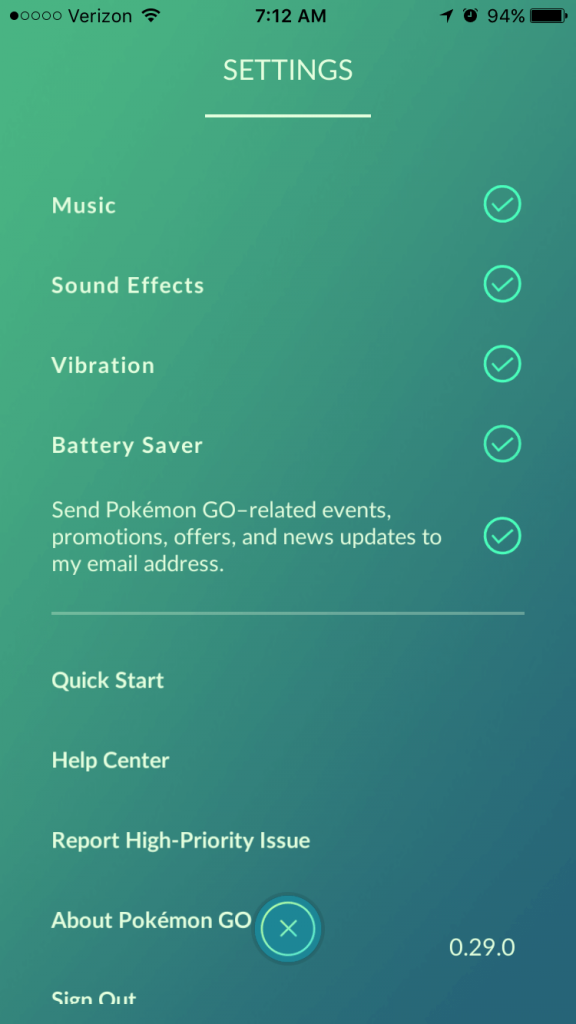 You are given a brief tutorial on what the game is about when you first load it up and have the option of signing up with your Google account or your Pokemon Trainer Club account which gives you some extra privileges in the game if you are a member. 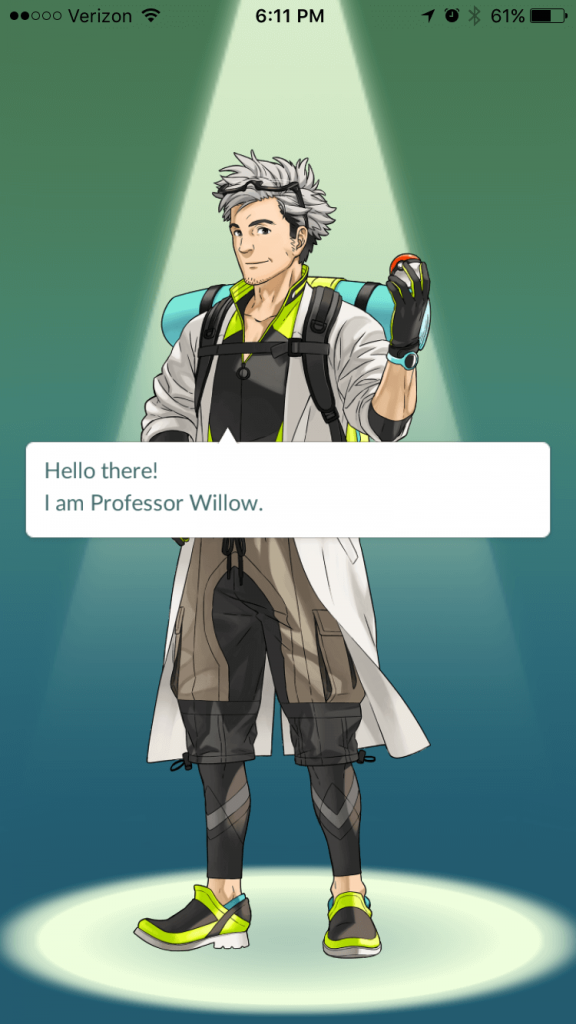 If you are familiar with games that track your movements and interact with your environment, then you will know this game is played by “walking” and going from location to location, or even simply walking in circles will reveal some Pokemon showing up out of the environment to be captured. 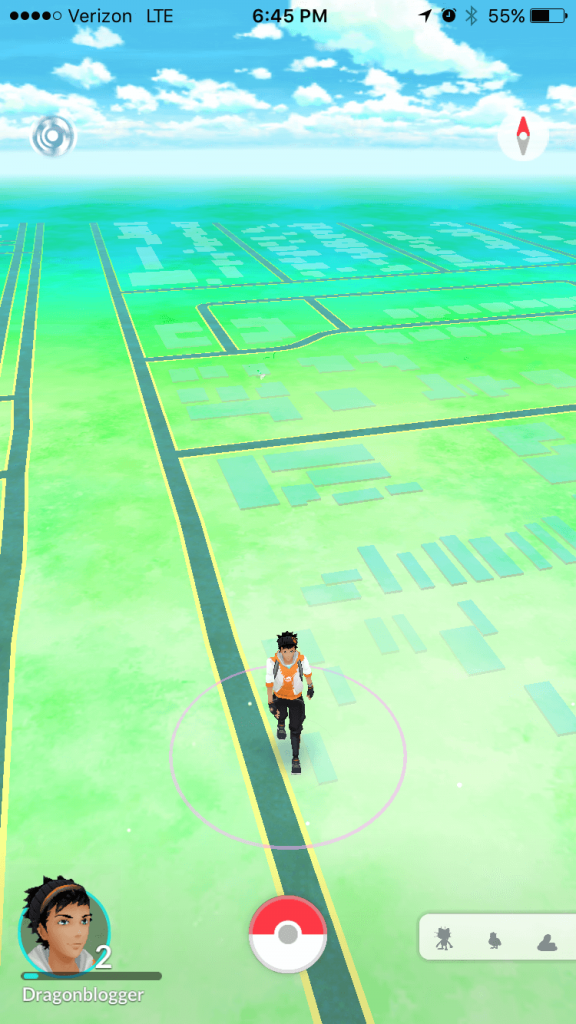 It uses a real-world map of your environment and shows you various landmarks in your area, these can be PokeStops which are areas where you can pick up items, additional Pokeballs (which are used to capture Pokemon) or more.  There are also Gym’s which I will cover later as well, you can’t do anything with a gym until you are level 5 anyway so you will spend time just collecting Pokemon until level 5.

So as you walk around above, you will see your map and location, a Pokemon will show up on your map in your general area when revealed.  Click on it and you will be taken to camera mode (though you can turn off AR and just see the Pokemon with the 2D map instead of camera). 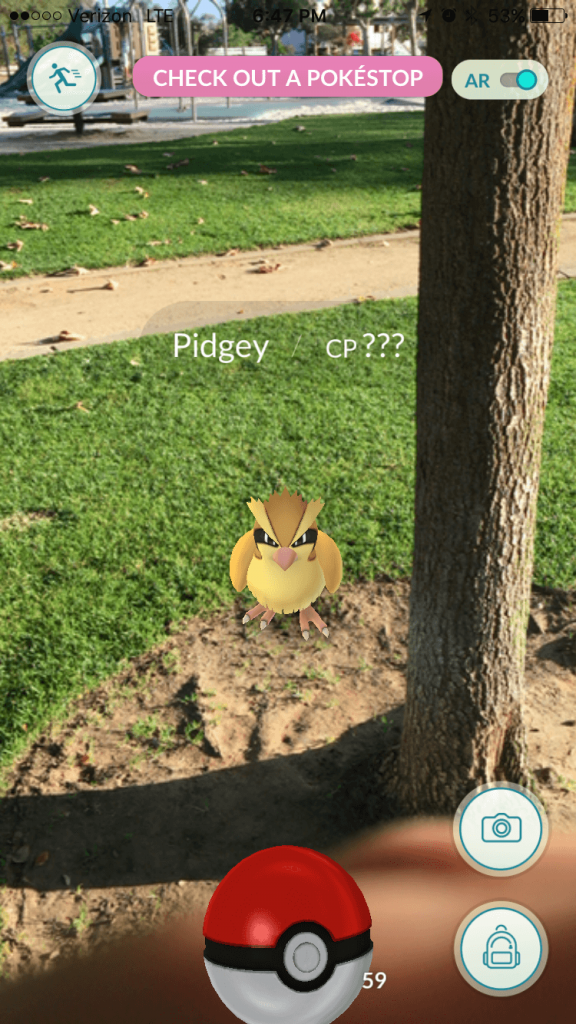 You drag and throw your Pokeball to capture the Pokemon and when it is captured you add it to your Pokemon collection.  The Pokedex lists all available Pokemon and the count is at 111 unique Pokemon that can be captured at the time of this article. 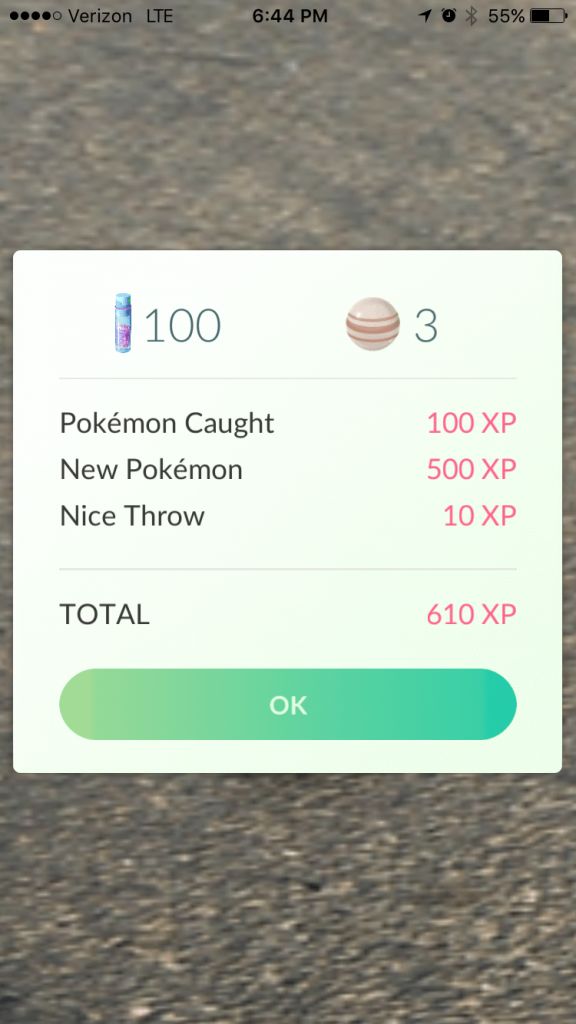 When you catch Pokemon you will earn experience and bonus experience for capturing new ones, though you will find and capture many duplicates and you will need to do that so you can Transfer them and earn candy by transferring them, each Pokemon can be unique so you may capture duplicates that have more HP or some other details so keep the best ones when you have duplicates. 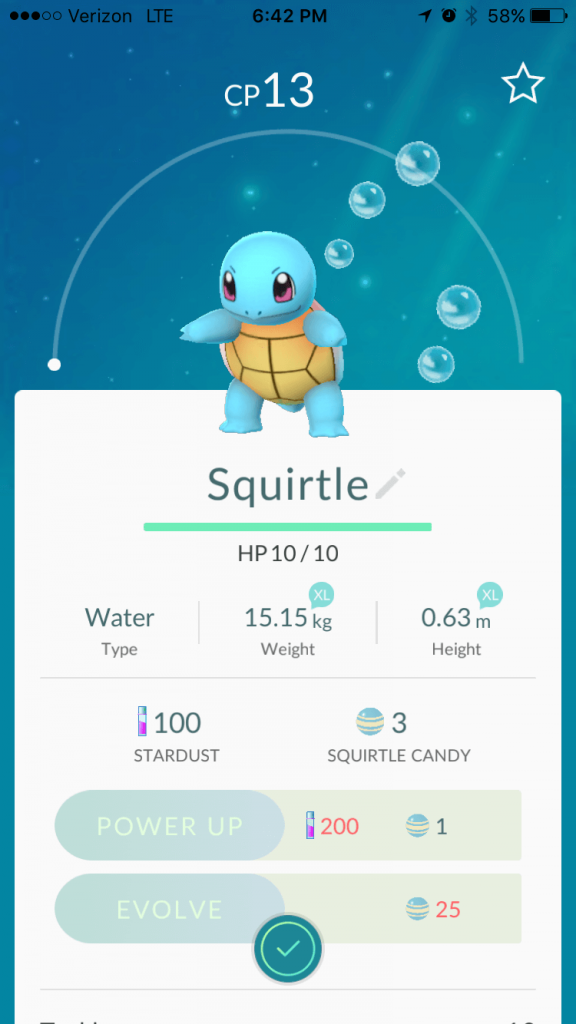 Each Pokemon has several attributes the most notable is HP (Hit Points) and CP (Combat Points) which is a relative score measuring how powerful a Pokemon is.  Each Pokemon lists it’s element type and weight/height as well.    You can Power Up Pokemon by having enough Stardust and Unique Pokemon Candy.  You can also evolve your Pokemon if you collect enough candy, the candy is specific to each Pokemon, so you one way to get more candy is to collect duplicate Pokemon and transfer them to the Professor to get more candy for that Pokemon. 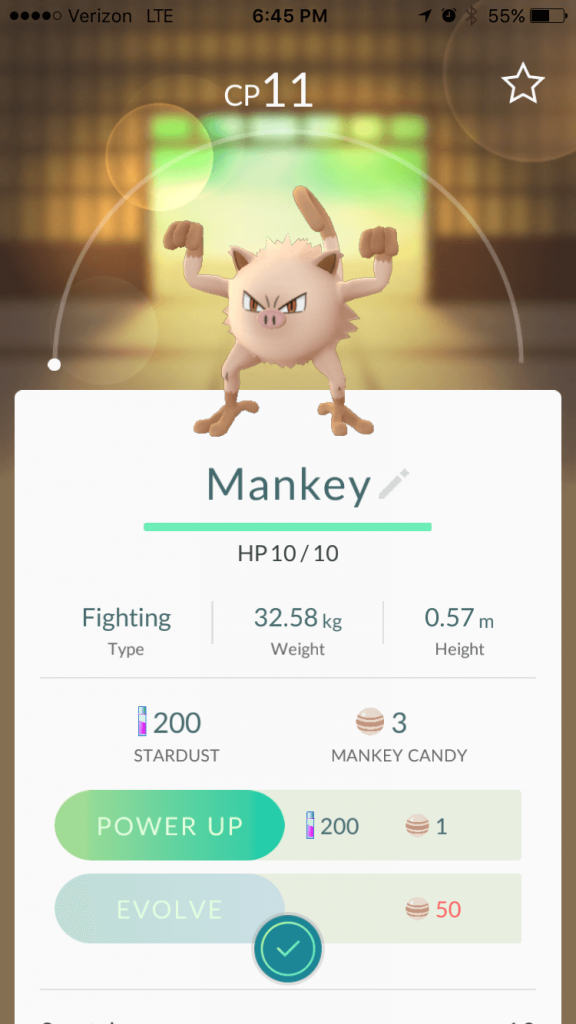 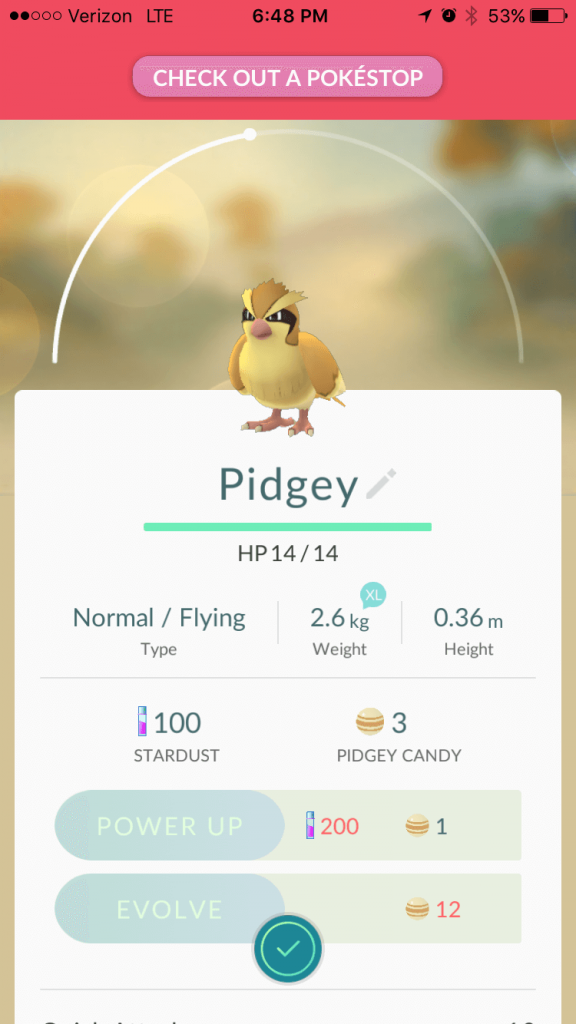 After you capture a Pokemon you just pick up your Pokeball by tapping it again. 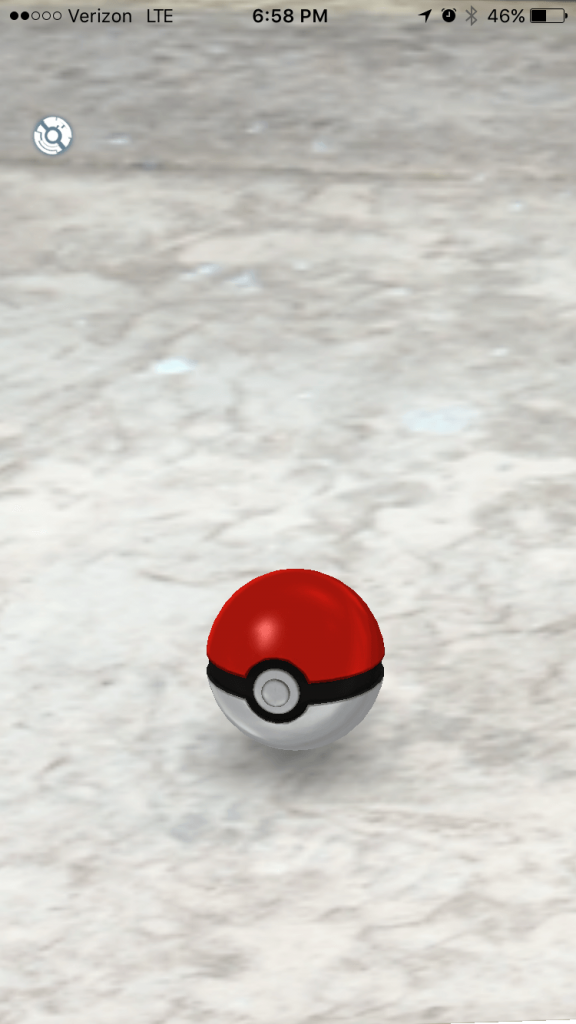 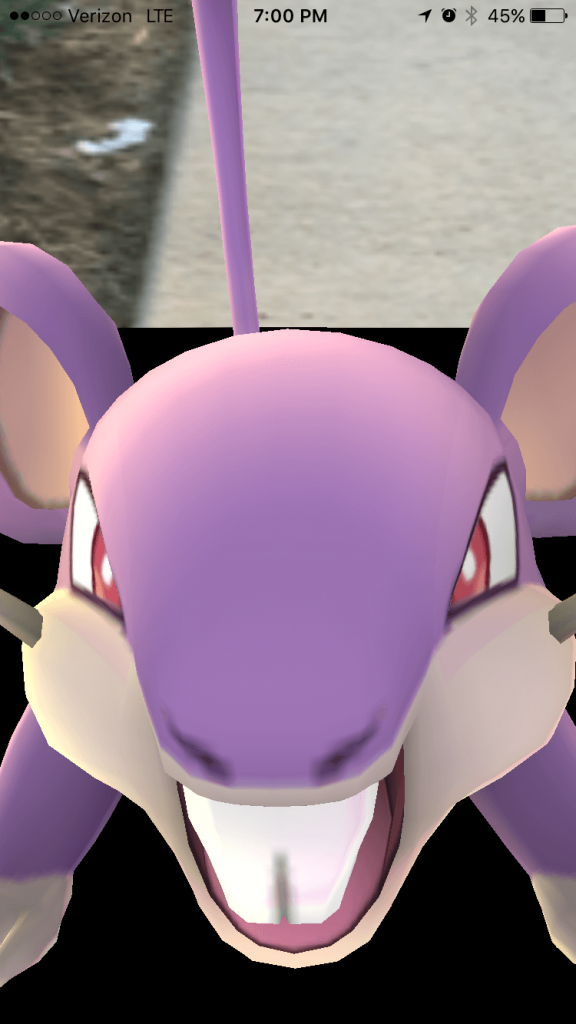 I had a few glitches in the game when capturing Pokemon where it would freeze, stick just showing the ball or the Pokemon and never change screens.  It got stuck, this happened pretty frequently when using Mobile Data on the first day, less frequently when using Wi-Fi, by day two the glitches were fewer and farer between and I chalk this up to just an overload of the game servers on initial release. 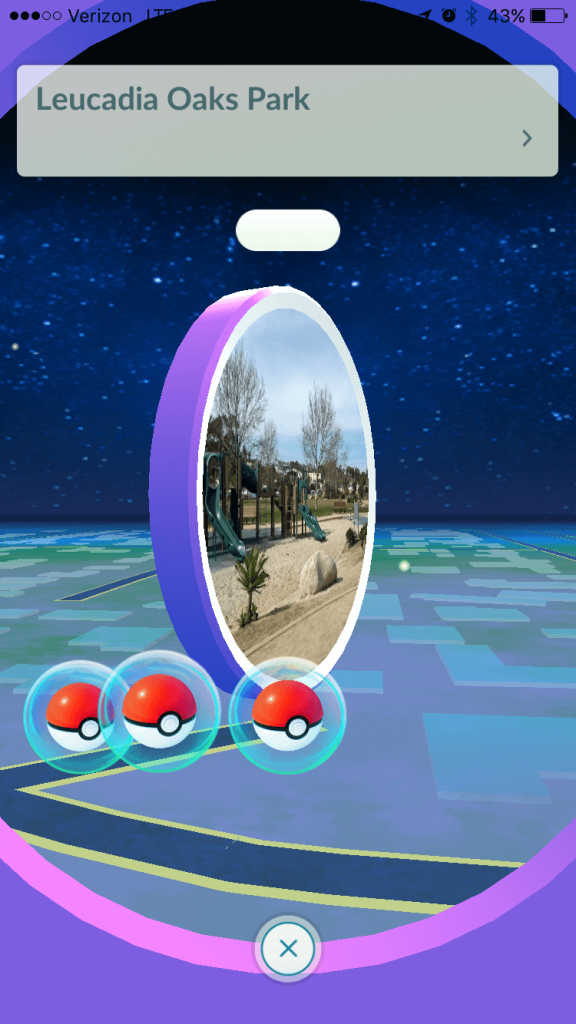 Real locations like parks, and places of interest become Pokestops where you can collect items by spinning the coin.  My closest park above is a Pokestop and I can go there daily to collect some more Pokeballs or random items.  There generally was about 4-5 stops within a 1 mile walk of my house, and there are 2 gyms within walking distance.

You also have the Journal which shows all your activity in the Pokemon Go game. 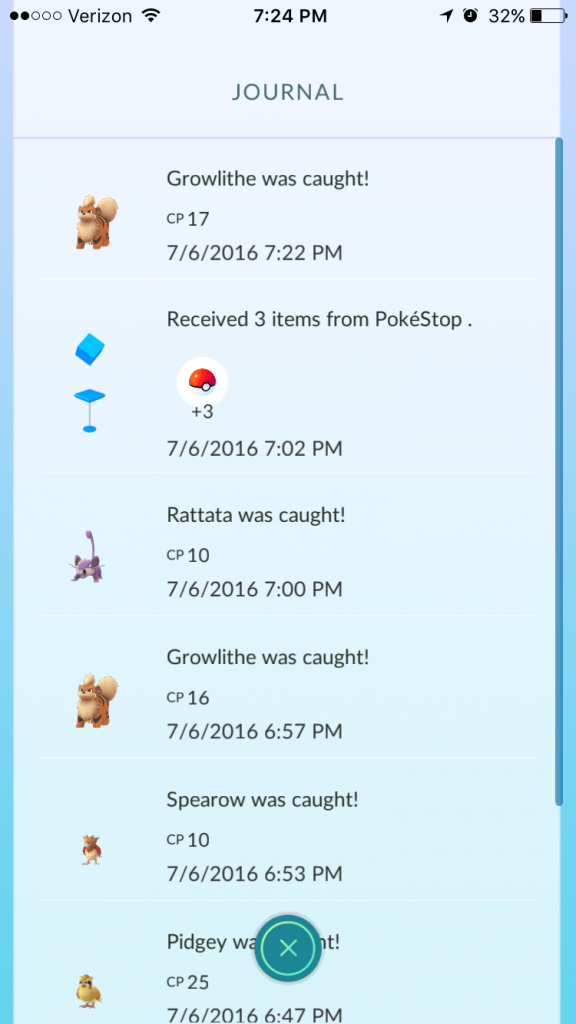 So far the rarest Pokemon I have caught was the Rhyhorn which is Pokemon number 111 in the Pokedex.  He also is CP100 after I did one Power Up on him. 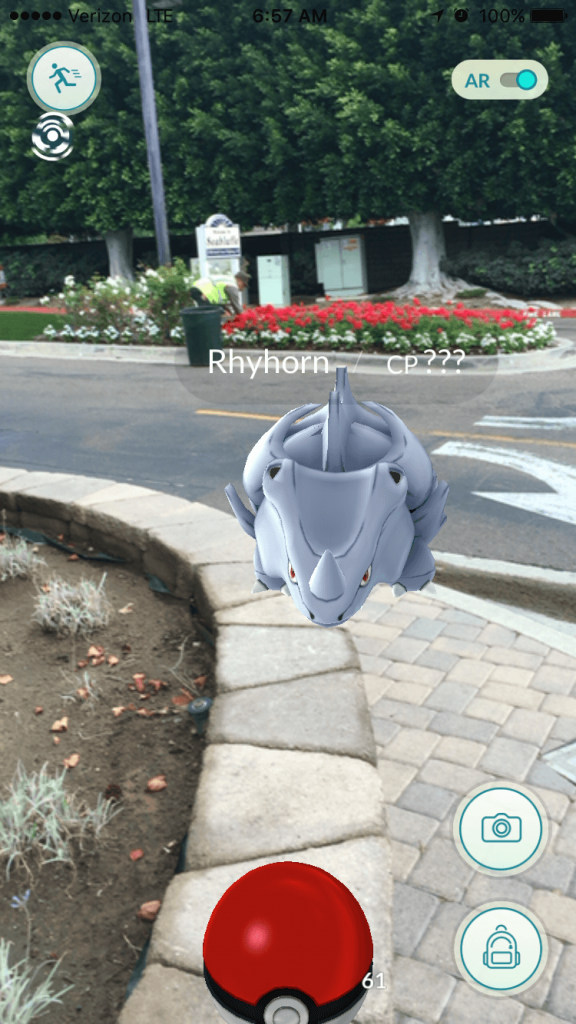 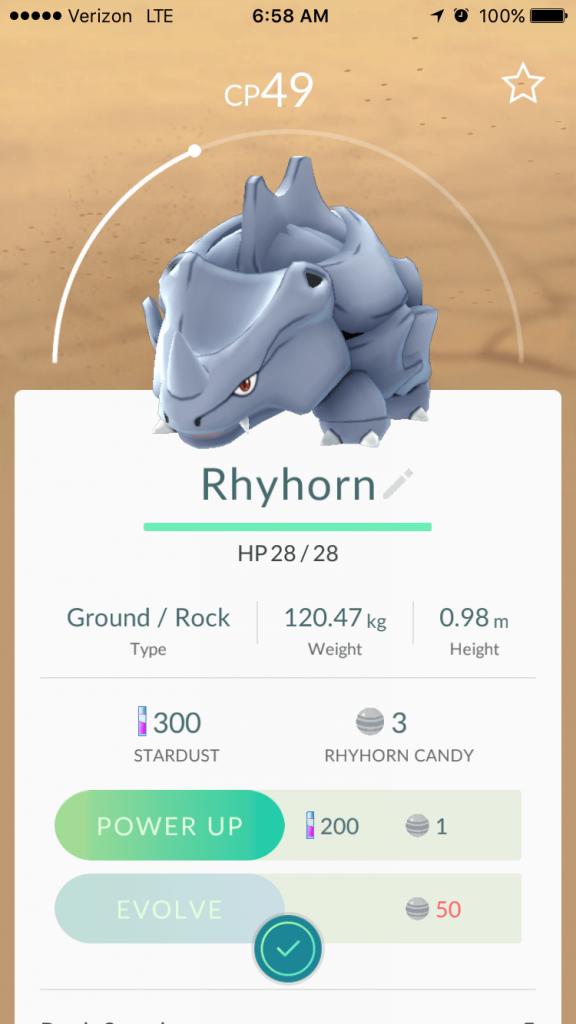 I was at a gym location early this morning getting coffee, but I am not level 5 yet so am unable to unlock and use Gym features, I will do a separate article showcasing what can be done with the Gym. 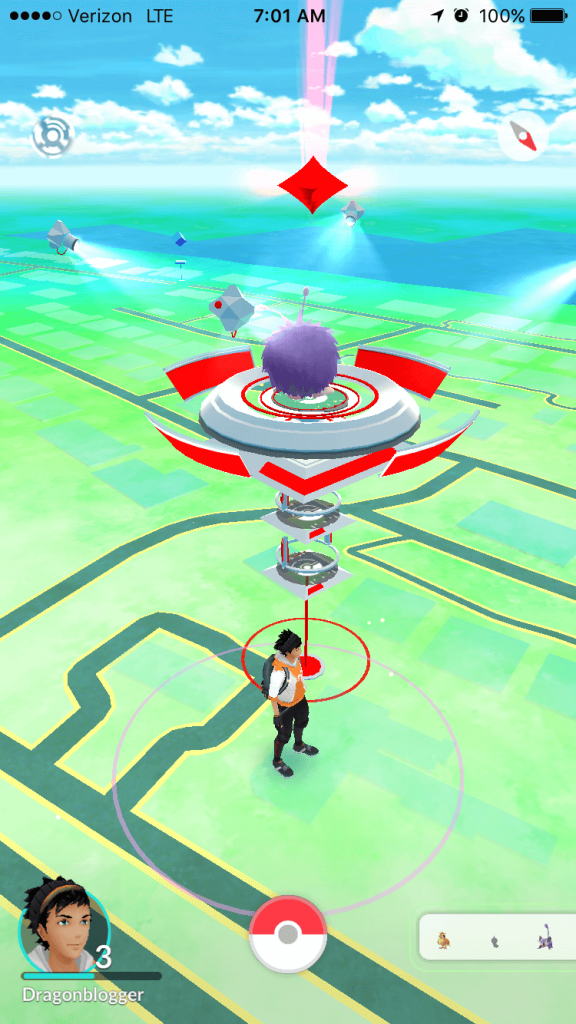 Of course Pokemon GO is free but is a Micro-Transaction based game, so you can always buy Eggs, Pokeballs and other items to help increase your Pokemon rates.  The incense that you are given at start attracts Pokemon and greatly increases the number you can find in a shorter duration around you, as they are lured to your area.  Both my kids and I are playing Pokemon Go for the time being with 2 of us playing on iPhones and my other son playing on Android (HTC One Remix) which has some glitches with showing the Pokemon in AR mode, so he has to capture them with AR mode disabled.

You also start earning achievements as you play. 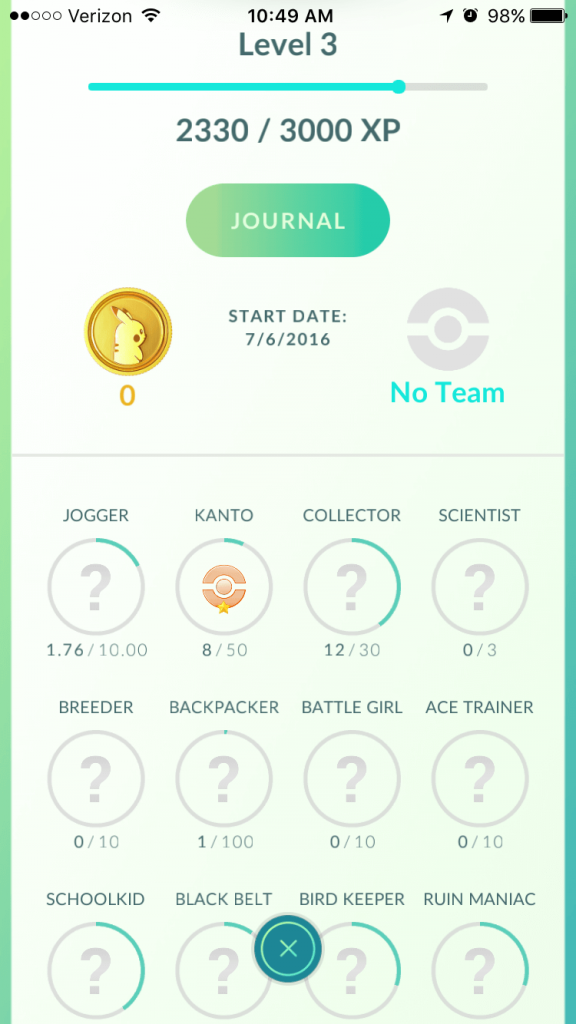 The game warns you each time you login to be aware of your surroundings and take this warning seriously, it is far too easy to spin in place and walk while staring at the screen looking for when a Pokemon will show up.  I can see this especially being a risk for kids who may walk into objects, not pay attention to surroundings…etc while playing.  So as a parent please make sure if your kids are going to be playing this game to never look at the phone while trying to cross a street, parking lot….etc.  I see accidents related to Pokemon Go being one of the next YouTube trending videos honestly.  I will also say that I myself must have looked insane to these ladies walking in the park pushing babies in strollers when they see me spinning around and focusing in on the grass flicking my phone.

Are you playing Pokemon Go yet?