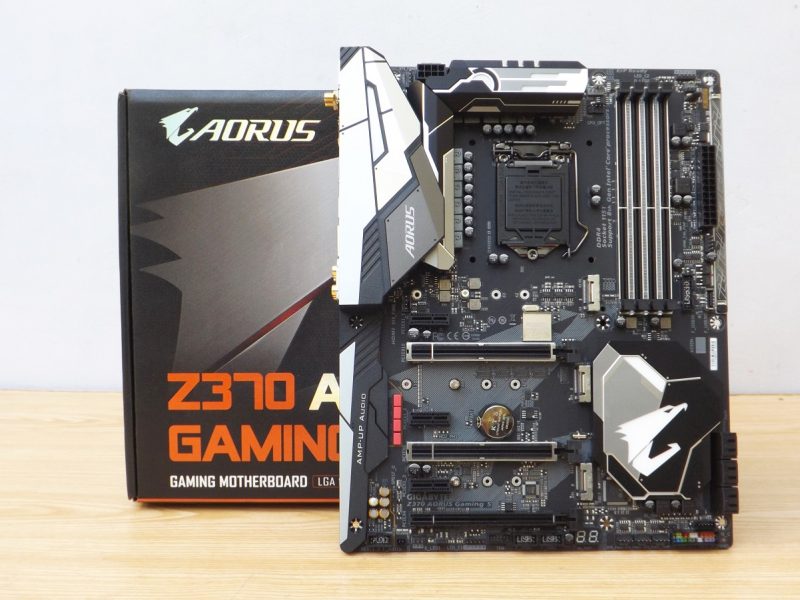 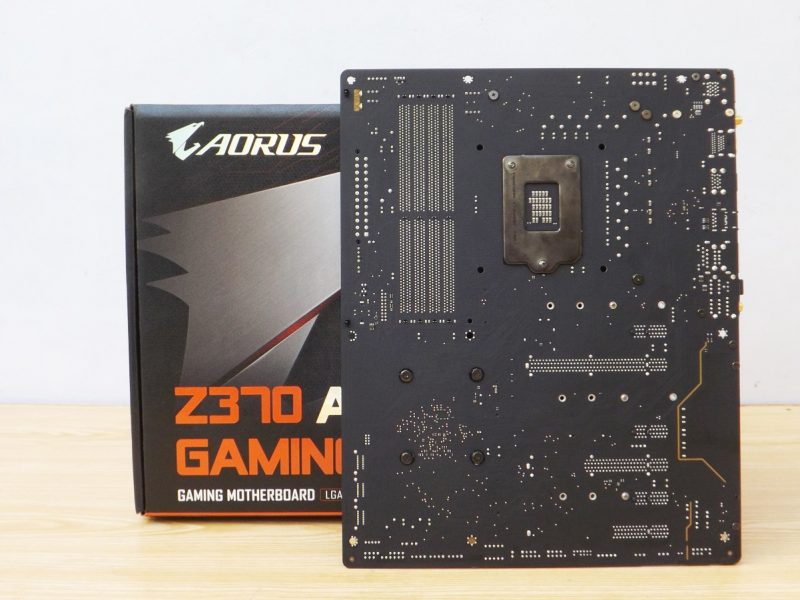 So this is the motherboard in all its glory. Most of the features are visible from this picture, but we’ll have a better look at as many components of this motherboard as we can. Not much going on at the back side of the motherboard. Also, one correction from the unboxing video, the golden/yellowish strip that’s embedded right into the motherboard isn’t actually an LED strip like we’ve seen on some of their other motherboards. 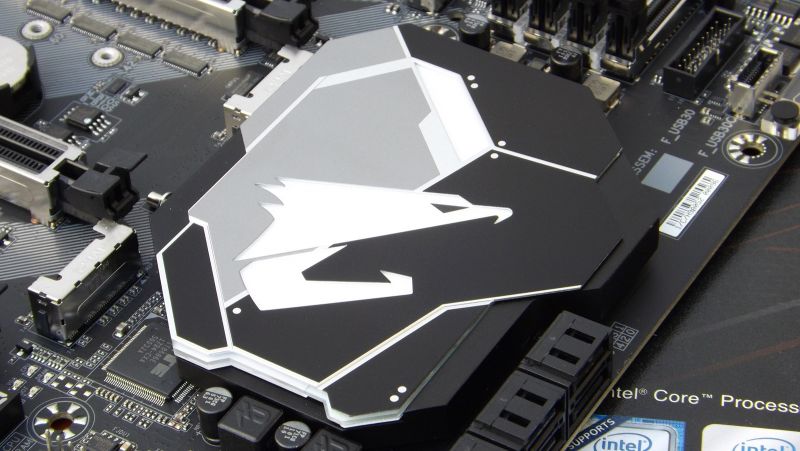 Here’s a view of the PCH heatsink. It’s a huge heatsink with black white and grey accent and also the Aorus falcon logo on it. the heatsink also sports RGB LEDs. 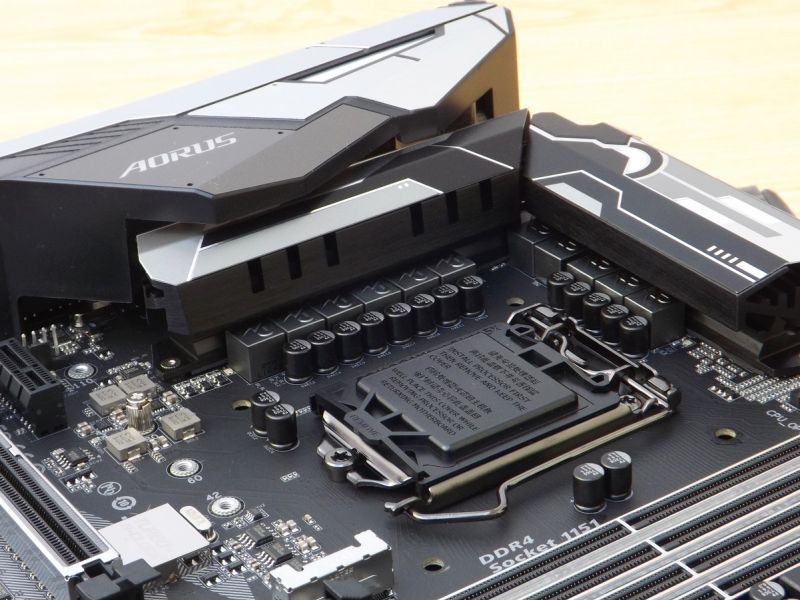 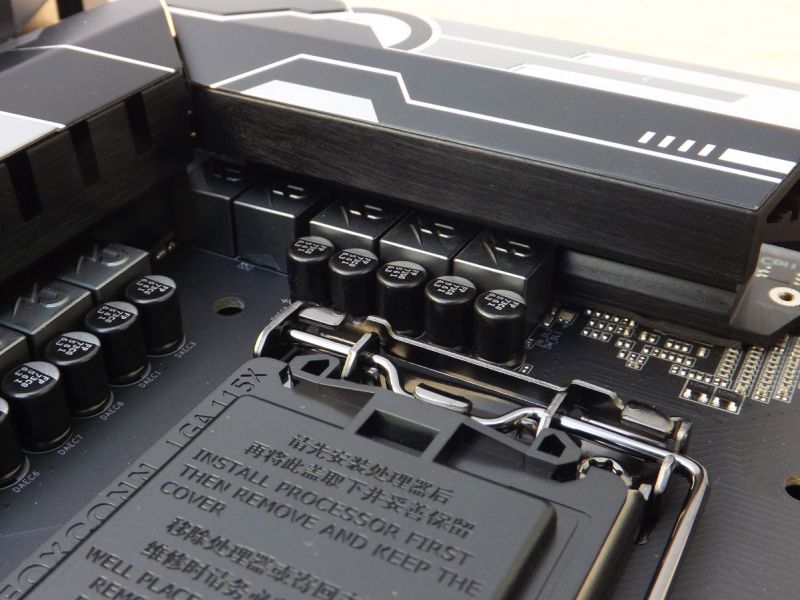 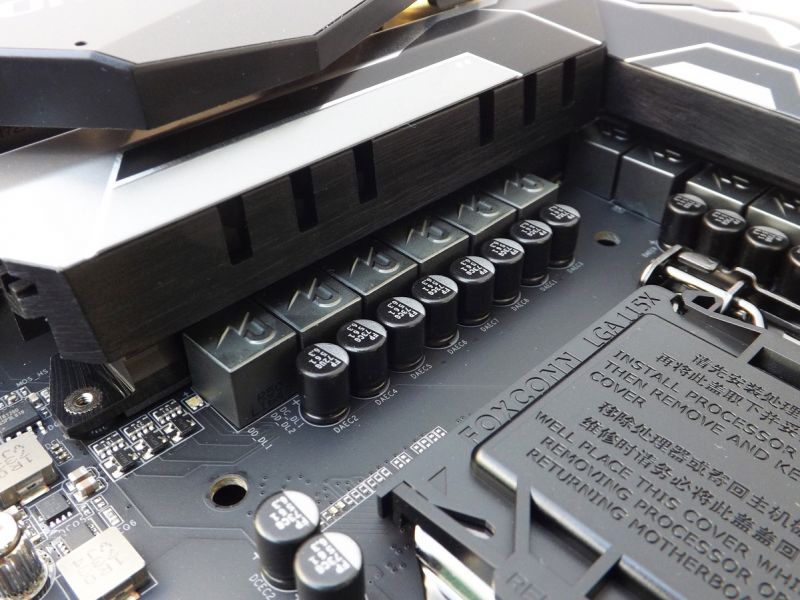 And here are a few shots of the heatsink over at the CPU socket side, covering the MOSFETs underneath. Behind that is a humongous I/O port shield. The theme is similar, but the heatsink over MOSFETs also got a heat pipe to transfer heat better. This motherboard features an 8+3 power phase design, you can count the number of chokes on here to conclude that. Both the MOSFET heatsink and I/O shield features RGB LEDs. 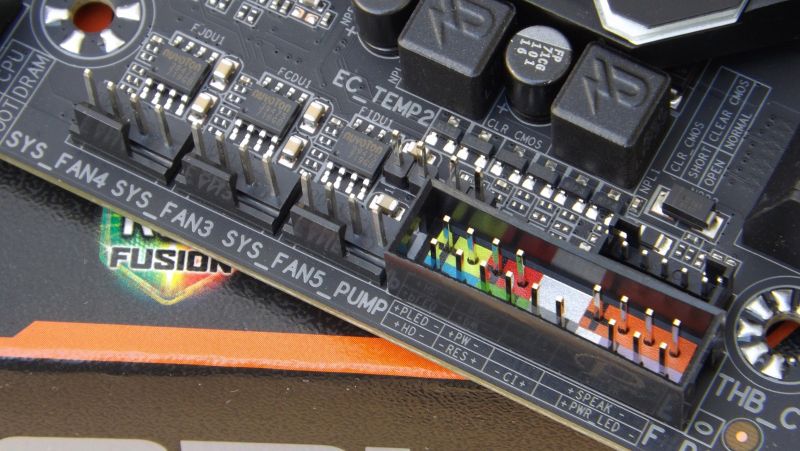 Now let’s check out the connectivity options on this motherboard. So at the bottom right corner, we have the front panel header along with 1x system-fan/pump header and 2x fan headers. And just above the front panel header, we have a Thunderbolt add-in card connector. And above the SYS_FAN5_PUMP header, we have a temperature sensor header and to it’s right we have the clear CMOS header. The placement of these two can be confusing at times. 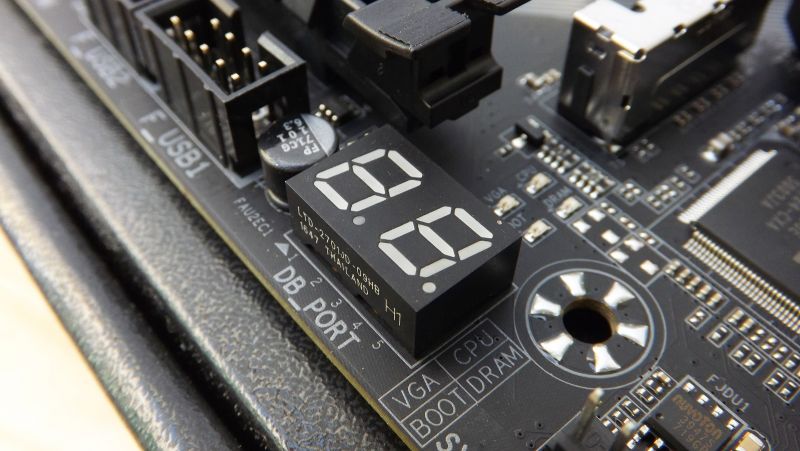 Moving a bit to the left, we have an LED debugger which shows the status of the system in alphanumeric. So if there’s something wrong with your system, you can look up the code in you’re getting on this LED debugger in the user manual. This will help you figure out what’s wrong with the system and ultimately in the resolution of the issue. 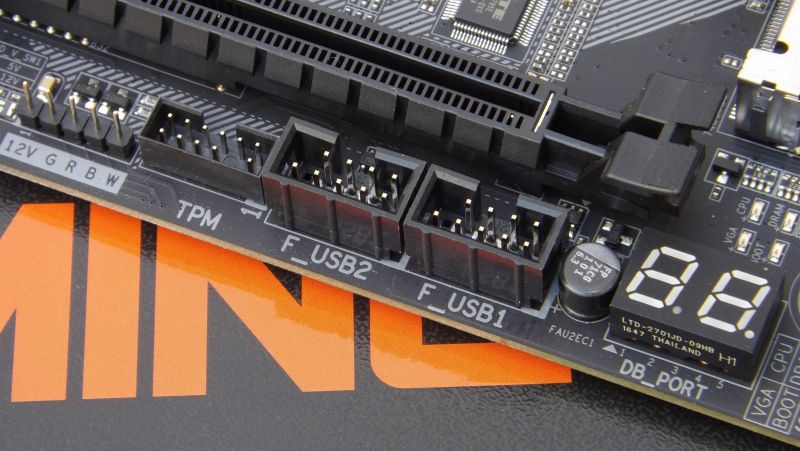 Next up, we have 2x front panel USB 2.0 headers, 1x TPM header and a 5 pin RGB header that supports a maximum of 2 meters RGB LED strip rated for 12V2Amp. 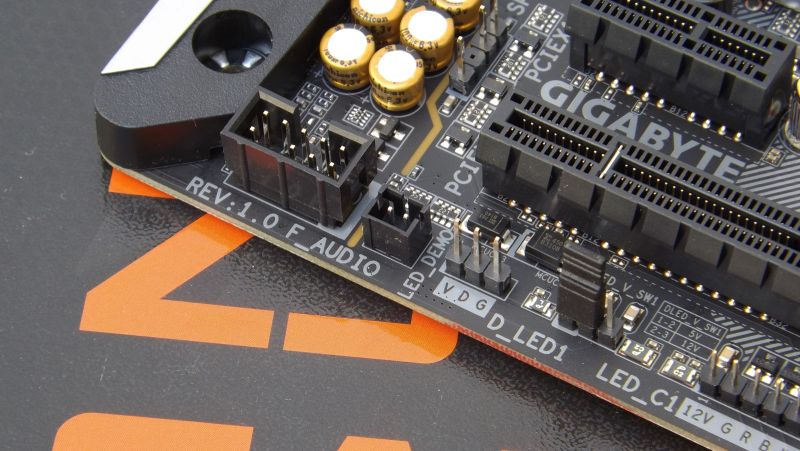 The 3 pin header on the right with a jumper on it is the LED strip power selection jumper. It lets you select the output supply to the LED strips to either 5v or 12v. In the current orientation, the 5pin RGB header at the bottom will provide 5v to the LED strip. There’s actually two of these 5 pin RGB headers to keep reading. And if you cover the right two pins with the jumper, then the RGB header will provide 12v to the LED strip. The other 3 pin port with VDG written beneath it is used to connect a standard 5050 LED strip up to 5 meters in length. There’s no mention of what the 2pin LED_DEMO port is on the motherboard, so we’ll skip that. And finally to the left-most, we have the front panel audio header. 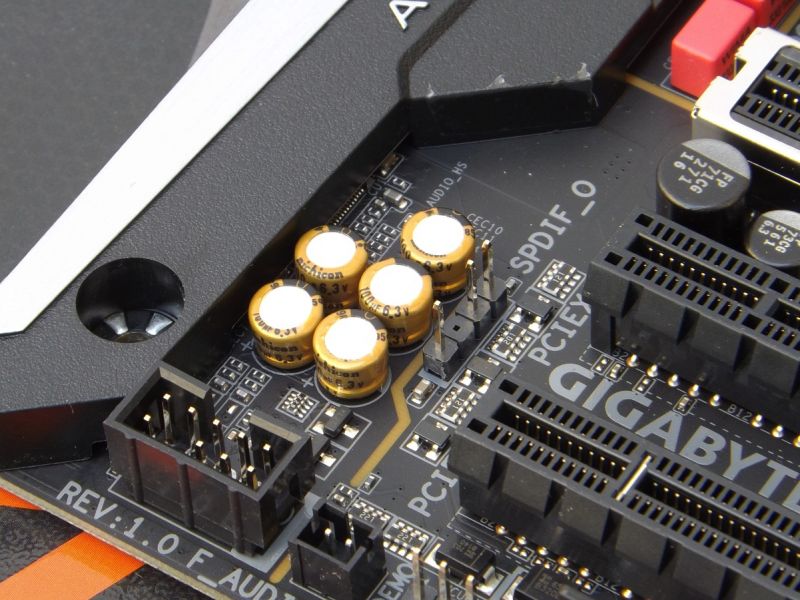 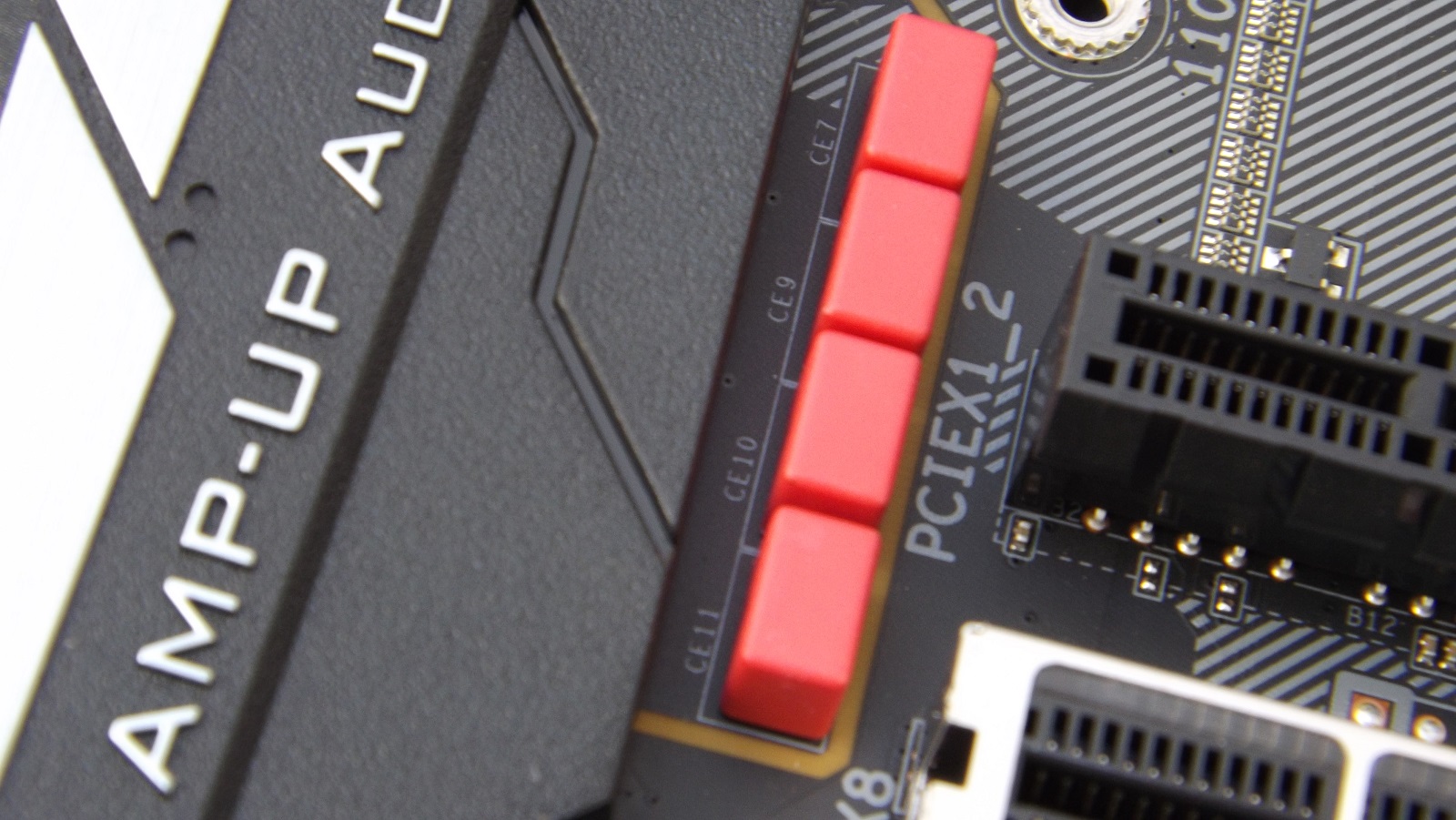 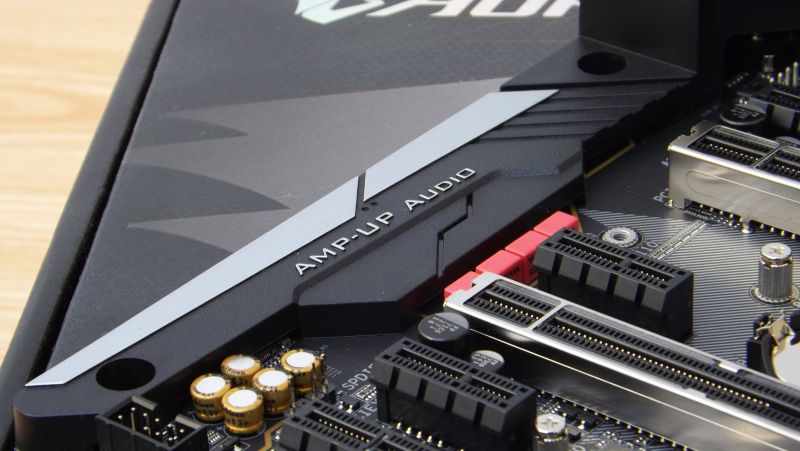 Here’s a look at the bottom part of the I/O port shield with AMP-UP Audio written on it. Beneath that, you’ll find the ALC1220 audio codec. 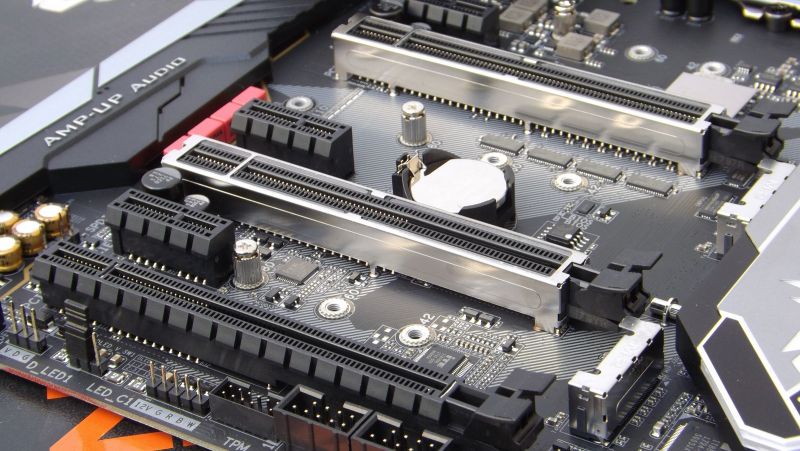 As for PCIe slots, we have a total of 6x PCIe 3.0 slots on this motherboard. 3 of them are x16 slots while other three are x1 slots. However, only the top 2 x16 slots are stainless steel armored and features RGB LEDs. The very top slot runs at x16 native speed, while the middle x16 slot runs at x8 and shares lane with the top x16 slot. So if you’re using both the top 2 x16 slots, they both run at x8 speed. The bottom x16 slot runs at x4 speed and also share lanes with one of the M.2 connectors on the motherboard. But in this case, if one is populated, the other becomes unavailable. Between the top 2 x16 slots, you can also see the CMOS battery. And also, 2 of the 3 M.2 drive screws are properly visible in this pictures. So let’s look a closer look at the M.2 slots in the next picture. 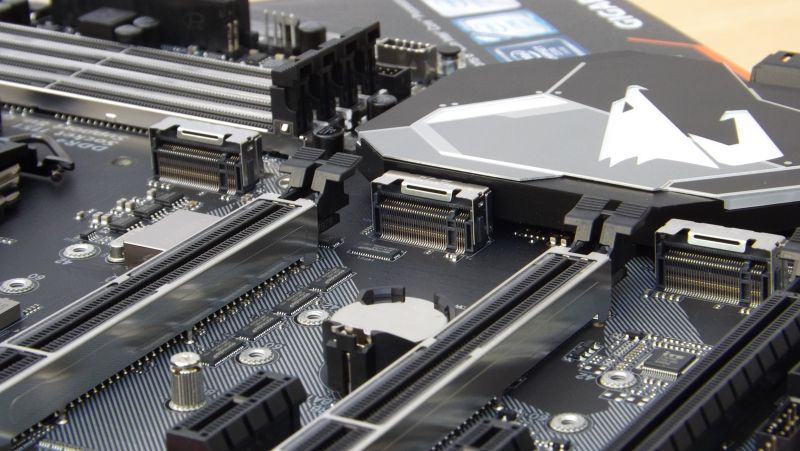 And here’s a view of the M.2 slots on the Aorus Gaming 5. There’s 3 in total, each utilizing 4x PCIe lanes capable of 4GB/s data transfer. Due to the limited amount of PCIe lanes, we have lots of shared lanes on this board. So the previously mentioned M.2 slot that shares the lane with the x4 PCIe slot is the bottom one. The other two M.2 slots are also affected by the limit of the PCIe lanes, so we’ll cover them in the next picture. The top two M.2 connectors supports M.2 SSD up to 22110 while the bottom one only supports 2280 M.2 SSD. 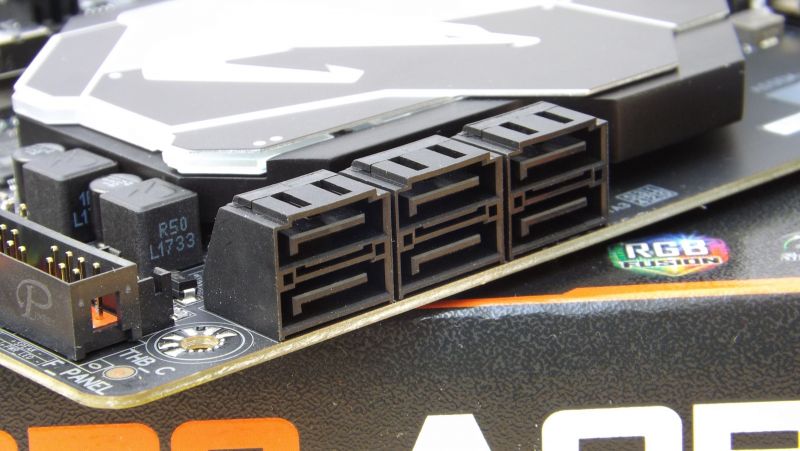 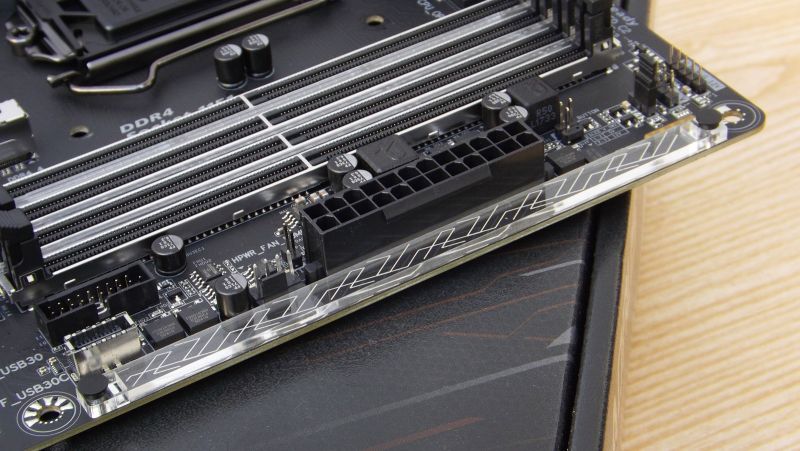 Next up, let’s check out the top right part of the board. So here we have a transparent acrylic panel that glows in RGB. In the middle, we have the standard 24 pin ATX header. Near the bottom, we have 1x USB 3.1 Gen 1 and 1x USB Type-C 3.1 Gen 1 front panel header. And just beneath the 24 pin ATX header, we have 1x temperature sensor header and 1x fan/pump header. 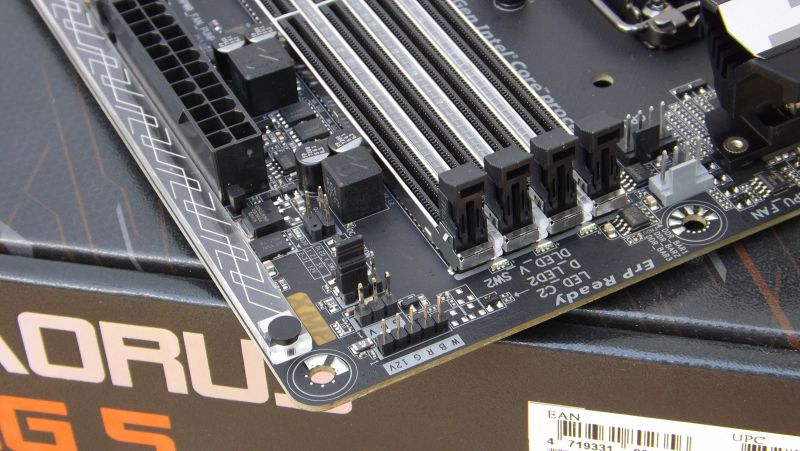 Then near the top, we have one more 5pin RGB, 3 pin standard LED and 3pin LED power supply jumper header. And above that, we have a 2+1 pin header that has OC_BUTTON written alongside it, there’s no mention of it in the board anatomy in the user manual. 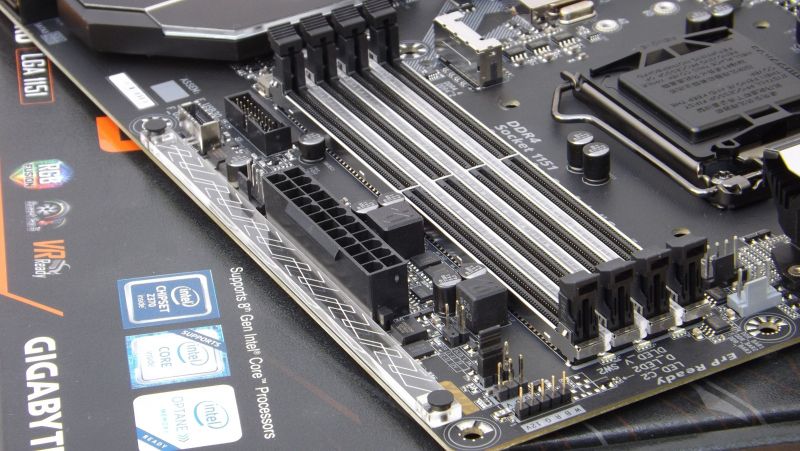 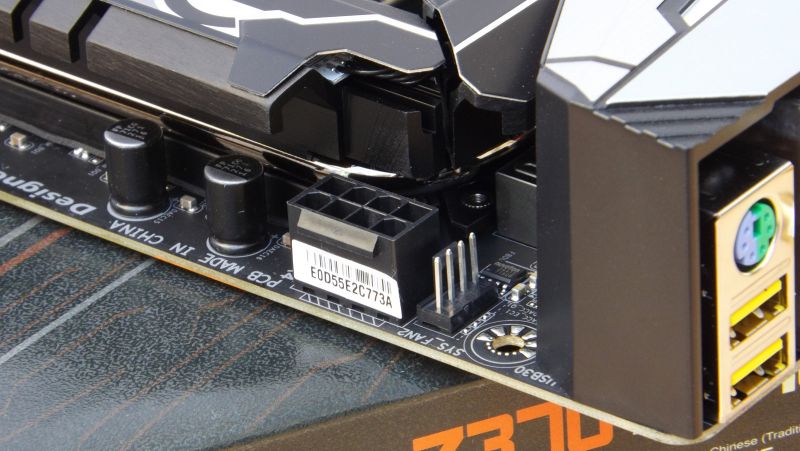 Near the top left corner of the board, you’ll find the 8pin EPS header and a 4 pin fan header. 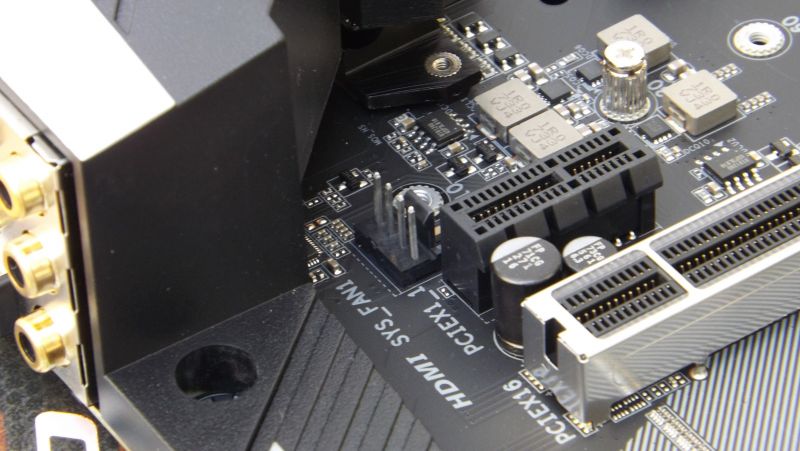 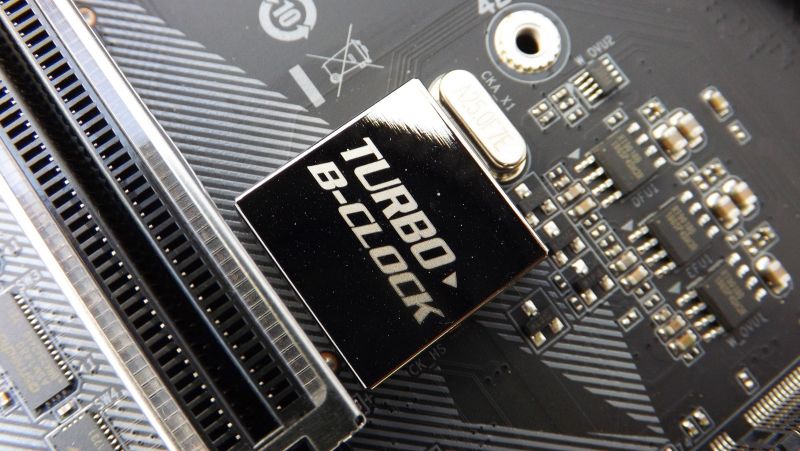 We also have a Turbo B-Clock on this motherboard that lets you manipulate the base clock or BCLK frequency in the range of 90MHz to 500MHz. However, that range highly depends upon the CPU used. 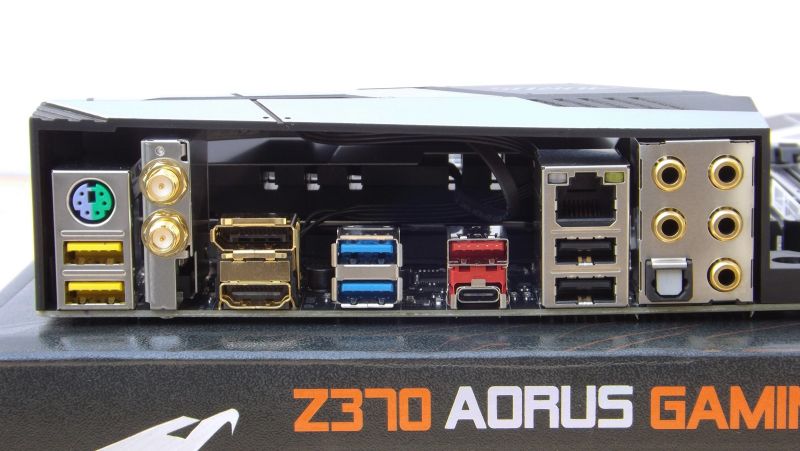 And finally, it’s time to check out the rear I/O options on this board. Starting from the left, we have a keyboard/Mouse PS2 port. There are two USB 3.1 Gen 1 ports that are DAC enabled. You can adjust the voltage supplied to these ports from the accompanying software. This enables you to connect longer USB cables without the loss of functionality that happens with cables longer than 2 meters in length. To the right, we have the wifi antenna connectors and 1x DisplayPort and 1x HDMI port. The 2x blue USB ports are also USB 3.1 Gen 1 but don’t support DAC. The red USB port is a USB 3.1 Gen 2 port and the USB Type-C port beneath that is also 3.1 Gen 2. Further right. we have the LAN port, 2x USB 2.0 ports, and 5 channel audio ports. 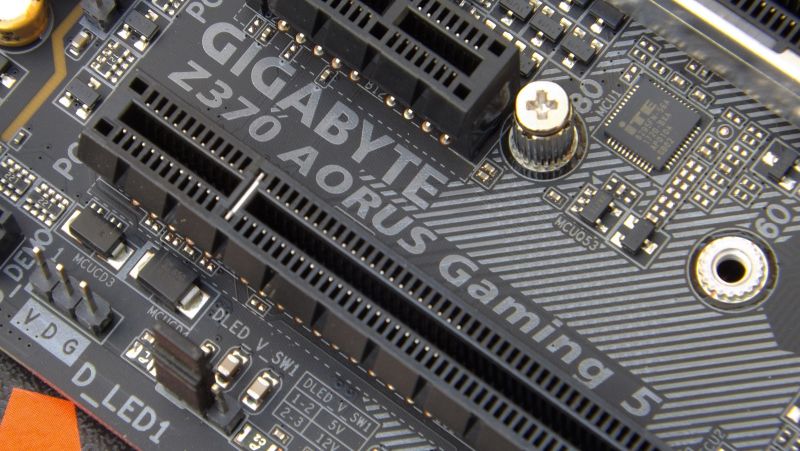 Before we conclude the closer look sections, let’s have a look at this Gigabyte Z370 Aorus Gaming 5 branding between the bottom two PCIe ports. 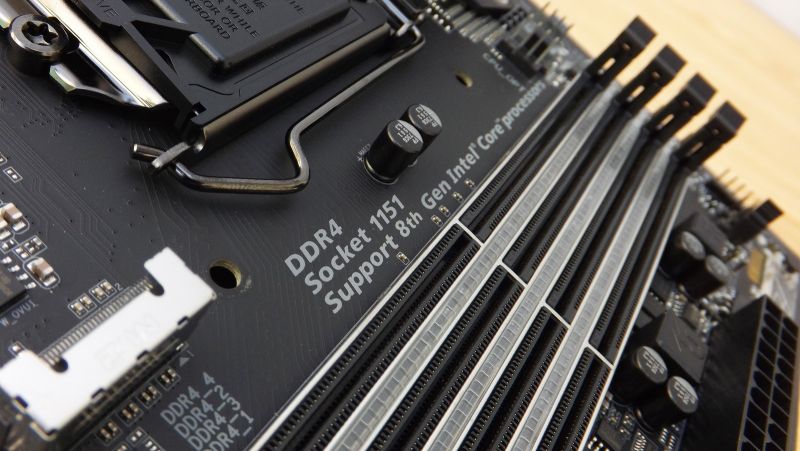 And the DDR4 and socket and support CPU gen text here.