Plenty of us have had more opportunity than usual over recent weeks to revisit old gaming favorites. As far as the MMORPG genre is concerned, by far the most popular, and one that is enjoying something of a renaissance is Runescape.

Believe it or not, the game has been around for more than 20 years, and in that time, it has garnered a following of more than 200 million accounts. In the process, it earned a place in the Guinness Book of Records as what was at the time the most popular game of its type. While that figure has since been eclipsed by Fortnite, Runescape still holds the record for most updates. 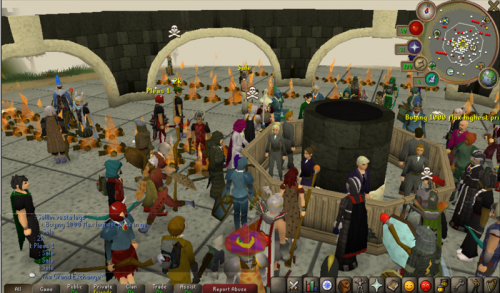 With such a large following over so many years, it goes without saying that playing Runescape has been influential in shaping many young lives. That influence can be broader than you might think.

In case you’ve spent the past two decades in your own special form of social isolation, Runescape is a medieval-themed game in which players interact with one another. It’s not all about doing battle, although there is certainly plenty of that. More time, though, is spent trading and bartering.

The game essentially has its own internal economy. As such, it provides a grounding in some basic principles of economics. Some have even found it to be the ideal training ground for market techniques that they have gone on to use in real-world trading in later years. Here, we look at three examples: The flip, affiliates and pump and dump.

Runescape players can buy and sell a plethora of tools, supplies and commodities within the game. Some are of more practical use than others, but all can boost your in-game wealth if you know when to buy and sell.

Click on any item and it will show its price change over time. By studying the chart, you can also get an accurate picture of its volatility. Bitcoin streamer Ivan on Tech explained in a YouTube video how he flipped oak logs in Runescape by carefully picking his moment to buy and sell. He’s gone on to use exactly these principles in crypto trading in later years.

There’s a certain elegance about games within games, and Runescape has several. Perhaps the best-known is flower poker. It’s basically played along the same lines as normal poker, but with different colors and types of flowers instead of cards in suits. It’s a fun game in its own right and adds an additional layer of depth to Runescape gameplay.

The really fun part with flower poker, however, is the possibility to engage in what amounts to affiliate marketing within the context of the game. Players can earn in-game money by promoting games. It’s exactly the same principle as you see with sites like the CasinoBlox website that are affiliates for poker and casino gaming sites in the real world.

The pump and dump

A pump and dump is a highly unethical practice that is seen in stocks, securities and even crypto assets. It involves artificially inflating the value of something by providing misleading statements and generating a sudden rush of buyers. The architect behind the fraud will already have large stocks of the asset, will sell them when this artificial demand is at its peak and will then disappear with immense profits as the value crashes.

Probably the most infamous real-world example was when Enron performed a pump and dump with the full knowledge and collusion of its senior managers and accountants just before the balloon went up in 2001. In Runescape, you see seasoned players orchestrating pump and dumps all the time. Ivan, whom we met earlier, told Cointelegraph magazine that he was on the receiving end of his first pump and dump in Runescape. It was also his last, as it taught him valuable lessons about treating any sort of hype with suspicion.

Runescape is not the only game that delivers valuable economic lessons like these, although it is certainly the one with the most players. Other examples include Second Life and even World of Warcraft. So next time somebody suggests that gaming is just a waste of time, tell them about the life lessons that games like these can teach.