If you didn’t watch the pilot episode of The Following last night and you want to see this show, stop reading right now.  Even if you like spoilers, stop reading!  This is one you want to watch, at least the first episode, to get the full effect of it (Fox is showing it again on Friday January 25).  Now, is it just those who have seen the show?  Good, here we go.

The Following is definitely an OMFG show.  When I did the preview for it a few weeks ago I was intrigued by the idea of a serial killer having a following of others who did their own killing, among other things, to further his agenda.  Actually seeing it happen is a whole ‘nother story. 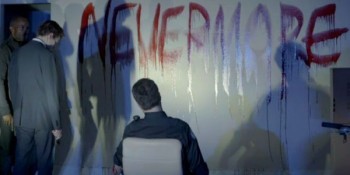 James Purefoy is a great psychopath, although that may actually be the wrong term for him.  He is a genius and obviously charismatic to have such loyal people, but man is his character Joe Carroll messed up in the head.  I mean the guy idolizes Poe, who was himself disturbed but showed it through poetry and stories rather than killing people.  Then again Kevin Bacon’s Ryan Hardy isn’t much better off.  I mean we see the guy drinking from a water bottle first thing in the morning and come to find out it’s vodka not water.

Poor Hardy doesn’t want to be involved in this problem, but only because he has authority issues.  Unfortunately for him, they really need him since he knows the most about Carroll.  Working with Mike Weston (who idolizes Hardy) and Jennifer Mason (who thinks he’s a waste of their time on the team), Hardy must prove his worth despite hating every minute of it.

Hardy isn’t an idiot though, he does understand that since Carroll escaped both Carroll’s ex-wife, Claire Matthews, and the last victim who survived, Dr. Sarah Fuller must be protected and confronted.  Neither has seen Carroll in a long time but Claire does have a letter she received from Carroll which she will only share with Hardy.  Well, they did sleep together at one point in the past which makes you wonder whose child her boy belongs to.  Sarah is scared but comforted by her gay neighbors and the police watch set up at her home.  Claire is more upset than worried because her son is old enough to realize the police are at their house due to his father.  Luckily for Claire she has Emma the nanny to keep him occupied elsewhere while she talks to the FBI.

The first shocker was the police station waiting room with all these women waiting.  Hardy is told they are Carroll’s groupies.  One woman waiting receives a text message, takes off her shoes, and walks to the center of the room with an ice pick.  After she takes off her dress, with nothing but underwear underneath, attention is drawn to her.  What might be more shocking than the ice pick is the writing all over her body, its Poe of course.  As the FBI, and especially Hardy, try to defuse the situation, the woman spouts Poe’s last words (“Lord help my poor soul”) and plunges the ice pick into her eye socket and through her brain killing her instantly.  She falls to the floor as blood pools around her and we get a view of her feet jerking as her body reacts to the death.  Can we say seriously shocked? 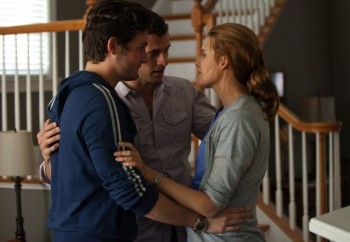 Unfortunately for the FBI, as the story unravels they find out that Carroll managed to get one of his security guards, Jordy, on his side.  The man has even begun to steal and kill dogs in the same manner as Carroll; cutting their eyes out first.  This upsets Weston the most (and as a dog owner and lover I almost cried over the German Sheppard) but even Mason is disturbed.  As the story progresses Fuller goes to bed with two guards outside her door and her neighbors reminding her they are right next door if she needs anything.  Unfortunately when the FBI show up at her apartment, they find a dead cop in her bed and bloody footprints which lead through her closest to a secret passage to her gay neighbors home.  Looks like Carroll had acquired some other helpers along the way and they just took his unfinished business to him.

When Hardy figures out where the guys have taken her, thanks to a photo of the two of them in front of a building, he leaves the rest of the FBI at Fuller’s place and heads there himself, without telling anyone.  Once there he races in and starts running around looking for Sarah when he hears her scream.  Unfortunately for him, he can’t take the effort since Carroll cut his heart all those years ago when Hardy saved Sarah Fuller.  Eventually though he finds a room with Carroll hiding from him.  Carroll hits Hardy with a board and taunts him as Hardy asks about Sarah.  Carroll reveals the screaming Hardy heard was a souvenir of him cutting out her eyeballs, one muscle at a time, and then drops down her body for Hardy to agonize over.  Then Carroll surrenders, although Hardy has other ideas and tries to strangle Carroll until the FBI shows up to take him away.

In prison, Carroll won’t speak to anyone except Hardy where he taunts him some more stating the pair will write the best sequel ever; both have written books in the past.  Carroll also tells Hardy he will be his friend, despite the past; this is the hint that he knows about the affair.  And of course he reveals that at any given time in the country there are 300 active serial killers.  Carroll smiles his beguiling smile at this and Carroll looks worried.  We also find out that Emma is another one of Carroll’s prodigies.  She has taken his son and met up with Sarah’s not gay neighbors.  Yeah we can see this is not going to be a good thing for Hardy and the rest of the FBI.

This show is definitely not for the faint of heart with blood coming in third after Purefoy and Bacon as the shows stars so far.  You can’t help but get the chills when Purefoy opens his mouth as Carroll and spouts Poe or his taunting words; makes the moral of the series trust no one.  Fox is giving the series 14 episodes with no breaks for this first season and I, for one, can’t wait to see what comes next.