There used to be a running joke for 5 years now that space legs would come to Elite: Dangerous before Star Citizen fully released and looks like that is actually happening.   Recently Frontier studios announced their next expansion pack coming in 2021 for Elite: Dangerous titled Odyssey which will finally allow you to take your commanders outside of your space ship to explore planets and it looks more than simply a walking simulator from the trailer and the announcement.  You can see the launch trailer here:

So while not much is known, what we do know is that there will be first person combat, customizable weapons, the ability for ships, people and SRV’s to be converged in the same location/instance and an array of new missions and objectives that are centered around getting out on your ship and doing in person.  Elite: Dangerous has VR when you are flying in your ship, but Odyssey expansion won’t support VR on release until Frontier can ensure the experience meets what they are looking for. Currently in Elite: Dangerous you can only land on moons and planets with no atmosphere which are generally barren except for the rare marked POI, there wouldn’t be much interaction or things you can do as a person outside of your ship, so we really need to see entertainment options outside of your ship I would love to see you dock at a station, exit and explore/game in something like 888 casino games in the various space station casino’s where you can spend credits and win/lose enough to afford an Anaconda. When I picture it, I picture the casino and slot scenes in The Expanse TV show where people congregate in markets and buy/trade/sell wares or experiences and such.

Walking around your ship is a must and one of the biggest immersive features that players want to see, the Anaconda and Imperial Cutter in the game for example sport 3 crew members and are huge, like football stadium sized or bigger huge so would be great to see you get out of the captains chair and walk around your ship with other players in multi-crew.  I am pretty sure that they will be adding the grinding thing too like customizing and upgrading weapons and equipment via Engineers that you have to get to and grind for on foot which would be fine, but I want to see interaction with NPC’s more than just single vendors and such. 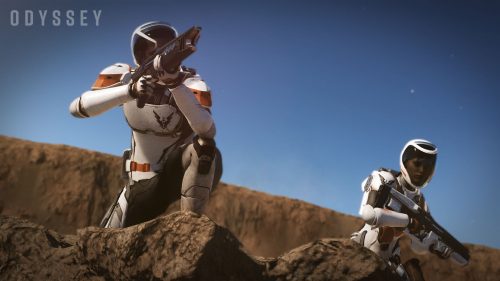 I am also curious how they will handle gravity on planets when it comes to getting out of your ship, my guess is they must have a “safe range” of gravity and won’t let you exit your SRV into walking mode unless your character could survive the G.  Some planets/moons have such high G that you ship gets pulled from orbit and can have trouble lifting off, a 5g+ planet would squash humans to bugs, they would be flattened if exposed.  But would be great to see the jetpacks on .2g planets where people can jump super high like you have the physics with the SRV’s now where you can bounce into the atmosphere on low G planets, but are much more surface bound on higher G worlds.

I have been playing Elite Dangerous myself since it’s initial release in 2015 and I backed in on Kickstarter, Elite is a video game series I have played in my arsenal since the original Elite was released in 1984 and I played on the Commodore 64 as a kid.  The sandbox space MMO that lets you explore the galaxy, become a trader, pirate, bounty hunter and create your own story/adventures has a lot going for it but it has run through it’s string of repetition and exhaustion.  Thargoid invasions and recent events have been a bit of a lull and with Fleet Carriers which are these massive ship carriers where you can store up to 16 of your ships on a single carrier and send them out into the deep space could be interesting but are very costly and offer little new actual in-game story content so far from what I have seen.

Looks like I will be getting back into the grind for Fleet Carriers soon, and just grinding up until 2021 when the space video game experience that is Elite: Dangerous gets it’s next big content expansion pack.  I am personally glad this game still has new life being breathed into it, it overall is one of my favorite all time space games.