Tesoro may not be a name that many of you have heard of but I’ve been following them for quite a long time now. Tesoro is a well known (in Asia) Tawain based company that is famous for their gaming peripherals, specially their mechanical keyboards. Even some famous Esport gamers like Virtus Pro, MyXMG etc use their peripherals for their domination in the field. And today for review we have their Excalibur Spectrum Mechanical keyboard which was announced back in march this year.

Seems like playing with lights and LEDs will be my next hobby as after reviewing some RAMs with LEDs and Plasma Tubes, here we are again with some LEDS. The Tesoro Excalibur Spectrum features per-key RGB backlighting and 7 lighting effects. The design is nothing fancy, but a standard home/office shape with US keyboard layout though the RGB LEDs and the lighting effect doesn’t make it look so simple. The keyboard also features 5 profiles and 512Kb built-in memory so you won’t have to go through the software to change your profiles at your friends home or anywhere. There’s also the PC mode and Gaming mode profile along with the 5 other profiles.

Tesoro’s Take on Excalibur Spectrum:
Tesoro Excalibur is a mechanical keyboard with an advanced backlighting processor. Unlike the original Excalibur which is capable of recording and storing macros, Spectrum also has a number of stunning illumination modes. Using this keyboard is a lot of colorful fun.

Excalibur is the first Tesoro keyboard to have a classic solid look. It can be used with a gaming rig as well as on an office desk due to its straight and strong lines. The supreme spectrum backlighting, however, adds more color to our guy. Each key’s color can be set individually, the illumination will react to keystrokes, change colors in different ways, and do other crazy things.

The specific model I have for review is the TS-G7SFL (RD) which features Red Khail switches that are very similar to the Red Cherry MX switches. 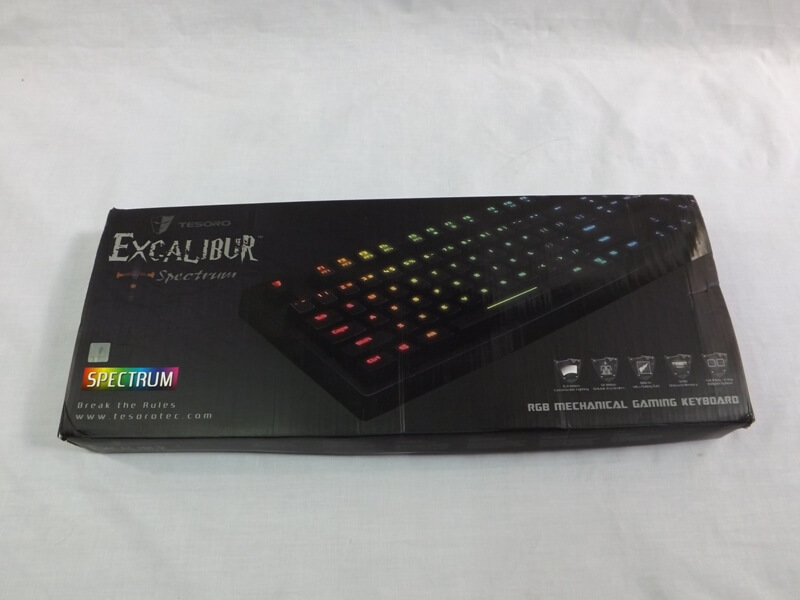 So the keyboard comes in a rectangular box painted in their theme color, purple. On the front we have the keyboard picture with the lighting effect set to Rainbow Wave. We also have the keyboard name and company’s logo on the front and also some features listed at the bottom right like 16.8 million customizable lighting, 60 million reliable keystrokes, full N-Key/6-key rollover option etc. 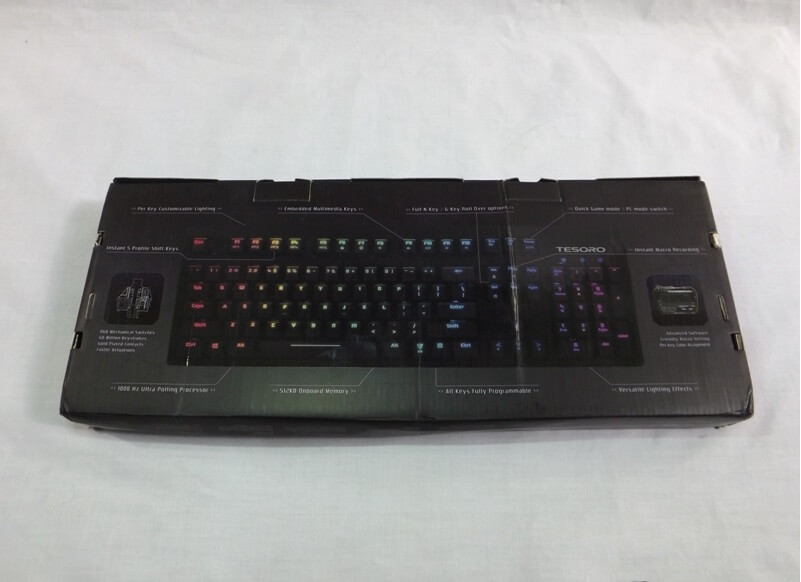 On the back once again we have the keyboard picture with lighting effect set to Rainbow wave and some more details about the keyboard and keys.

If you can consider this position of the box as top, then at the top we have a chart of mechanical switches with a green sticker next to the one that are inside the particular keyboard. Also there’s a mention of their website from where you can download the driver, manuals etc. 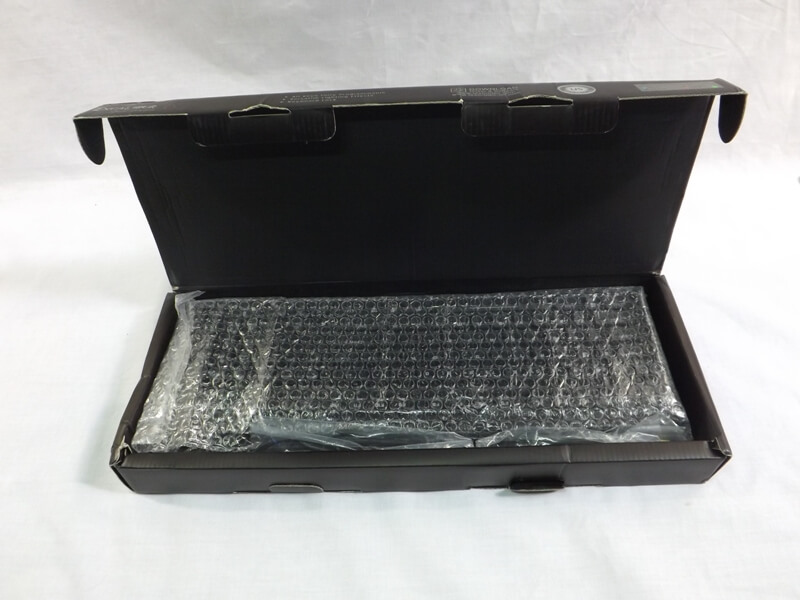 Once you open the box, you find the keyboard wrapped in bubble wrap for safety purpose while shipping and handling and that was all. No special compartment or something specifically designed to hold down the keyboard in place.  Seems like a lack on interest by Tesoro on the packaging here. 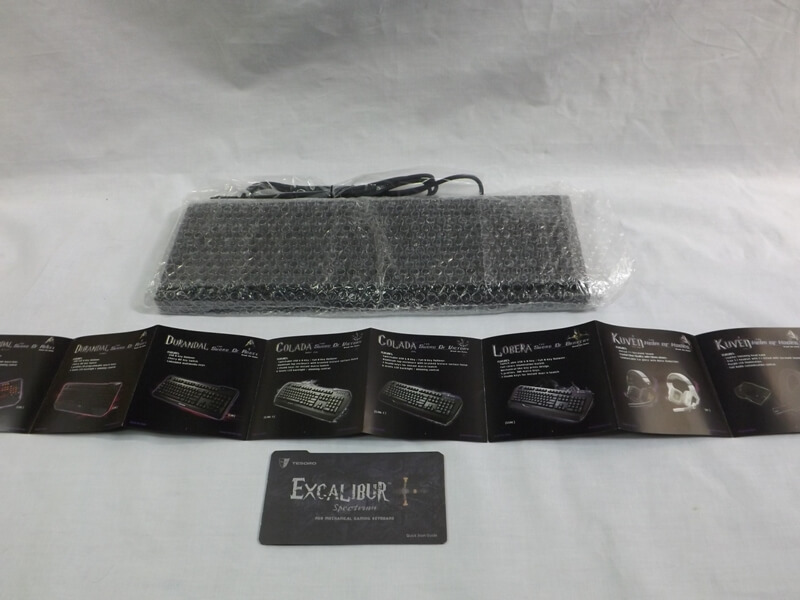 Beneath the keyboard, there was this product catalog and the instruction manual with the warranty card attached to the back of manual. 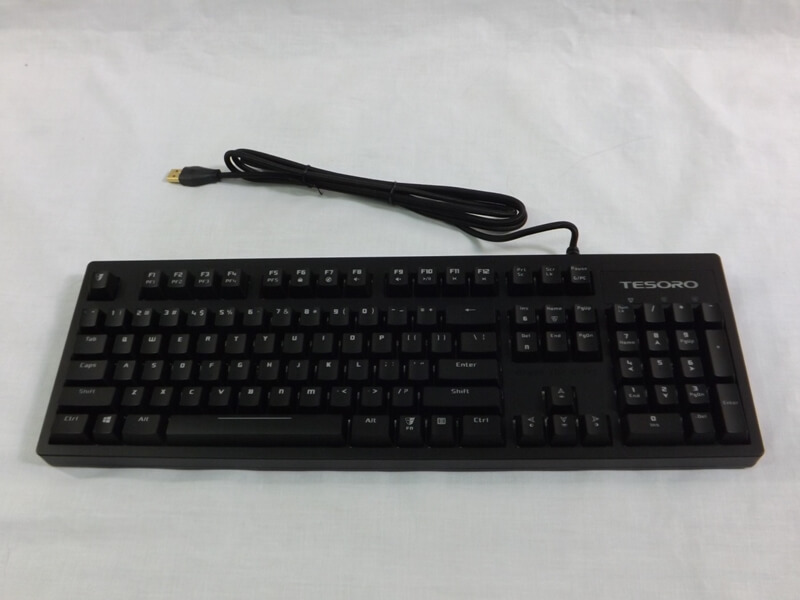 And here’s the main thing, the Tesoro Excalibur Spectrum, not in it’s full glory as you haven’t seen the lighting yet ;) Anyways, we have the Excalibur Spectrum in the standard keyboard design that’s easy to adjust to for hardcore gamers, casual gamers and as well as office users. Without knowing the specifications, the keyboard just look like an ordinary keyboard, but once you lift and feel the weight and build quality, you know it’s not so ordinary, the Tesoro logo over the numeric pad should be enough to tell that. 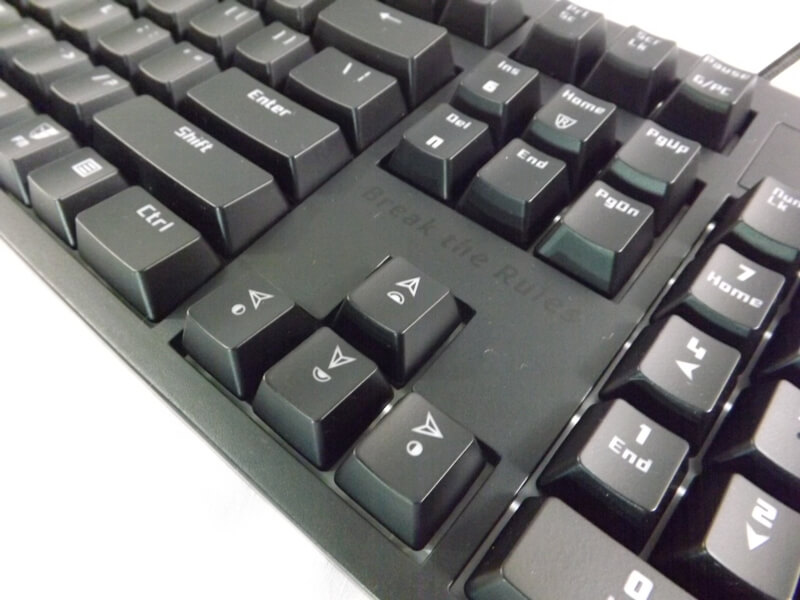 It was not clear in the picture before this one, but there’s also Tesoro’s slogan “Break The Rules” written right above the arrow keys. 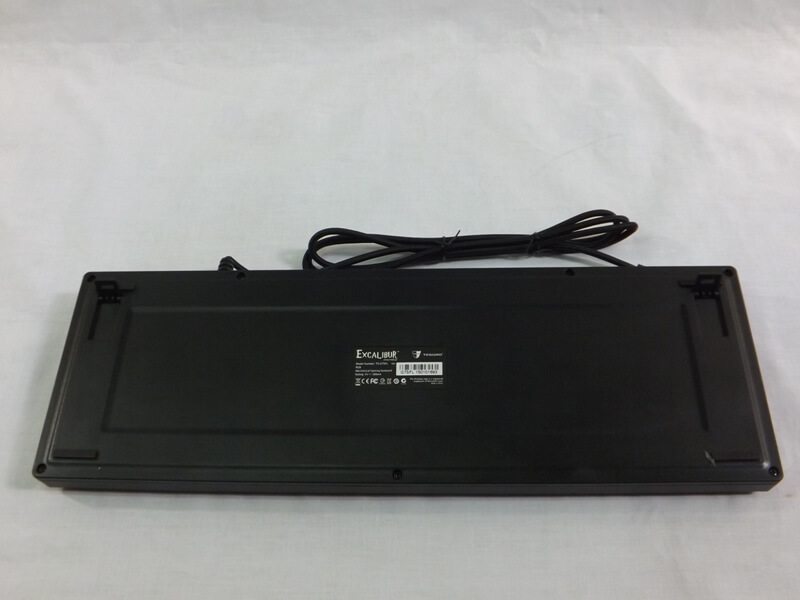 At the back of the keyboard have 4 rubber feet to hold the keyboard in position and then we have 2 stands to give the keyboards a little lift. In the middle, we have sticker that tells us the model number of the keyboard. I’m not sure if Tesoro’s other keyboard have them or not, but Excalibur Spectrum doesn’t have the cable channeling/management/routes at the back, having them is always a plus point.

Let’s talk about the layout and functions. All the functions on the keyboard is performed by pressing down the “Fn” key which is present on the bottom row with respective key to perform the respective function. We have 12 different functions on the F1-F12 keys. From F1 to F5 we have the profile keys. F6 is the function key for locking down the keys in case you’re leaving for a while and don’t want anyone to press anything and from F7 to F12 we have different multimedia functions. 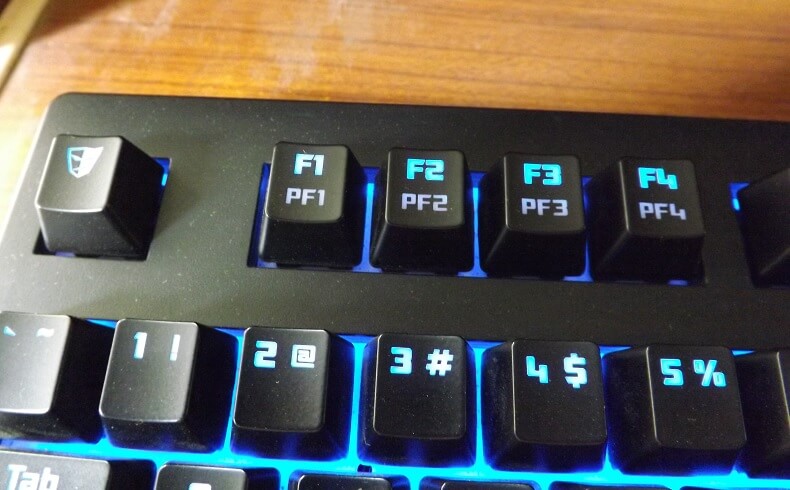 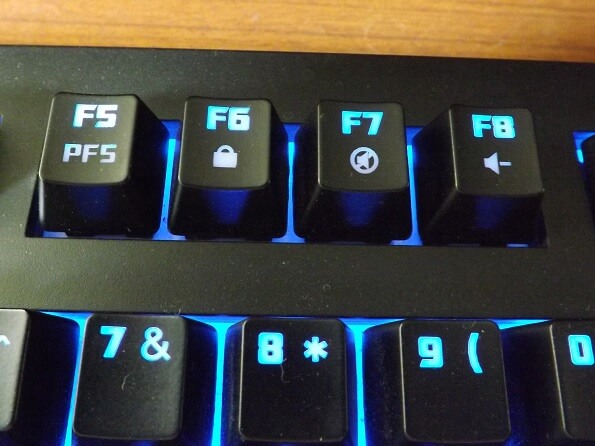 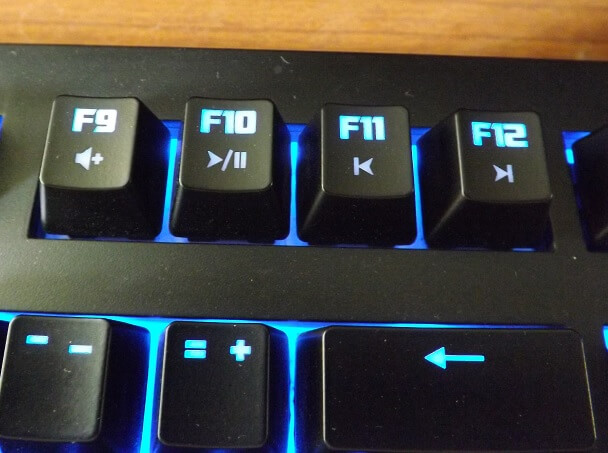 We also have some more functions on other keys as well. The up and down arrow key is used for the brightness of backlit, there are total of 4 different levels with 5th being them turned off. The left and right arrow keys are used to switch through lighting effects of the keyboard. Then we have the n-key/6-key rollover function on the “Ins” and “Del” key and instant Micro recording key on the “Home” button. The last function key if I’m right is the Pause key, which is used for switching between PC/Gaming mode. 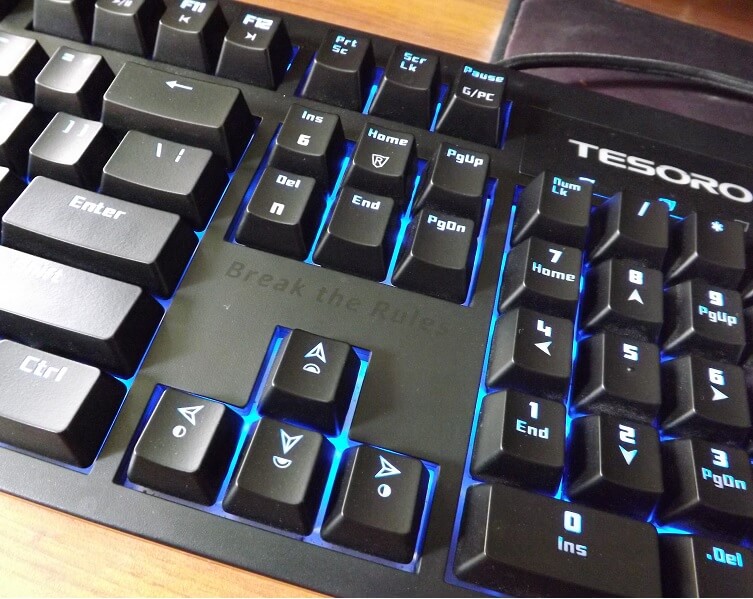 In the following video I take you through the different LED colors and backlit effects that the Exaclibur Spectrum offers. The audio in the video have some background noises that may make my words not understandable  so you might want to increase the volume by a little bit. Also I don’t usually do videos so do let me know your input on the video specially :) 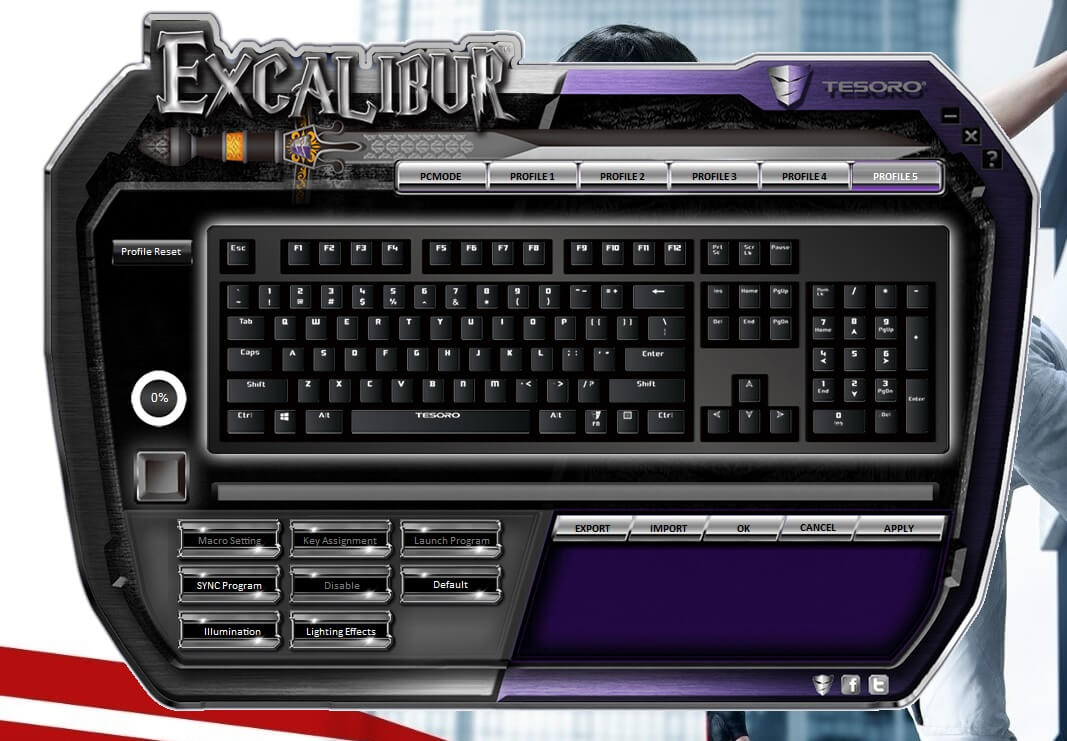 All the tweaking for the keyboards happens in the software that you can download from their website. The GUI for the software is very easy to use. The above picture is the home or default lander for the software. Below you can see the tabs that are grayed out as these options are for keys. Once you click on any key, they become available for changes. 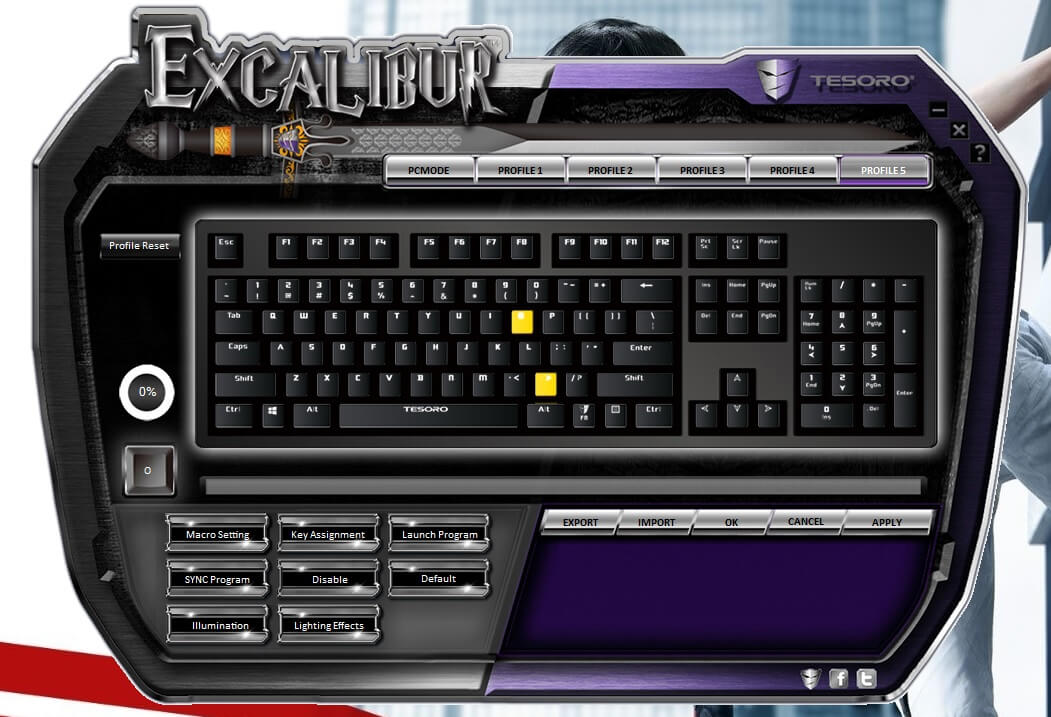 The macro setting tab is where you assign macro for your keys. You just select the key you want to set macro on, press record and record your macro, press stop and you are done. You can even set the delay between your inputs in the macro command. But that’s the casual way of doing that ;)

As mentioned above, Tesoro also have the instant macro recording key on their keyboard. You just need to press Fn+Home key, then press the key you want to set the macro on, then you press/record the combination of your macro and press Fn+Home once again and your macro is done. This option is really helpful when you want to record macros on the fly or in-game without the need of software. And don’t worry if you want to use the key you just set macro on as it’s default function; more over you don’t even need the help of software to make the key default. Just press the Fn+Home key, then the key you set the macro on and press the Fn+Home key again and it’s back to default. 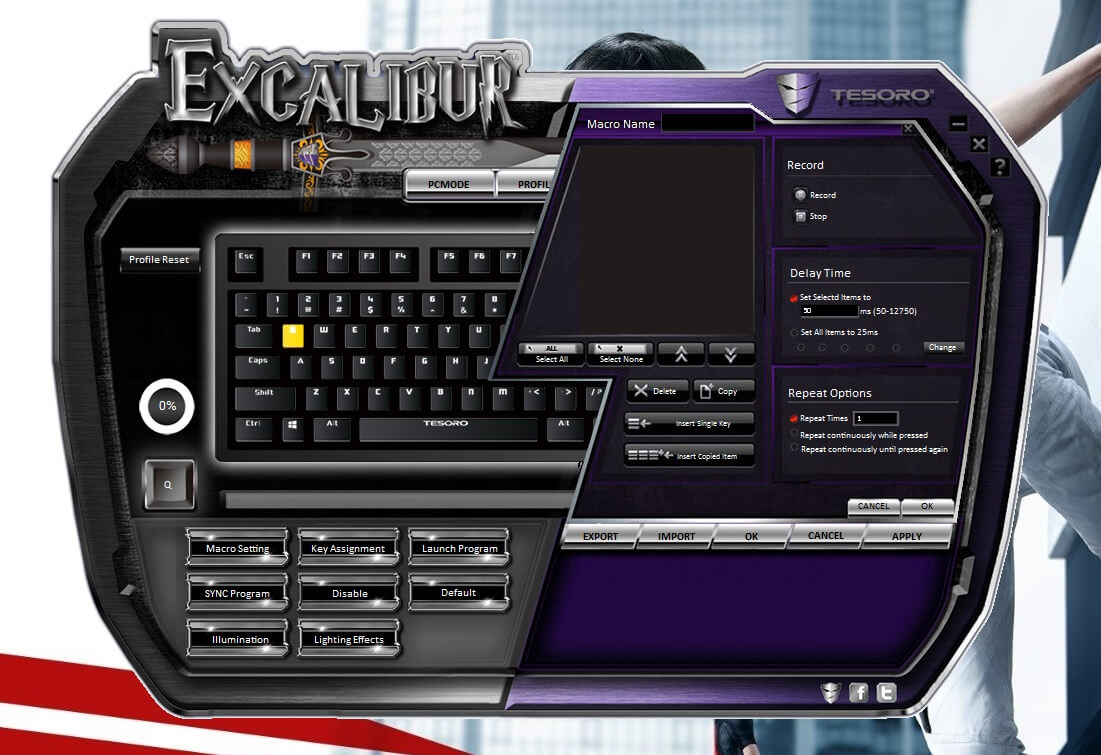 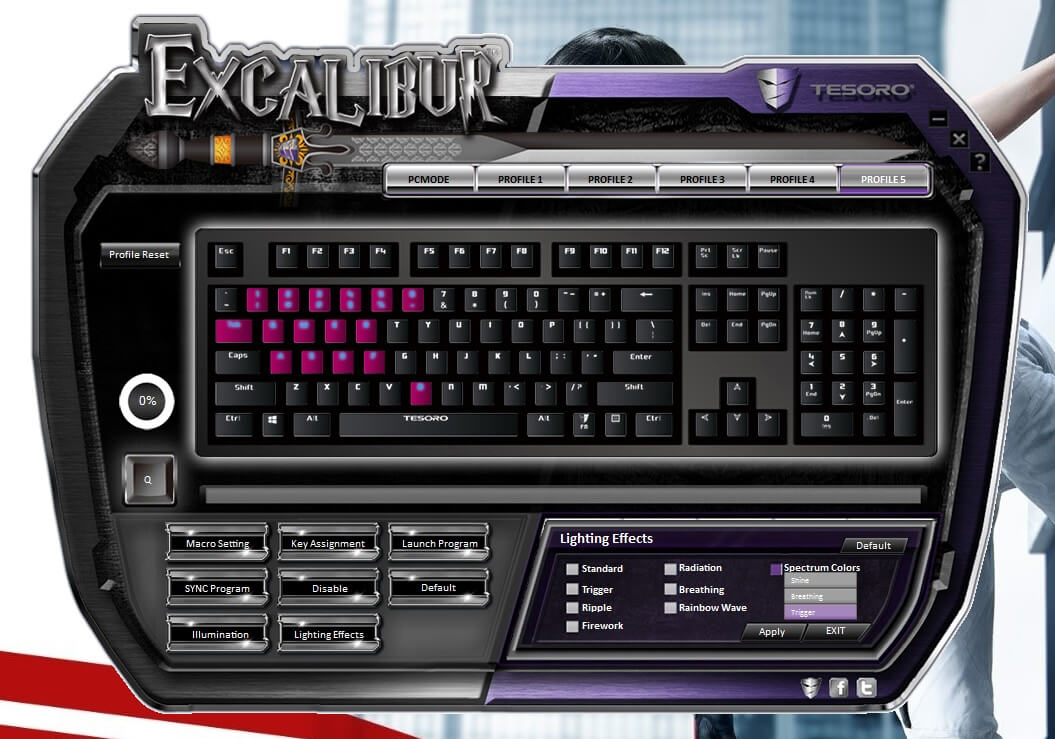 Then there’s this SYNC tab that I think is very useful as well. What it does is, the keyboard profile changes when you run the programs you’ve selected in the sync tab without the need of changing them manually. For example, I have my profile 5 illumination and lighting effect set for CSGO, now all I need to do is add the game’s .exe file in the SYNC tab and whenever I launch the game, my profile will change automatically to profile 5. 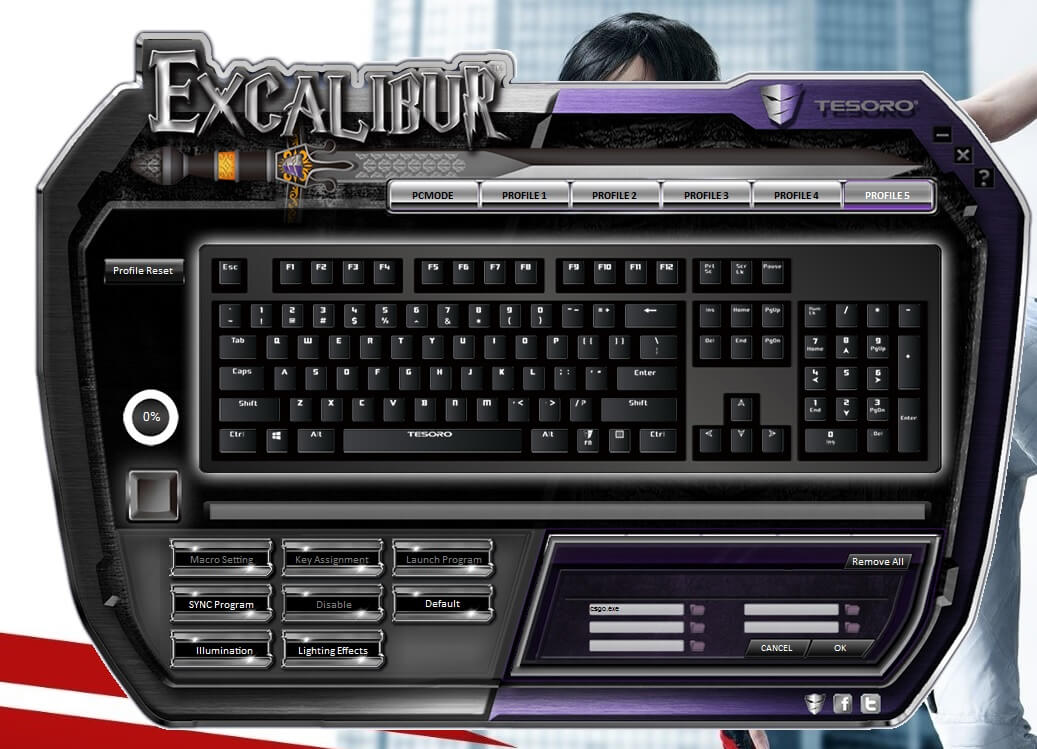 All and all, the software was easy to use for me, though it might be difficult for some as there’s no “help” button or manual that explains which tab does what or how to use it. Also there was one odd thing about the software, that whenever you are in any of the tabs, you can’t close, minimize or drag the software without exiting the tab first. Also the preset colors in the illumination tabs are a bit off. I’ve reported the issue to Tesoro and they said it will be solved with the new software they’ll be releasing soon :)

First lets talk about the switches, Tesoro offers the Excalibur Spectrum in Blue, Brown and Red switches so it’s up to you whichever switch you want in your Excalibur. The specific model I have as mentioned above comes with Red Khail switches which have a great feeling to them. After using the Excalibur Spectrum for like 3 weeks or so I feel like my typing speed has increased somewhat. The keys does make a slightly noticeable sound when pressed so you know when your key is registered, although you don’t need to press the key all they way down to register. Talking about the build quality, the keyboard has a very solid feel to it but not only the keyboard have a solid feel, but it’s heavy as well.

The lighting effects on the keyboard is very eye-catching as demonstrated in the video above in the article and I already have my favorite one, Rainbow Wave. But if you don’t like the rainbow wave effect, you also get the choice to set the backlit from 16.8 million selection of colors independently thanks to the per-key RGB LEDs.

There are some things that I didn’t liked or the keyboard should have had. First of all, the keyboard doesn’t have any cable routing/management options at the back, those can be very handy in certain situations. And secondly, yet lastly, there’s no USB or audio port on the keyboard. There are carving of the ports at the top right corner for the ports which suggests that the company might be planning to release a rev 2.0 soon or possibly the they were taken out of the design at the last moment. Whatever the case is, I feel like having those 2 features would have made the keyboard a perfect choice for people like gamers and office users. 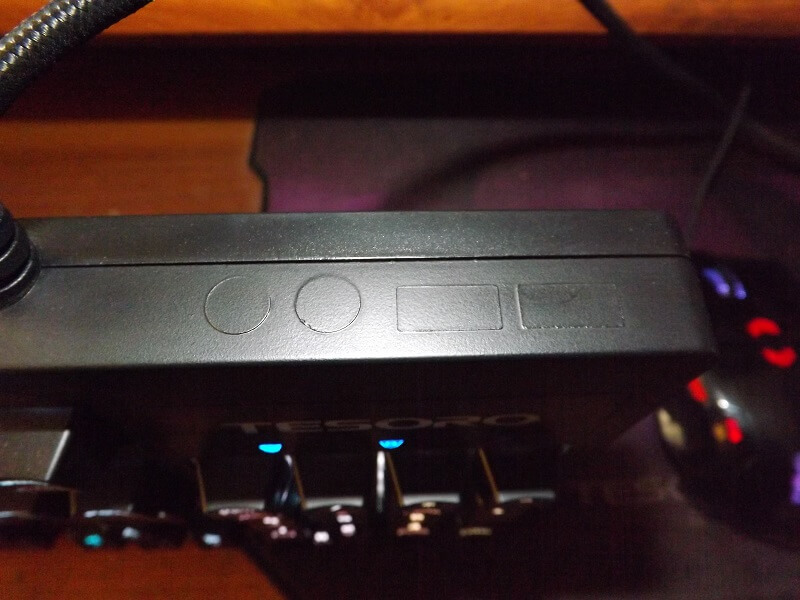 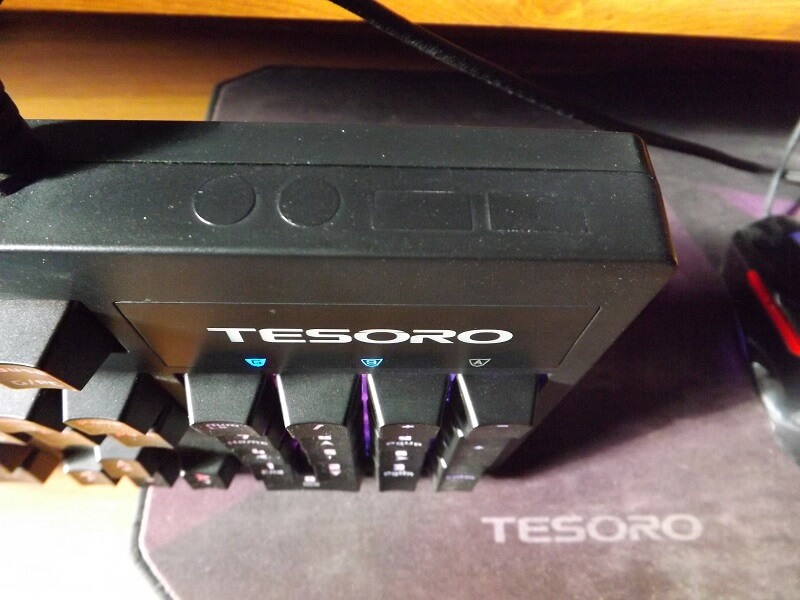 For a price tag of $123.97 I think Tesoro Exalibur spectrum with Red Khail switch is priced at the most comfortable zone for people looking for a simple yet feature rich mechanical keyboard that offers per-key RGB backlighting, multiple lighting effects, handy functions like multimedia and instant macro recording etc. If you are looking for a even more cheaper deal, than Tesoro also have the same keyboard in blue switched priced at $99.99 but if you want to go even lower on the price and still want all the features, just except the RGB lighting (they do have some backlit options though), then you can grab the same keyboard with your choice of mechanical switches for $89.99 from Amazon. But if you also want the USB/Audio ports on the keyboard, Excalibur might not be the one, but Tesoro do make other mechanical keyboards like Durandal, Colada, Lobera and Tizona that does have the USB ports along with some similar features of Excalibur Spectrum on them.

If we had a award system for reviewing products, I think I would have given it the Dragon Bloggers Silver award but since we don’t I’ll give the Tesoro Excalibur Spectrum 4.5/5 stars. The keyboard no doubt is perfect for both gaming and typing use but because of the lack of cable channeling and USB/Audio ports, I had to deduct 0.5 star.

Thanks a lot to Tesoro for proving us the Excalibur Spectrum for review.