So based on sales volume these are the top 10 Smart Watches over at Gearbest that range from $7.79 (yes, you can get a limited Smartwatch that cheap) to $139.99 for a higher end Android Smartwatch.  I will list them based on the highest end to the most budget friendly and remember Gearbest has free worldwide shipping which is something worth taking advantage of and you don’t need a Prime membership.  One thing to note is to pay attention to watch phones and the cellular networks and bandwidths that they support, check with your wireless carrier and make sure that the watch is compatible and will work with your wireless carrier’s network or you may not be able to use the independent phone functions with the SIM Card.

At the top of the category is the KingWear KW88 3G Smartwatch Phone and this actually is a phone watch in that it supports a 3G SIM card and can function completely independently from a phone for making and receiving calls. It also is a full Android device sporting Android 5.1 and a 1.39 inch Amoled screen. The MTK6580 Quad-Core processor with 512MB RAM and 4GB ROM is fairly robust for a smart watch. It also has GPS, Gravity Sensor, Sound Recorder, Calendar, and Pedometer features. The KingWear KW88 also has a camera on the side of the watch with 2MP resolution (5MP SW enhanced). The KingWear KW88 also comes in 4 colors (Black, Rose Gold, Red and White).

There is a reason why this is one of the number one best-selling Smartwatches on Gearbest, so check it out to learn more and see the video and they include images from the camera too on the store page.  Check out the KingWear K88 now over on Gearbest. 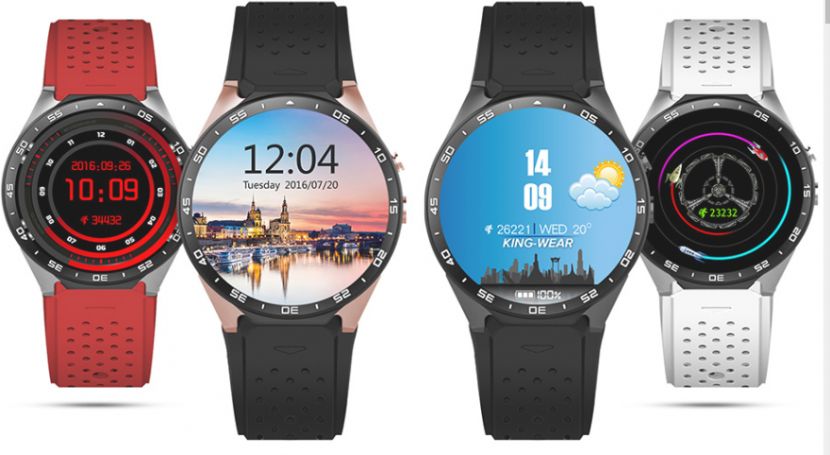 Next up is the FINOW X5 3G Smartwatch Phone which also is a full Android phone watch.   This model of watch however sports Android 4.4 instead of Android 5.1 and features a dual-core processor though has 512MB of RAM and 4GB ROM as does the KingWear KW88 listed above.  This smart watch doesn’t feature a built-in camera but connects to your phone via Bluetooth.  It does however, feature a leather strap instead of the silicone strap which tends to have a more elegant appearance and feel better on the wrist.  The FINOW X5 3G Smartwatch Phone has a 400×400 pixel resolution AMOLED screen and has a speaker and mic as well helping you offload some of your quick tasks from your phone to your watch or simply taking the place of your phone in some cases where you only want to carry your watch.

Check out more about the FINOW X5 3G Smartwatch Phone including video and more pictures over at Gearbest. 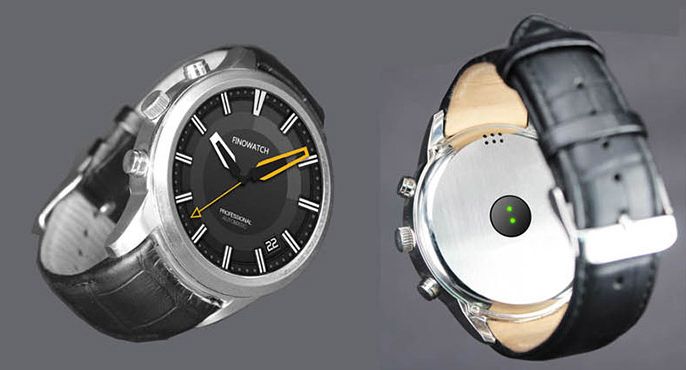 The Zeblaze Blitz 3G Smartwatch Phone also includes a camera in the side of the watch so you can take pictures or video as well. 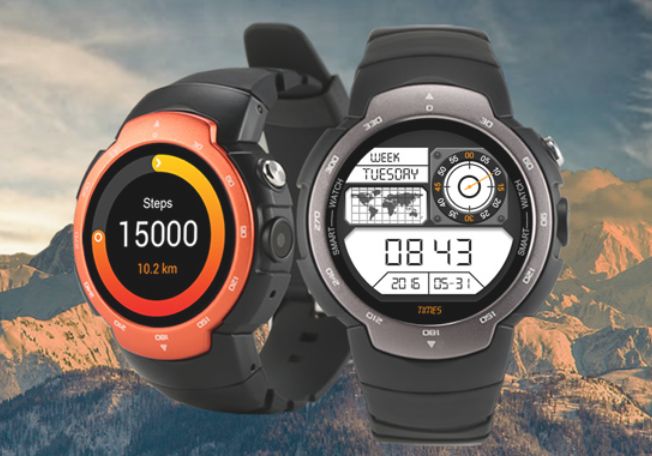 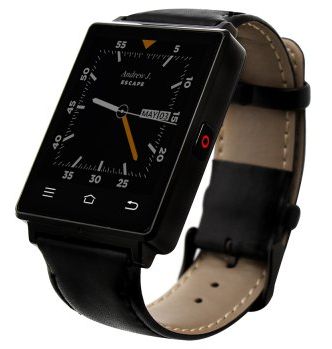 For those of you who prefer a rectangular screen instead of a round smartwatch you may consider the NO.1 D6 3G Smartwatch Phone.  This watch right now sports better specs and a better price on sale than the above-listed watches giving you 1GB of RAM, 8GB Storage with its quad-core processor.  You get Android 5.1, GPS and all the other features you would expect.  This watch has a 320×320 resolution screen.  You also get a Sapphire crystal display and this watch comes with FM Band Radio.

This watch has an incredible bang for the buck I have seen with its current price and has Wi-Fi, 3G, Bluetooth 4.0 and GSM.  The NO.1 D6 3G Smartwatch Phone comes in Black, Silver or Champagne Gold and includes a leather wrist strap as well instead of a silicone strap.  Right now it is discounted 61% off retail price on Gearbest.com so go ahead and pick one up.  This watch will work with your iPhone, Android phone or function as a stand-alone phone if you have a compatible wireless carrier network. 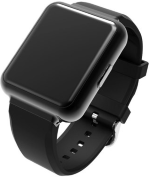 The FINOW Q1 3G Smartwatch Phone is another entry from FINOW that is a bit more budget friendly than the one higher up on the list.  This watch sports Android 5.1 and it does have a Quad-Core processor, 1GB of RAM and 8GB of ROM.  This watch supports Pedometer, Gravity Sensor, GPS, and also supports SIM card for 3G service acting as a phone.  The capacitive IPS screen is 1.54 inches and has a 320×320 resolution as well.  This watch also sports the Sapphire lens and has a magnetic suction charging interface so the charger pulls itself on without having to worry about plugging it in.  With the SIM suport you can answer the phone, send text messages, and more.  You also get real time message notification on the watch face showing you who is contacting you. 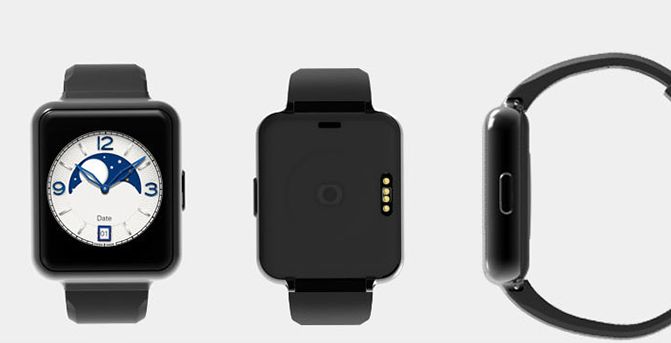 The Ourtime X01S 3G Smartwatch Phone is yet another Android 5.1 Smartwatch that has 1GB of RAM and 8GB ROM but has a Dual-Core instead of Quad-Core processor.  This watch also claims some water resistance (IP67), GPS, Gravity Sensor, Pedometer and has a 2MP camera in the watch.  It is a phone watch so supports some SIM cards and network frequencies as well.  This smart watch supports messaging, calendar, calculator, heart rate measurements and has a 1.54 inch IPS screen that is also 320×320 resolution.  This watch has a 600mAh battery which is slightly more than other smartwatches so may last longer between charges based on the higher battery capacity.  The Ourtime X01S 3G Smartwatch Phone comes in Silver, Golden or Black.

The Z80 Smartwatch which comes in Black sports a 2.5D Arc screen and is also a Quad-Core MTK6580 processor based smartwatch.  This ones has 512GB RAM, 4GB ROM and a 2MP camera as well.  You also get SIM Card support and Android 5.1.  This watch also has an IPS 320×320 1.54″ screen.  This watch lists more media formats than some of the others and claims to support Dynamic Heart Rate monitoring letting you add description, mood and share results of your heartrate  that moment.  You also get sleep monitoring and sedentary reminder so the Z80 boasts a lot of the benefits of a fitband and Android smartwatch hybrid.

Check out more features and video on the Z80 Smartwatch Gearbest product page! 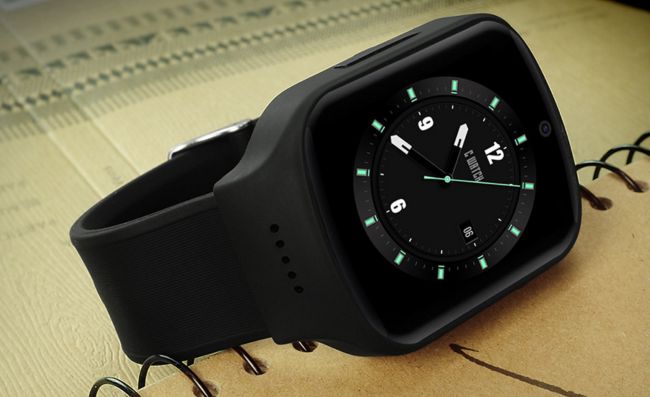 The GV18 Aplus Smart Watch Phone is one of the few watches that also lists NFC support. This budget friendly smartwatch can be had for just under $20 and supports a SIM card but limited network GSM frequencies. It has Bluetooth, a 1.54 inch TFT HD LCD screen with 240×240 pixel resolution and also supports a MicroSD Card slot for increased storage of up to 32GB. This watch supports mobile phone contact sync, and sleep monitoring as well as remote camera video recording. This watch sports a camera that is built into the top part of the watch rather than the side like most smartwatches (you can see in picture below). The GV18 Aplus Smart Watch Phone charges by plugging into a microUSB cable on the side. It isn’t a full Android watch but the fact you can get a phone watch for $19.99 during this sale is impressive if curious.

Check out the The GV18 Aplus Smart Watch Phone now over at Gearbest. 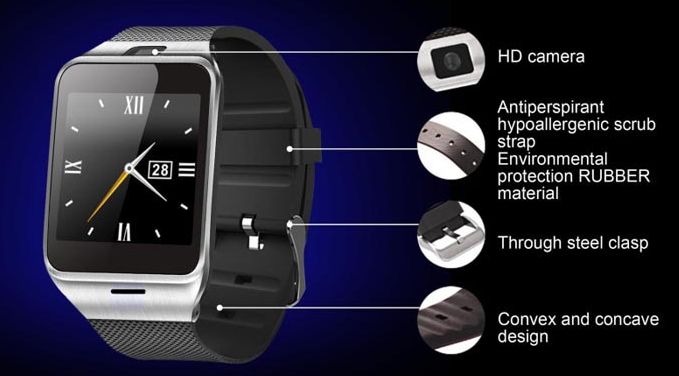 The DZ09D Single SIM Smart Watch Phone is the cheapest Smart watch phone I have ever seen as usually you don’t get a phone with SIM card suppoer for under $15. This watch comes in Silver, White, Golden or Black and has an MTK6261 CPU. The SIM card has only limited GSM network support however so this is something to check with your Wireless provider. The DZ09D Single SIM Smart Watch Phone sports a 1.54 inch TFT HD LCD at 240×240 pixel resolution as well. It has a camera but it is only .057MP which I figure why bother honestly. You get your usual features like sleep monitoring, pedometer, sedentary reminder, anti-lost, remote phone camera control, music playing and messaging. The DZ09D Single SIM Smart Watch Phone claims to support 180 hours of standby time and up to 5 hours of constant use talk time and it also has a voice recorder and mic built in. This watch supports up to a 32GB MicroSD Card to and at less than $15 may be the most bang for the buck smartwatch to test out.

Check out the DZ09D Single SIM Smart Watch Phone over at Gearbest as well. 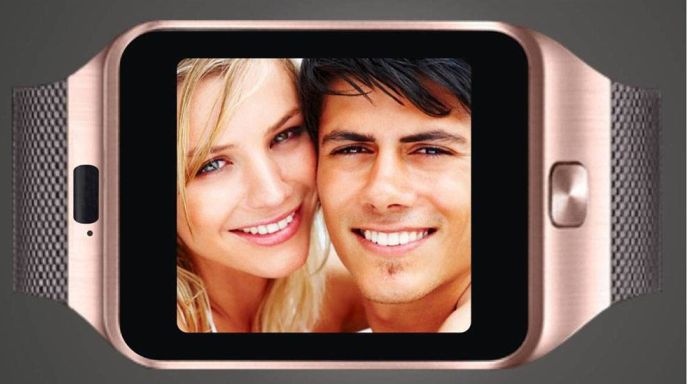 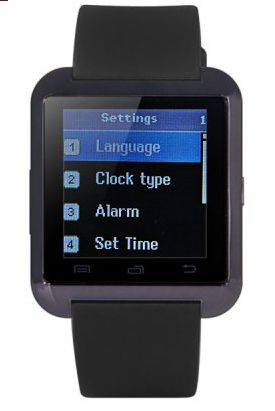 The Uwatch U8 Smartwatch rounds out the top 10 and these watches sell like hotcakes due to the fact they are under $10 over at Gearbest.  The Uwatch U8 comes in Black, Red or White.  The U8 is a Bluetooth Smartwatch that does not act as a stand-alone phone, it does require pairing with your phone if you want to sync data, and get more functionality out of it.  It is not a full Android OS and has limited functions and it does have a rather unimpressive screen but is touch sensitive.  Iggy did a review of the U8 Smartwatch which is among the most popular posts here at DragonBlogger that you can read more about this watch and see some video of it in depth.  Now when Iggy reviewed this watch it was over $30 at the time but now it is under $8 which makes it more compelling if on a budget and want to sample a smartwatch with more functionality than  fitband that costs less than a fitband.

Pick up the UWatch U8 Smartwatch Now!