I mentioned to my readers that after a 21 hour plane trip to Italy back in July I realized that I needed to have an external battery to help keep my portable devices alive.  The iPad 2 is fantastic but even it’s battery life can’t hold up when watching movies or playing games for that long of a plane trip.

I wanted a powerful battery back that was small, portable, reasonably light weight and could charge just about anything I carried with me. 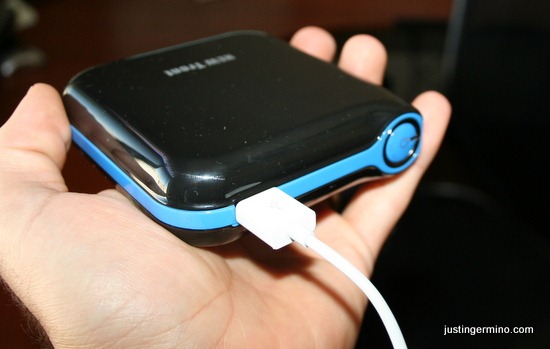 I found just what I was looking for with the New Trent iCruiser IMP1000 which is an 11000mAh external backup battery for USB devices.

First of all, I read some complaints about it being heavy and bulky on Amazon.com but the device really isn’t.  Consider that it holds 6x the iPhone 4’s battery life and it can charge an iPad 2 from 25% to 100% and then some, it is really light weight and about the weight of a camcorder battery in a flatter box like case.

It fits in a carry case, it isn’t designed to be in your pocket but drops right in your existing iPad or Laptop carry case just fine.

I tested the New Trent iCruiser IMP1000 with a Blackberry Bold, Two iPad 2 devices and a Samsung Galaxy phone and it charged both of the smart phones from last bar in the red to full charge in about one hour per phone. 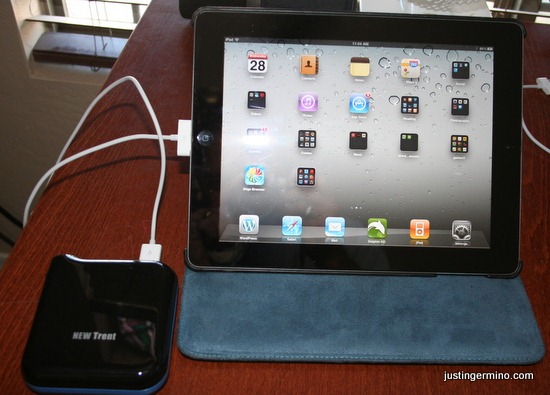 For the iPad 2 I let my battery drain down to 30% and then plugged it into the fully charged IMP1000 and in less than 2 hours my iPad 2 was at 100% battery life and the New Trent device still showed 1 glowing blue dot of power left. 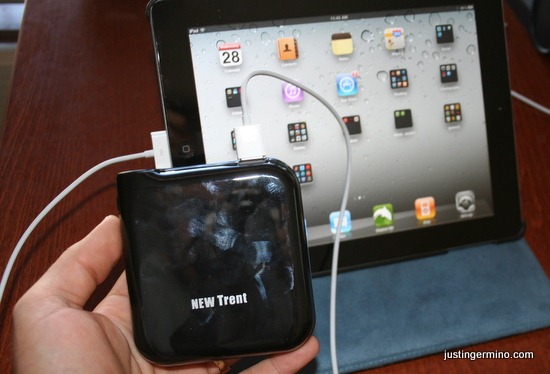 (Fingerprints do smudge pretty easily on the shiny black surface though!)

The New Trent iCruiser IMP1000 has 3 blue led indicators on the power button showing you how much power it has left, 3 dots means fully charged and you can gauge if you need to charge it again.  With this device you can extend the battery life of your mobile devices for hours and hours without having to worry about finding a AC outlet. 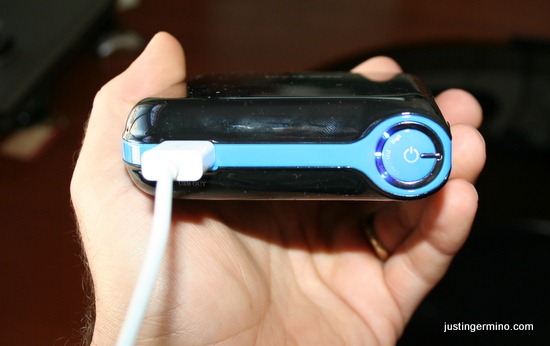 The product claims it stores enough power to recharge an iPhone 4 six times over on the same charge.  I didn’t test 6 charges on the same smart phone but I have no reason to doubt this claim.

Overall, the product is great but I would have liked to seen 2 USB plugs and be able to charge a tablet and a smartphone at the same time or perhaps 2 tablets at the same time as I have 2 iPad’s in my household.  The IMP50D which has 5000mAh does support 2 USB devices but doesn’t hold as much a charge as the IMP1000 so the dual USB output would have been perfect for this device.

Still, I have seen external USB chargers at more than $100 and you can’t go wrong with the New Trent iCruiser IMP1000 which is $76.95 on Amazon.com right now!

Who has had their tablet or smartphone run out of power at an inconvenient time and wish they could have had an external backup battery?