And the Draconem RGB Cloth Edition is the subject for today. Tt eSPORTS have made some changed to the design compared to the hard edition. The Logo has moved to the top left rather than bottom left. The controller part of the mousepad has also been given a sleeker look. However, the basic concept remains same. So, let’s dive right into the unboxing of the mousepad after taking a look at what Tt eSPORTS think about this product:

Bringing stunning RGB color to the DRACONEM family, our DRACONEM RGB Cloth Edition lights up your gaming environment and gets you into competitive sync for the challenges that lie ahead on the battlefield. With a gorgeous spectrum of visual effects and lighting profiles, the DRACONEM RGB implements a specially optimized cloth surface that unlocks refined accuracy and supreme precision aim. Through easy to access hardware & software controls you can adjust lighting effects without hassle – and get the style you’re looking for in a matter of seconds. Arm yourself for battle and let the DRACONEM RGB add a splash of personalized color to your gaming setup. 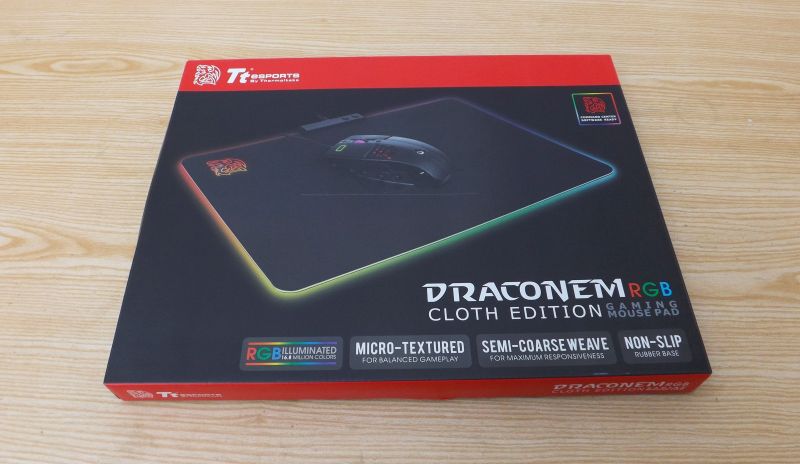 So we get the Tt eSPORTS Draconem RGB Cloth Edition gaming mousepad in a red/black theme flat rectangular cardboard box. On the front we have a picture of the mousepad with LEDs enabled along with a picture of Tt eSPORTS Level 10M Advanced that we reviewed in the past as well. Then we have the name at the bottom followed by some features. And at the top, we have the brand logo. 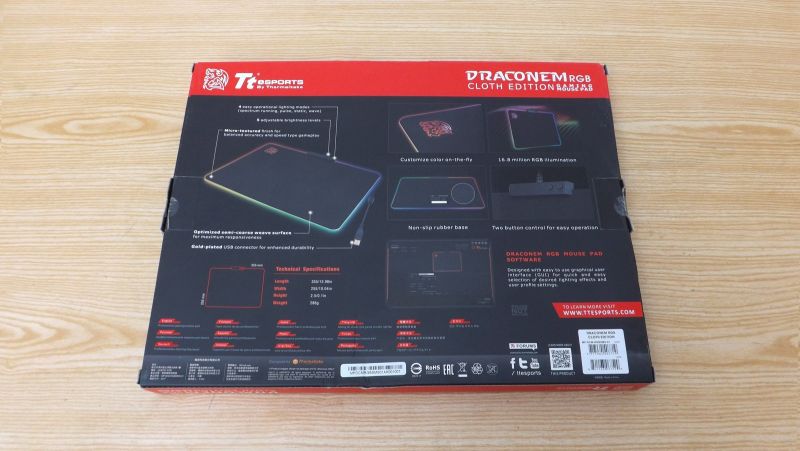 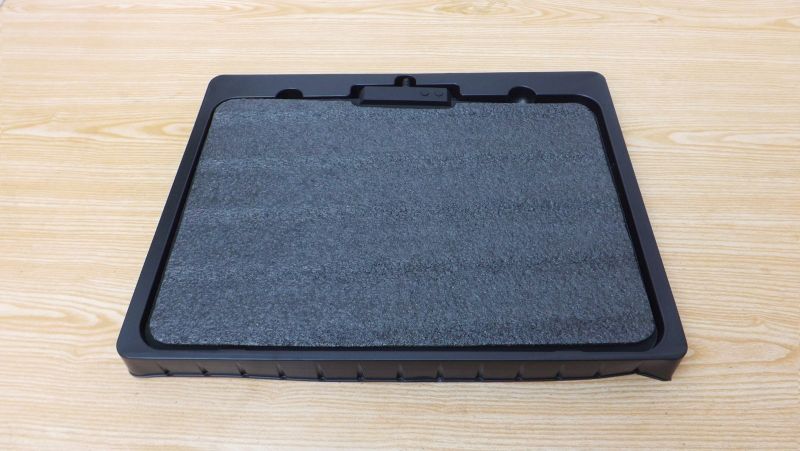 Once you remove the box, this is what you’ll find. The mousepad, held in a plastic housing, protected by a thin foam. 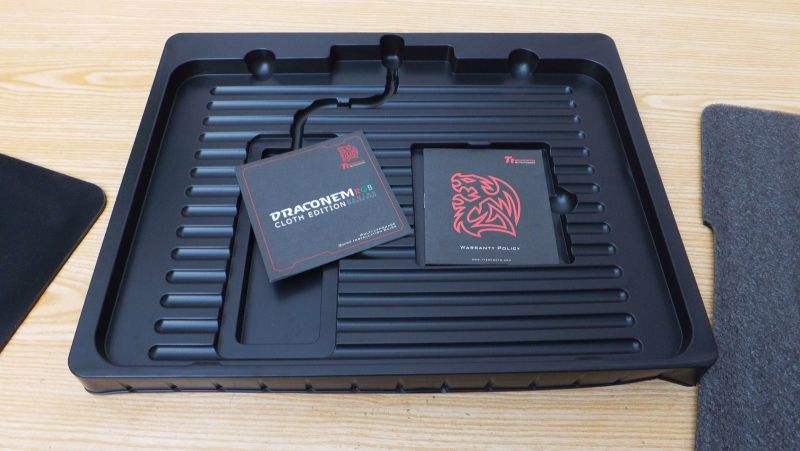 After removing the foam and the mousepad, you’ll be greeted with a user manual and a warrenty policy booklet.

So this is what the mousepad looks like out of the box. As mentioned above, the Tt eSPORTS logo has been shifted to the top left corner compared to the bottom left corner. I think Tt eSPORTS did that so the Logo remains visible all the time as it’s not often that you’ll end up bringing your mouse to that corner. Whereas covering the logo on the bottom right corner have higher chances. The surface once again is a cloth surface and doesn’t have that hard texture. The edged are also curved. 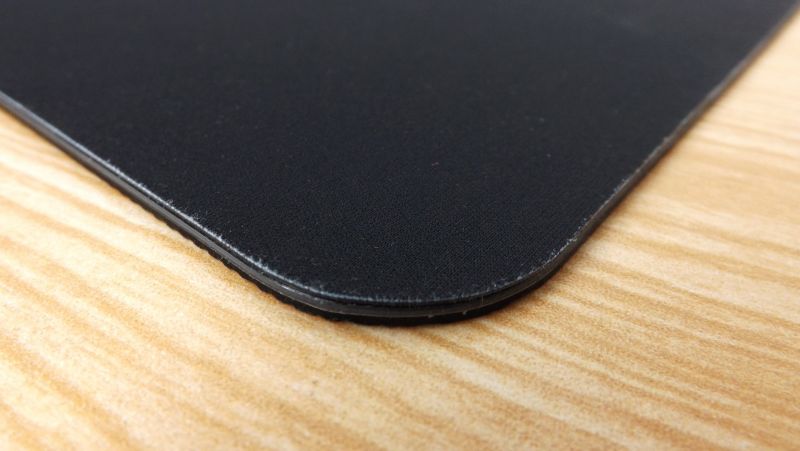 The finish on the border doesn’t seem to be perfect as it looks as if the cloth surface was glued to the surface/layer below. And there are also very small white threads coming out of the edges. The middle layer is the one that glows in RGB, it’s not like the whole mousepad, including the surface, is glowing in RGB, that would be awesome though. And the last layer is at the bottom which features a rubber surface so the mousepad doesn’t slide away. 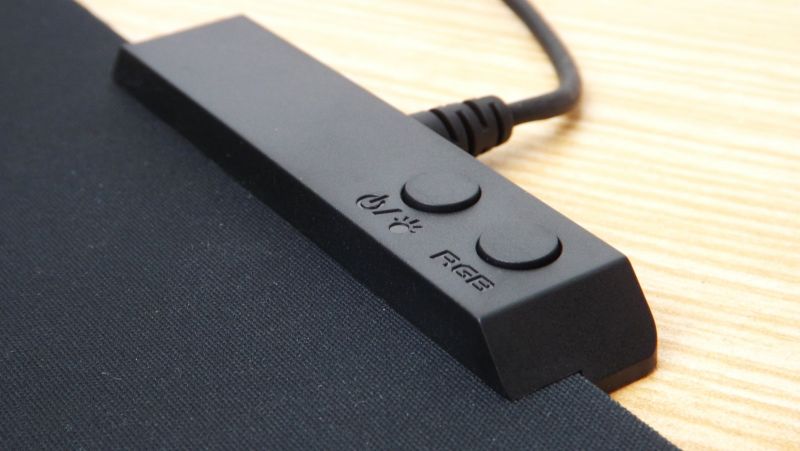 The new control panel on the mousepad looks a lot better than the one on the hard surface. It’s been given a sleeker look with two buttons on the right side. On button is for powering on and off the LEDs while the other button is for cycling through the different LED effects. 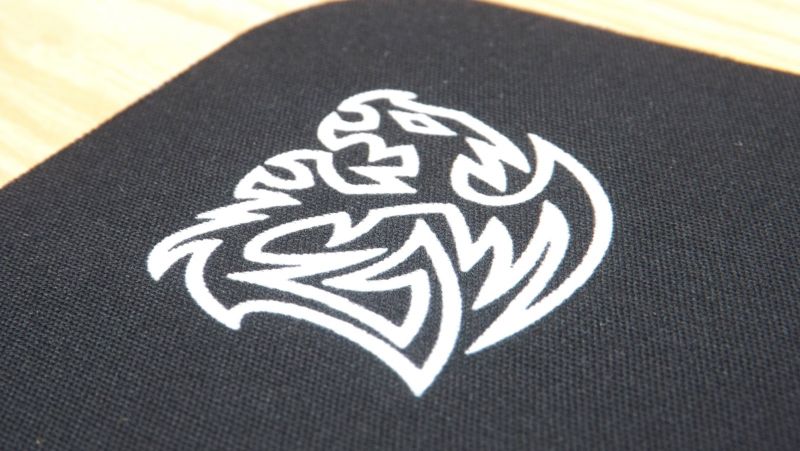 Here’s a close-up shot of the Tt eSPORTS logo on the mousepad. The logo itself is in white color, however, it also features RGB LEDs. 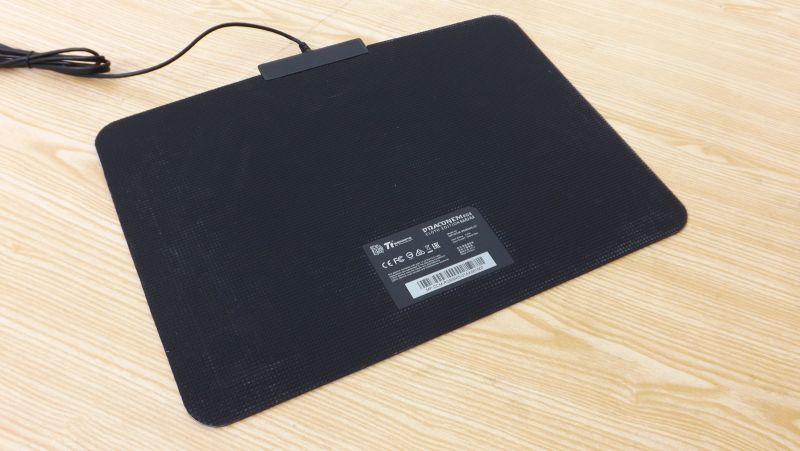 And here’s a look at the back of the mousepad. It wasn’t that dusty out of the box. That’s the dust from my table (yea, dust settles within seconds here). And since the back features a dotted pattern and is also using rubber for material, cleaning that dust was really easy. Well, there’s an information sticker on the bottom here. And yeah, there’s rubber on the back so that’s a whole lot of grip right there.

Build Quality:
The build quality of the mousepad it not perfect. There are some aspects of the mousepad that could be better. First, the edges as shown in the picture above, they could’ve been better. In the condition it was shipped, it seemed as if there’s going to be a lot of wear and tear pretty soon, however that hasn’t happened so far. But still, a neater border would have been better.

Secondly, the logo on the mousepad could have been done better as well. Since the logo is painted in white, the LEDs below are dimmed. And the result of this also impacts the overall LED effects. With brighter edged and dimmed logo on front, the effect doesn’t look like it should.

As for the material, the whole mousepad, you might have guessed, isn’t made out of cloth. Instead, it’s made up of three different layers (as far as I know) with cloth being on top. The mousepad is flexible, however not to an extent that you can roll it into a cylinder. But it still has that soft feeling of a cloth mousepad.

User Experience and Conclusion:
I’ve been using the mousepad for about 2 months now, and performance-wise, I’m very happy with the Draconem RGB Cloth edition. Even though it’s not a fully cloth-made mousepad, it still features the same soft feeling of a cloth mousepad. During the time of testing this mousepad, I was using the Tt eSPORTS Nemesis Switch with Teflon skates, which we also reviewed recently. The mouse glides through the surface very easily and smoothly. So, if you’re moving from a cloth surface to this mousepad, the transition should be very easy and you wouldn’t notice much difference. And I even found that the surface felt a lot smoother compared to an old cloth mouse surface.

Then there’s also the dampened LED brightness of the logo which doesn’t look good if you compare it with the brightness of edges on the same mousepad. And your eyes will surely catch that difference once it lights up.

So all and all, Tt eSPORTS seems to have improved on a major issue that was the button control panel, however, there’s still room in the aesthetic department before they can take this product to perfection. I’m very happy with the traction and the smoothness of the surface, however, this mousepad isn’t marketed with just that in mind. So, keeping all that in mind, and considering the fact that this mousepad has an MSRP of $39.99, I would like to rate this mousepad 3.5 out of 5 stars.