Now let’s get back to today’s topic, which is the Tt eSPORT Ventus X RGB. Ventus X RGB is another addition to the Tt eSPORTS Ventus line up and an upgrade to the original Ventus X. Hence the name includes RGB in it so that you don’t confuse it with the none-RGB variant.

The Ventus X RGB even though looks the same as the original Ventus X, actually are the same from outside, there is a major difference. Whereas the Ventus X had a Laser sensor of 5700DPI, the Ventus X RGB features an optical sensor of up to 12000 DPI. And also as the name suggests, the mouse is now equipped with RGB LEDs instead of the RED LED. 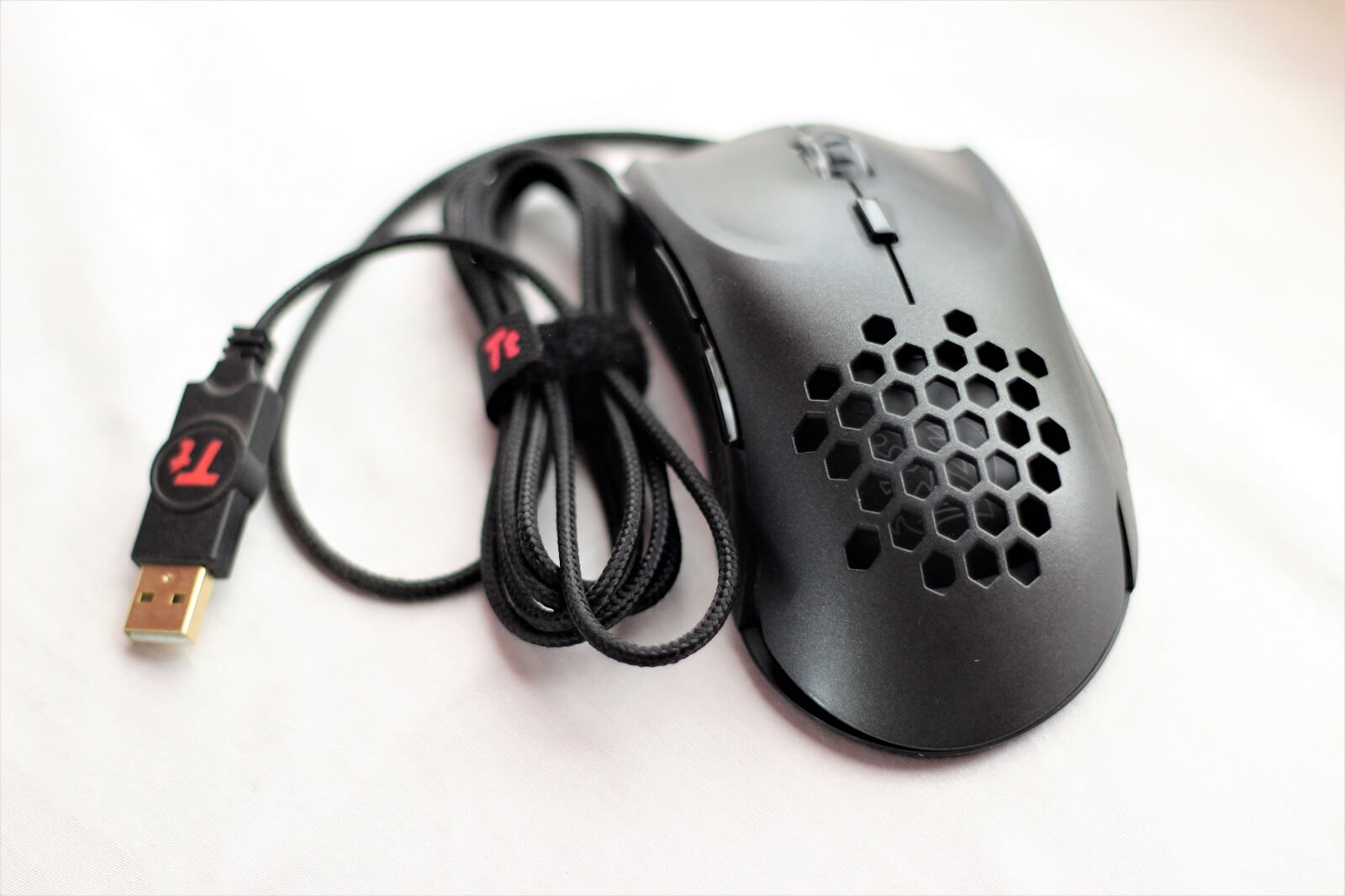 If you do not want to check the video embedded above, here’s a few pics just so you know how the mouse looks like. In the above picture, you can see that the top of the Ventus X RGB features the same honey comb or hive design as seen on their other mice and the whole body is matte coated.  And beneath the hive is a Tt eSPORTS logo that also illuminates. Also there’s an extra button on the top and 2 on the left side; in total there are 3 extra buttons on the Ventus X RGB. Also the cable is braided which I’ll go with any day over the rubber cables. The connector is a USB 2.0 gold plated and also there’s a Tt Logo on the side. The cable also features a in-line velcro strap so there’s also cable management issue. 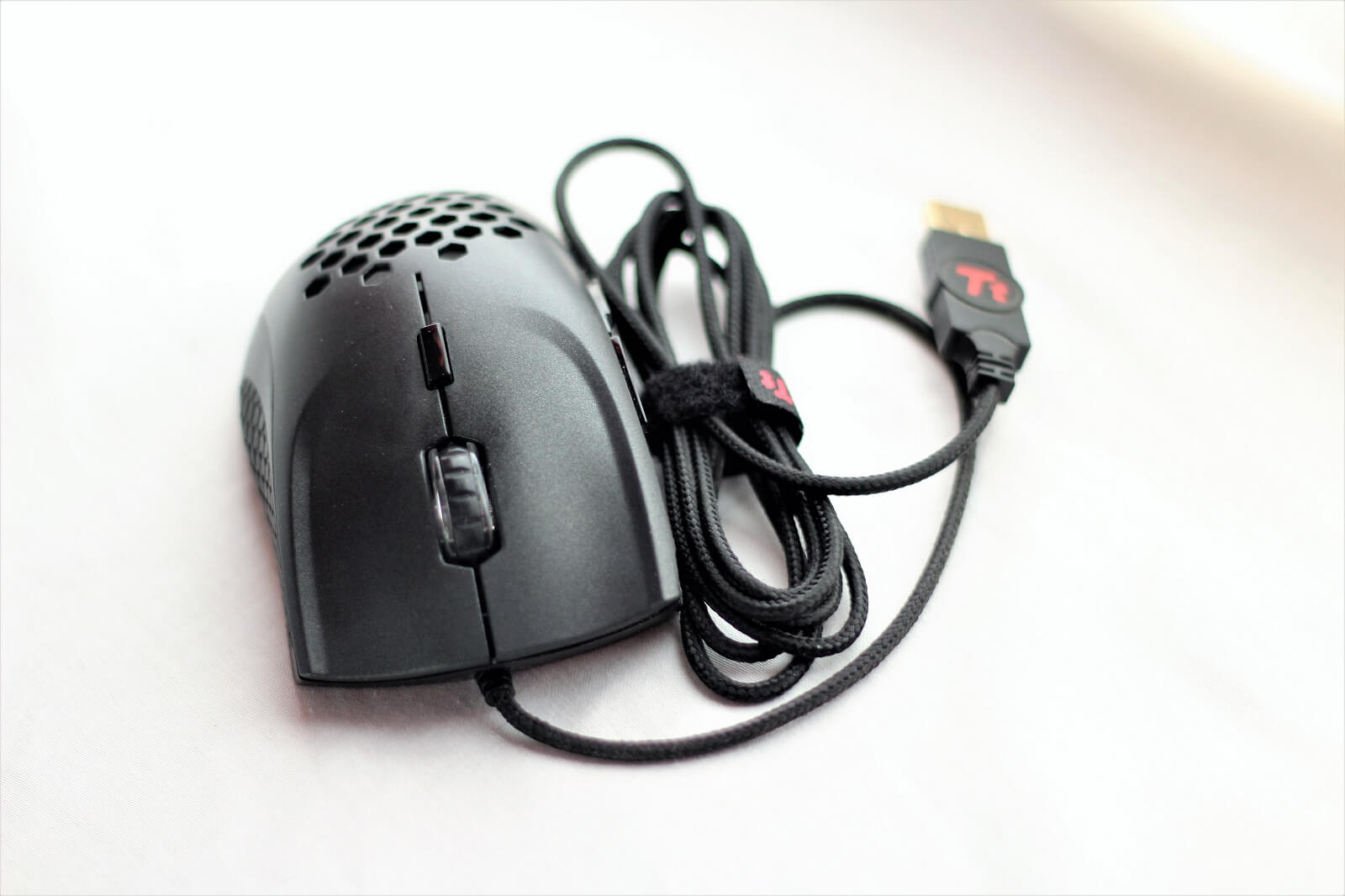 Here is a better look at the top from front. from here you can see the scroll wheel which is transparent from sides but has rubber in between to make it more comfortable during scrolling. Also the whole area from top to the almost back of the extra button on top is sensitive, as in your clicks will register anywhere in that area. 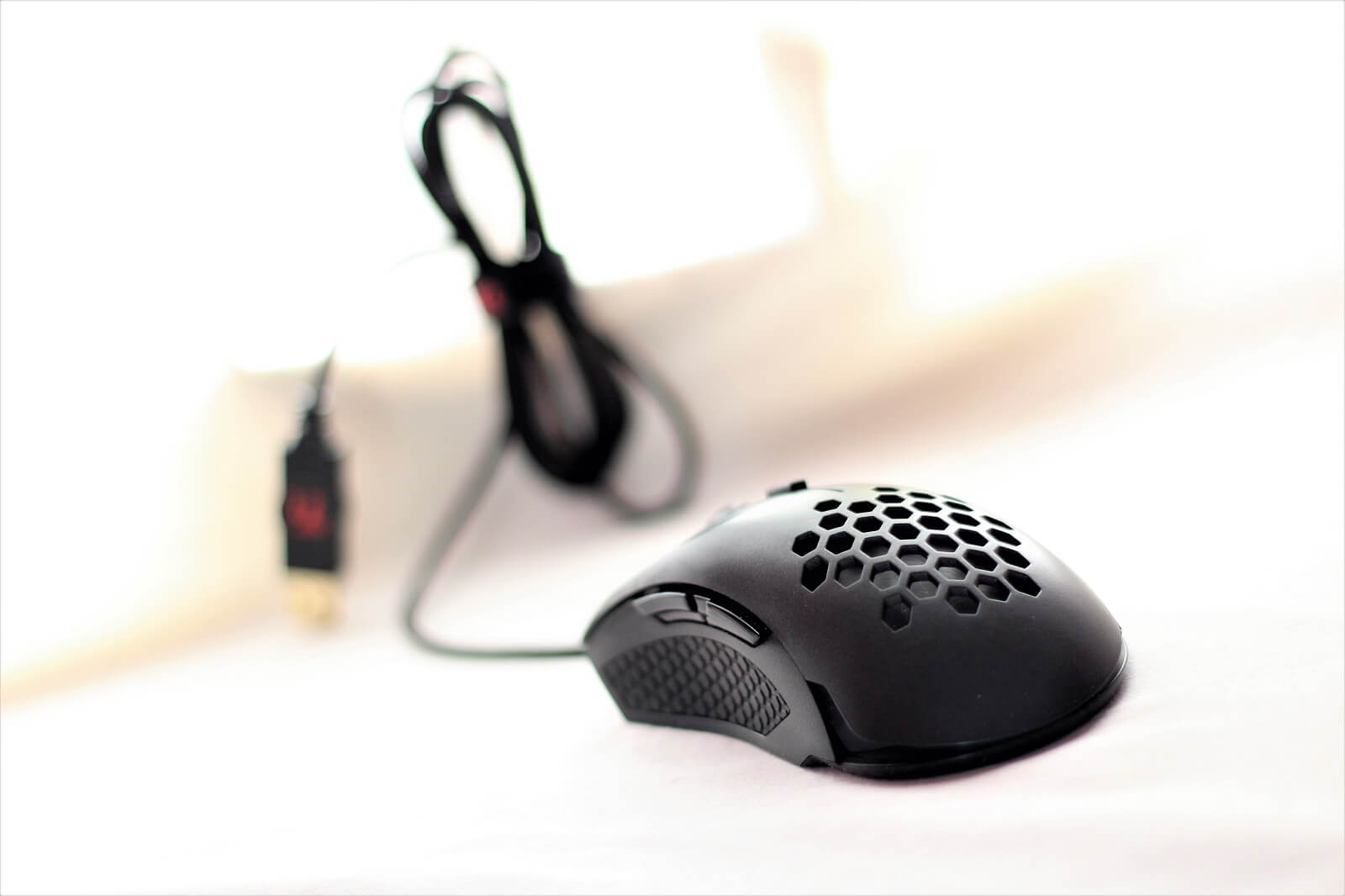 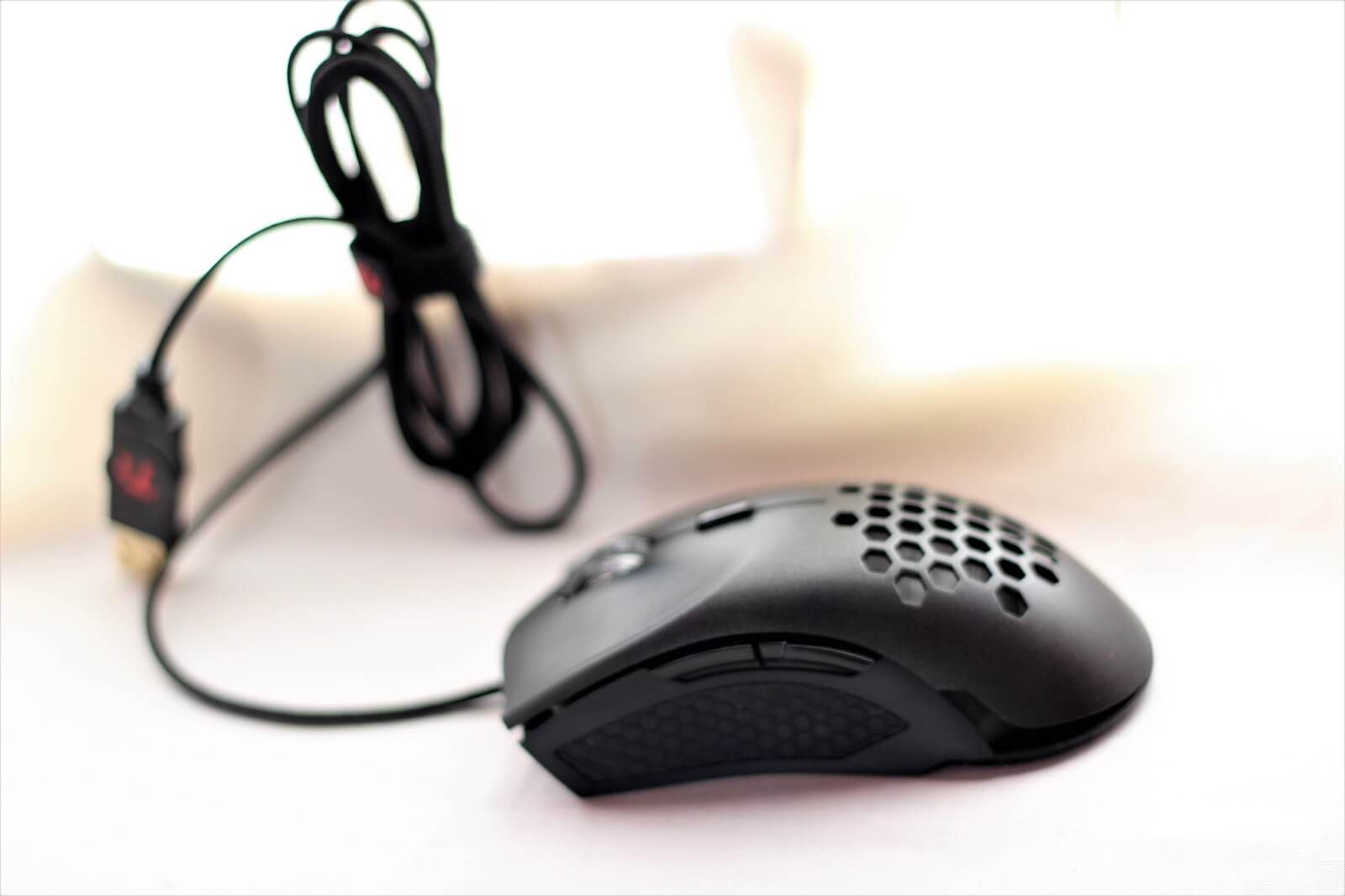 In this picture, you can see that the left side of the mouse features a rubber surface with hive design. This makes the grip on the mouse a lot better with thumb being very still over it. 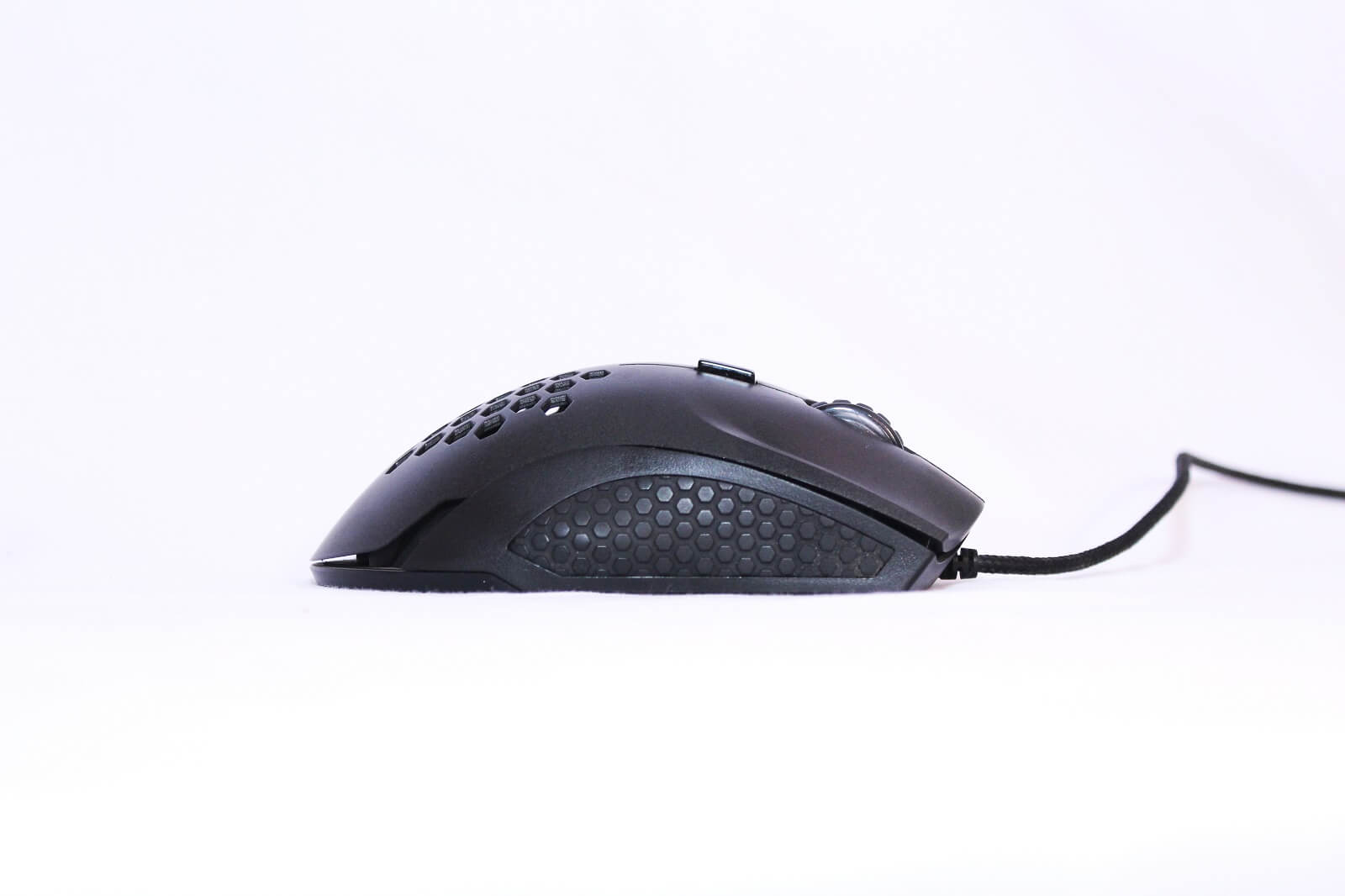 And just like the left side, the right side also features rubber surface with hive design for the ring and pinky finger. Compared to a solid left and right side, these surface do much more better when it comes to comfort-ability and grip.

I’ve been using the Ventus X RGB mouse for about more than 2 weeks, and I’ve got no complains about the mouse or the PIXART PMW-3360 optical sensor. I’ve played various kinds of games, from FPS to TPS to RTS and I didn’t have any issues with the movement, and the feedback was very good and accurate. I’ve used the mouse on both cloth mousepad and hard surface of the Tt eSPORTS Draconem RGB mousepad, and there were no issues with either of the surface. Also, the mouse glides very well on either surfaces, but there’s little hissing noise produced when it’s on a hard surface. Personally, I like cloth surface over the hard surface because of the soft and sensitive feeling it has, and I’m very happy with the combination of my cloth surface and Ventus X RGB.

The Ventus X RGB is using the 20-million life cycle Omron switches like most of their mice right now. The click registration area is pretty wide, from the top of the mouse till the extra button on the top under the scroll wheel. Also, I don’t remember having any double clicks or any click registration issues on either the RMB or LMB or the extra buttons. So, the Omron switches are performing well so far.

The scroll wheel is well balanced, doesn’t require too much force to scroll and also have a clicky feeling for the feedback. And it also have a sturdy feeling, which makes me feel like it’s going to last very long. 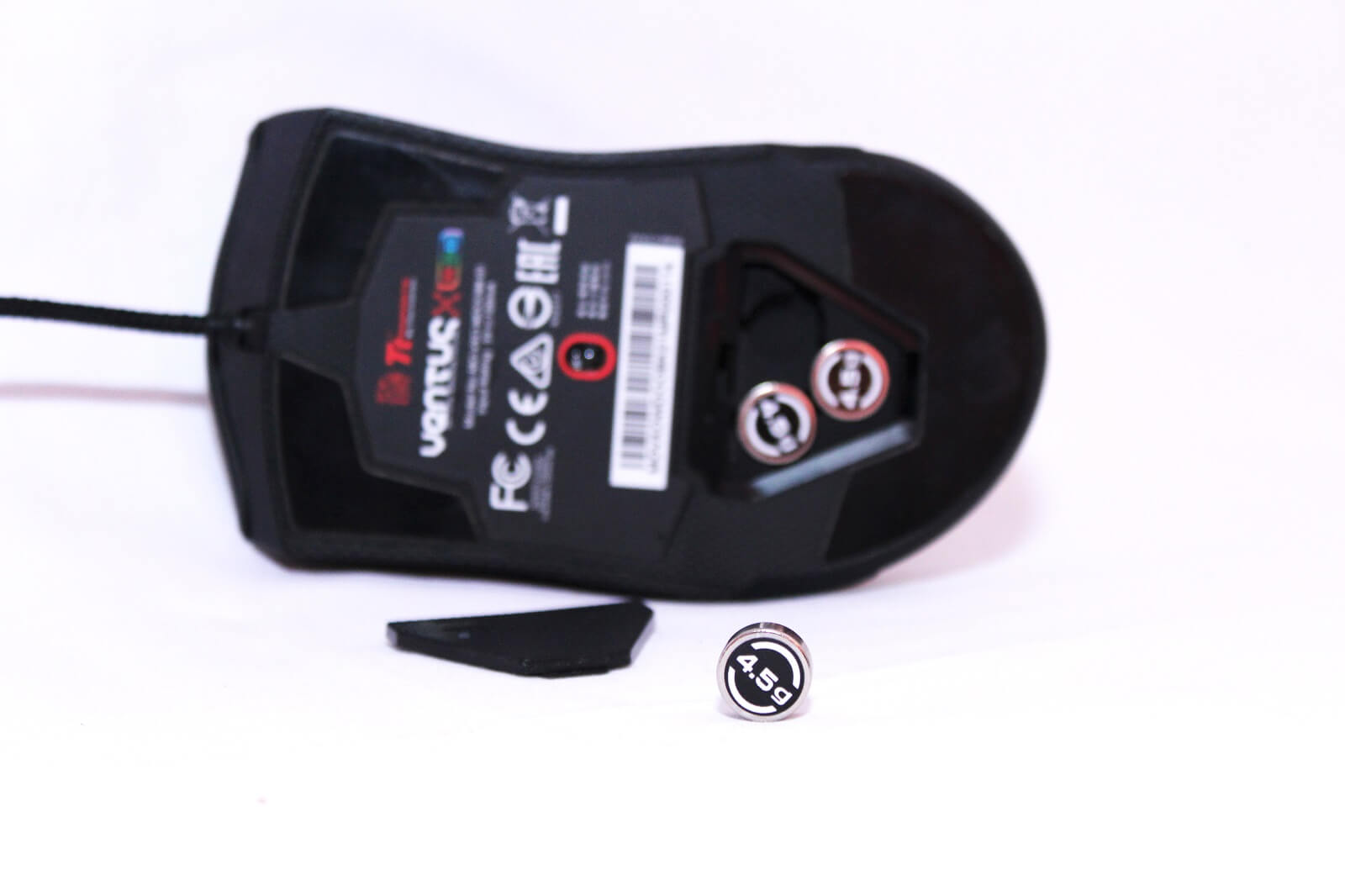 Tt eSPORTS Ventus X RGB also features a weight system as demonstrated in the unboxing video. The Ventus X RGB weighs about 144 grams with the weights installed. There are 3 weights each equals to 4.5 grams so you can customize the weight of the mouse by about 14.5 grams. But in my hand, it feels like the default weight with all of the weights installed in the mouse is the best. But that much weight can strain your hand only after a few hours, so if you feel like it, make sure to take out some weights out of the mouse. Well, that’s why they are there in the first place.

The Ventus X RGB comes with an accompanying software. Tt eSPORTS is using the same universal software for the Ventus X RGB. So, not much has changed. 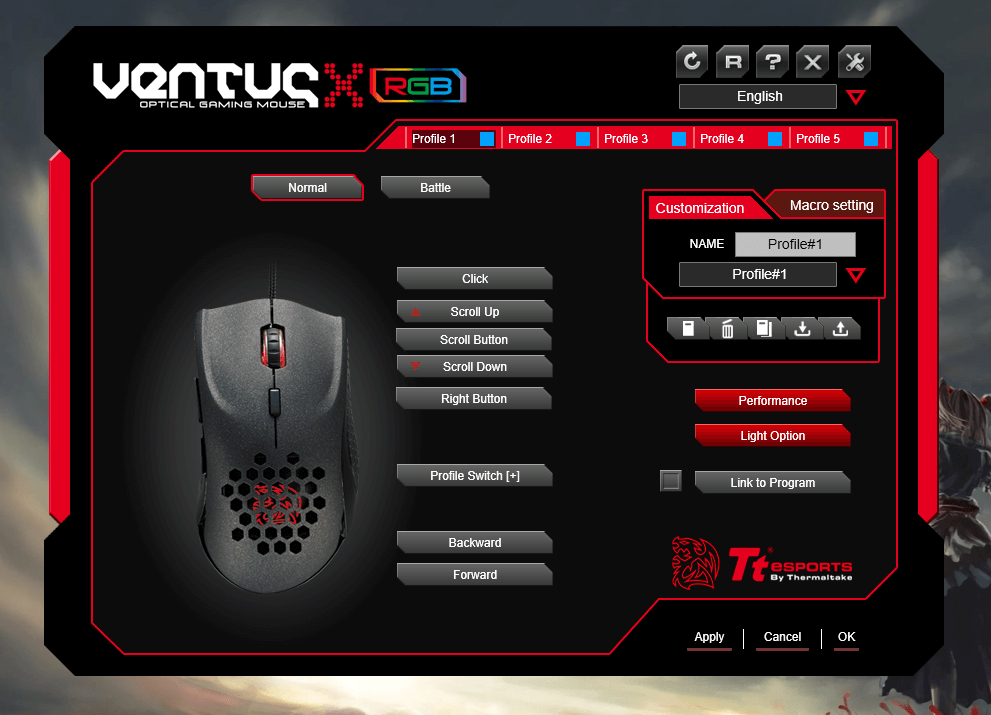 Once you install the application, the application will update your firmware if it’s old. Your mouse may stop working while the firmware Is updating so don’t worry over that. Once you’re done, you’ll be in the above screen. From there, you can change the button functions, access different tabs, different profiles, save, import, export and delete profiles and link programs. 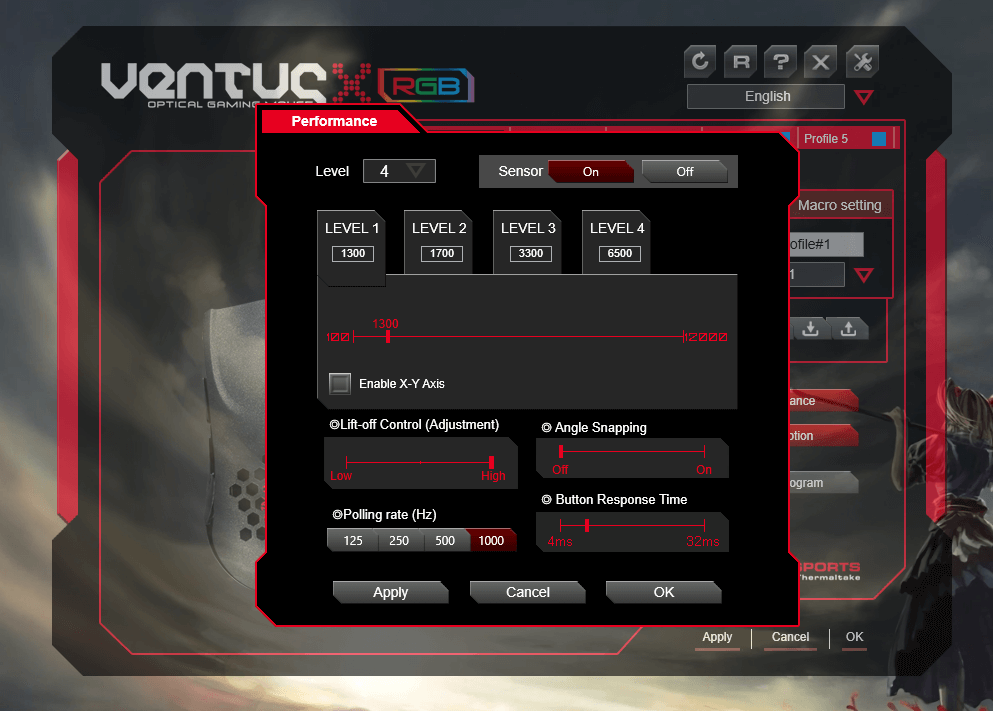 In the performance tab, you can customize your mouse sensor. You can select up to 5 different DPI levels and have different DPIs on each. You can also adjust the lift-off control, angle snapping, polling rate and button response time from here. 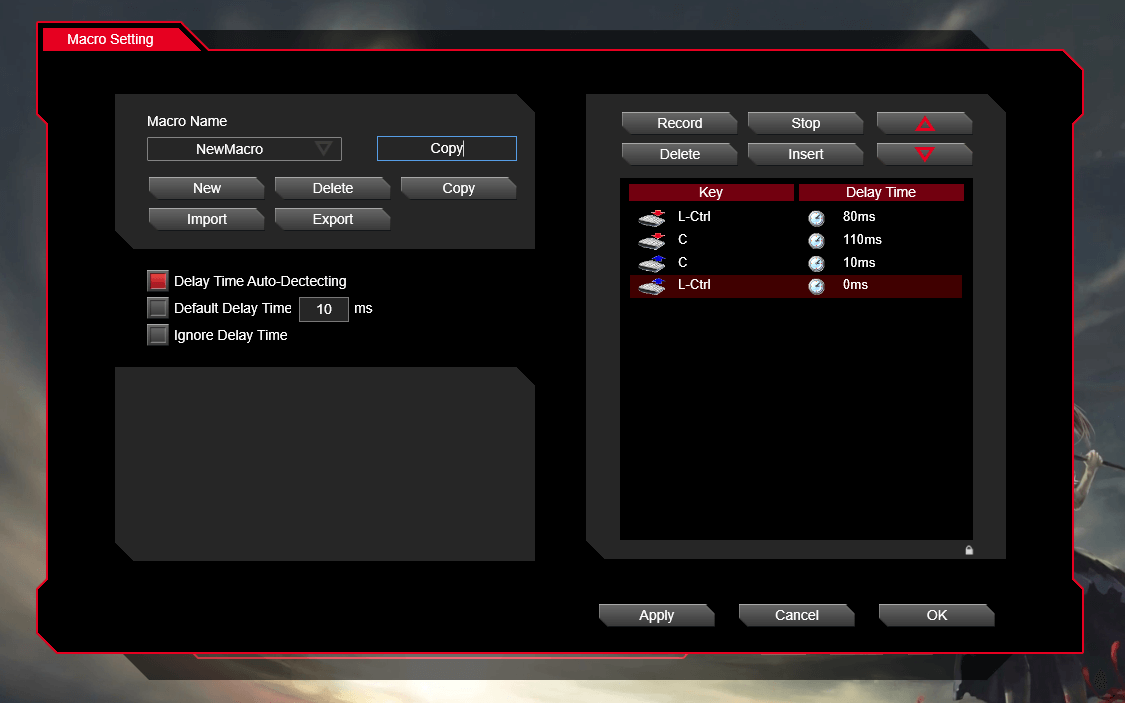 Just beside the customization, there’s a macro tab. From here you can create macros. Creating macros is really easy with the software. Just name the macro, press record, record your macro, press stop, and you’re done. As for the delay in macros, you can either keep the input delay, ignore delay or insert a custom time delay in ms.

Once you’ve recorded the macro, select any button from the home screen, select T-Key from the top dropdown menu, and assign whichever macro you’d want on it. 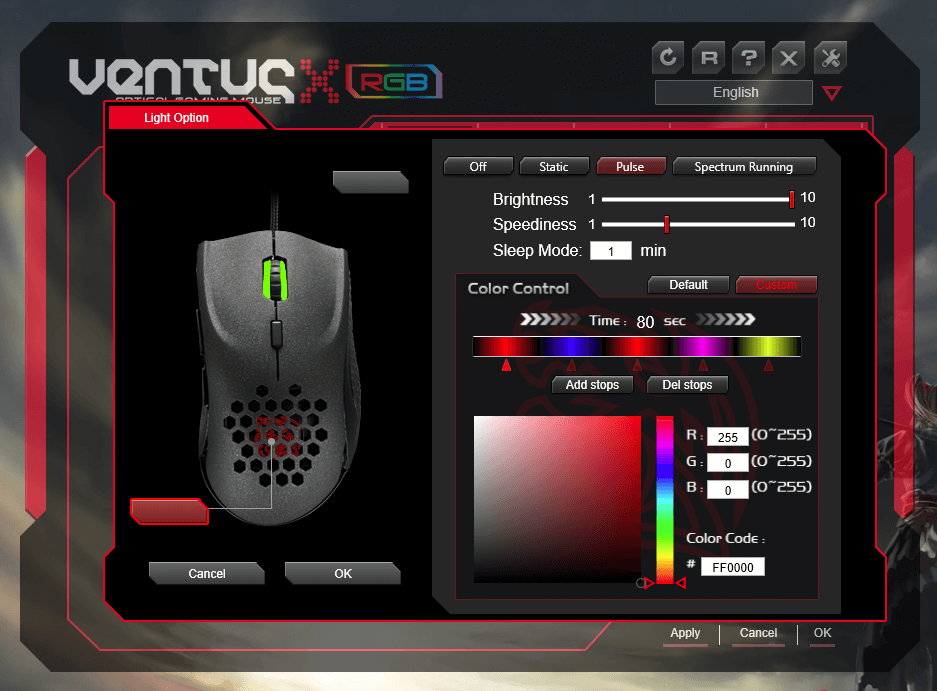 The light option is where you can customize the LED effects of the mouse. There is a total of 4 LED effects (including LEDs turned off) and two different LED zones. Check out the below video on how the LED effects on the Ventus X RGB looks likes.

As mentioned in the performance section, I’ve used the mouse for over 2 weeks, and I’ve got no complaints with it. I like how the mouse is very accurate, and there are no haywire movements to be noticed. And also, it works wonderfully on different surface. The grip of the mouse is great which is made even better with the rubberized textured sides of the mouse. The thumb, ring and pinky finger sits perfectly on the either sides. Also, the mouse glides on the surface very well. And with the weight adjustment system, you can make the mouse fit your need perfectly.

The Software is once again, laid out very well and is easy to use with everything you’ll need visible clearly on the home screen. And recording a macro and editing them is also very easy with the software.

The only thing which was a little off about the mouse was the size. This is something not everyone would feel, but since I prefer middle-sized mouse, it made me a little uncomfortable in intense gaming moments. Not that it’s a bad thing, it’s just that, if the mouse were a little shorter, this would’ve been a perfect mouse for me; which it is, if you take me out of the picture. Because there are people out there who like a big sized mouse and this one might be right up their alley.

Now the Ventus X RGB has an MSRP of $49.99 and taking a quick look at the market; you can find similar optical sensor mice in the same range, if not a little higher. And if we compare it against Tt eSPORTS own Ventus Z mouse, then I think the price is just about right for Ventus X RGB. In short, you can say it’s a cut-down, standard looking optical sensor version of the Ventus Z. So Tt eSPORTS has a meal for everyone’s taste and price.

In the end, I would like to rate the Ventus X RGB a 5 out of 5 stars and award it our Editor’s Choice award.